Annastacia Palaszczuk has insisted it was not her decision to stop a 26-year-old woman from attending her father’s funeral on Thursday.

The premier said Chief Health Officer Jeannette Young made the call to prevent Sarah Caisip from farewelling her father with her family in Brisbane.

The prime minister had asked Ms Palaszczuk to make an exception but the premier refused and accused him of bullying her.

‘I said to the Prime Minister, I would refer it to the chief health officer and I did that,’ Ms Palaszczuk said on Friday morning.

‘It’s her decision…. you’ve got to take the clinical advice here.

‘We’re dealing with a health pandemic. It is absolutely tragic. It is heartbreaking.’ 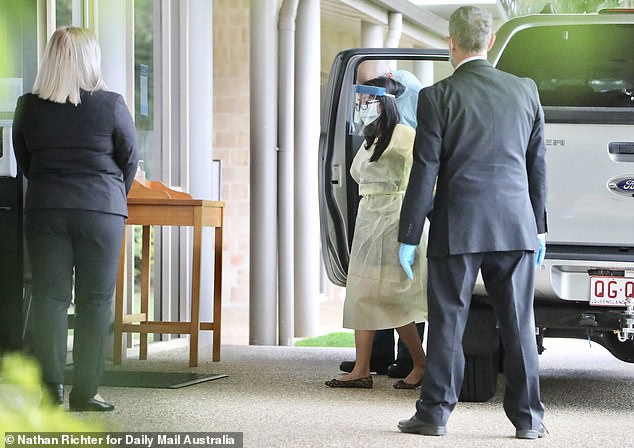 Sarah Caisip (in yellow) was allowed to have a private viewing of her father’s body, dressed in PPE and with security guards minding her. She was not allowed to greet her family

Ms Caisip, who lives in coronavirus-free Canberra, applied for an exemption last month to visit her sick father Bernard Prendergast in Brisbane – but it took 20 days to get approved and he died of liver cancer two days before her flight.

The young woman was banned from attending her father’s funeral on Thursday because officials believe she is a Covid-19 risk even though the ACT has had no cases for 60 days.

Up to 100 family and friends were allowed to attend the 2pm service in Mount Gravatt but instead of standing alongside them to farewell her father, Ms Caisip was only granted a private viewing of his body, surrounded by guards and forbidden from seeing her shattered mother and 11-year-old sister.

The gut-wrenching scenes came after Prime Minister Scott Morrison, who lost his own father in January, called Ms Palaszczuk and asked her to let Ms Caisip attend the funeral. He choked back tears as he described the case as ‘heartbreaking’. 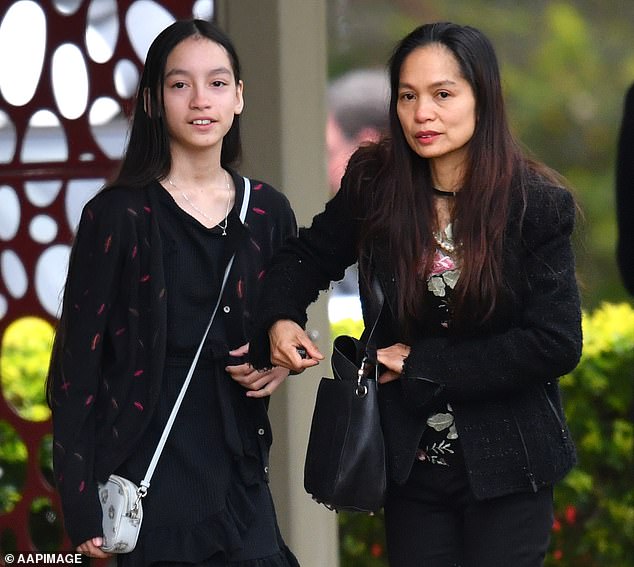 Ms Caisip was granted a private viewing of her father’s body, surrounded by security guards and without being allowed to see her mother and 11-year-old sister (both pictured)

The Queensland premier refused and then sensationally accused Mr Morrison of bullying and intimidating her. Ms Caisip said Ms Palaszczuk was ‘destroying my life’ and that she would never forgive her.

State Opposition leader Deb Frecklington, who also campaigned to let Ms Caisip go to the funeral, said she was ‘disgusted’ by the decision.

Queensland’s borders are closed to Victoria, New South Wales and the ACT. Premier Palaszczuk faces an election next month and the tough borders are popular with most Queenslanders.

The state’s chief health officer Jeannette Young, who is in charge of granting exemptions, said on Thursday afternoon that she is ‘very risk averse’.

‘We know that funerals are very, very high risk for transmission of the virus. The last thing I would want to happen is to have an outbreak at a funeral,’ she said.

Dr Young said Ms Caisip’s application for an exemption took 20 days because there are thousands submitted every day. 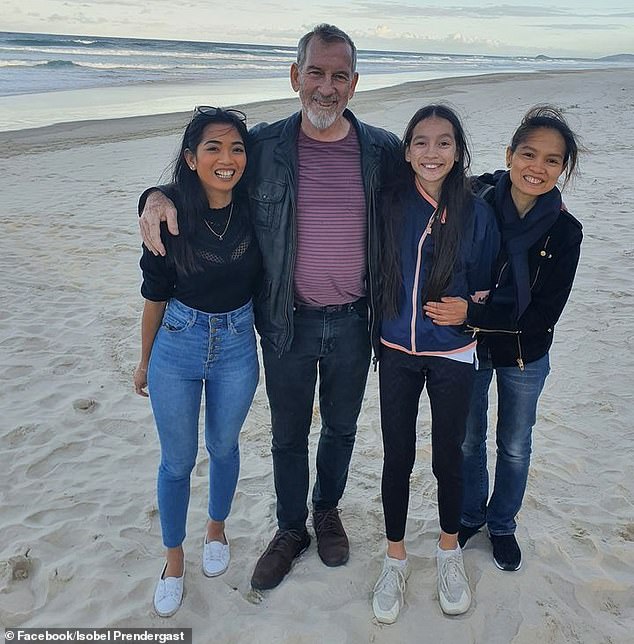 She said Canberra is declared a hotspot because ‘it is in the middle of New South Wales, we know there are cases around them.’

Premier Palaszczuk has come under fire for inconsistency on border rules after letting actors including Tom Hanks as well as hundreds of AFL players, WAGs and staff enter Queensland via special luxury quarantine while keeping ordinary families apart.

Hanks, who caught the virus in Australia in March, is undergoing quarantine in an undisclosed location set up by the film industry after returning to Queensland from the US to continue filming Baz Lurhmann’s Elvis Presley biopic.

‘I have given exemptions for people in entertainment and film because that is bringing a lot of money into this state,’ she said.

Queensland has been rocked by dozens of heartbreaking cases of families being torn apart and lives being shattered by the border closure.

One 60-year-woman was forced to quarantine in a hotel after brain surgery in Sydney and a mother lost her unborn twin after she was flown 700km to Sydney for surgery because an exemption allowing her into Queensland took too long.

The prime minister has been trying to persuade Ms Palaszczuk – and other premiers – to relax their tough border controls, but under Australia’s federal system he cannot overrule state governments. 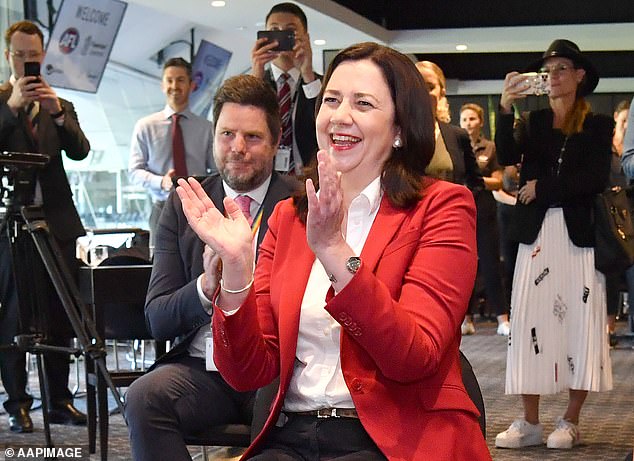