Top chefs have opened up about how their restaurants and careers fell to ruin when coronavirus hit.

Sydney’s hospitality industry was brought to its knees by COVID-19 restrictions, with about 70 per cent of businesses forced to cut staff or close their doors altogether.

Bleak images of the revered gastronomic geniuses sitting among their boarded-up venues were captured by commercial food and lifestyle photographer Rob Palmer. 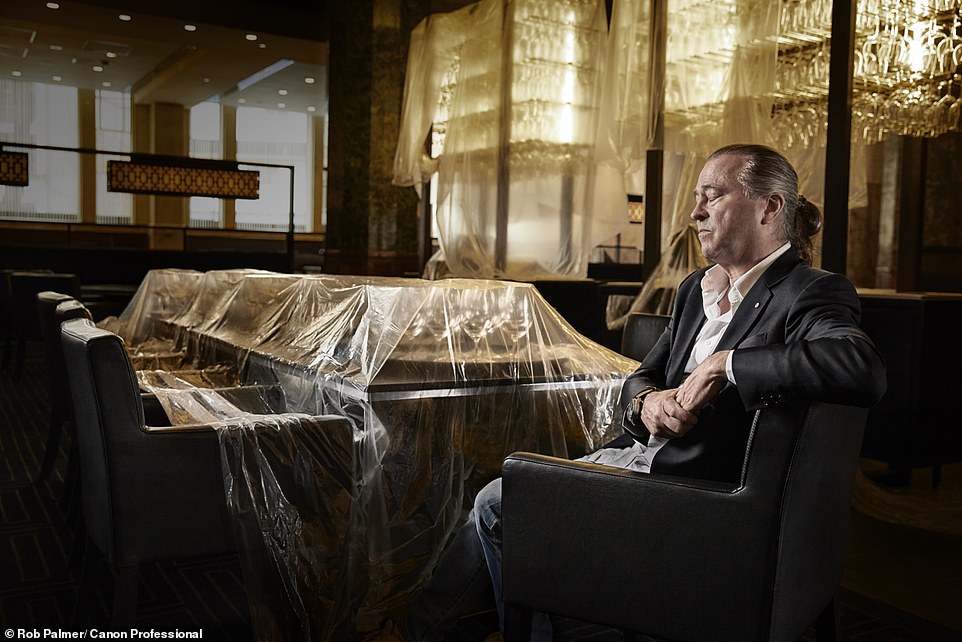 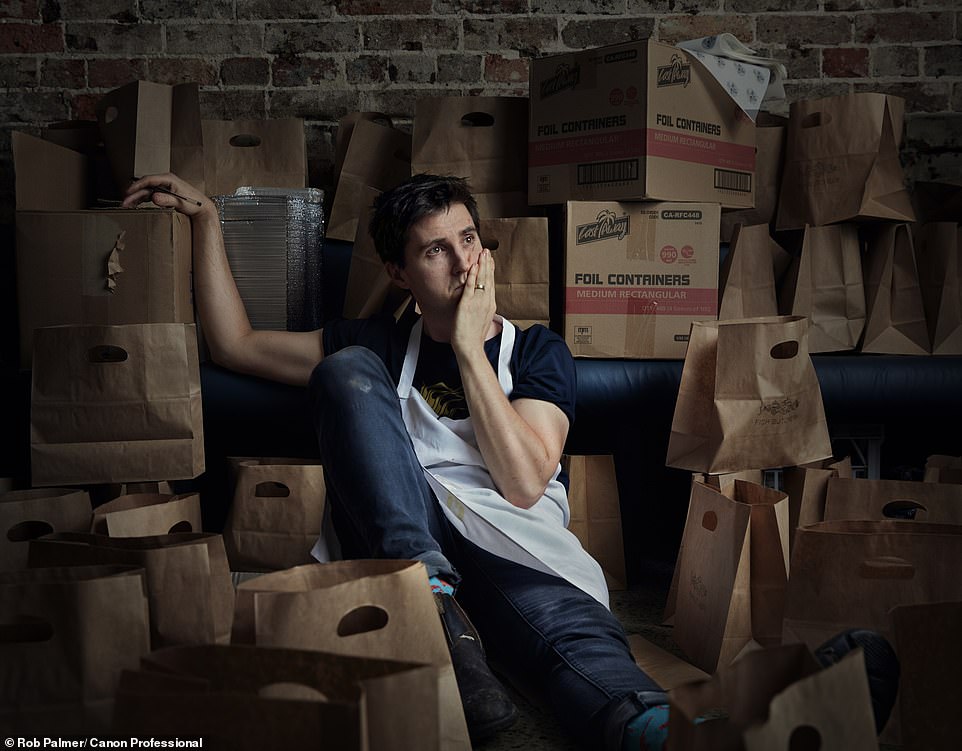 Josh Niland of Saitn Peter restaurant finds himself on the floor of Saint Peter, surrounded by brown paper bags, containers and other detritus of his quick pivot to takeaway meal

The photographer, who spent months documenting the restaurateurs’ spectacular collapse for portrait series ‘Industry SOS: The COVID-19 Time Capsule’, was able to capture the moment his subjects hit rock-bottom.

‘Neil [Perry], obviously to sit there and see his baby that he’d worked so hard at locked up and mothballed was devastating,’ Palmer told the Daily Telegraph.

Perry, who retired as culinary director of the 80 restaurants at Rockpool Dining Group in July citing COVID-19 as a reason for his departure, is pictured sitting with his eyes closed among the furniture in his Sydney venue.

While restaurants in all states except virus-addled Victoria have reopened, the business is believed to have lost about $40million last financial year. 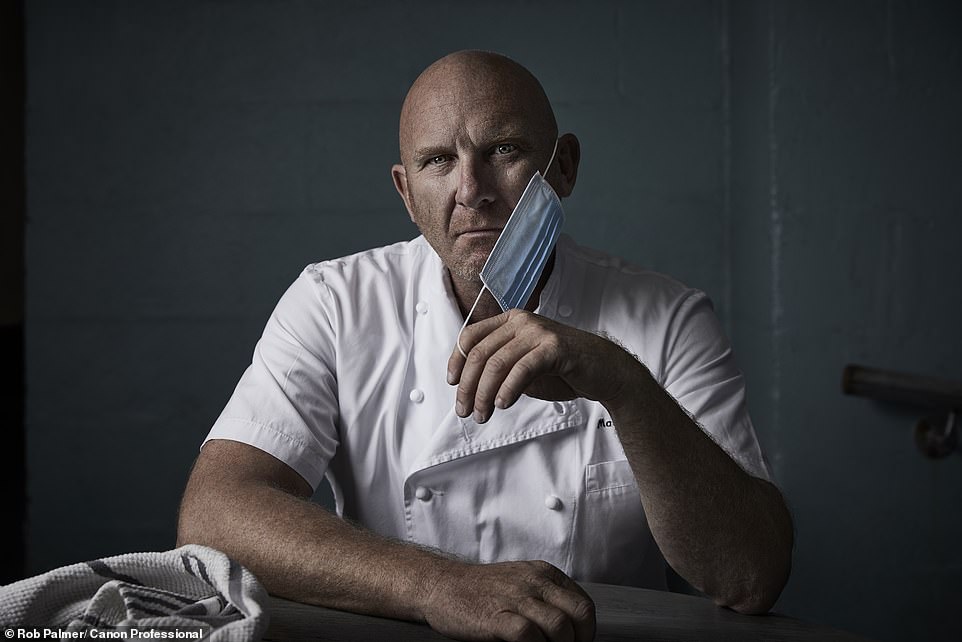 Chef Matt Moran photographed during the restaurant closures of Covid-19. At the time all of Matt’s venues from North Bondi Fish, Chiswick to Aria were closed for trading 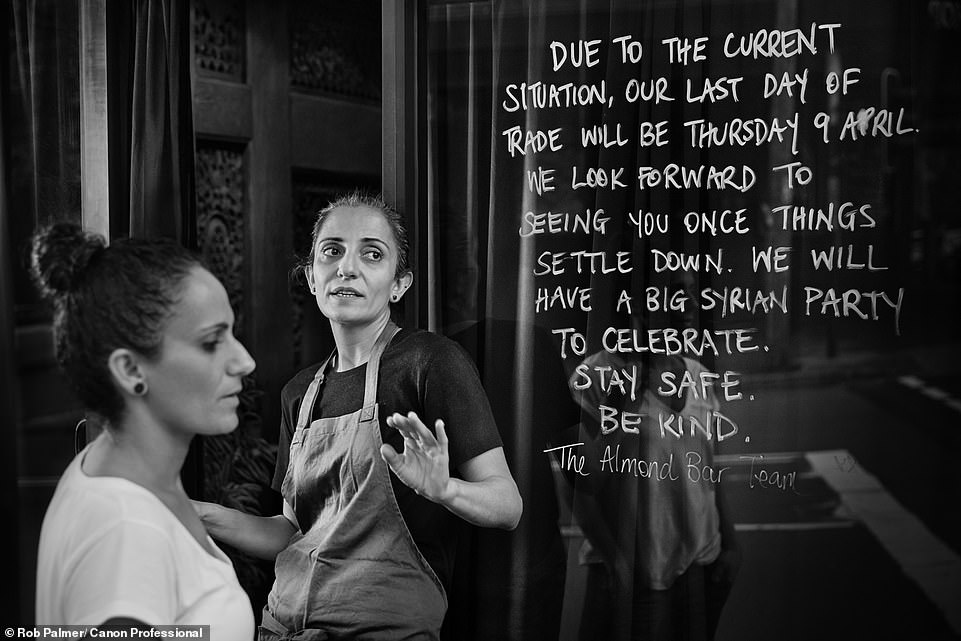 Carol and Sharon Salloum, sisters and owners of Almond Bar. They were recently outspoken about no longer offering Uber Eats as an option for customers because of a lack of profitability 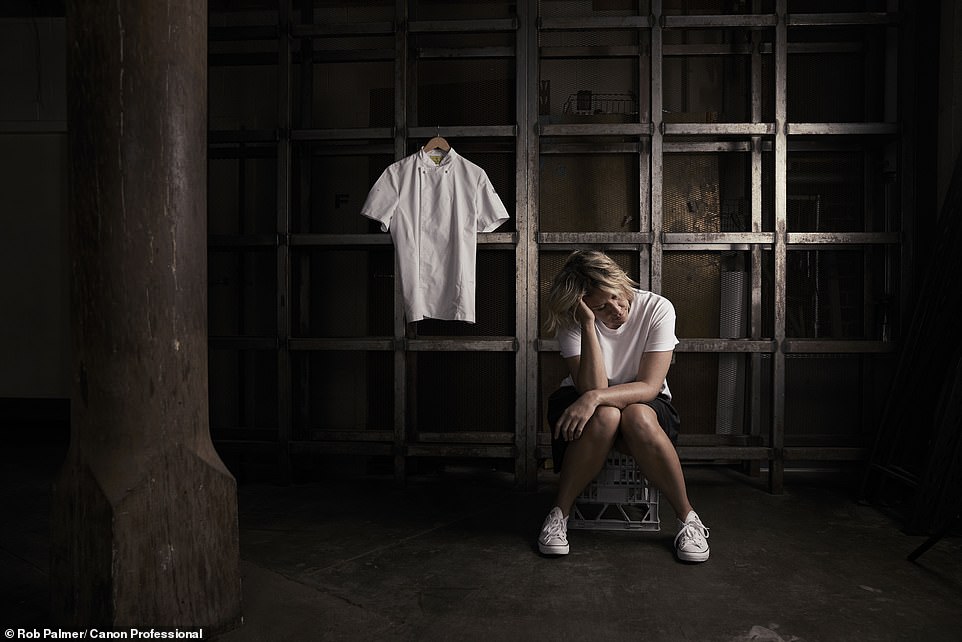 Challinor’s Surry Hills restaurant Nomad was destroyed in a fire in September 2019, only to collapse once again to the pandemic.

The chef was captured with her head in her hands, as her white uniform hung from an empty shelf behind her.

‘Nomad had had a fire the year before, they’d just moved the restaurant to a temporary location and a few weeks after opening, COVID hit so they shut for a second time in six months. [Jacqui Challinor] just lost everything’.

The venue will reopen in a temporary space in October. 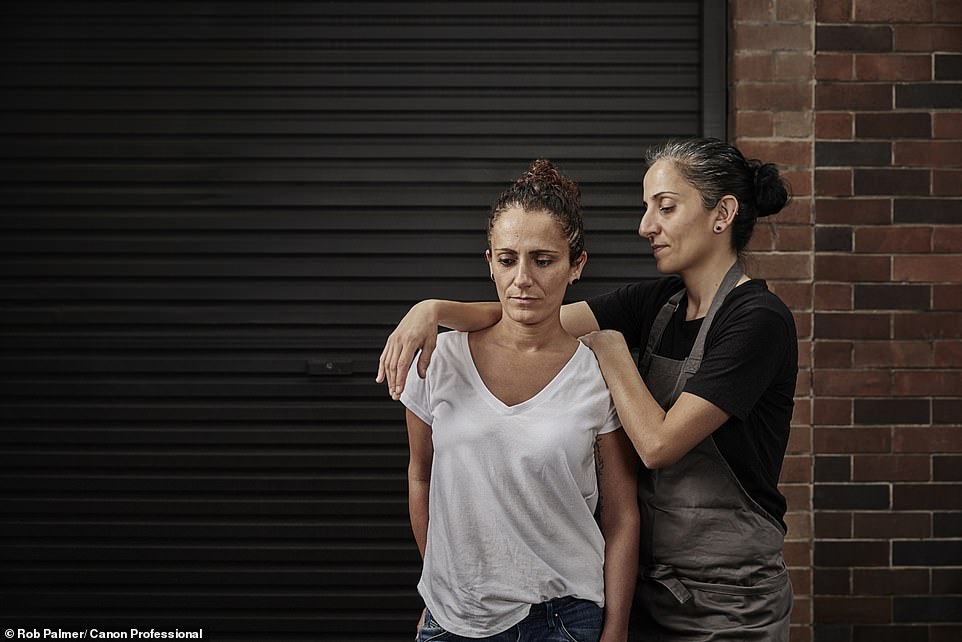 Carol and Sharon Salloum, sisters and owners of Almond Bar. With eat-in not being an option, they had to shut their doors 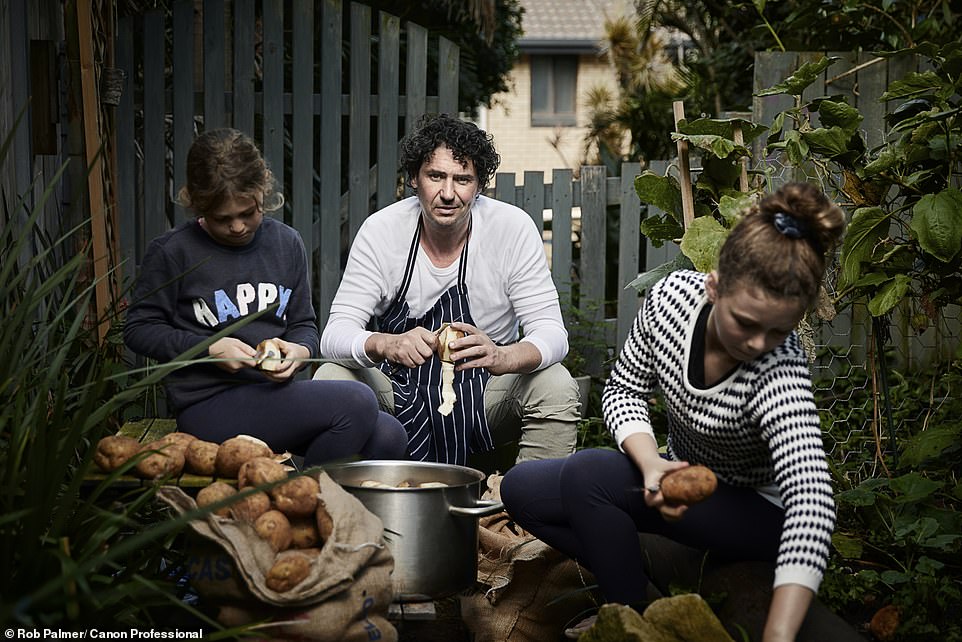 Chef Colin Fassnidge photographed during the restaurant closures. He is pictured peeling potatoes with his two daughters in preparation for the evening’s soup kitchen

While Niland quickly transformed his venue into a takeaway venue, Palmer said he was at odds with the decision.

‘He was saying three or four weeks ago, you would never have seen a takeaway container in my restaurant … He was really struggling with what the vision would be after COVID.’ 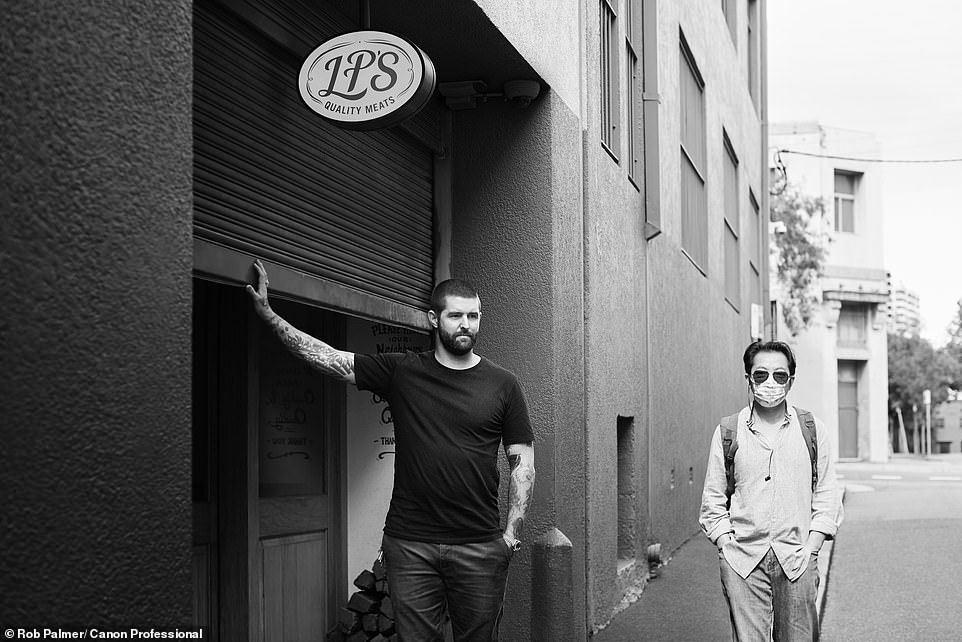 Pictured: LP’S Wuality  Meats in Chippendale, Sydney, which was forced to close temporarily during the pandemic

Celebrity Chef Matt Moran, who makes regular appearances on Masterchef Australia, was also pictured in his whites with a face mask.

Moran, who runs the iconic Opera Bar outside the Sydney Opera House, has pleaded with the NSW government to undo capacity limits for venues.

The Opera Bar has a capacity of 2,000, but can now only seat 300 under coronavirus restrictions. 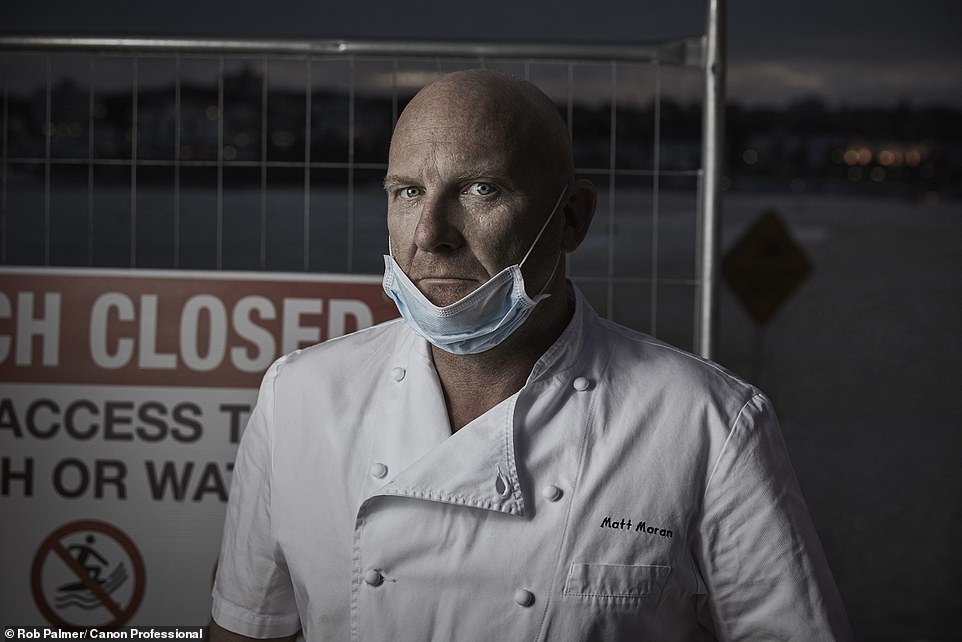 Chef Matt Moran photographed during the restaurant closures of COVID-19. Moran has pleaded with the NSW government to undo capacity limits

‘I’m not an expert but I think they should definitely be looking at it because Opera Bar is a big outdoor space. Limiting that to 300 – I think it’s pretty tough,’ he told the publication.

The photography series will be an ongoing project as part of the Powerhouse Museum’s Culinary Archive.