The Prime Minister is planning an advertising campaign to inform teachers and parents about coronavirus symptoms, it has been revealed.

As the testing fiasco continues, the government’s ad campaign will hope to stop pupils with runny noses and colds being sent home and told to get a test.

According to the Times, Boris Johnson‘s aides are working on the public information campaign in a bid to stop the system being overwhelmed. 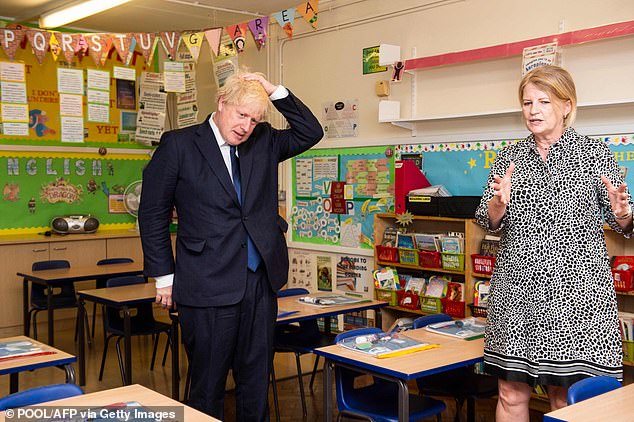 NAHT – the headteachers union – has released data which shows how the testing backlog is affecting schools.

The study shows four in five schools have children isolating because they can’t access a covid test.

The union collected data from 736 schools and found 82% of schools have children currently not attending because they cannot access a test to rule out covid-19.

Meanwhile 87% have children currently not attending because they are waiting for their test results.

Paul Whiteman, general secretary of school leaders’ union NAHT, last week wrote to the Prime Minister with mounting concerns about the impact the lack of access to covid-19 tests is having on schools, warning that the situation is becoming increasingly disruptive and unsustainable. Today’s figures add weight to those concerns.

Mr Whiteman says: ‘Tests for covid-19 need to be readily available for everyone so that pupils and staff who get negative results can get back into school quickly.

‘But we are hearing the same thing repeatedly from our members across the country – chaos is being caused by the inability of staff and families to successfully get tested when they display symptoms. 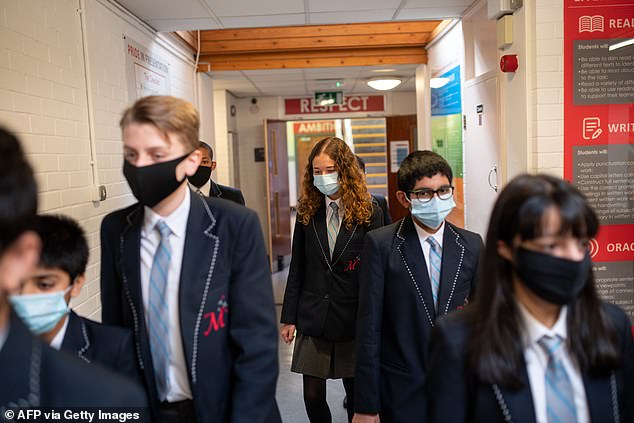 Year eight pupils wear face masks as a precaution against the transmission of the novel coronavirus as they walk along a corridor of Moor End Academy in Huddersfield, Yorkshire

‘This means schools are struggling with staffing, have children missing school, and ultimately that children’s education is being needlessly disrupted.

‘The government assured us that testing would be ready for schools reopening – it was one of their own key safety requirements to have in place to enable children and teachers to return.

‘It is in no way unpredictable or surprising that the demand for covid-19 tests would spike when schools reopened more widely this term.

‘And yet the system is in chaos. The government has failed schools and children.

‘It is unacceptable for this to happen when schools have put so much effort into getting their part of the plan right, and when pupils have had to endure so much uncertainty and disruption already.’

Two other unions representing headteachers and governors have also written to the Prime Minister urging him ‘take charge’ of Government efforts to ramp up testing capacity.

They say the inability of pupils an staff to get a swab have put some heads in an ‘impossible situation’ after grappling with symptomatic pupils and staff struggling to access tests.

This week it was reported that Britain’s testing fiasco has forced 740 schools to send children home.

Steve Chalke, the head of Oasis Academies Trust, made the alarming claim as Boris Johnson faced mounting pressure to get a grip over widespread lack of access to swabs.

Mr Johnson has declared the return of lessons a ‘national priority’ and the Department for Education earlier this week trumpeted that 99.9 per cent of schools have reopened. 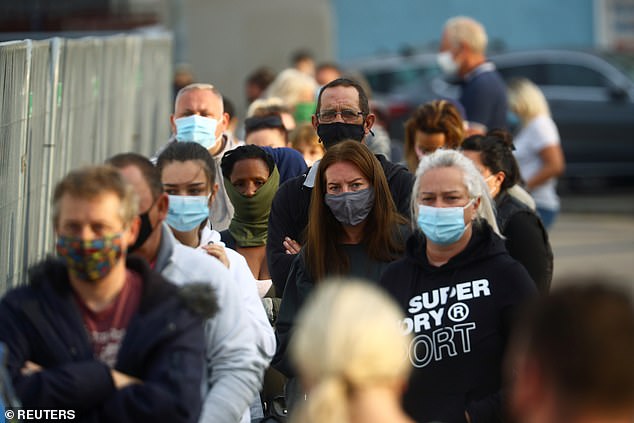 Three unions representing headteachers and governors have written to Boris Johnson urging him ‘take charge’ of Government efforts to ramp up testing capacity. Pictured above people queue for a test in Southend-on-Sea as the testing system continues to see high demand

Addressing concerns about testing when appearing before the Commons Education Committee on Wednesday, Education Secretary Gavin Williamson said each school was given 10 home-testing kits at the start of term and schools can now order more kits from the NHS directly.

Rob Halfon, chairman of the committee, asked if he could ‘guarantee’ that pupils and teachers who need local Covid-19 tests would be able to get them within 48 hours in the event of outbreaks.

But Mr Williamson replied: ‘Schools are, I think, the only organisation that actually has a set of testing kits that have been sent to them directly in order to be able to ensure that if they are in a situation where someone isn’t in a position to be able to get a test, then they actually have testing kits on site.’

Schools have been hit with Covid-19 cases since it became compulsory for pupils to return.

Some have closed their doors days after reopening while others have told whole year groups and classes to self-isolate for two weeks following confirmed cases.

A poll from the GMB union suggests only half (51 per cent) of school staff have had training on Covid-19 health and safety measures and working practices – including infection control and correct use of PPE.

Stuart Fegan, national officer of GMB, said it is ‘shocking’ that large numbers of school staff are missing basic health and safety training around Covid-19 since schools had fully reopened.

The lab is responsible for a quarter of all community tests across the UK after winning a £133 million contract in March.

Randox completed fewer than one in 10 tests on time on September 9 and has also been forced to throw away more tests than any other lab due to human error, according to a report in the Sunday Times citing leaked documents.

Staff alleged that tests from rugby players and coaching staff are given ‘priority status’ and are flown by helicopter to Antrim every week, with results usually available by 9am the next day. 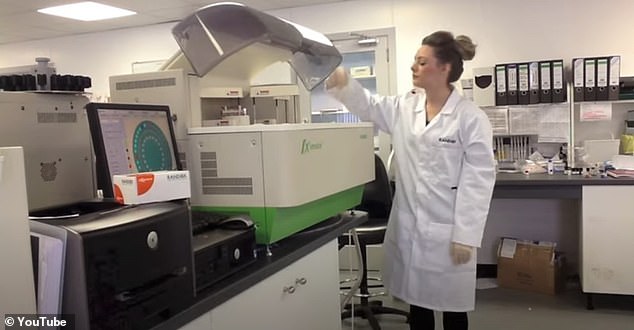 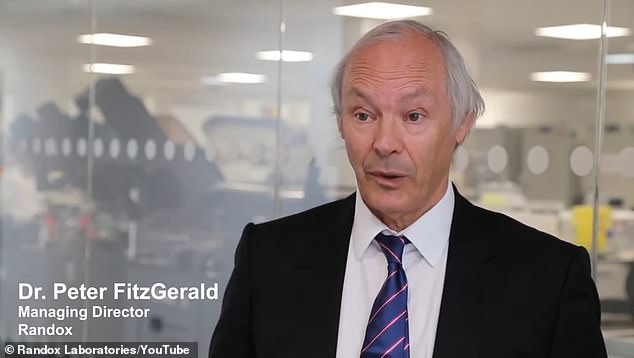 Randox Laboratories was founded by Dr Peter FitzGerald in 1982 and currently employs more than 1,500 people. Dr Fitzgerald pictured above

It is claimed that those travelling to Dubai receive similar special treatment. On September 2, Randox said it was ‘delighted’ to sign a new deal to screen airline passengers to Dubai.

It came on the same day 12,401 tests were voided without explanation.

Sources told the publication that the Northern Irish laboratory is unable to process tests quick enough after taking on too much work.

The firm is said be having major staffing problems – with 35,000 tests voided since the start of August.

The company, based in County Antrim, Northern Ireland, is said to be blaming leaks, damaged tubes and people sending urine rather than saliva, as the reason for voiding the tests.

In July, Randox was forced to recall half a million test kits after checks revealed they were not sterile.

The laboratory continues to play a key role in Covid-19 testing ahead of an anticipated second wave of cases.

Despite its alleged struggles, Randox is taking on commercial testing contracts and is reportedly currently in negotiations with Boots.

Randox Laboratories was founded by Dr Peter FitzGerald in 1982 and currently employs more than 1,500 people, with offices in Brazil, America and India among others.

The lab employs Conservative MP Owen Paterson as a consultant for £100,000 a year which easily surpasses his salary as an MP. 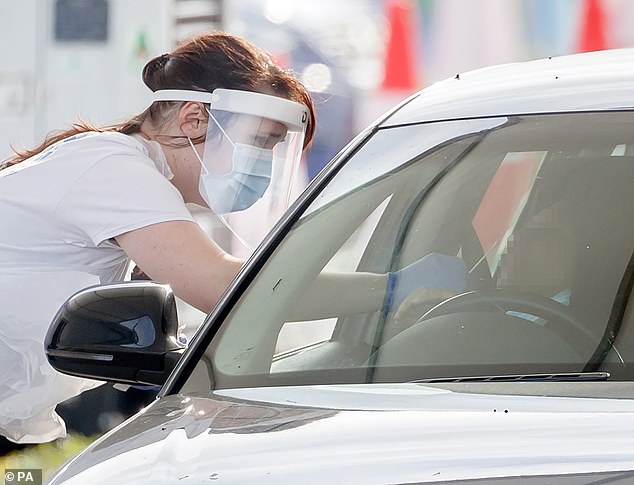 It comes amid growing anger over the Government’s testing ‘shambles’, as centres across the UK are facing huge queues and a backlog of people

Paterson has previously lobbied the government on behalf of the company. Randox has insisted its relationship with Mr Paterson had no role in it winning the multimillion contract from the government.

‘Randox takes great care in meeting all its contractual obligations and fully recognises the critical importance of meeting those obligations with regard to the national testing programme,’ the firm said in a statement.

‘Randox does not prioritise commercial work ahead of other work streams. We do not comment on commercial matters. We do not have a practice of voiding high numbers of test kits on a daily basis.

‘On average the Randox void rate is comparable across the programme.’

It comes amid growing anger over the Government’s testing ‘shambles’, as centres across the UK are facing huge queues and a backlog of people.

Parents in Bolton and Hull have complained of struggling to get tests for their children who have been sent home from school ‘with a runny nose’.

Meanwhile, others have reported driving for two hours from West Sussex only to be turned away without a test and even being told to make a 280-mile round trip from Durham to Edinburgh.