‘The historic action I’m taking today includes the first ever executive order to affirm it is the official policy of the United States government to protect patients with pre-existing conditions – so we’re making that official,’ the president told an audience in the swing state of North Carolina.

Trump’s action doesn’t have legal teeth, as his administration has backed a Texas-based lawsuit that could kill the law – the Affordable Care Act or Obamacare – that already makes it so insurers can’t refuse to cover or charge people more if they have a pre-existing medical condition. 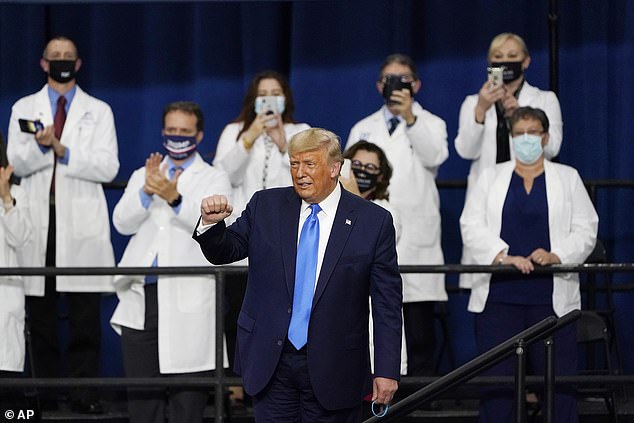 President Donald Trump signed an executive order Thursday that states protecting Americans with pre-existing conditions is official U.S. policy, a move that has little legal weight, but could shore him up with voters who say Joe Biden is better on the issue of healthcare 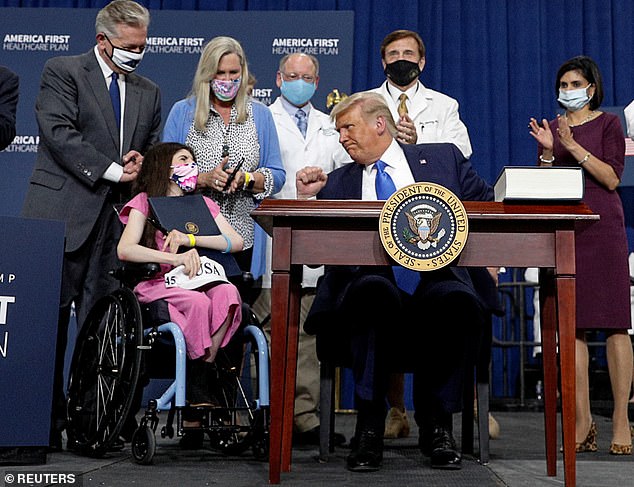 Trump signed the document during a stop in the swing state of North Carolina. At the same time, the Trump administration has backed a lawsuit that could kill Obamacare, which currently protects patients with pre-existing conditions from insurance companies

‘Unless there’s a law that prohibits the conduct in question, or unless the president is exercising a power that’s been delegated to him by Congress, his statements have no more legal weight than a tweet,’ Nicholas Bagley, a professor at University of Michigan’s law school, explained to Reuters.

‘It’s as if I was walking around with a memo that was title ‘Executive Order,’ and claimed that the policy of the United States is that everybody gets a cheeseburger on Tuesday,’ Bagley added.

Trump lags behind Democratic rival Joe Biden in national opinion polls, especially on the question of who would better handle healthcare.

The president has been criticized for failing to follow through on promises to lay out an alternative to Obamacare, with the White House, for weeks, saying a plan was to come.

He has also drawn fire for his administration’s response to the deadly coronavirus, which has killed more than 200,000 Americans.

In Charlotte, Trump made it clear he didn’t like the political optics.

‘Our opponents, the Democrats, like to constantly talk about it, and yet pre-existing conditions are much safer with us than they are with them and now we have it affirmed,’ Trump said. ‘It is affirmed, signed and done and we can put this to rest.’

That likely won’t happen as Democrats are using the Texas Obamacare case – which is headed to the Supreme Court in November after the election – as the principle reason a new justice to replace the late Ruth Bader Ginsburg shouldn’t be confirmed before voters head to the polls.

In a speech Sunday addressing the Supreme Court vacancy Biden said the American people ‘know their healthcare hangs in the balance in the middle of the worst health crisis in living memory.’

‘We’ve really become the healthcare party, the Republican Party,’ Trump countered Thursday. ‘And nobody knows that.’

In June, the Trump administration asked the Supreme Court to invalidate the Obamacare law that added millions to the healthcare safety net, a move that could scrap coverage during the coronavirus crisis.

‘If the Supreme Court strikes down all or a large part of the Affordable Care Act, what the president is making clear in this executive order is that it is the policy of the United States that people who suffer from pre-existing conditions will be protected against those pre-existing conditions in their insurance coverage,’ Azar told reporters earlier.

‘Or I won’t sign it,’ he said at the Thursday event.

In a call with reporters earlier Thursday, Health and Human Services Secretary Alex Azar said Trump was directing him via a second executive order to work with Congress to pass legislation banning surprise healthcare bills by the beginning of next year, and explore executive action to address the goal if the legislative bid fails.

Surprise bills occur when patients visit a hospital they believe is in their health insurance network but then are seen by a doctor or specialist who is out of network. Trump previously called on Congress to address the issue in 2019.

‘What the president is saying is that all the relevant players – hospitals, doctors, insurance companies – had better get their act together, and get legislation passed through Congress that protects patients against surprise medical bills,’ Azar said.