Donald Trump supporters packed themselves into a Nevada warehouse on Sunday night for the president’s first indoor rally in months as the campaign defended the decision to hold the event in violation of Nevada’s coronavirus rules.

Row after row of supporters crowded together with many attendees appearing to be in the elderly, more at risk population. Some are parents with young children.

Very few people in the crowd of a few thousands are wearing masks. Social distancing is impossible in the packed venue, where an American flag hangs behind the stage and cranes line the wall. Two large Make America Great Again signs hung on either side of the stage.

It’s so crowded some people have climbed onto the cranes while others are on an extended wall above the main floor.

The rally is a blatant violation of Nevada’s regulations on gatherings due to the coronavirus, which limits them to 50 people. 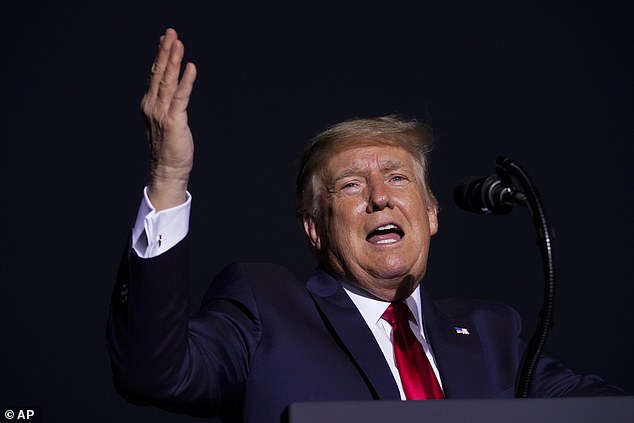 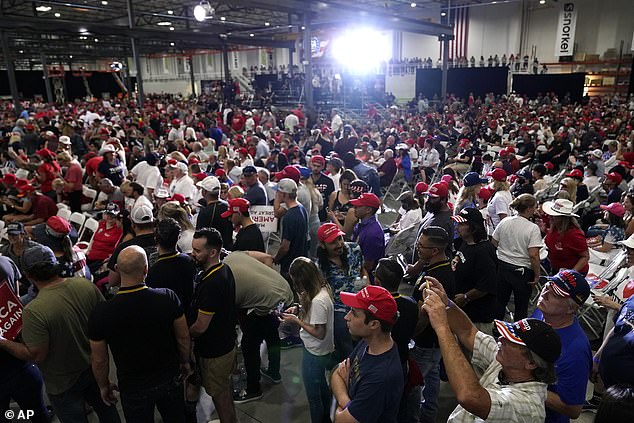 Supporters wait for President Trump to speak at his rally; they are crammed in together in a warehouse with no social distancing and few masks 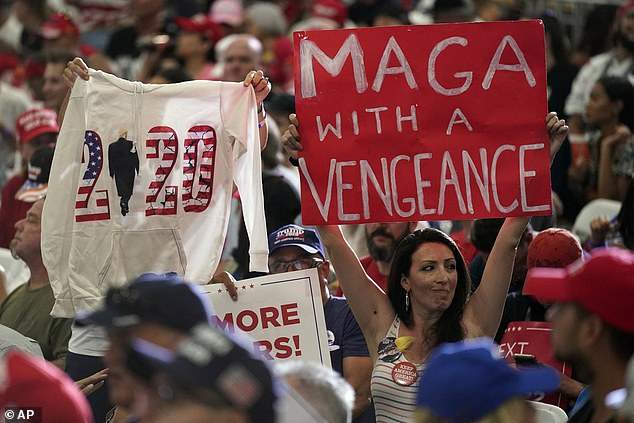 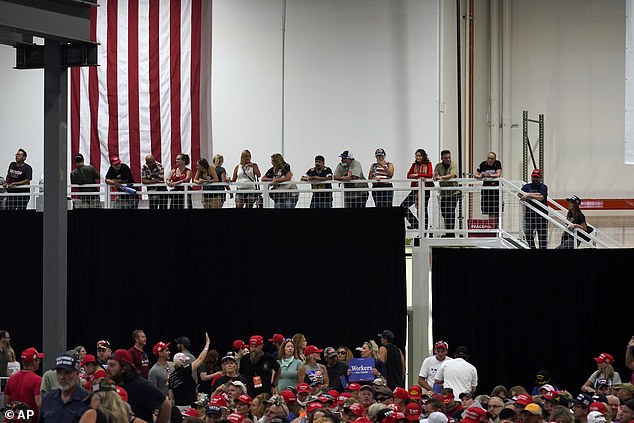 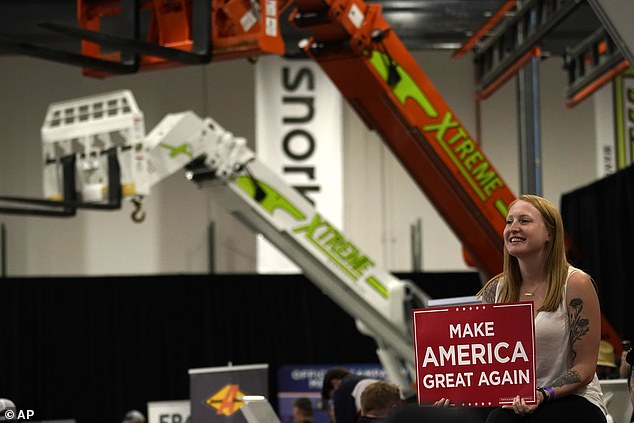 Cranes are on the sides and corners of the warehouse, with supporters sitting on them 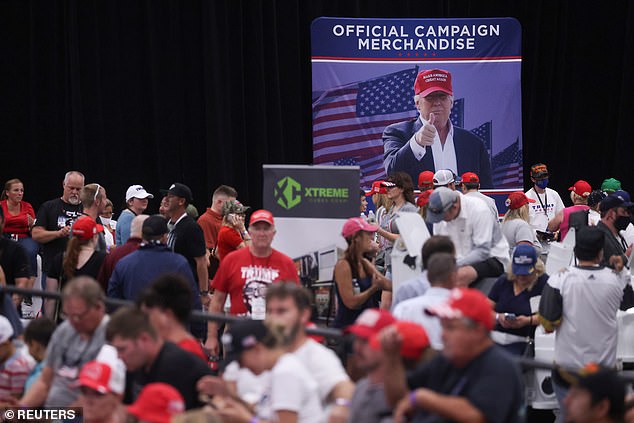 Supporters crowded into the venue, with many not wearing masks

The rally comes after the campaign saw its last indoor one in Tulsa result in several staffers and a few Secret Service agents test positive for COVID.

‘If you can join tens of thousands of people protesting in the streets, gamble in a casino, or burn down small businesses in riots, you can gather peacefully under the 1st Amendment to hear from the President of the United States,’ campaign communications director Tim Murtaugh said in a statement.

Trump is holding his rally in Henderson, Nevada, after state officials squashed his plans to hold an outdoor event at the Las Vegas airport because of restrictions on gatherings due to the coronavirus.

Instead, the campaign scheduled a visit to the the Xtreme Manufacturing facility, about 15 miles away from Las Vegas, where the president will speak at a warehouse there.

Henderson officials have warned Xtreme Manufacturing that it will be violating state regulations if the rally proceeds.

‘The City of Henderson has issued a compliance letter and verbal warning to the event organizer that the event as planned would be in direct violation of the governor’s COVID-19 emergency directives. Specifically, gatherings of more than 50 people in a private or public setting is prohibited,’ City of Henderson spokeswoman Kathleen Richards told CNN.

She said there could be a fine of up to $500 per violation.

‘Large live events must be approved by the Nevada Department of Business and Industry, Division of Industrial Relations and at this time, the City has not been notified that this event has been approved. The City may assess a fine of up to $500 per violation of the governor’s directives as well as suspend or revoke the business license,’ she said. 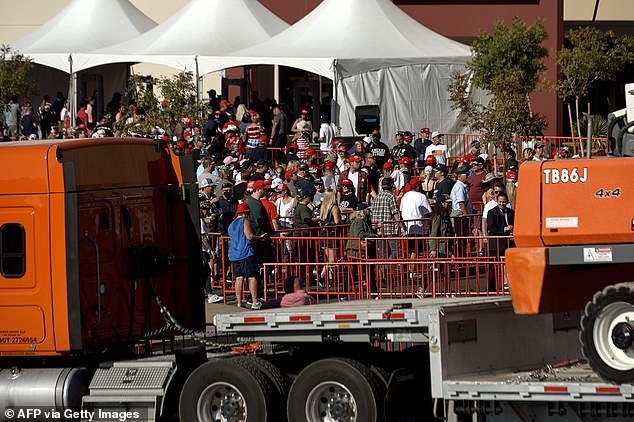 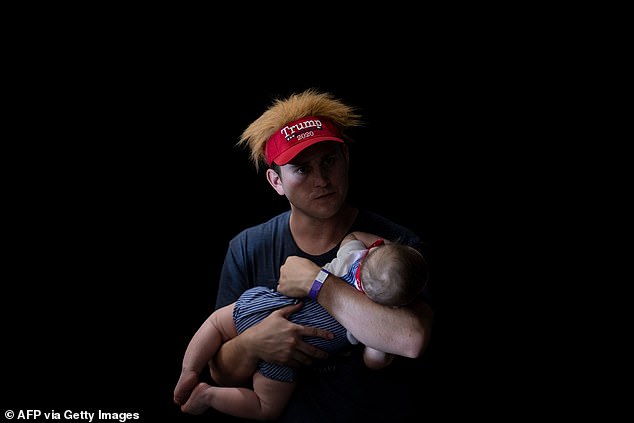 Casey Karlen and his son McKay Karlen wait for President Donald Trump during an indoor campaign rally at Xtreme Manufacturing in Henderson, a suburb of Las Vegas 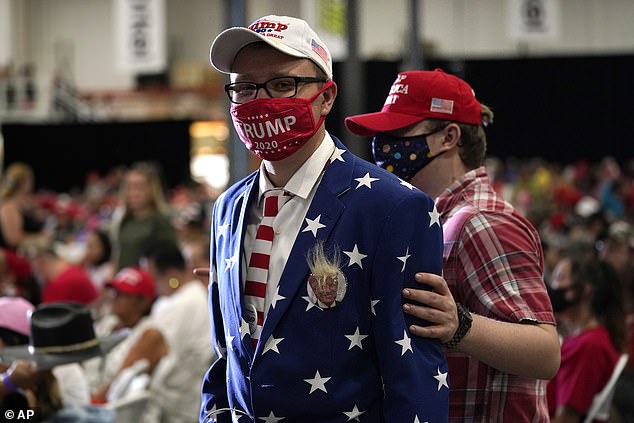 Trump railed against Democratic Governor Steve Sisolak for canceling his planned events for the critical battleground state. Officials also canceled Trump’s plans for a rally at the Reno airport but the campaign moved it 45 minutes away to a more conservative county so it could take place as planned.

‘The governor tried to stop us,’ Trump said on Saturday night. ‘He’s a political hack.’

‘He’s a guy who tried to silence us by not having this but our crowd turned out much bigger,’ the president bragged as the crowd at his rally roared their approval.

Trump’s rally in Minden, Nevada, on Saturday night also violated the limitations on gatherings with thousands in attendance, no social distancing and few wearing face masks.

Given the conditions for Sunday’s rally in Henderson, some of the TV networks have decided not to send their camera crews and correspondents inside the event. There will still be a pool camera inside to record it, CNN reported.

The Trump campaign noted every attendee at Sunday night’s event will get a temperature check prior to admission, be provided a mask they’re encouraged to wear, and have access to plenty of hand sanitizer.

But those same precautions were put in place in Tulsa three months ago, where eight campaign staffers and two Secret Service agents tested positive for coronavirus after Trump held a rally there in June. 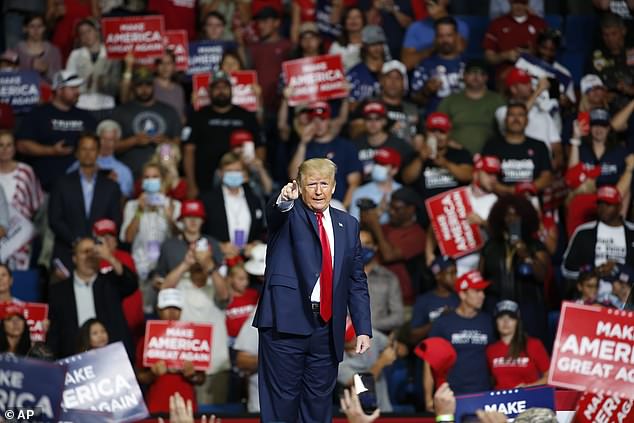 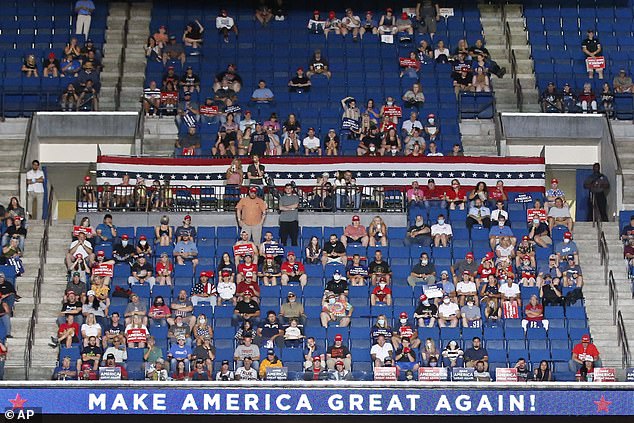 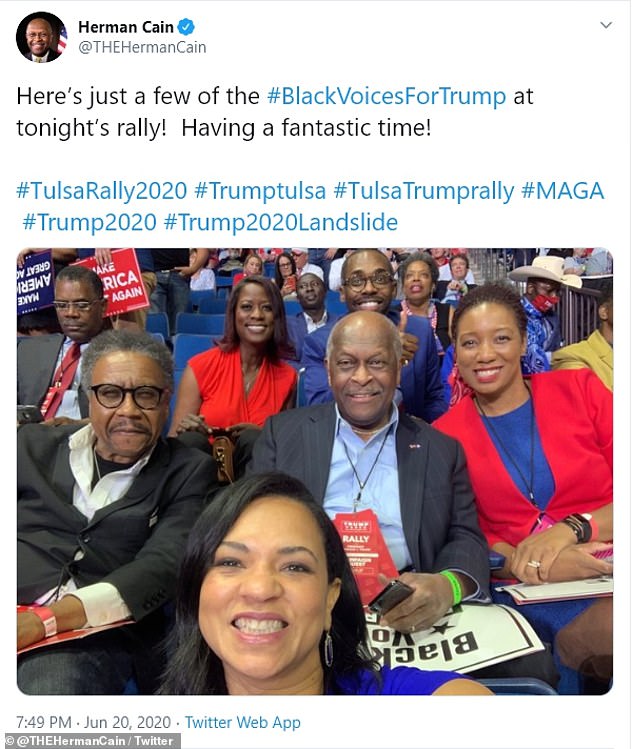 Herman Cain attended President Trump’s June 20th rally in Tulsa, where he tweeted the above photo; he died of COVID in July although his staff said it was unclear where he contracted the disease

All of the campaign staff that tended that June 20th rally in Tulsa ended up quarantining as a safety precaution as did several Secret Service agents who had contact with the two that tested positive.

Trump had pushed for a big campaign rally as part of his push to get Americans back to their normal routine after months of staying indoors due to the COVID pandemic, which has killed almost 200,000 Americans.

But the fallout from the Tulsa rally – which led to heavy criticism of the president for holding it and had state officials in Oklahoma complaining the event led to a spike of COVID cases in the state – eventually led to the replacement of Trump campaign manager Brad Parscale.

Health officials in Oklahoma warned ahead of time of the dangers of the indoor event.

White House Press Secretary Kayleigh McEnany defended the decision at the time, saying it’s ‘people’s individual choice as to whether to go’ and noted that the campaign handed out masks.

But the rally also proved an embarrassment to Trump both politically and personally.

The location was chosen as Oklahoma was far along in the reopening process after the COVID lock down. Plus it’s a deep red state that was expected to show Trump plenty of support and enthusiasm.

The president and Parscale had both bragged that one million tickets had been requested for the event, only for the 19,000-seat BOK Center to have 6,200 people in it, according to Tulsa officials.

Scenes from the event showed row after row of empty blue seats staring back at Trump in what was supposed to be his campaign comeback.

The high number of ticket requests led the campaign to plan for an outdoor event to handle the expected overflow crowd – only have to cancel it at the last minute when people did not show up.

Additionally Herman Cain attended the rally. He died of the coronavirus a month later. The White House said he did not contract it at the Tulsa event and Cain’s staff said it was not clear where he had gotten the disease.

Trump’s rallies in the aftermath were outdoors, usually at airport hangers, until Sunday when he will hold his indoor event.

The campaign has attendees sign a health waiver in case they get sick at any Trump gathering.