A car has ploughed through a barrier and plunged at least 20 metres down a cliff face before landing on the beach below.

Emergency services were called to Bar Beach in Newcastle at about 10.25am following reports that a car had gone off a cliff.

Police have been told the white Volkswagen Golf drove off the cliff from the top grass car park and landed on the sand.

A 40-year-old woman and her infant child, who were on the beach, were struck by the car. 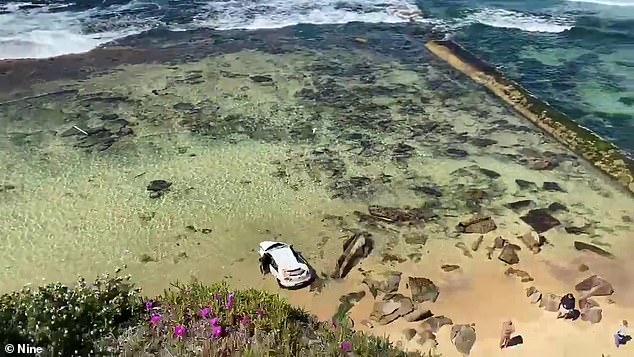 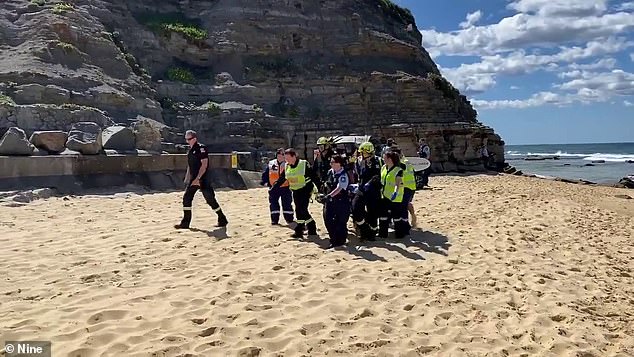 Ambulance crews were called to Bar Beach in Newcastle just after 10.20am on Thursday to treat two elderly patients and a child

The woman sustained possible leg fractures and was taken to John Hunter Hospital for treatment. The child suffered minor scratches.

The driver of the Volkswagen, a 32-year-old woman, was treated at the scene for minor injuries before being taken to the same hospital where she will also undergo mandatory testing.

Police are investigating reports there was a male passenger in the Volkswagen.

Shocking photos show the wreckage of the car stuck shallow water on the beach, as two people were taken away by paramedics in stretchers.

A witness said the car had been ‘airborne’ before hitting the fence.

‘I was walking up towards the car park. This white car came straight through the car park. It was airborne and it was not slowing down,’ the witness told the Newcastle Herald.

‘I heard a bang when it hit the fence. Then it disappeared.’

Anyone who witnessed the incident, or has dashcam footage, is urged to come forward.

The car park has been cleared and members of the public are being advised to avoid the area.

A retrieval operation is underway to remove the vehicle from the beach. 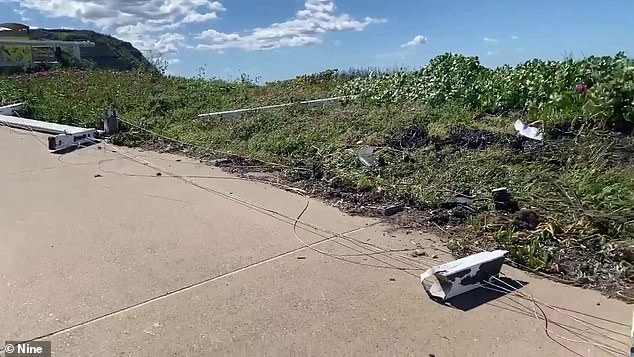