Five thousand people in California‘s Napa Valley wine growing area have been ordered to evacuate their homes or told to prepare to, amid rapidly-spreading wildfires which have destroyed at least one winery.

Chateau Boswell, a 40-year-old family-run winery near St Helena was on fire on Sunday night, as firefighters desperately tried to put out the blaze.

High winds, gusting at 55mph, were hampering attempts to put out the Glass Fire, which broke out at 3:50am on Sunday and has so far burned 2,500 acres near St. Helena.

St. Helena, around 15 miles north of Napa, has been the site of prized wineries since the 1860s. The area is home to Beringer, one of California’s oldest continuously operating wineries, founded by Jacob Beringer and his brother Frederick in 1875. Some wines produced in the region sell for more than $460 a bottle.

Fire officials look on as the Glass Fire burns closed to Viader Vineyards and Winery in Deer Park, Napa County, on Sunday 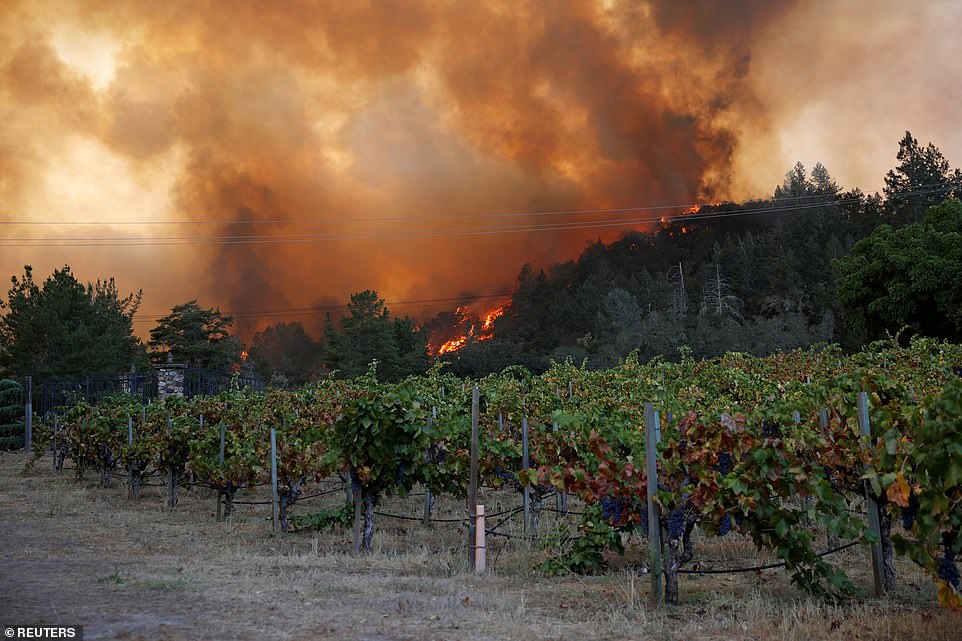 The area is also flanked by the LNU Lightning Complex, which was sparked on August 17 and has destroyed 363,000 acres. It is now 98 per cent contained – unlike the Glass Fire, which is entirely uncontained.

A further 1,370 homes and 3,425 people are in the larger evacuation warning zone.

Some were evacuated from their homes before dawn, and evacuations continued throughout the day.

Among those evacuated were 50 patients at Adventist Health St. Helena hospital in Deer Park.

A 48-hour red flag warning, that started at 9pm on Saturday and was expected to last until 9pm on Monday, was the basis for the hospital evacuation and extensive residential evacuations.

She said that many of the communities were isolated and reached via narrow, winding mountain roads, which made the decision to evacuate more pressing.

‘There’s been discussion of relative humidity in elevations in the fire area as low as 0 per cent — and kiln-dried wood is at 9 per cent,’ Upton said.

‘That factor alone, without the winds, would drive dangerous fire behavior.’

The spectacular 100-year-old Davis Estate winery, with its beautiful wooden tasting room, was considered under threat.

So too was Reverie, founded 25 years ago on a lush Napa hillside.

Cal Fire used a DC10 plane, which was capable of dropping almost 10,000 gallons of retardant in eight seconds on each pass.