A 15-year-old boy confessed to fatally shooting his uncle, a beloved Miami high school football coach, while staying over his house and robbing him of $7,000 in cash, police said.

Charles Alexander, who is said to have a history of mental illness, has been charged with second-degree murder and armed grand theft in the killing of 46-year-old Corey Smith on Monday.

Prosecutors in Miami-Dade County plan to charge him as an adult, the Miami Herald reported.

Alexander was staying at Smith’s home in West Little River when he used the football coach’s own 9mm Beretta handgun and shot Smith dead in a den, according to police. 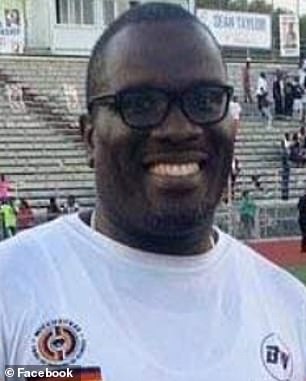 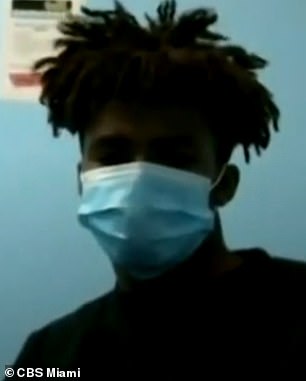 Corey Smith (left), 46, the head football coach at Miami Senior High School, was shot and killed by a close relative, Charles Alexander, 15, in his home in West Little River, Florida, on Monday, according to police. Alexander is seen right during an appearance in Miami-Dade juvenile court on Friday 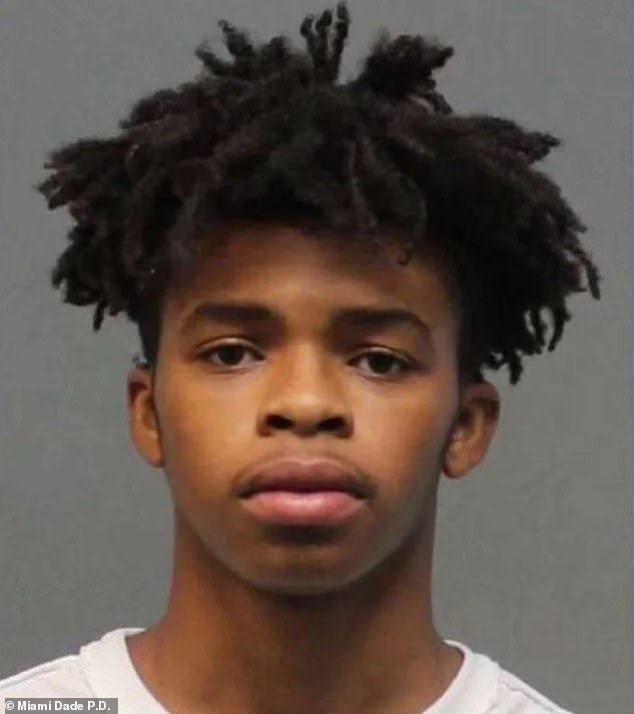 Alexander, who is said to have a history of mental illness, will be tried as an adult by prosecutors in Miami-Dade County, it has been reported. He was arrested on Thursday after his mother called police and told investigators that he confessed to the shooting

Surveillance footage showed that Alexander was the only person at home at the time of the shooting, it is alleged. Police also said Alexander confessed to the shooting to his mother.

Investigators also found more than $7,000 in cash belonging to the coach inside a pair of jeans hidden in Alexander’s black bag, police said.

During a hearing in Miami-Dade juvenile court on Thursday, a judge ordered Alexander be held in secure detention.

Charles Alexander is the son of 41-year-old Lamar Alexander, the convicted felon who was shot and killed after carjacking a UPS truck and leading police on a high-speed chase last November. 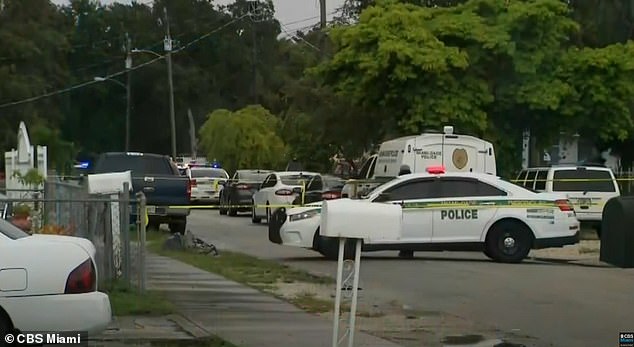 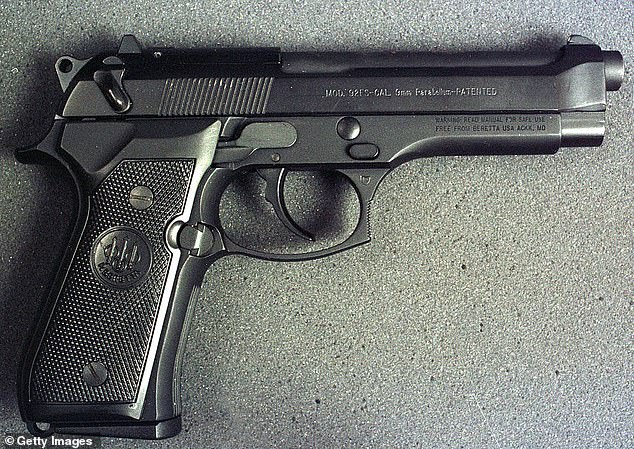 According to investigators, Alexander shot Smith with the coach’s own 9MM Beretta gun (like the one seen in the above file photo)

Alexander and another ex-con who took part in the armed robbery, Ronnie Jerome Hill, 41, were killed.

The UPS driver they took hostage, Frank Ordonez, 27, and another motorist who happened to be in the area, Richard Cutshaw, 70, were also killed.

The entire incident was caught on television.

Corey Smith and Lamar Alexander were technically cousins, but they were so close growing up that they were seen as brothers.

Smith’s loss is a blow to the community, which knew him as the head coach of the Miami Senior High School football team.

‘In life, you gotta make better decisions,’ Smith said of Lamar Alexander the day after the hostage shootout.

‘We weren’t raised like that. I love my brother, but he’s been making bad decisions his whole life.’

Relatives told the Miami Herald that Corey Smith hadn’t seen his nephew since his father was killed.

‘He asked to come over,’ Corey’s wife, Amina Smith, said. 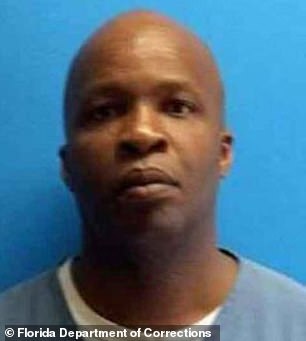 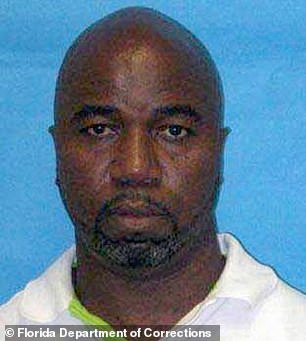 Charles Alexander is the son of Lamar Alexander (left). Lamar Alexander, 41, and Ronnie Jerome Hill, 41, (right) both of Miami-Dade County, were killed after they carjacked a UPS truck and took the driver hostage last December 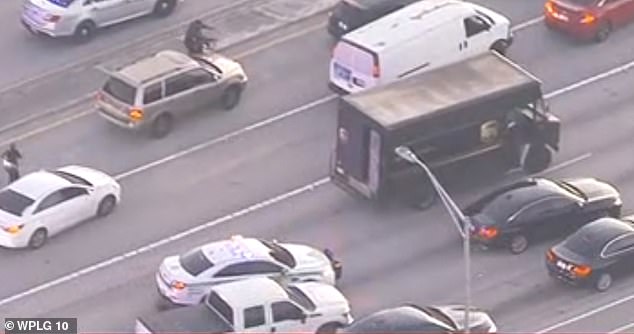 Lamar Alexander and Hill, two ex-cons, were armed when they tried to rob a jewelry store. They are pictured above in a hijacked UPS truck during a shootout with police after a high-speed chase from Coral Gables, Florida, ended when the vehicle got stuck in traffic on a highway near Miramar on December 5

Richard Cutshaw, a 70-year-old union representative who was two years away from retirement, was fatally struck in his car

‘We hadn’t seen him since his dad passed. Corey picked him up Sunday night and he spent the night.

Police were called to Smith’s home after at least three gunshots were heard by neighbors.

When investigators interviewed the teen, he told them he was studying at the time of the shooting. After being interviewed for several hours by Miami-Dade Police Department, Alexander was allowed to go home. 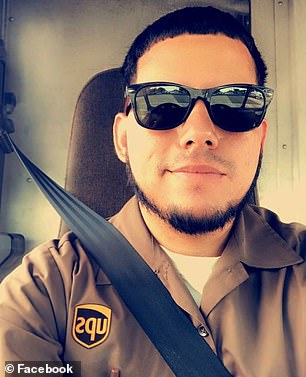 Frank Ordonez, a 27-year-old father of two young girls, was killed after the two ex-cons carjacked his truck and held him hostage

Two days later, Alexander’s mother called the police and asked to speak to them.

According to investigators, she was ‘in fear of the defendant’ and said that her son ‘confessed to her that he had killed his uncle.’

The police arrest report indicated that the murder weapon was found in a trash can outside their home.

Charles Alexander has had a difficult recent past that includes run-ins with the law.

In May 2018, he was arrested for allegedly making a bomb threat at a middle school in Allapattah.

Investigators said school administrators received ‘numerous phone calls’ stating that a bomb would be detonated unless the school was evacuated.

The phone calls were traced to a phone on campus. Charles Alexander and two others were arrested.

But his case, which was brought before juvenile court, stalled due to mental health problems.

‘There are many juveniles who also suffer from early childhood trauma, learning deficiencies, and mental illness and the criminal justice system, can no longer afford to allow them to fall through the cracks,’ Alexander’s attorney, Rod Vereen, told the Herald.

‘If the allegations are proven true, that my client committed this unfortunate crime, then here’s a prime example of the system failing this child.

‘Should he have been involuntary committed over the past couple of years, so he would not have been a danger to the community?

‘If the facts are true, who failed whom?’