Kamala Harris turned heads when she wore Timberland boots to visit the devastation of the California wildfires this week, but Twitter users slammed the Democratic Vice President candidate for copying Melania Trump‘s style.

The California senator and Governor Gavin Newsom walked through the wreckage of the Creek Fire and toured a Red Cross evacuation center on Tuesday.

As Harris talked about the impact of climate change on the wildfires, she caught the attention of social media users for her outfit.

She sported camel colored Timberland boots with a white shirt, green jacket and jean as her power outfit, but some angry social media users accused her of wearing the same shoes and a similar outfit Melania has worn before.

The First Lady wore similar wheat-colored Timberland boots in 2018 during a trip to the Al Asad Air Base to visit American troops in Iraq. 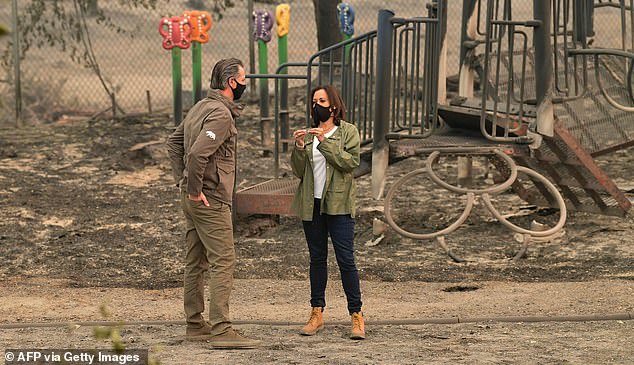 Kamala Harris turned heads when she wore Timberland boots to visit the devastation of the California wildfires this week, but Twitter users slammed the Democratic Vice President candidate for copying Melania Trump’s style 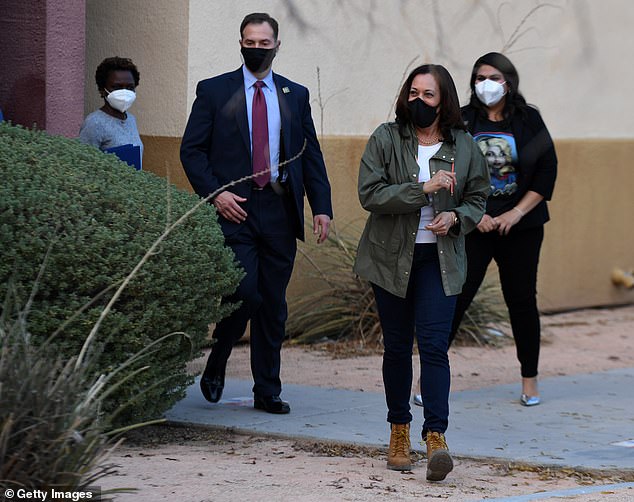 Harris sported camel colored Timberland boots with a white shirt, green jacket and jean as her power outfit on Tuesday 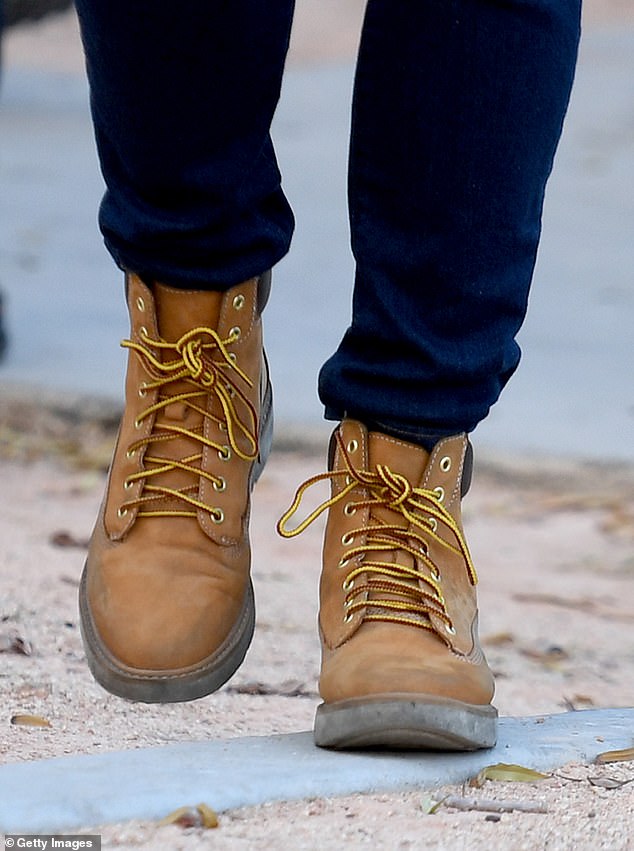 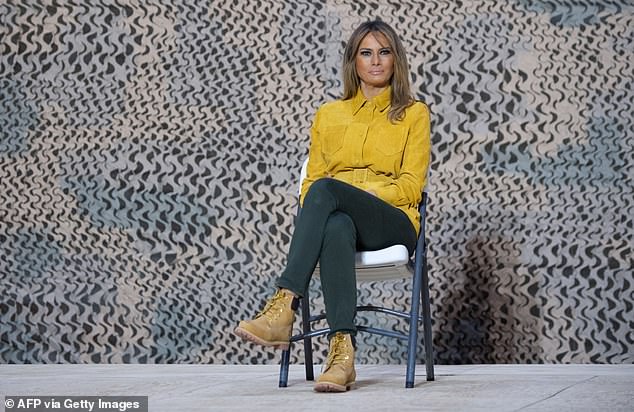 In one of her outfits from the trip Melania wore a green jacket, white top and white jeans with the iconic camel boots.

‘I still remember the press blasting Melania for wearing Timberlands ,weird how they quickly change their minds!’ another added. 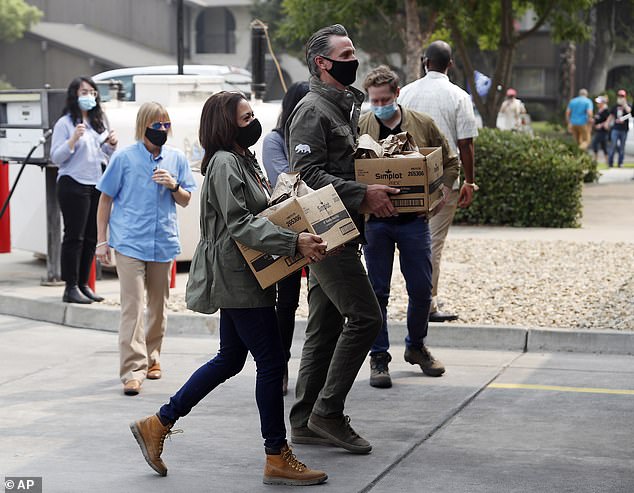 Harris along with California Gov. Gavin Newsom brought food to firefighters in Fresno on Tuesday 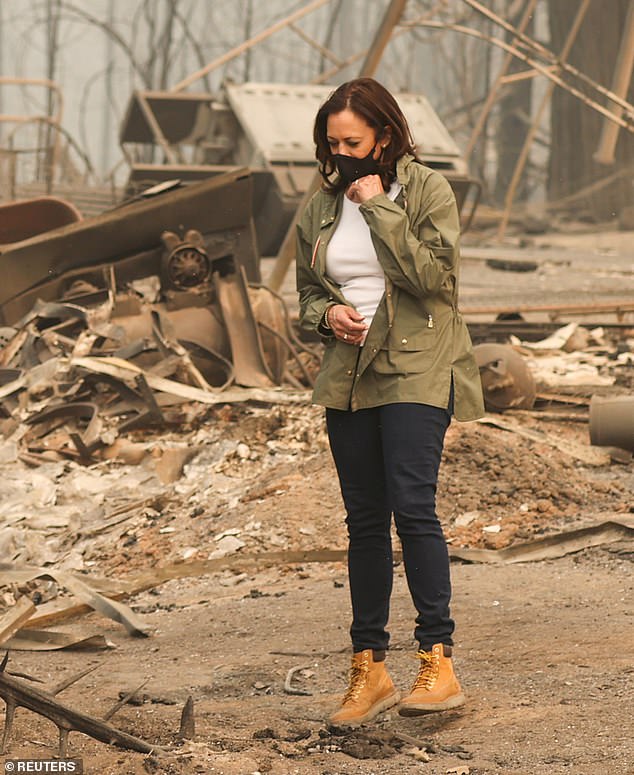 Harris pictured walking through the wreackage left behind in the Creek Fire in Aubery, California on Tuesday wearing the iconic Timberland boots 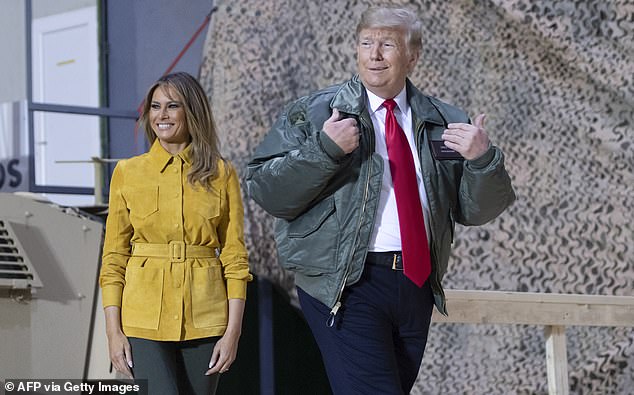 Melania Trump and Donald Trump pictured during their visit to the Al Asad Air Base in Iraq on December 26, 2018 where she wore the Timberland boots 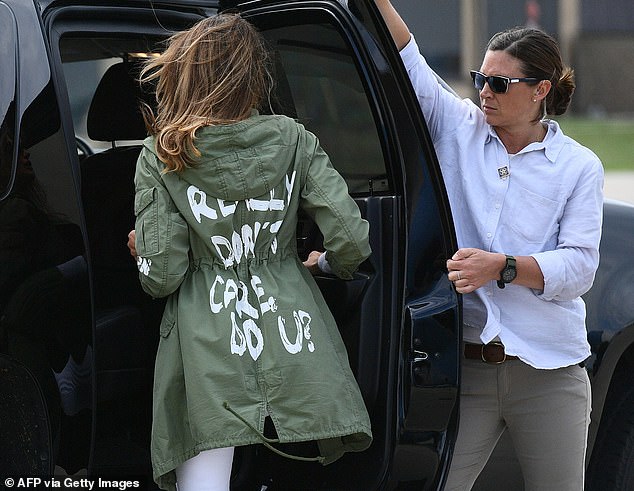 Melania has been heavily criticized for some of her fashion choices. In June 2018 she sparked outrage for wearing a Zara jacket with the phrase, ‘I really don’t care, do u?’ while visiting detention centers holding migrant children at the border in Texas.

One Twitter user blasted how the media praised Harris for her ‘cool’ look with the shoes, but reminded the public how social media blasted Melania for her choice of the same shoes in 2018.

‘Melania Trump gets mocked for wearing Timberland boots while visiting troops,’ one article from 2018 said. While one from this week said, ‘Kamala Harris may have made Timberland boots cool again’.

Melania Trump has faced intense scrutiny for her fashion choices.

She was eviscerated for wearing ‘storm stiletto’ high heels during a visit to tour the damage in Houston, Texas in the wake of Hurricane Harvey.

She also sparked outrage in June 2018 for wearing a Zara jacket with the phrase, ‘I really don’t care, do u?’ while visiting detention centers holding migrant children at the border in Texas.

She wore that after President Donald Trump signed an executive order to separate migrant children from their families at the border. 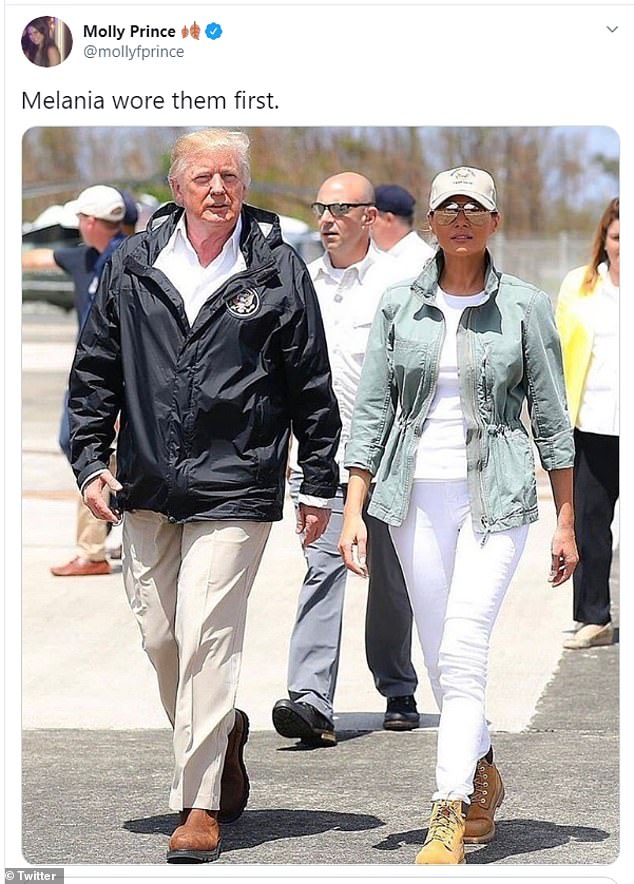 Twitter users slammed Harris for copying Melania’s style as she was spotted wearing a green jacket, white shirt, jeans and Timberland boots in Iraq in 2018, an outfit not so different from what Harris wore Tuesday 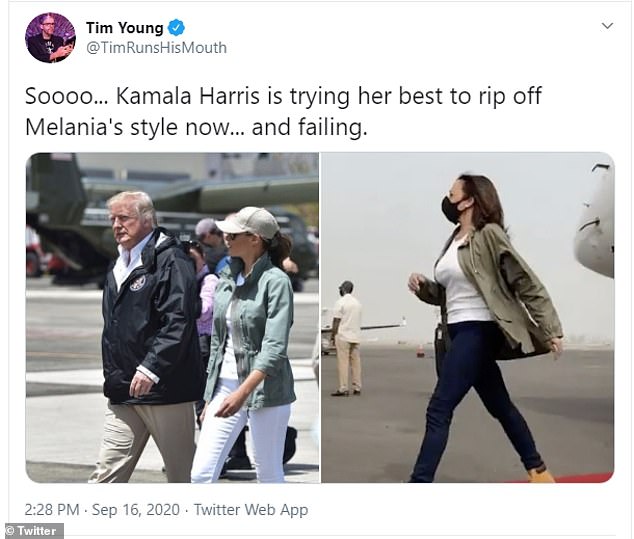 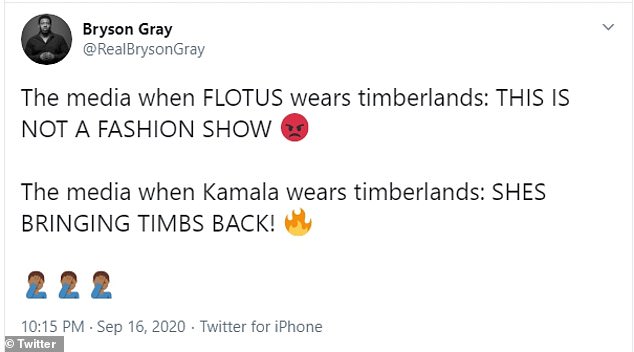 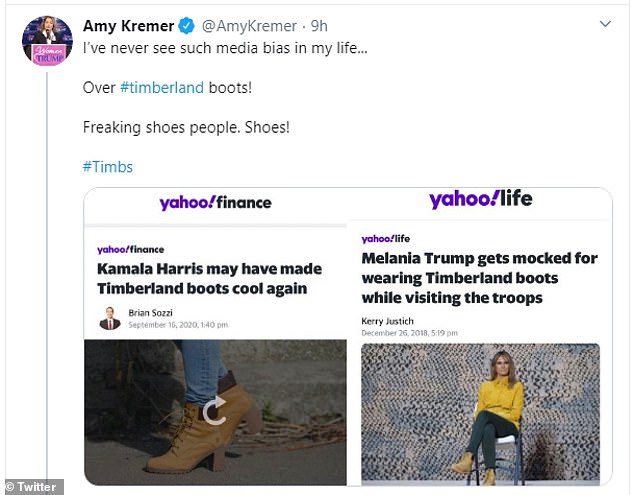 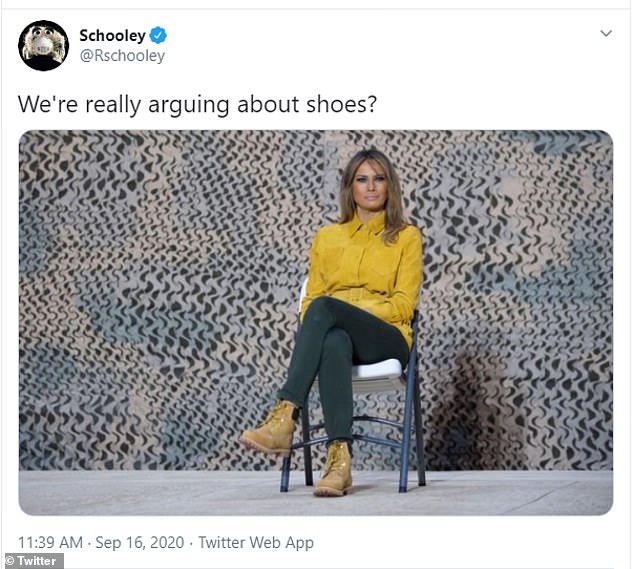 However, some noted that Harris has worn these shoes before. She was spotted wearing the same boots in August last year and during the primary this year.

Many praised Harris for her cool look and for sporting the workwear Timberland boots, which gained popularity in the 90s with the New York rap scene worn by the likes of Tupac, Aaliyah, Wu-Tang Clan and rapped about by the Notorious B.I.G.

Meena Harris, Kamaka’s niece shared a video of Harris dismounting the plane Tuesday in California with the caption: ‘THE TIMBS THO’. 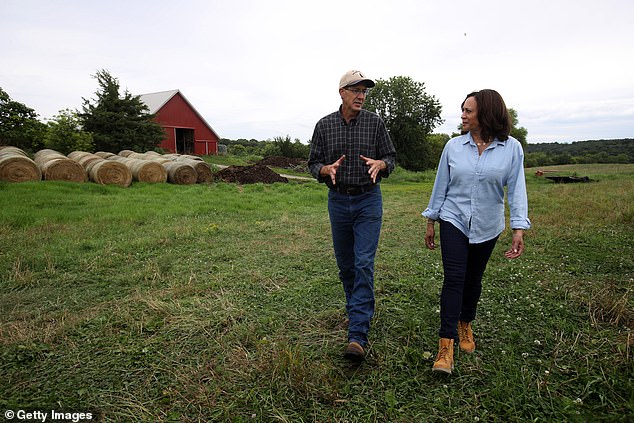 Harris sported the same Timberlands boots in August 2019 in Iowa 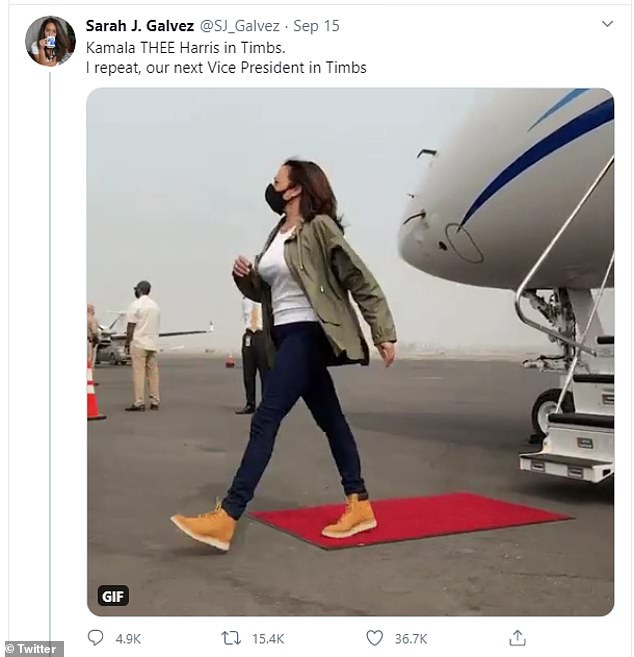 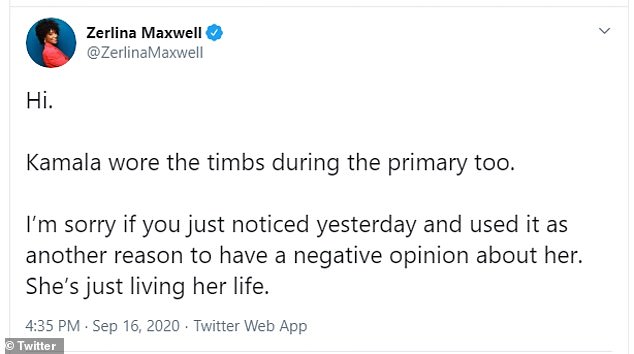 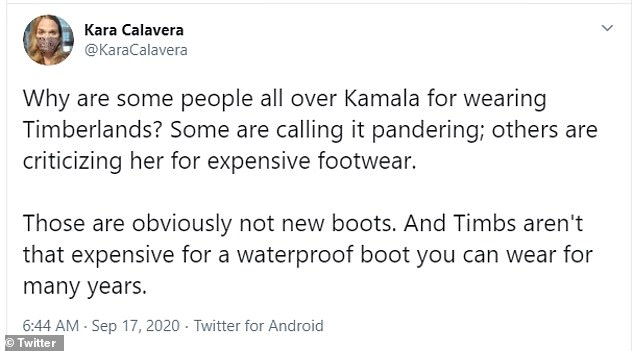 ‘The @KamalaHarris de-planing videos & her completely appropriate self-confidence every time are quickly becoming one of my favorite things about this campaign,’ one Twitter user added.

‘Kamala Harris in California being Vice Presidential with her Timberlands,’ another added.

Social media users speculated that Harris brought out the Timberlands in an satorial campaign to appear more casual and approachable with voters.