Lindsey Graham says he hopes to have Judge Amy Coney Barrett through the Supreme Court confirmation hearings one week before the presidential election on November 3.

The Republican Senator, who currently serves as Chairman of the Senate Judiciary Committee, made the announcement during an interview on FOX News’ Justice with Judge Jeanine Piro on Saturday night.

Barrett was formally nominated to the Supreme Court by President Trump on Saturday afternoon, with many Democrats hoping there will not be enough time to push through her confirmation before Americans head to the ballot box.

But Graham seems set on a speedy process, telling Piro he wants to start Barrett’s confirmation hearings on October 12.

’16 days from now we will start the hearings on October 12th. Monday will be introduction, opening statements, a statement by the nominee, Tuesday and Wednesday will be question days, and Thursday we will begin the markup process,’ he explained. 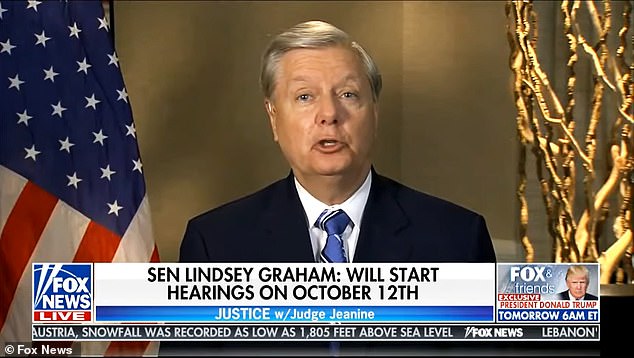 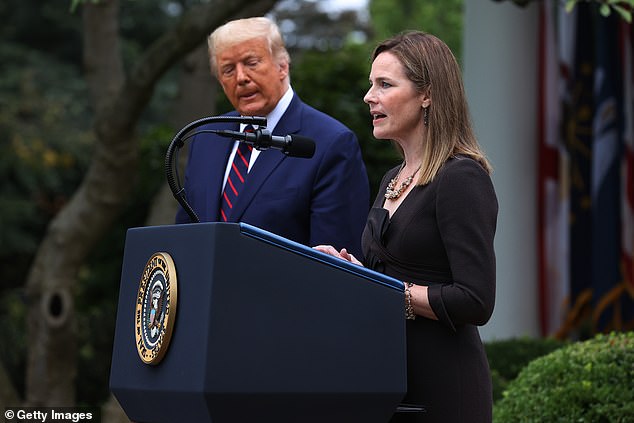 ‘I hope to get her out of the committee by October 26 [eight days before the election]… And then it’s up to Mitch McConnell.’

Some Democratic senators say they will refuse to meet with Barrett and are threatening to boycott the hearings, claiming Trump should not get to nominate a SCOTUS pick so close to Election Day.

But Graham says he is not bothered by the threats, telling Piro: ‘“It would make the hearings quicker!’

Graham’s appearance comes after President Trump says he expects the Senate to confirm Barrett before the election on November 3.

‘I think it’s going to go quick – I hope,’ Trump told reporters on the South Lawn of the White House on Saturday, shortly after officially announcing Barrett’s nomination to fill the high court seat vacated upon the death of liberal Justice Ruth Ginsburg.

Asked if he expects partisan fireworks during Barrett’s confirmation, Trump said it would be ‘very, very hard’ for Democrats to give her a tough time because of her qualifications. 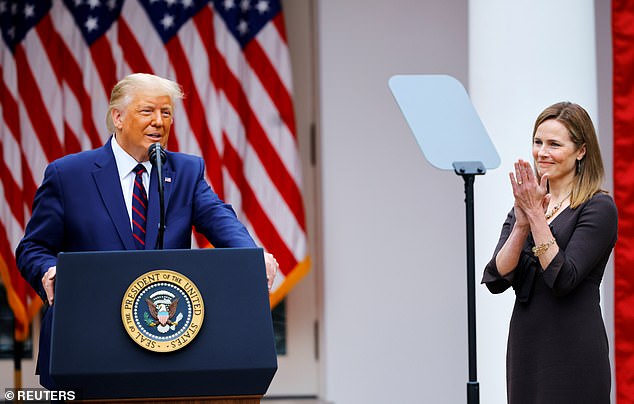 ‘This should be a straightforward and prompt confirmation. It should be very easy,’ Trump said with a laugh, earlier at the Rose Garden press conference.

‘Good luck. It will be very quick … We said that the last time, didn’t we?’ a reference to the 2018 fight over Justice Brett Kavanaugh’s confirmation.

‘I further urge all members of the other side of the aisle to provide Judge Barrett with the respectful and dignified hearing that she deserves, and frankly, that our county deserves,’ Trump said.

Trump said he anticipates that confirmation hearings will open on October 12.

Trump told reporters at the White House on Saturday that the date for the first hearing is ultimately up to Senate Judiciary Committee Chairman Lindsey Graham.

The hearings are part of an accelerated timeline as the Republican-controlled Senate seeks to vote on Trump’s nominee before the election, and cement a 6-3 conservative majority on the court.

Graham, a Republican and Trump ally, has said he hopes to have a normal hearing process despite an expedited timeline and Democratic protests that Trump should not be filling the vacancy before the country chooses its president. 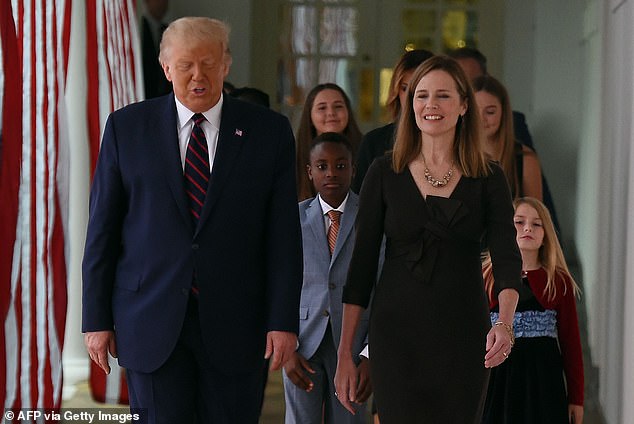 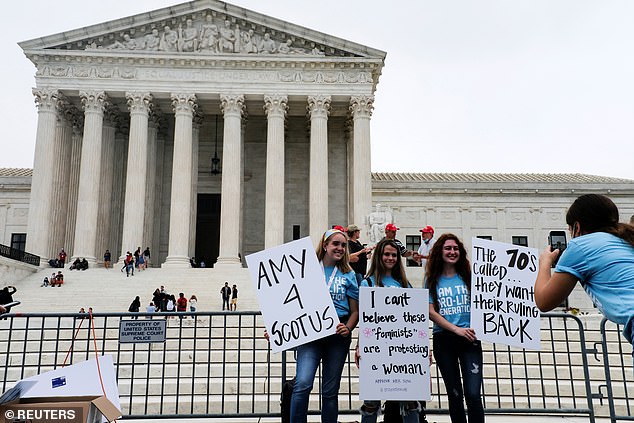 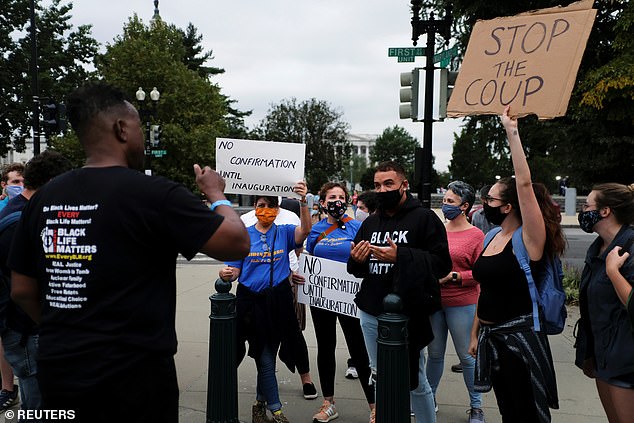 Constitutionally, there is no time limit or waiting period imposed on the Senate in considering a president’s Supreme Court nomination.

In 1941, the Senate confirmed Justice James Byrnes on the same day that President Franklin Roosevelt nominated him.

Kavanaugh’s confirmation ran longer than average, on the other hand, taking 89 days.

‘This reprehensible power grab is a cynical attack on the legitimacy of the Court,’ he added.

Barrett had been a leading contender for the nomination, having been considered for the seat now occupied by Justice Kavanaugh.

The 7th U.S. Circuit Court of Appeals judge had met with Trump this week. 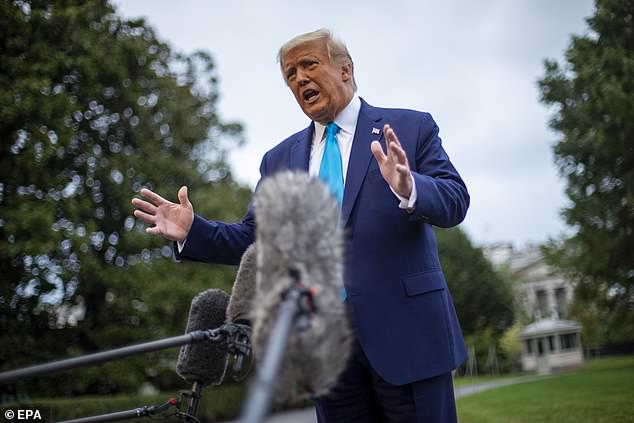 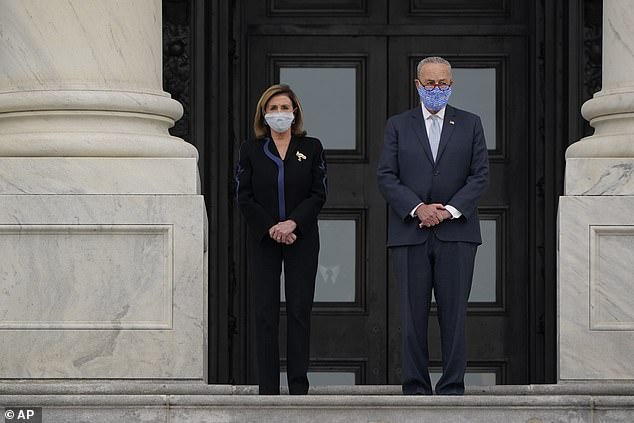 Barrett called the Rose Garden ceremony a ‘rather overwhelming occasion’ and a ‘momentous decision’ for a president.

‘I am truly humbled by the prospect of serving on the Supreme Court,’ she added.

Barrett, at one point, spoke directly to the American people: ‘The president has nominated me to serve on the United States Supreme Court and that institution belongs to all of us.’

‘I would assume this role to serve you,’ she pledged.