The hilarious moment a magpie swooped a junior football player so relentlessly he had to leave the field was captured on camera by an amused spectator.

The bird singled out Parkes Spacemen player Jack Skinner during a junior rugby league match against the Forbes Magpies in Dubbo, on Saturday.

Jack had to bob and weave in an attempt to escape the bird, which was unfazed by the other 25 players on the field.

The relentless onslaught eventually forced the coach to pull Jack from the field, much to the amusement of some spectators. ‘They’re taking him off!’ one spectator said.

The magpie still wasn’t satisfied and pursued the young player from the field as a team trainer tried to protect him.

Once Jack made it to the sideline the bird disappeared from view and seemed to finally leave him alone.

Video of the incident has already been viewed more than 300,000 times on social media.

‘Only time you’d ever see me run,’ another added.

‘What nightmares are made of,’ a third user joked. Despite there being only one video the magpie reportedly swooped a number of other players during the game.

Magpies usually breed between August and October, which is when they become protective of their nests.

Swooping from one bird will generally last six weeks, or until their chicks are fledged and ready to leave the nest.

Research has also shown magpies can recognise up to at least 100 different people and tend to only swoop things they see as a threat. 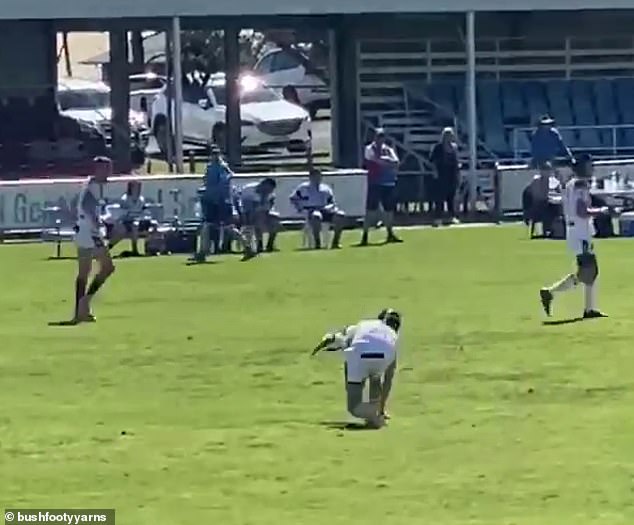