Melburnians have basked in the city’s sunny weekend weather as Premier Daniel Andrews announced he will finally lift the city’s 9pm curfew on Monday.

From 5am on Monday, Melbourne’s nearly five million residents can go out at night again as daily case totals in Victoria continue to fall, although fines for breaking COVID-19 gathering limits will rise to $5,000 from $1,600.

Masked joggers and sporting enthusiasts eager to kick the footy took to Carlton’s Princes Park to enjoy their two hours of permitted exercise – a rule that will remain in place despite Melbourne’s accelerated restriction easing.

Melbourne residents have hit out at Mr Andrews’ new rule specifying they can exercise together 5km from their homes, but not visit each other’s houses.

Outdoor pools will reopen and fishing and hiking are permitted – still within 5km of the home – but sports like golf and tennis will still be banned.

The draconian rules will remain in place despite Victoria – Australia’s worst-hit state in terms of coronavirus transmission – recording 16 new cases and two deaths on Sunday. 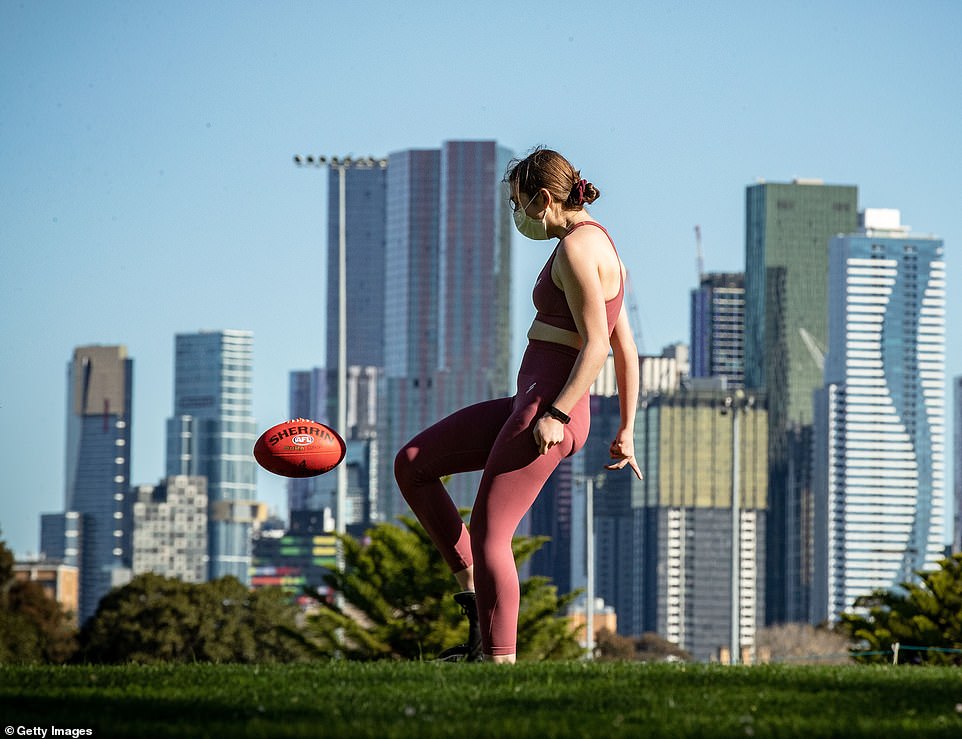 A woman wearing active wear and a face masks kicks the footy in Melbourne’s Princes Park in Carlton on Sunday. Melbourne’s nearly five million residents can go out without fear of breaking curfew from 5am on Monday 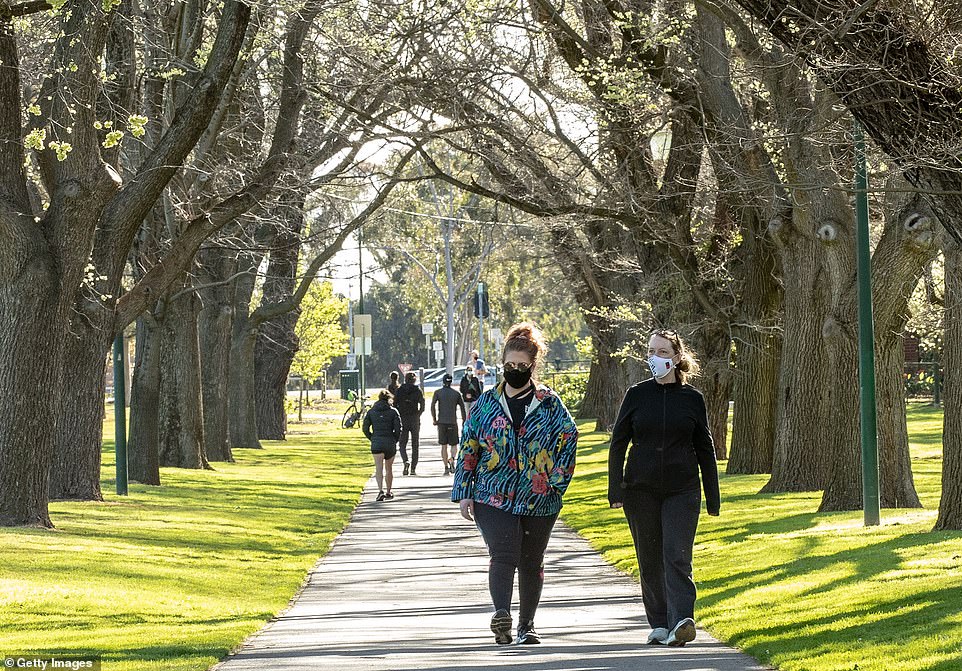 Walkers enjoy exercise in the afternoon sun at Princes Park in Carlton on Sunday. Victoria has recorded 16 new coronavirus cases and two deaths in the past 24 hours. 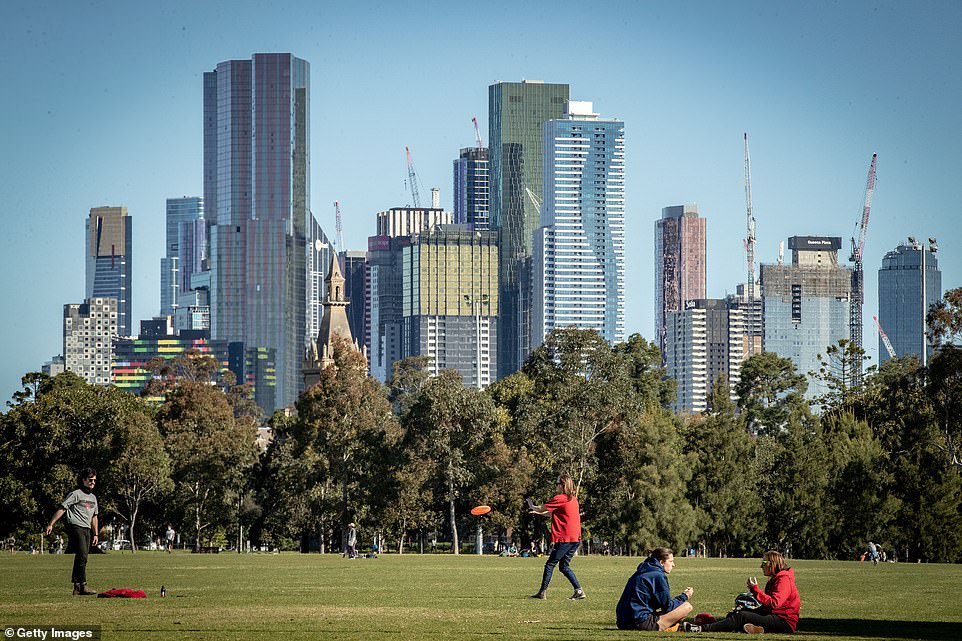 Residents enjoy themselves in the afternoon sun on Sunday with the Melbourne CBD looming in the background. Melbourne residents can exercise together 5km from their homes from Monday 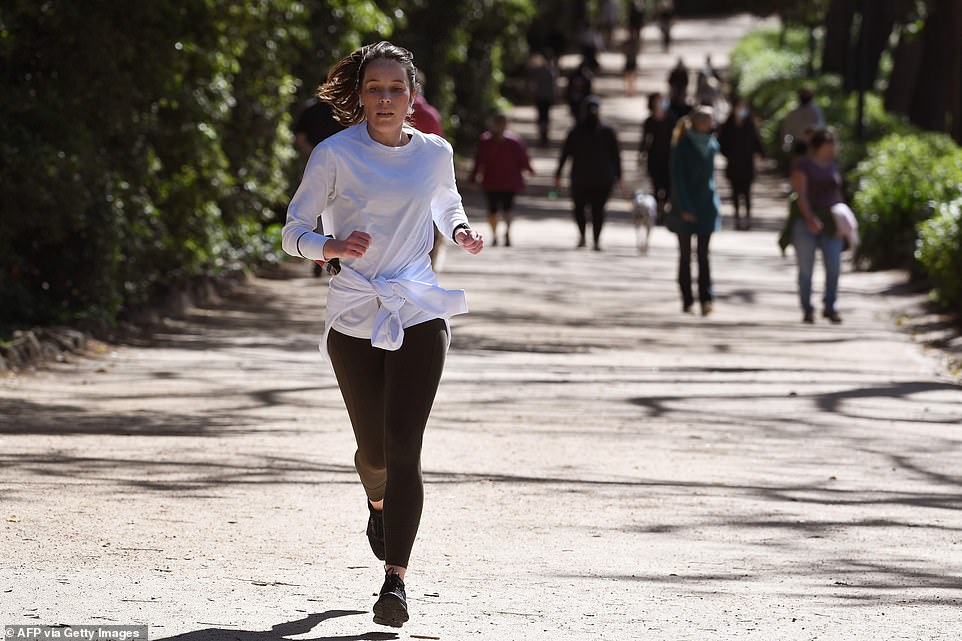 A woman jogs around The Tan running track in Melbourne on Sunday. An overnight curfew in Australia’s second-biggest city will be lifted from September 28, almost two months after it was imposed to counter a surging COVID-19 coronavirus outbreak

Melbourne residents were critical of the new rule specifying they can exercise together 5km from their homes, but not visit each other’s houses

‘Let ALL kids back to school and extend the 5km rule even just slightly to 10km. Victorians are doing the right thing and should be allowed more freedoms,’ one person wrote.

‘Daniel Andrews says we can now go fishing but only in a 5km radius of your home. So I will drop a line in my local drain or sewer creek – thanks!?’ another added.

Schools and universities will see limited re-openings under the new restrictions – with primary school students going back to school on October 12, as well as apprentices and final year university students for needed in-person training and assessments.

Residents taking to the warm Melbourne Spring sunshine on Sunday were pictured wearing masks as Mr Andrews warned face shields could no longer be used instead of a mask.

‘You can wear one if you want, in terms of your eyes, but it would need to be accompanied by a mask… anything is better than nothing, but a shield is akin to not wearing a face covering,’ Mr Andrews said. 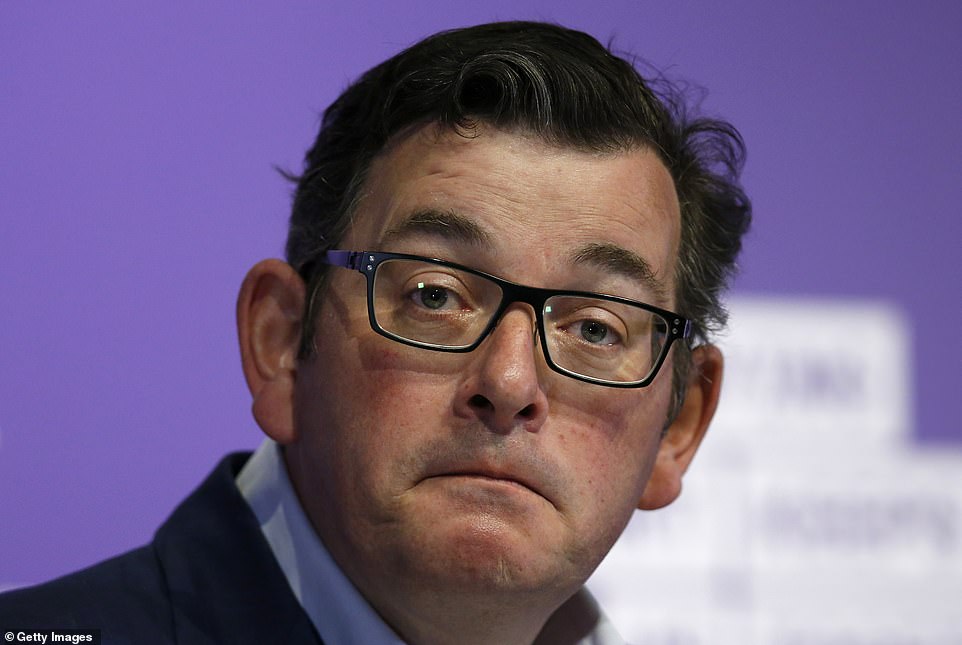 What changes in Melbourne on Monday?

Curfew is gone from 5am on Monday

Five people can exercise together 5km from home, but not visit each other

Primary schools reopen on October 12, as do universities for final year students

Workers can exercise near workplaces, not just their homes

Meat processing plants back to 80 per cent capacity, factories to 90 per cent

The altered rules came as Mr Andrews announced major changes to the roadmap out of lockdown at his daily press conference on Sunday.

How fast the state reopens will be determined by how many cases there are, instead of dates set ahead of time – as progress is faster than expected.

‘It means that getting back to the things we love – seeing more of the people we love – not only is achievable, it’s in our hands,’ Mr Andrews said.

Up to five people from two households can gather for group exercise, but are still forbidden from visiting each other’s homes.

‘But I also understand, what I am completely clear about, the evidence is irrefutable.

‘The home environment is one of the most risky environments. It is how people let their guard down, and there is a degree of informality.

However, people can visit sick or elderly family and friends in hospital or nursing homes one at a time for two hours a day.

Personal training can resume with a maximum of two people and their trainer.

Weddings can have up to five people and religious worship can happen outside with five people plus a person leading the service.

Childcare centres and early child education will reopen, allowing essential workers to get back to work and those working from home some peace and quiet.

Jim’s Mowing boss Jim Penman may call off his frequent attacks on Mr Andrews as gardening and landscaping for sole traders can resume.

Pet grooming will also restart, a welcome relief for anyone whose furry friend’s coat is in desperate need of maintenance.

Essential workers can also exercise near work instead of home, but must carry their working permit on them.

Elective surgery will slowly ramp up to 75 per cent of normal capacity after being shut down for non-urgent cases when lockdown began. 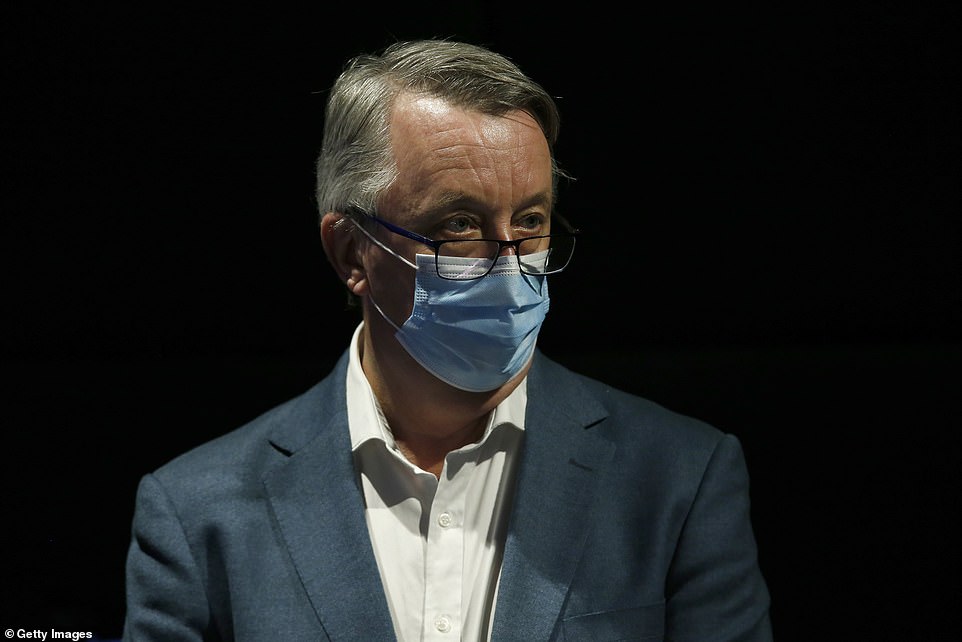 Rules on face masks are also more restrictive with scarves, bandannas and similar banned and face shields must also be worn in conjunction with a mask. Newly appointed Victorian Health Minister Martin Foley demonstrates the type of mask required 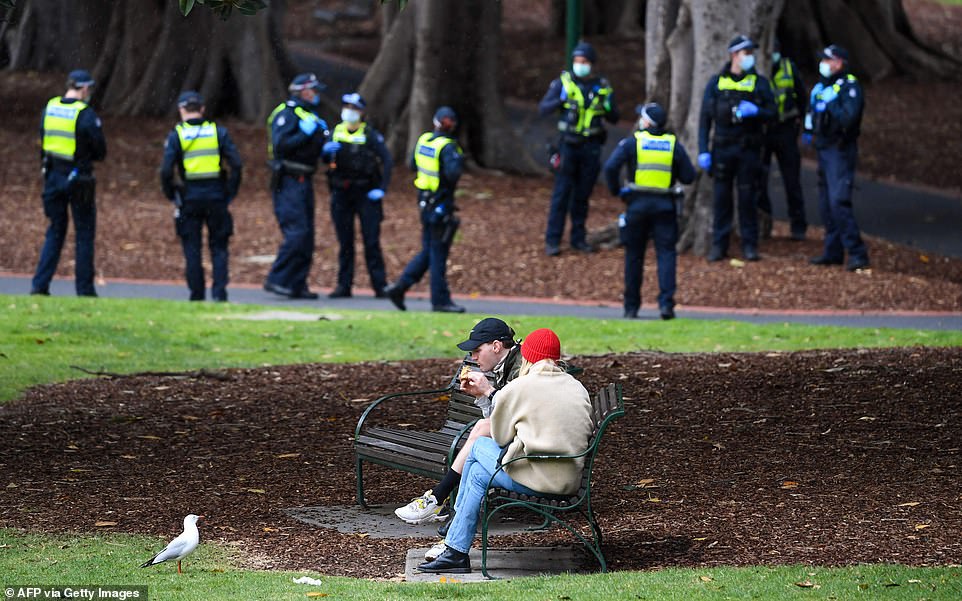 Abattoirs, seafood and meat processing plants which had their production slashed to a third can now ramp back up again to 80 per cent.

‘With spring lamb, carving and other seasonal factors, not to mention that Christmas is coming… we are pleased to be able to lift those percentages of workers,’ Mr Andrews said.

Factories can also go back to 90 per cent of their pre-lockdown capacity. These are all subject to complying with coronavirus safe plans.

Overall, about 127,000 staff across Melbourne will be able to go back to work on Monday. 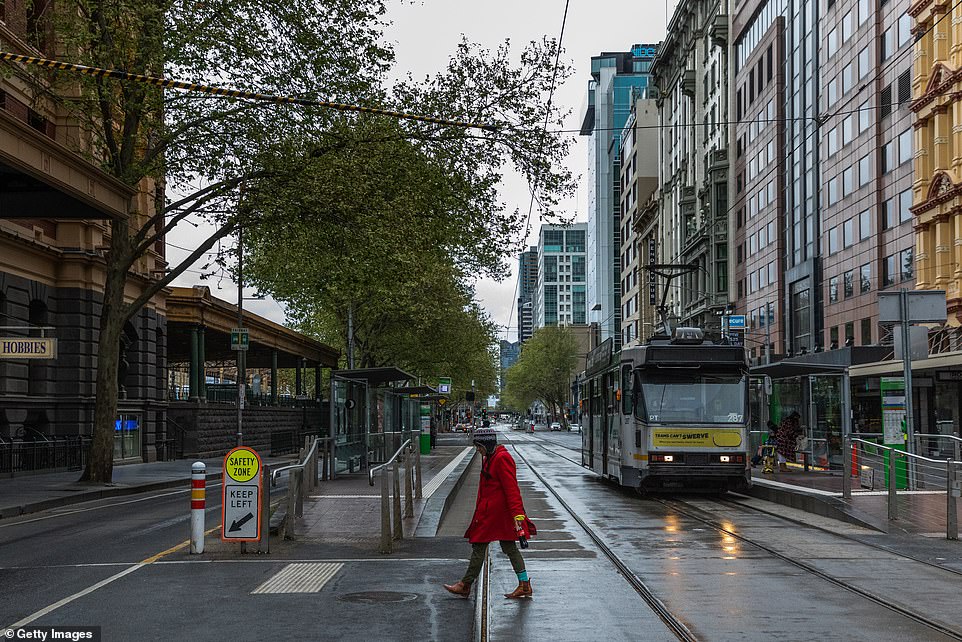 He said it was no longer a ‘proportionate measure to have in place’.

‘We always said that aged care cases would be a stubborn tale of this epidemic curve,’ he said.

‘That remains the case but it does mean that not an insignificant proportion of our daily cases are in aged care and the curfew doesn’t address that transmission risk, obviously.

‘Over the course of the last couple of weeks, we have talked about 21 mystery cases but really we are getting to one to three community cases per day.’

Under the original plans to take effect from Monday, the 9pm curfew would remain, as well as the 5km travel limit and takeaway-only for restaurants and cafes.

The Victorian opposition had calling for rules to be loosened well beyond this, saying the curfew should go, all school students should return and restaurants, retail and offices should re-open.

October 19 is the next date that restrictions are likely to be further relaxed if case numbers continue to fall – a week earlier than planned.

This would finally end the lockdown and allow Melburnians to leave their homes for any reason, and outdoor dining and gatherings allowed for 10 people.

Families would therefore be able to have gatherings, but it wouldn’t be much help for those lonely at home without their friends. 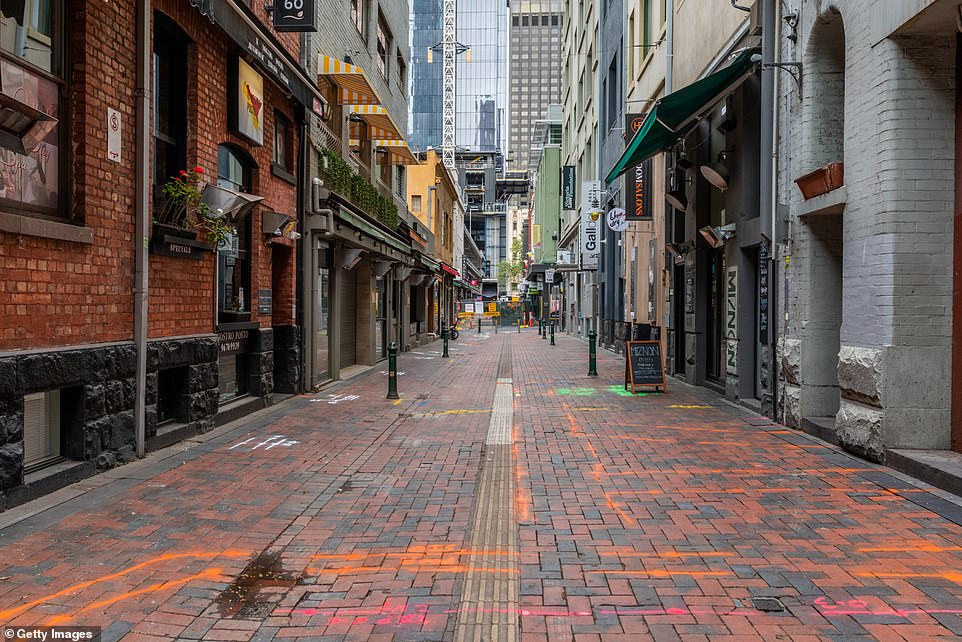 A usually busy laneway with popular restaurants is seen empty, and will remain so with eateries closed for at least another three weeks

Mr Andrews’ roadmap won’t allow friends to visit each other, pubs and restaurants to open inside, and retail, gyms, and places of worship to reopen until there are 14 days of zero cases in a row.

Under this widely-condemned benchmark, NSW would still be heavily restricted but it has instead utilised contact tracing to keep cases to a trickle.

Victoria also suffered another two deaths in the 24 hours to Sunday morning, taking its total to 784.

The number of new cases and deaths is up from Saturday’s total of 14 cases and one death.

The two-week rolling daily case average of 23.6 is well under the 30-50 case average health authorities were aiming for.

For the first time in months, there are no active cases in regional Victoria, which had its lockdown lifted a few weeks ago.

It has been a dramatic few days in Victorian politics culminating in the resignation of Jenny Mikakos as health minister on Saturday morning.

By the afternoon, Daniel Andrews had announced mental health minister Martin Foley as her replacement and he was sworn in.

Ms Mikakos’ resignation came a day after she heard her boss tell the hotel quarantine inquiry board she was responsible for the Department of Health and Human Services, which was ultimately responsible for running the quarantine scheme.

The hotel quarantine program in Victoria failed because private security guards breached infection control, causing the spread of the virus into the community and a devastating second wave.

To date, 784 Victorians have died of the virus and the entire state has been subject to strict lockdowns, workforce and school closures and prolonged social isolation.

‘I have never wanted to leave a job unfinished but in light of the premier’s statement… and the fact there are elements in it that I strongly disagree with… I cannot continue to serve in his cabinet,’ Ms Mikakos wrote.

‘I am disappointed that my integrity has sought to be undermined. I am deeply sorry for the situation that Victorians find themselves in.

‘In good conscience, I do not believe that my action led to them.’

Ms Mikakos will also be resigning from the Victorian parliament.

Mr Andrews on Sunday said he had not spoken with his former health minister since she sent him her resignation text message.

‘I’m sorry for her and I am saddened by this, I wish her well. She’s made a decision and it was the only decision she could make once she determined she could no longer sit in the cabinet,’ he said.

The premier, like all leaders who came before the $3 million inquiry, told the board on Friday he did not know who made the decision to use private security guards.

He pushed back on suggestions from reporters on Saturday that he should also resign, saying he would not run from a challenge and remained focused on fighting the pandemic and repairing the state’s economy.