The Seattle police watchdog decided Friday that an officer who pepper-sprayed a  seven-year-old child during an anti-racism protest did not violate the department’s policy.

The Office of Police Accountability received 13,000 complaints after a video of the boy screaming ‘I can’t see’ while being doused in milk by other protesters went viral following a May 30 demonstration.

OPA Director Andrew Myerberg deemed that the officer had not intended to hit the child and did not realize the boy was in his line of fire when he started to pepper-spray a woman standing immediately in front on him.

Myerberg described body-cam and social media footage of the incident as ‘heartbreaking’ but claimed that it did not mean the the officer was guilty of excessive use of force. 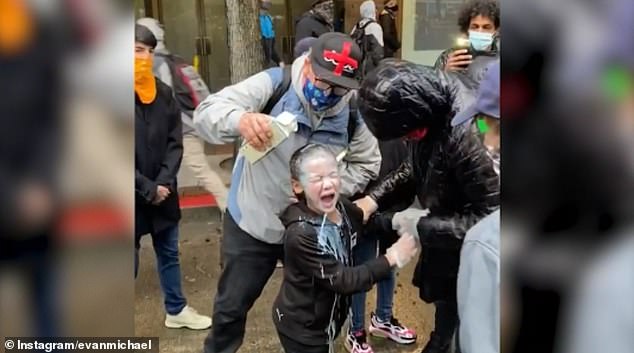 The Seattle police watchdog decided Friday that an officer who pepper-sprayed a seven-year-old child during an anti-racism protest did not violate the department’s policy. The video went viral on May 30 showing the young boy screaming that he couldn’t see

‘Contrary to the popular narrative surrounding this case, the Child was not individually targeted with pepper spray by an SPD officer,’ he wrote.

He added that the officer was also full of regret over the incident.

‘The picture of the Child standing in the middle of the street, crying, with milk running down his face is an unforgettable image from these demonstrations,’ Myerberg wrote.

‘That the Child suffered this trauma is something that OPA is extremely sorry for and that no decision in an administrative investigation can ever remedy.’

The highly publicized incident took place outside Westlake Plaza in Seattle during one of the first Black Lives Matter protests in the city following the killing of George Floyd during arrest in Minneapolis on May 25.

The seven-year-old had been at a protest with his father which was largely peaceful.

However, a woman shown in video masked in a white t-shirt and bike helmet grabbed the baton of an officer and began shoving.

The cop, a sergeant who has not been identified, was among those who rushed to aid riot-armor-clad officers stretched across Third Avenue after police pulled a man behind the police lines to arrest him for an earlier incident, the investigation said. 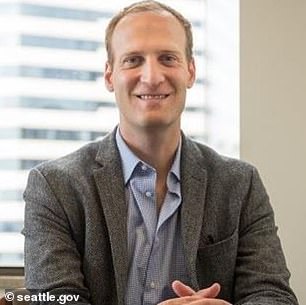 When some of the protesters began jostling, he unleashed a cannister of pepper spray at the woman with a blast ball in the other hand. The spray hit the child when the woman ducked out of the way and he received a hit of powerful irritant in his eyes.

From the moment of the arrest of the protester to the officer deploying the pepper-spray only took 25 seconds.

After the boy was hit, his father takes him aside and can be seen shouting at officers.

Myerberg said that he understood the upset about the video but that he was willing to shoulder the flak for his decision.

After his review of social media video and a number of body-cam videos, he deemed the officer wouldn’t have been able to see the child among the crowd of adults, meaning the boy was not the intended target.

‘I understand that this decision will be unpalatable to a lot of people. I accept that,’ Myerberg told the Seattle Times. ‘In some respects, it is unpalatable to me as well.’

‘I really struggled with this one,’ he added. ‘Because there is a victim here: the child. It’s heartbreaking to watch it.’

The boy’s family have said they are unhappy with the decision. 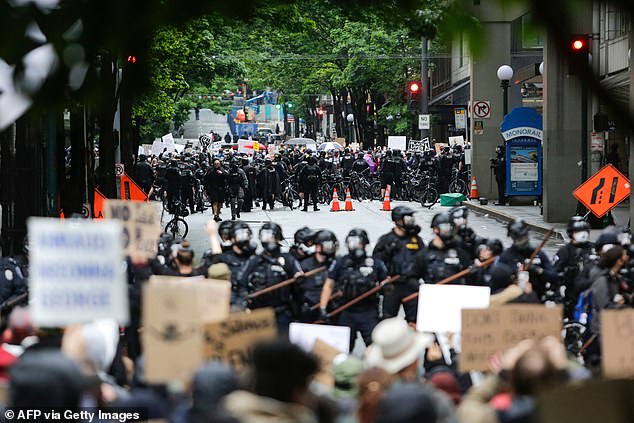 The incident happened on May 30, the first day of protests in Seattle, pictured 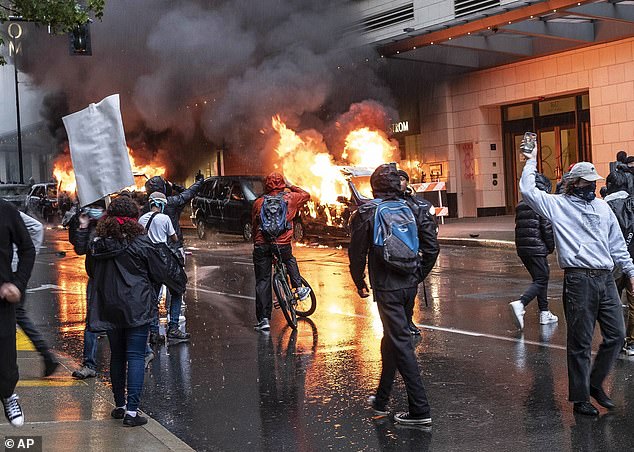 While the May 30 protests were mostly peaceful, some vehicles were set on fire, pictured

David Owen, a Seattle civil-rights attorney representing the child and his father, Mando Avery, told the Seattle Times that they were ‘deeply disappointed, but not surprised, by the result reached by the OPA’.

‘Today, they have confirmed that it is the Seattle Police Department’s position that the use of pepper spray in an intentional and reckless manner that it would strike an innocent child exercising their First Amendment rights is ‘within policy’,’ he said.

‘We understand the OPA has said it is “sorry” for these actions. But “sorry” and “regret” is not sufficient. We demand change.’

Owen added that no cop tried to help the child after he was sprayed and claimed the refusal to identify the officer responsible ‘undermined the claims of objectivity and transparency that the City purports to value’.

Other protesters who filed complaints have also greeted the result with skepticism and called the OPA process ‘hostile and retraumatizing’. 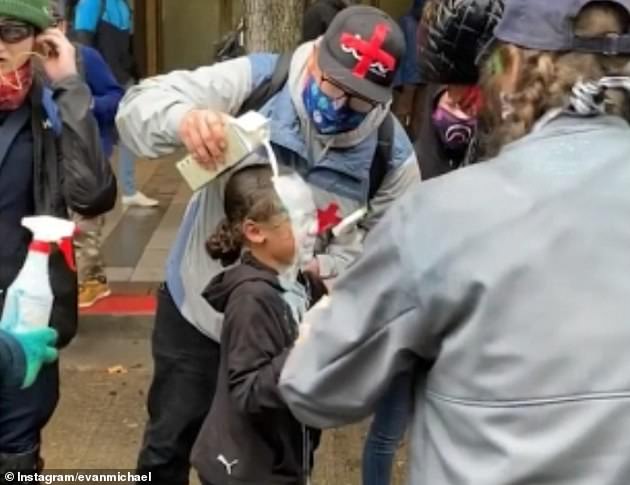 A fellow protester poured a carton of milk over the young boy’s face after he was allegedly pepper-sprayed during a protest in Seattle, Washington, on May 30 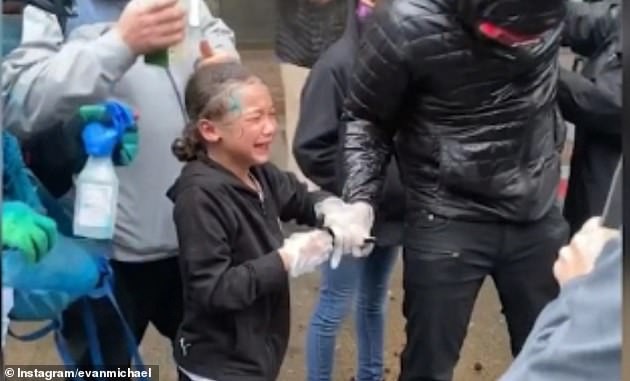 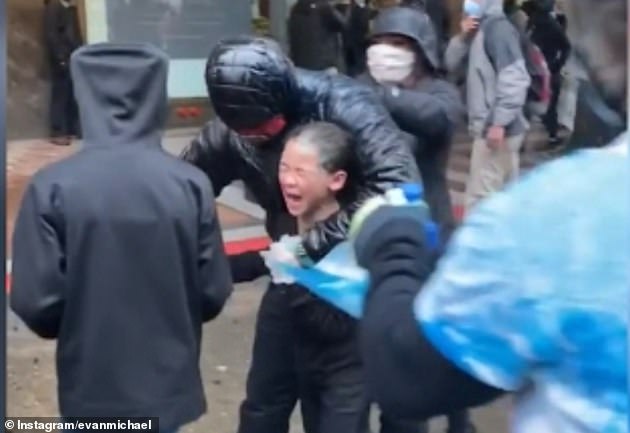 The child’s father tried to restrain him as he screams out ‘I can’t see’. The family has said they are unhappy with the conclusion of the investigation into police misconduct 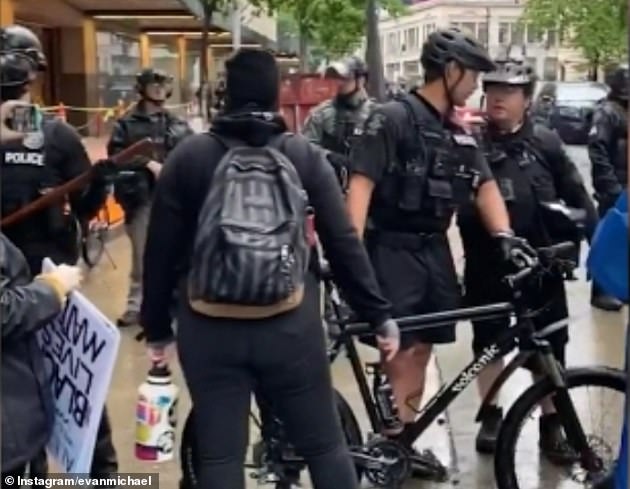 Protesters confront police officers, who are blocking the street, after they allegedly pepper-sprayed the youngster. The OPA decided the young boy was not the officer’s target

Protester Aisling Cooney told the Times that the lack of accountability in the pepper-spraying incident ‘could erode faith in an accountability process of which protesters are already skeptical.

‘The fact that they can’t sustain a complaint when a child gets sprayed—what’s going to happen for the rest of us?’ Cooney said.

She was also pepper-sprayed at close range at a protest in June which caused her to have a severe allergic reaction and be taken to the emergency room.

She also says officers dragged her and hit her with a baton at a later protest on July 25.

In his investigation, Myberberg wrote that that OPA is ‘required to make decisions based on applicable policy and training … not just reach a finding that may be the most politically expedient or that which we think will be most acceptable to demonstrators, officers, or some other group.’

‘In our current environment, where nuance is rare, facts do not always seem to matter, and people often make up their minds before having complete information, this is a difficult place to be. But this is where OPA will always find itself — trying to make sense out of split-second decisions in incredibly complex and human situations,’ he wrote. 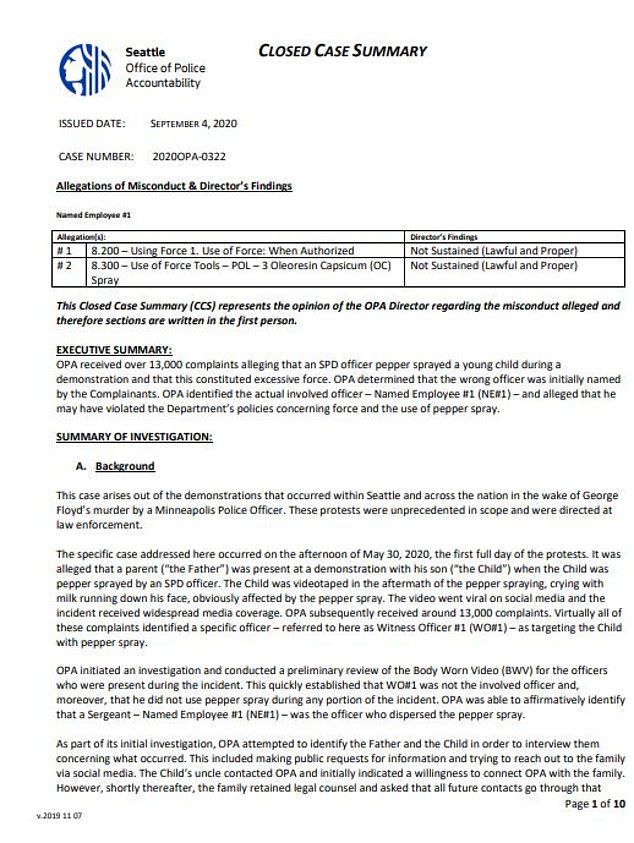 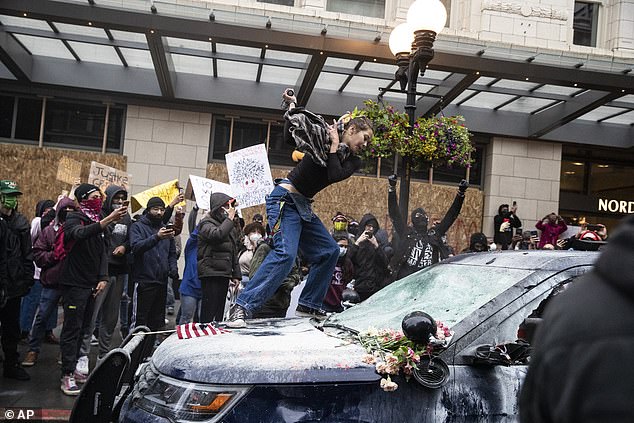 May 30 was the first day of protests in Seattle, pictured. There have been 19,000 complaints of police misconduct against protesters since then, 13,000 of them regarding the boy

The pepper-spraying of the child was among the first five investigations completed and released by the Police Department’s civilian-run OPA on Friday.

The office has received 19,000 complaints about police conduct since the Seattle protest began on May 30, the majority about the child being pepper-sprayed.

Mark Grba, the OPA’s civilian deputy director of investigations, said he received calls from all around the world as the clip of the screaming child spread.

An investigation into another high-profile incident during the early days of the Seattle protests found that an officer violated the policy of the police department after they placed a knee on a man’s neck.

Video of this incident was particularly concerning so soon after Floyd’s death in which white officer Derek Chauvin placed a knee on the black man’s neck for close to nine minutes.

The officer has been cited with professional misconduct. The case has now been sent to the Interim Police Chief Adrian Diaz for consideration.

It happened just hours after the pepper-spraying incident, outside of a downtown T-Mobile store that was being looted.

Video shows officers on bikes arriving and beginning to arrest those looting.

Two officers are seen holding a man on his stomach as they handcuff him. One of the officers places his knee on the man’s neck but protesters react immediately.

‘Get your knee off his neck!’ one shouts. 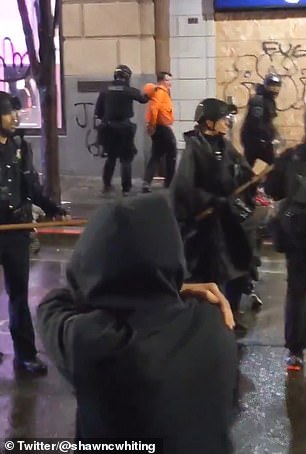 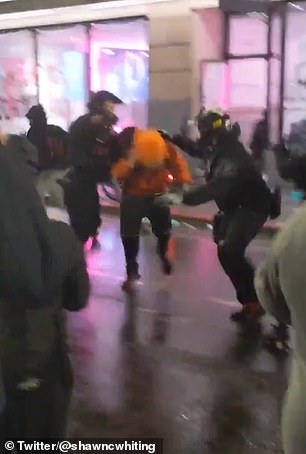 Stunning video captured the moment a Seattle cop removed a fellow officer’s knee from the neck of an alleged looter as they arrested him amid George Floyd riots. The looter (above in orange) repeatedly tried to escape from the grips of two officers 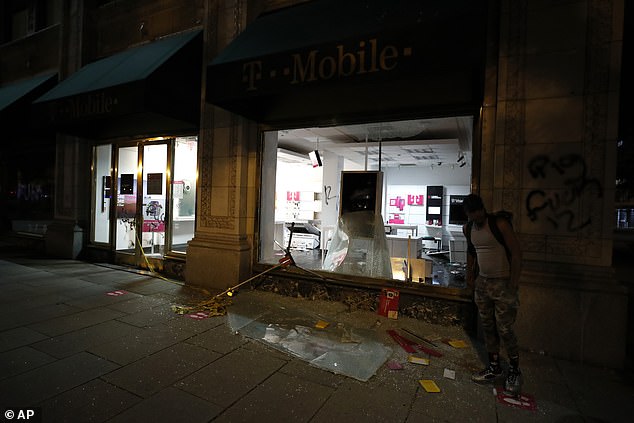 The officer’s knee remained on the man’s neck for 13 seconds before another officer removed it and the detainee was arrested, according to Q13Fox.

Further investigation found that the same officer was captured on body-cam footage cursing at a protester, telling a person he was arresting to ‘shut the (expletive) up’, and asking another officer if they should rough up a certain protester, according to the Associated Press.

There are currently 118 ongoing OPA investigations into allegations of misconduct by the city’s police department during the Black Lives Matter protests.

Some of them involve ‘large, and complex’ investigations into the use of less-lethal weapons during the CHOP occupation in early June.

Myerberg told the Times that the conclusion of the first of those investigations will be released in the coming weeks.

Brba added that some of the people who reported the complaint are not cooperating with the investigation, while in other cases, there is too little information available.

Others involve the review of hundreds of hours of body-camera video and other data.

‘It’s a monumental effort,’ he said.

The other three results released Friday saw an officer agree to being disciplined after he was recorded telling protesters ‘I have a hard-on for this (expletive) and, if they cross the line, I will hit them,’ quoting the movie Top Gun.

‘Prior to this complaint being filed, (the officer) self-disclosed to his supervisor and explained that he was quoting a movie,’ the misconduct report states. ‘(The officer) also conveyed that he recognized that his statements could have been perceived as unprofessional by demonstrators.’

Another investigation found inconclusive evidence to suggest an officer had pushed an elderly man to the ground on May 30. No video evidence of the alleged incident could be found.

The fifth case found that officers acted lawfully after a couple complained they were ‘treated aggressively because of his sexual orientation’.

Seattle was a major center of unrest over the summer months following the deaths of George Floyd and Breonna Taylor.

It was reclaimed in early July and protesters were cleared following several violent incidents and the death of a 16-year-old boy.