Tributes are flowing for a terminally-ill young woman who lost her brave cancer battle just days after marrying the love of her life.

Ashleigh Simrajh, 23, was diagnosed with having melanoma in 2019, more than a year after she was told the lump on her leg has was probably a wart.

After recently being told she had just days to live, she and partner Jason Hale said ‘I do’ in front of 50 of their closest family and friends in an emotional ceremony at Sea World Resort on the Gold Coast on September 5.

Her devastated husband confirmed his bride’s death in a heartbreaking tribute on Tuesday morning, describing her as having the soul of an angel and ‘the most beautiful woman I could’ve ever imagined being with’. 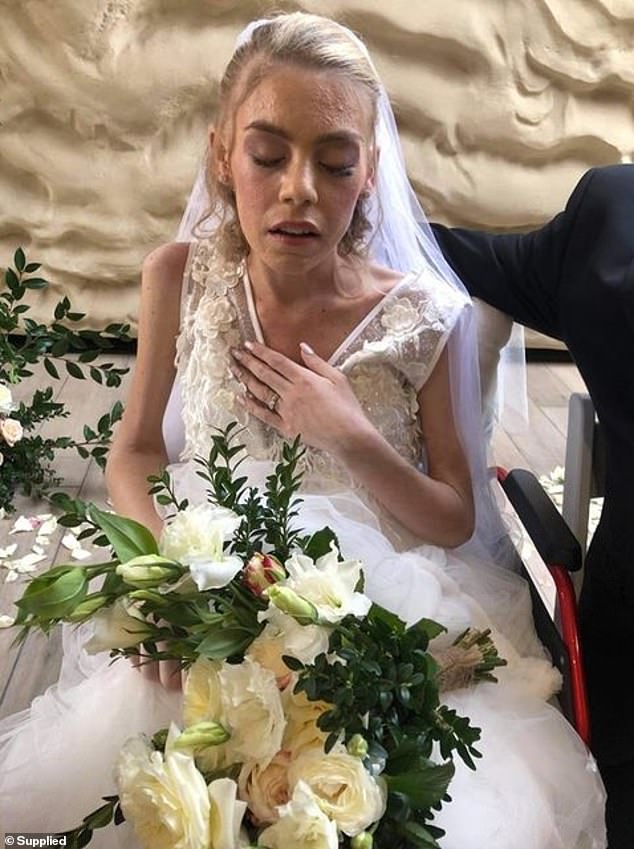 ‘You were so brave and strong and I know that you tried your absolute best fighting this battle, you couldn’t have tried any harder than you did. I’m so proud of you babe.’

He thanked his wife for everything she did for him and for being so kind, selfless and caring.

Thank you for loving me so much and making me feel like I was on top of world, its what any man hopes for and dreams of,’ Mr Hale continued.

We had so much planned out! We pictured having kids travelling the world and most importantly growing old together!

We would’ve done so much more than that too, as any loving couple does. 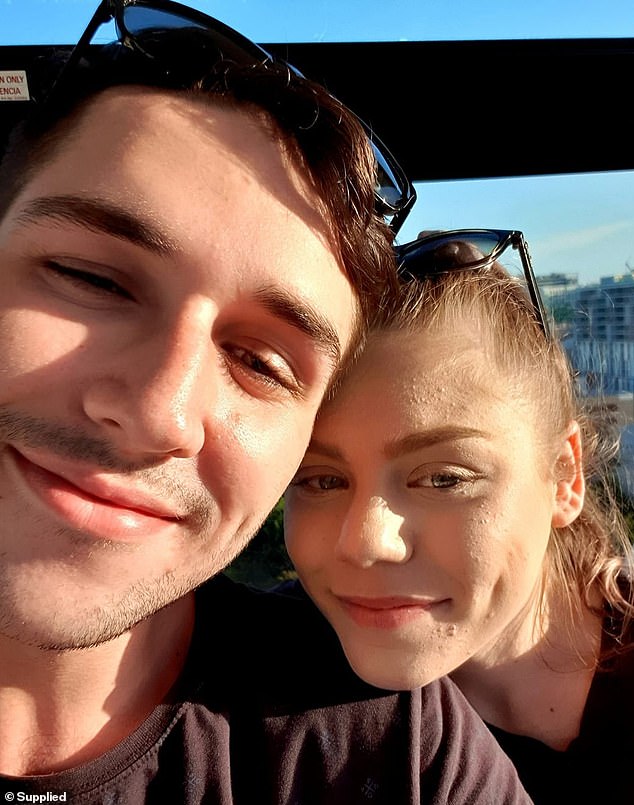 ‘I think growing old with you was something I wanted to do the most. Not much else mattered to me than to just be there with you for my whole life.

‘Knowing that these things won’t ever happen rips me apart inside. I’ll never stop thinking about them.’

‘I really don’t know what I’m going to do without you now. I’m so lost and feel completely empty inside. It doesn’t even feel real to me that you’re gone, it just feels like I’m in this horrible dream which I can’t escape.’

‘I needed you in my life. You were my best friend’

‘I don’t know whereabouts you are now, but I hope I can find you again very soon

Her father Tony said the wedding was both the saddest and happiest day of his life, after the family’s world was flipped upside down by Ashleigh’s illness.

The Gold Coast community banded together to raise $18,000 for the ceremony.

‘We got told in late August that she had one to three days to live and her strength to still be here 12 days later to get married just showed how important it was for her,’ Mr Simrajh told Daily Mail Australia last week.

Ashleigh, a ‘fanatical’ Essendon fan, had been using every ounce of her energy throughout her cancer battle to encourage others to go for regular skin checks and question a doctor’s diagnosis if something doesn’t feel right.

Ashleigh was 20 years old when spotted a lump on her leg and took herself to the doctor to get it checked.

But the family claims the doctor thought it was nothing more than a wart and sent her to a surgeon, without taking a biopsy.

‘She first saw a GP in 2018 who told her it was a wart and referred her to a specialist,’ Mr Simrajh said. 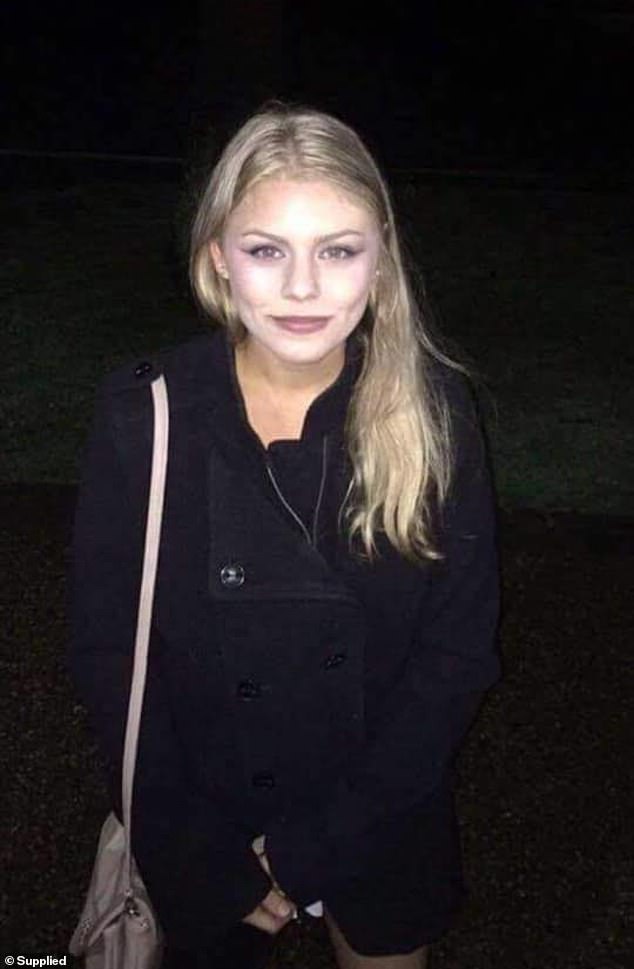 Ashleigh was 20 years old when spotted a lump on her leg and took herself to the doctor to get it checked. But the family claims the doctor thought it was nothing more than a wart and sent her to a surgeon, without taking a biopsy

‘Ash thought it was a skin specialist but we now know he was a general surgeon who again told her it was cosmetic and would cost $2,500 to get removed.

‘Neither of them did a biopsy on it and Ashleigh left reassured that it wasn’t anything to worry about.’

But overtime, Ashleigh’s bump became painful when she knocked it and she knew something wasn’t right. 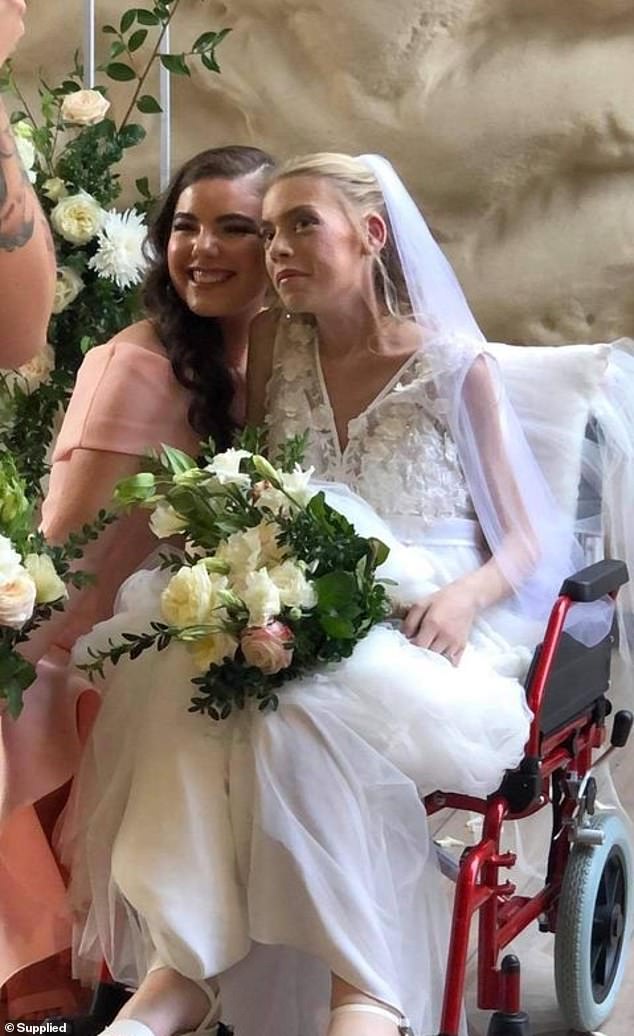 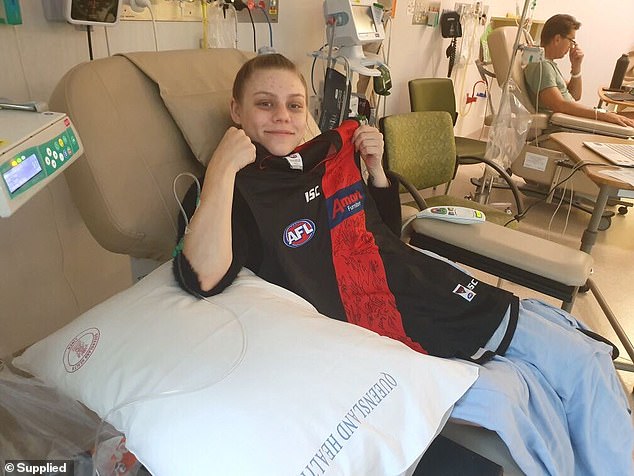 Ashleigh, a ‘fanatical’ Essendon fan, had been using every ounce of her energy throughout her cancer battle to encourage others to go for regular skin checks and question a doctor’s diagnosis if something doesn’t feel right

‘When it started to bleed she went to another doctor who immediately did a biopsy and told her two days later it was melanoma,’ Mr Simrajh said.

‘She now has lung cancer, liver cancer, cancer in her chest and only days to live.’

‘She believed them and continued her life as if nothing was wrong.

‘If it had been diagnosed when she first went to see them she wouldn’t be where she is now.

Mr Simrajh said the family’s life was  put on hold for 12 months and they all lived in dread about what was going to happen to Ashleigh.

‘Ash weighs 34 kilograms now and is skin and bones. She is under palliative care and struggles for every single breath,’ he said. 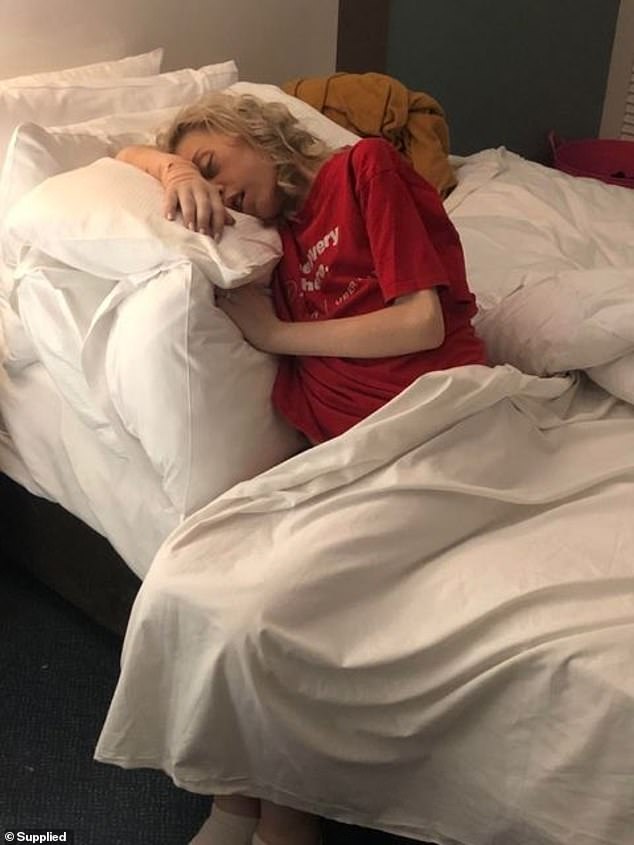 Ashleigh and her family have launched legal action against two practitioners.

‘I would do anything or give anything to have Ashleigh in my life forever she is not only my daughter but she is my best friend.

Mr Simrajh said the legal case is not about money but is instead about the doctors ‘owning up to their errors and taking responsibility’.

He hopes to spread his daughter’s message: Get your skin checked and trust your instinct.

‘If you don’t feel like the doctors are doing the basic things like a biopsy get someone else to check it as well,’ he said. 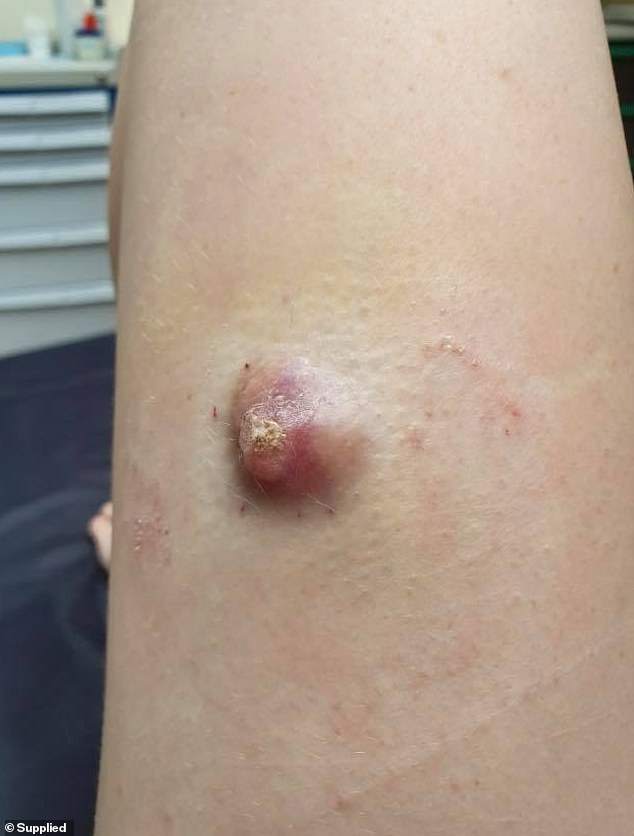 Overtime, Ashleigh’s bump became painful when she knocked it and she knew something wasn’t right

Ashleigh was sent a letter from Prime Minister Scott Morrison thanking her for her efforts in reminding Australians about the dangers of skin cancer.

She also received a phone call from Premier Annastacia Palaszczuk ahead of her nuptials on Saturday.

‘The PM heard about it and wrote her that awesome letter that gave her the strength to go on that was such a kind thing to do and meant so much to her,’ Mr Simrajh said.

‘Annastacia called her personally and sent flowers on her wedding day. She even gave Ashleigh her mobile number so Ash could send her wedding pictures and to reach out to her if she needed anything.

‘Ash has had so many messages of support and also people who have had their skin rechecked to find out that they have melanoma as well Ashleigh has saved lives she really has.’

The wedding was both the happiest and saddest day of Mr Simrajh’s life. 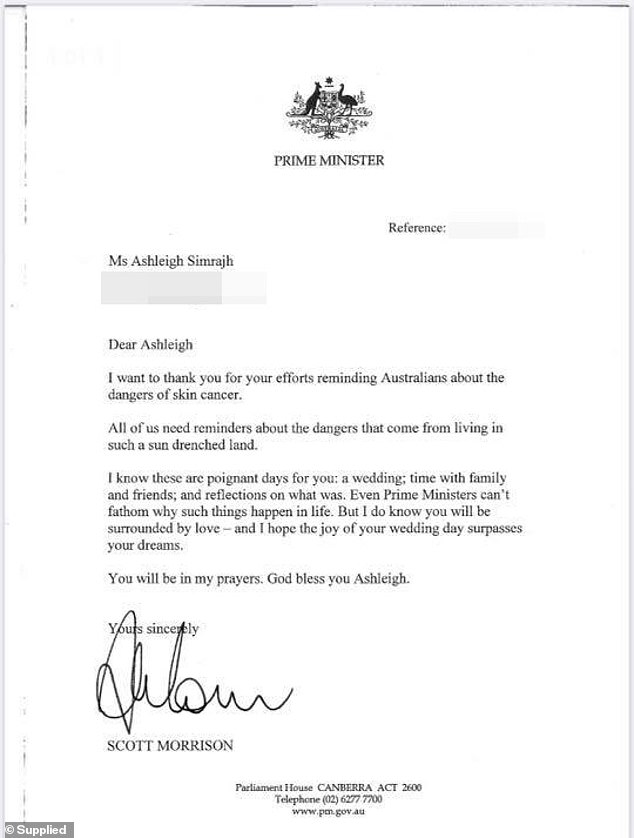 ‘To see her so fragile on what should have been her happiest day was heartbreaking but yet seeing the love that was in the room for her was very inspirational,’ he said.

Ashleigh was ‘depleted’ after the ceremony and she watched the reception from her bed.

Unable to dance because of COVID-19 restrictions, Ashleigh and her father listened to Count On Me by Bruno Mars as their father/daughter dance.

‘The guests really belted it out while I tried in between crying while her mother Tracey and sister sat holding her hand. It brought a smile to her face,’ he said.

The family have a GoFundMe page to share Ashleigh’s story and spread her message.

‘Ashleigh is 23 years of age and has terminal cancer due to a GP and specialist not conducting basic tests like a biopsy,’ the page reads.

‘She is on a mission to get her story out there for young people to get checked but also to get another doctor to have a look at it if you are still not sure. That would have saved her life if she did.’ 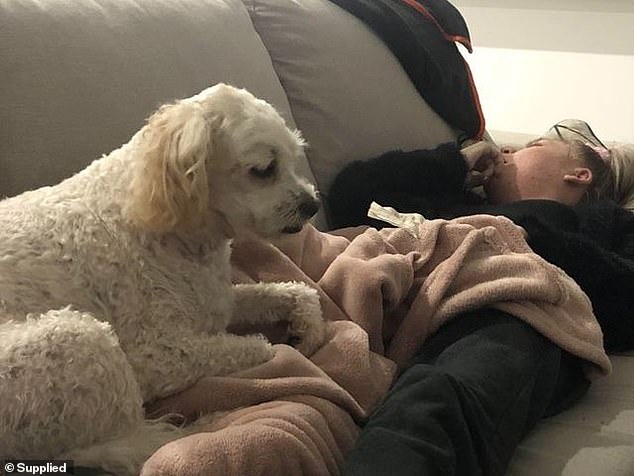 The family have a GoFundMe page to share Ashleigh’s story and spread her message. ‘Ashleigh is 23 years of age and has terminal cancer due to a GP and specialist not conducting basic tests like a biopsy,’ the page reads