Hundreds of revellers hit the town in Newcastle tonight to sink their final pints before a 10pm curfew, meanwhile partygoers in Leeds are making the most of what could be their final weekend of freedom as the city teeters on the brink of its own lockdown.

Students and young people appeared undeterred by the new early curfew as they flocked to Big Market – a popular area with bars and pubs in Newcastle – in the early evening and knocked back drinks.

Young women were pictured laughing and saying cheers with their final pints before being kicked out by bar staff at 10pm. Some revellers were clearly not done with the night’s partying and were seen picking up booze from local convenience stores after the pubs shut up shop.

Meanwhile in Leeds people took to the streets in droves as the city faces its own lockdown after a surge in coronavirus cases. Groups of people gathered in the city centre and queued for bars, as bouncers used temperature guns on patrons as part of new safety measures.

Tough new restrictions to control the spread of coronavirus were announced for the North East of England last night, ahead of further rules which were unveiled today across parts of the North West, Midlands and West Yorkshire.

The latest measures, which include a 10pm curfew on pubs and bars, will affect Newcastle, Gateshead, Sunderland, Northumberland, South Tyneside, North Tyneside and County Durham from tonight. 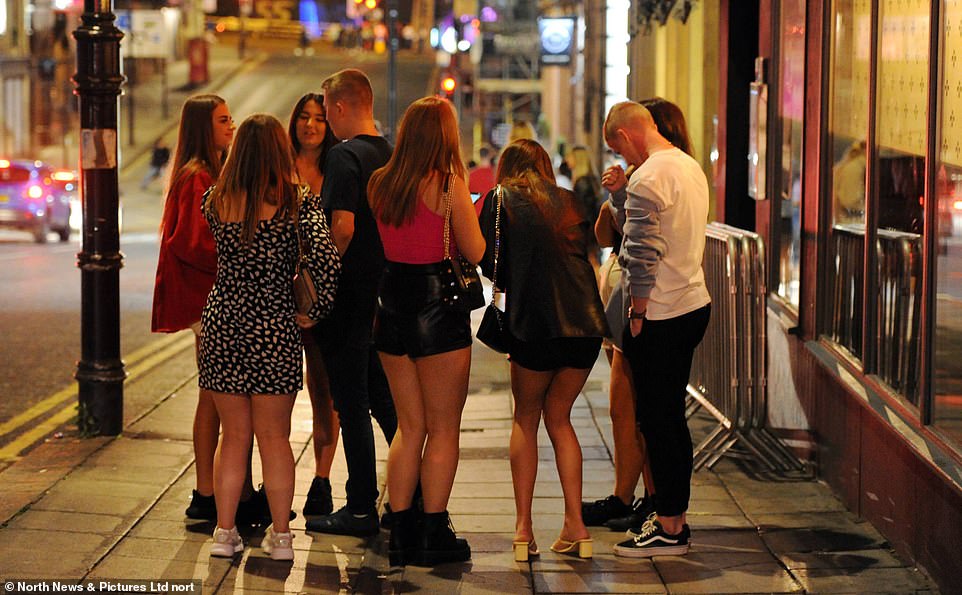 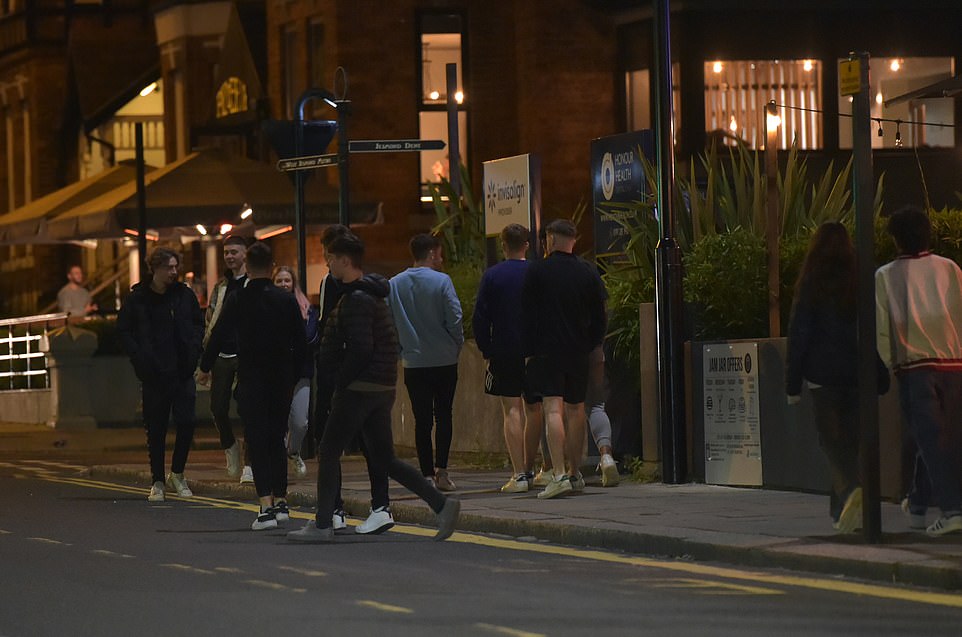 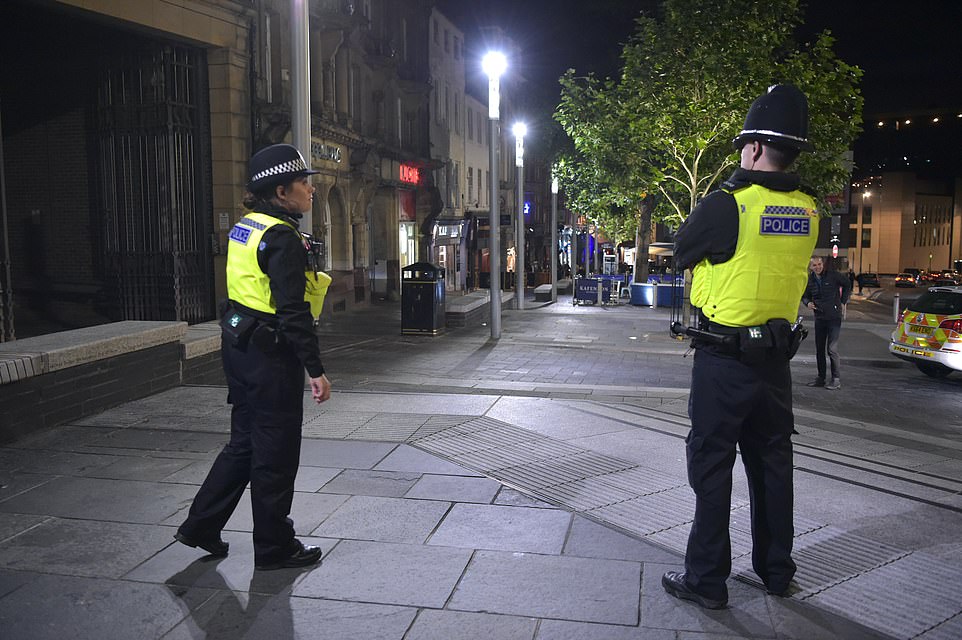 Police officers survey the normally heaving Big Market area of Newcastle. Pubs are closing at 10pm due to a new localised lockdown to battle the pandemic 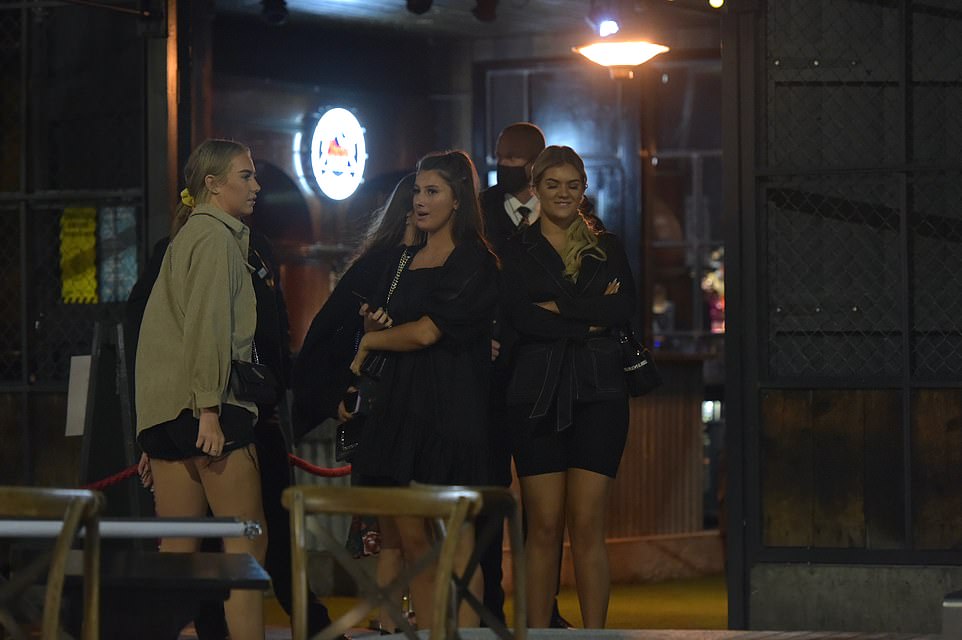 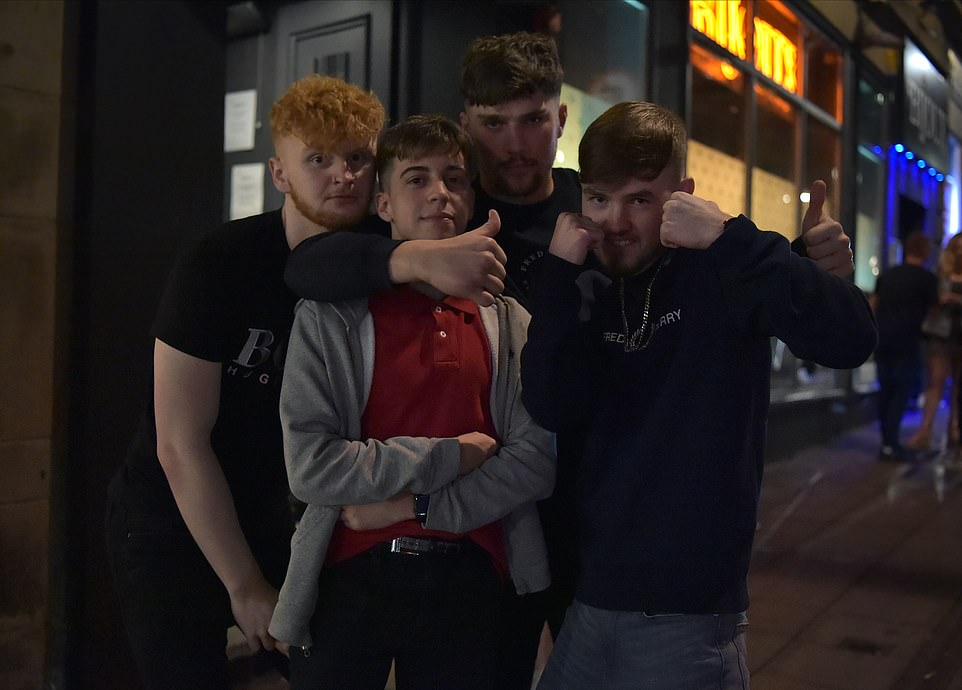 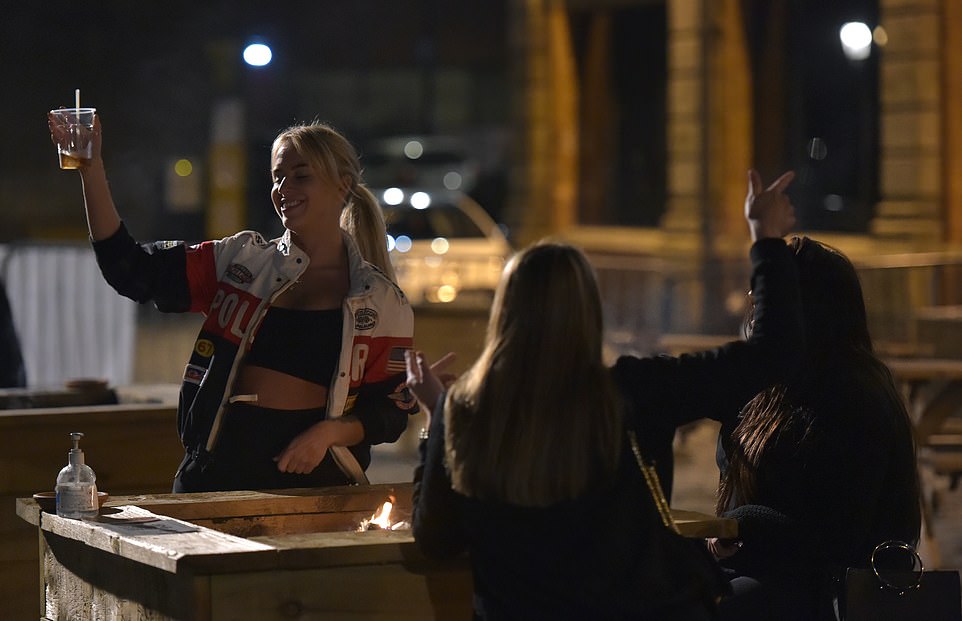 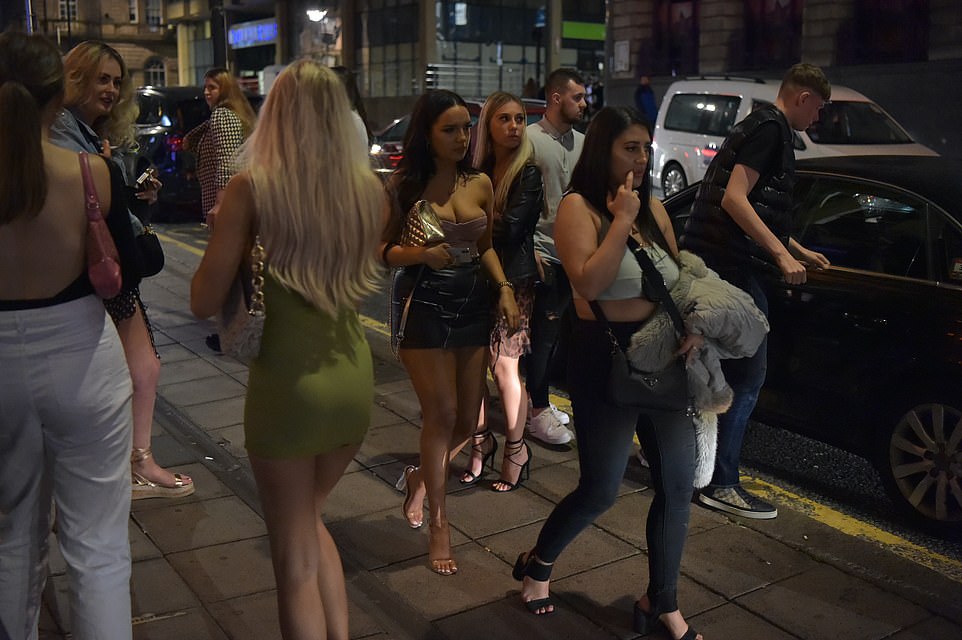 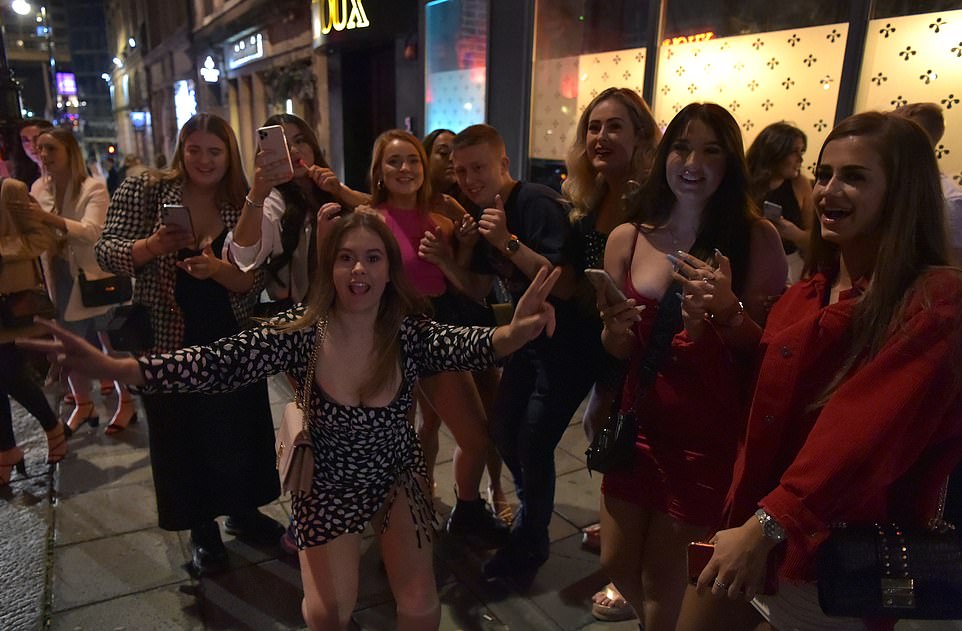 Similar lockdown measures will then come into force in Lancashire, Merseyside, Warrington, Halton, Wolverhampton, Oadby & Wigston, and parts of Bradford, Kirklees and Calderdale from Tuesday.

Residents in these areas are banned from socialising in homes or gardens with people outside their household or ‘bubble’ and food and drink venues are restricted to table service only. Restaurants, bars and pubs will have to close between 10pm and 5am.

Drinkers last night flocked to watering holes across the North East for a final night of carnage after Health Secretary Matt Hancock confirmed the region would be hit by a 10pm curfew on pubs and bars starting tonight.

Those in Newcastle, where 40,000 university students are expected to return in the coming days, were photographed in close proximity outside busy clubs and bars despite the growing numbers of Covid-19 cases in the area.

Similar scenes were spotted in Leeds last night, as rising numbers of infections in the city prompted warnings the it may soon head in the same direction as other parts of West Yorkshire with additional restrictions. 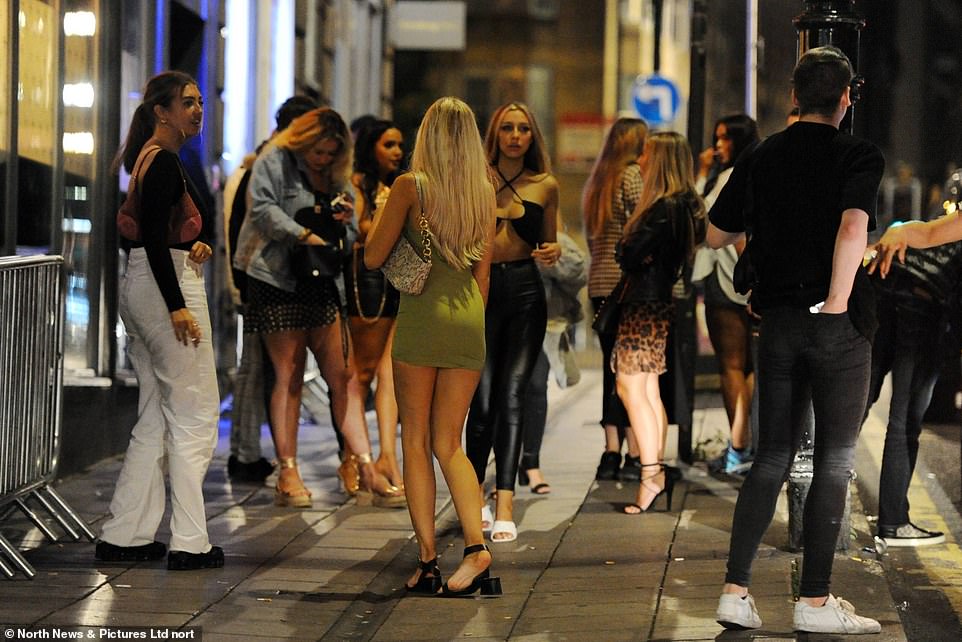 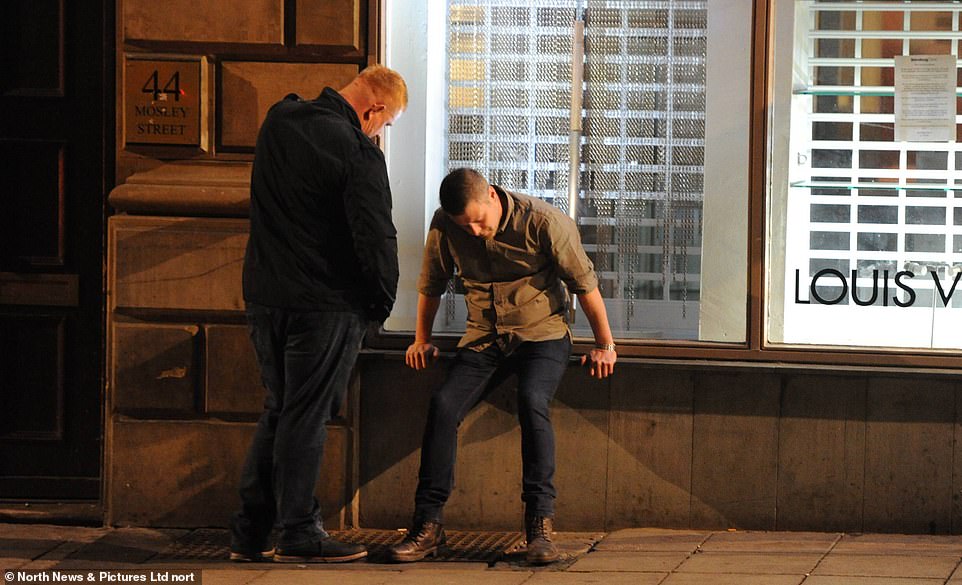 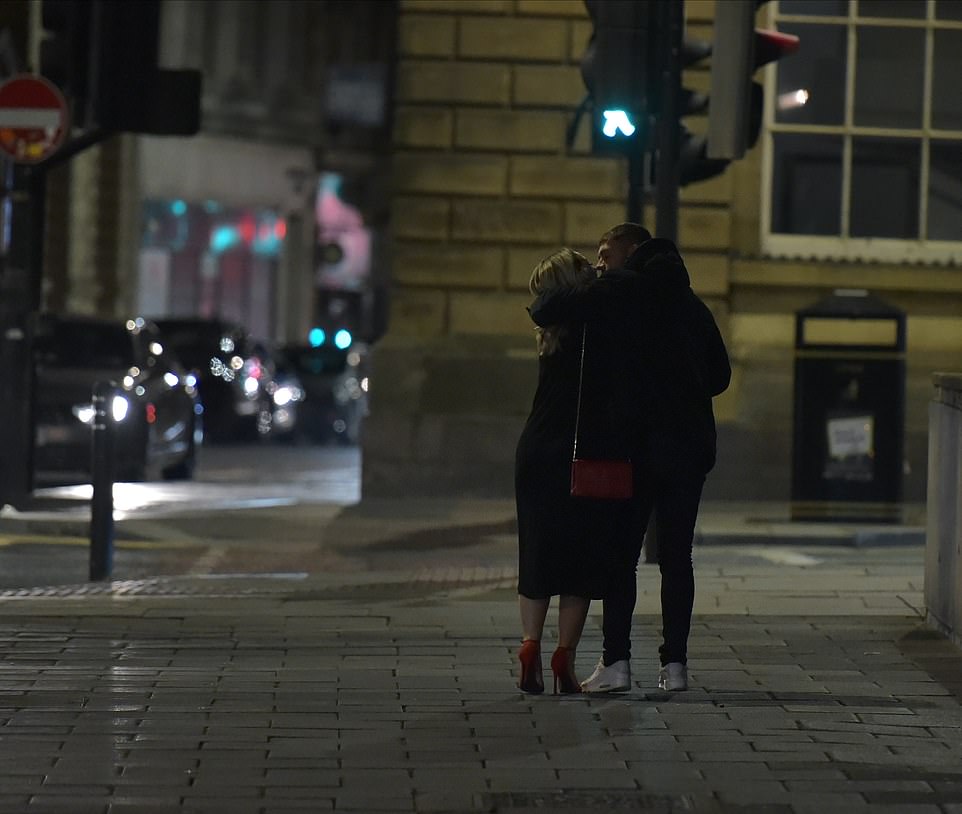 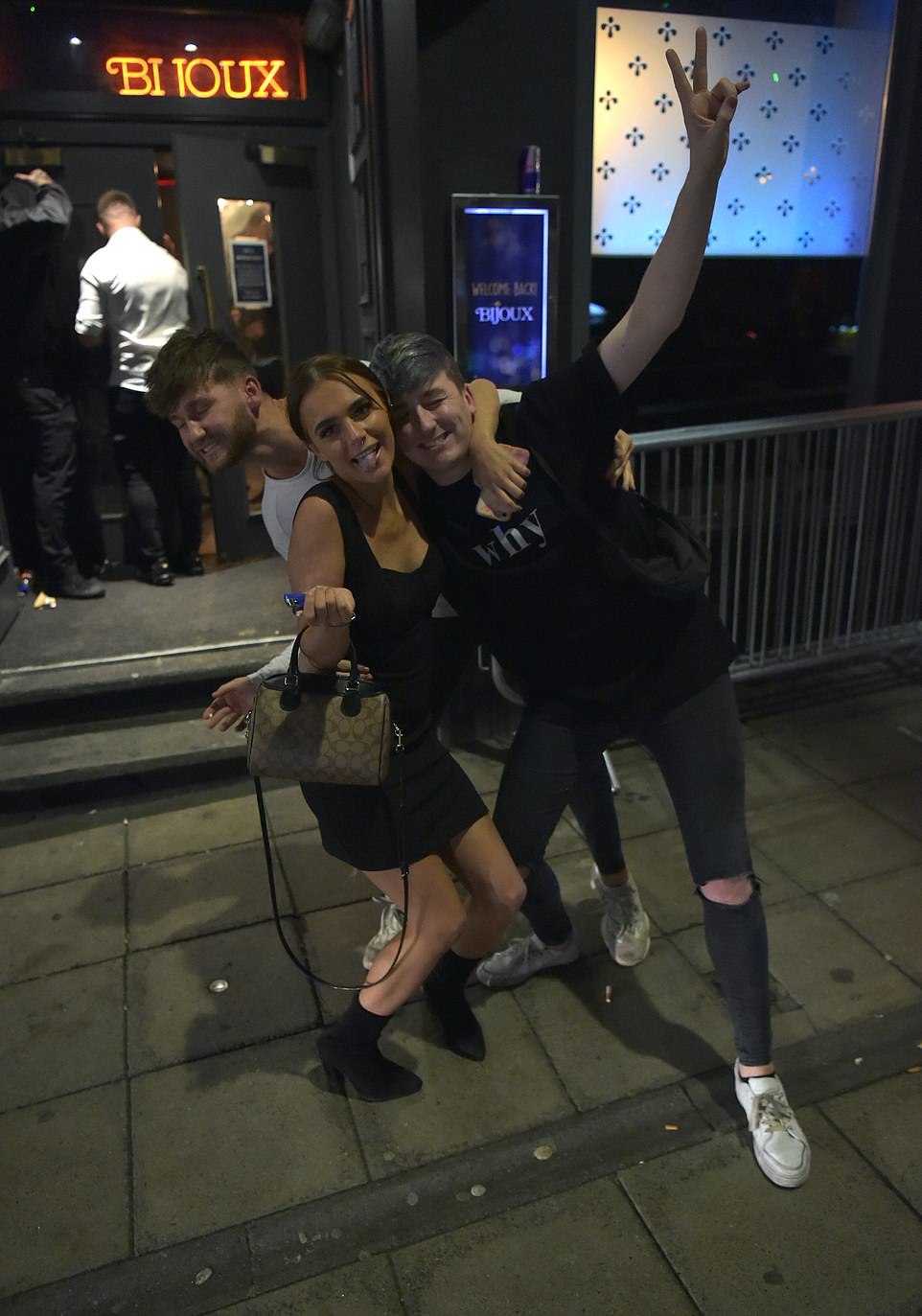 Three friends joke around as they leave a pub in Newcastle this evening. The new curfew in the city has been imposed by the government after a rise in coronavirus cases 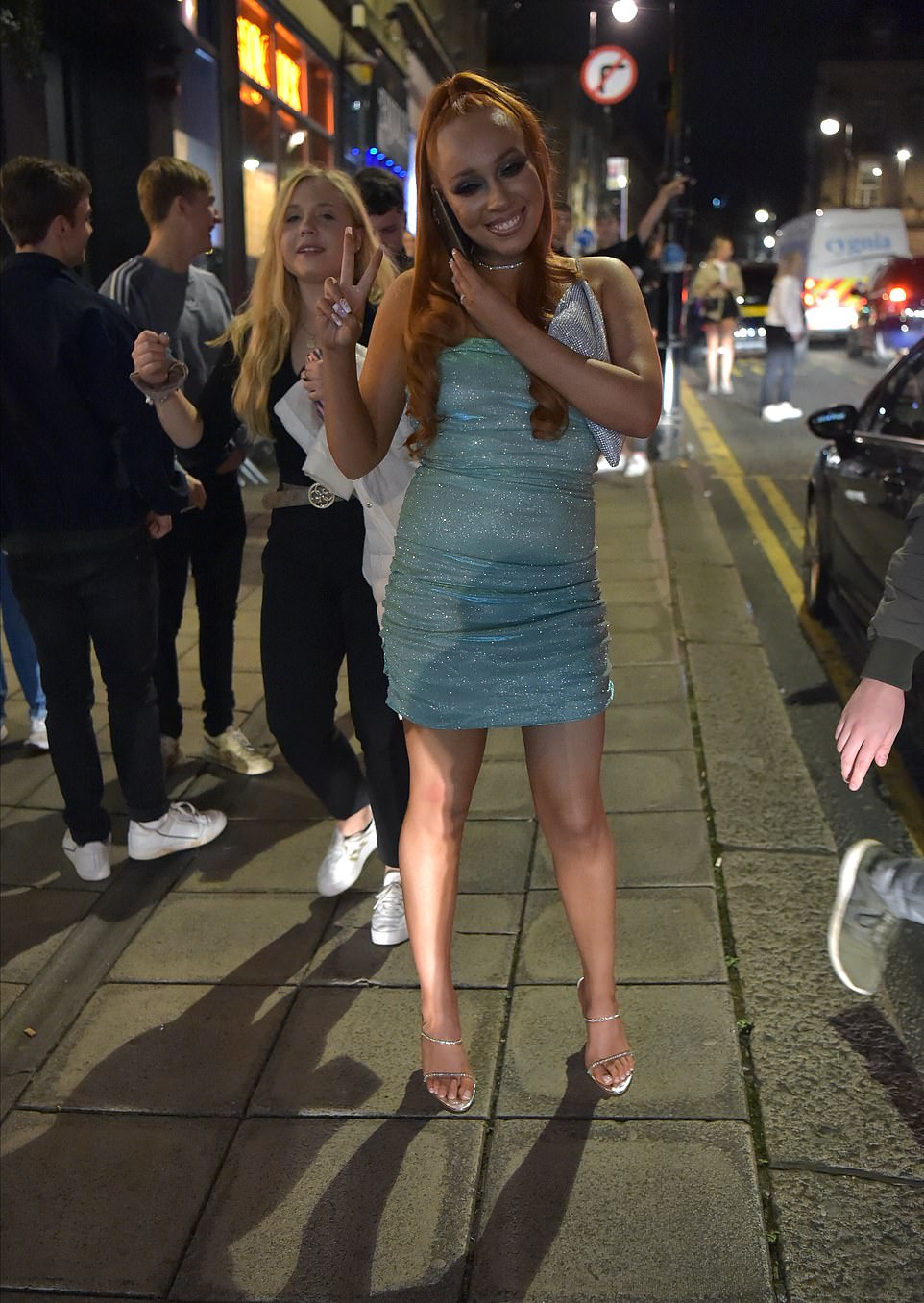 Young people enjoyed a night out in Newcastle tonight, but it was enjoyed at 10pm due to a newly imposed curfew 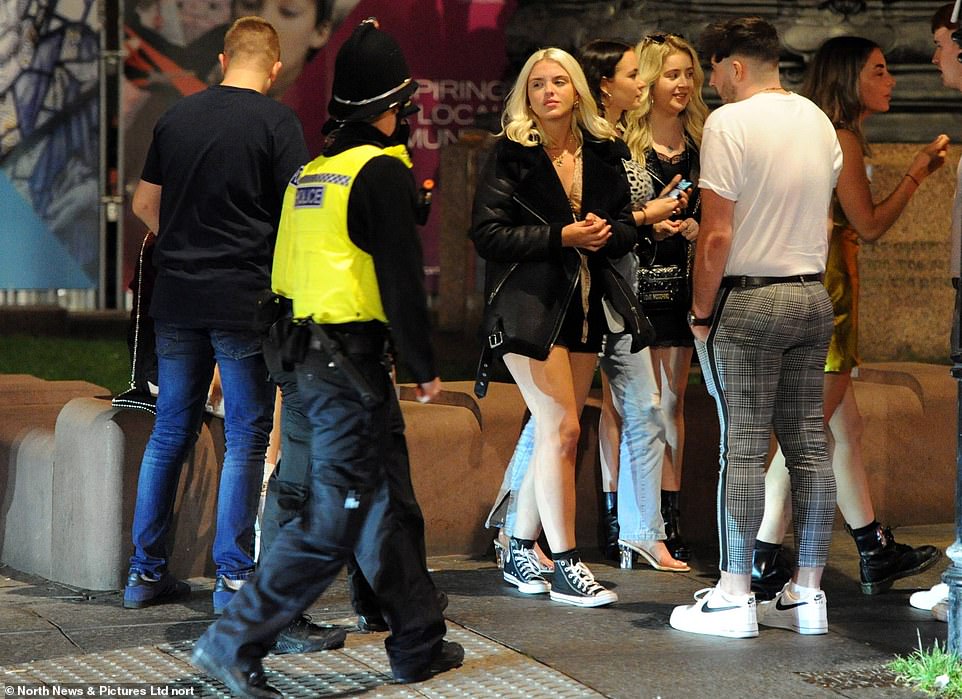 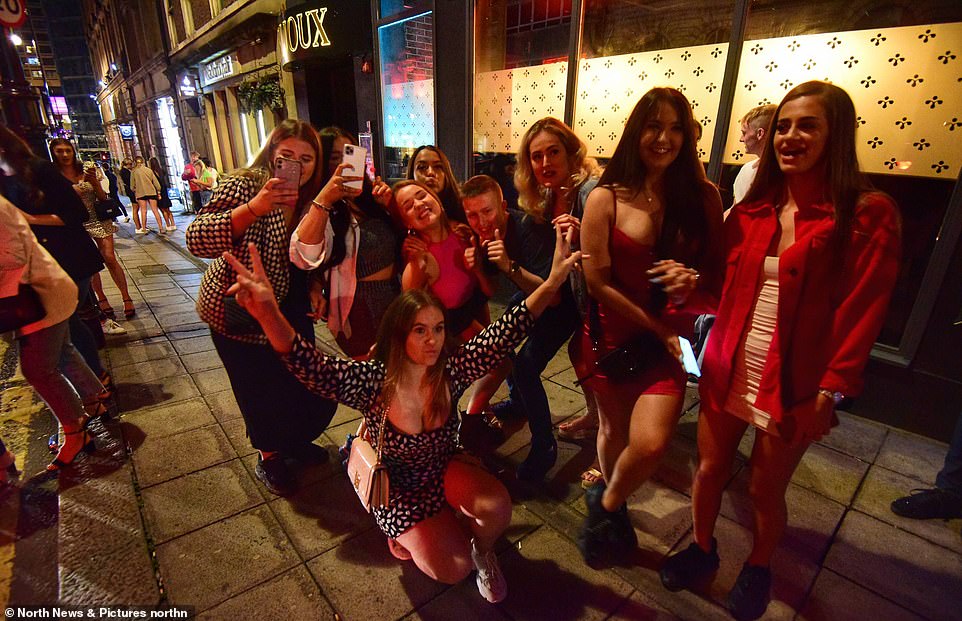 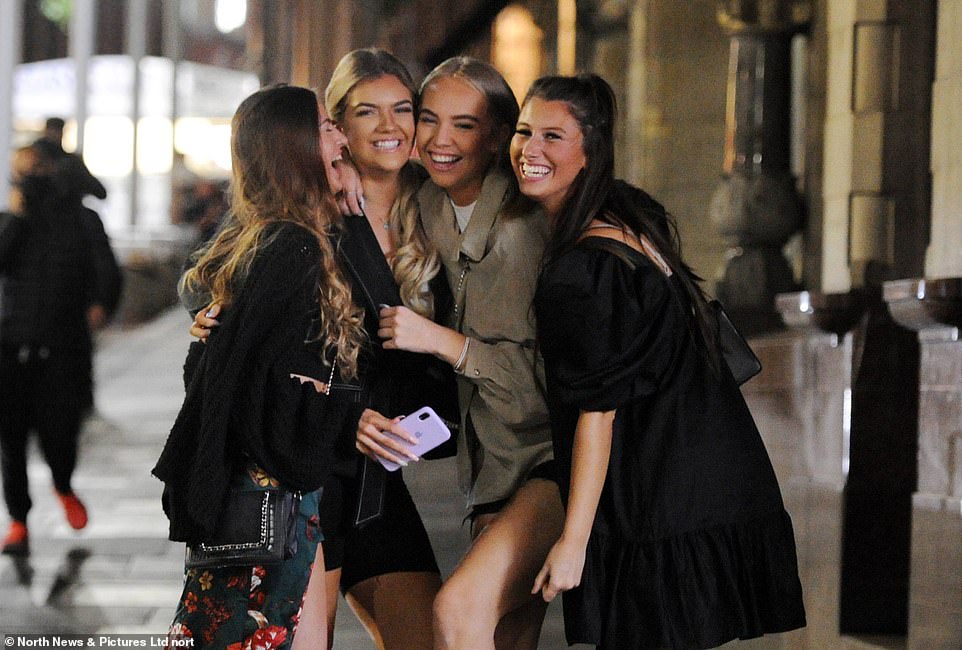 Leeds recorded its highest ever daily increase of Covid-19 cases yesterday, with the city confirming a further 117 infections. The largest rise ahead of this figure was reported on April 22, when 109 cases were detected.

The streets were also busy in Birmingham last night as university students moved back to the city – despite households in the area having been banned from mixing following a spike in coronavirus cases last week.

Those in the city and neighbouring areas Sandwell and Solihull are not permitted to meet others outside their household or social bubble under the rules, either indoors or in private gardens.

Birmingham had seen its infection rate more than double to 90.3 cases per 100,000 ahead of the measures, which affect more than 1.6 million people in total.

The increased measures, which were announced today across parts of the North West, Midlands and West Yorkshire, will mean a total of 12million people are now under lockdown restrictions across Britain.

It comes as Mr Hancock today admitted that a new national crackdown is on the cards as he warned infections are ‘accelerating across the country’ and more people will die due to the pandemic.

The Health Secretary pleaded with the public to ‘come together to tackle this virus’ as ministers consider imposing draconian restrictions for a fortnight in a ‘circuit break’ to stop the spread.

The move could come as soon as next week, with pubs, restaurants and hotels across Britain facing being shut to prevent ‘significant’ casualties. 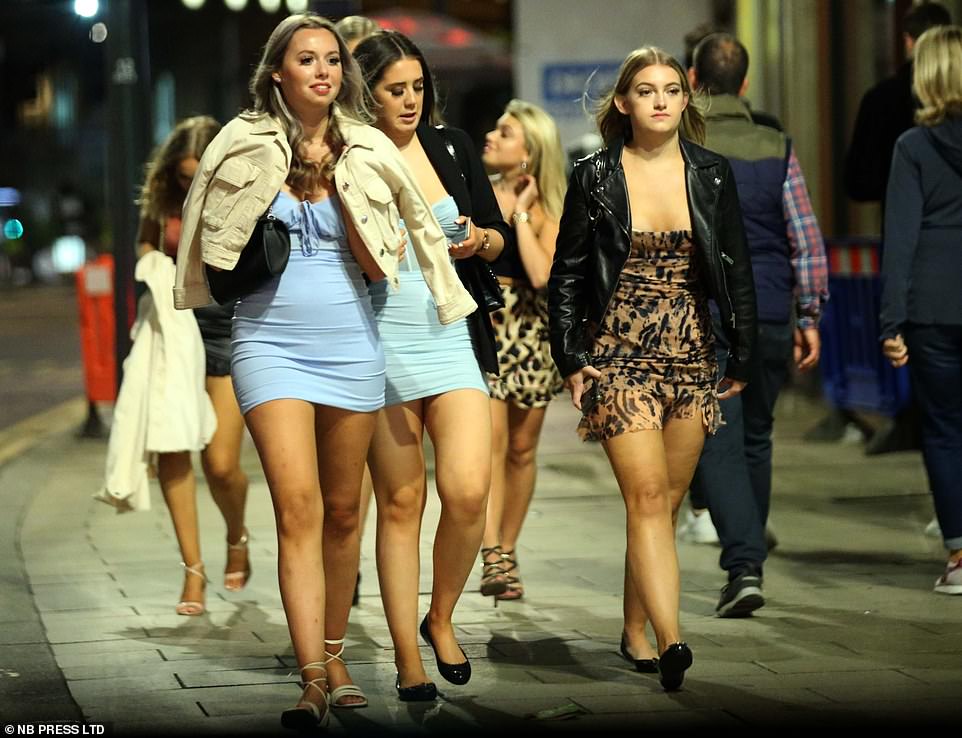 Revellers also headed out tonight in Leeds which does not currently have a local lockdown, but is at risk of one being imposed after a rise in Covid-19 cases 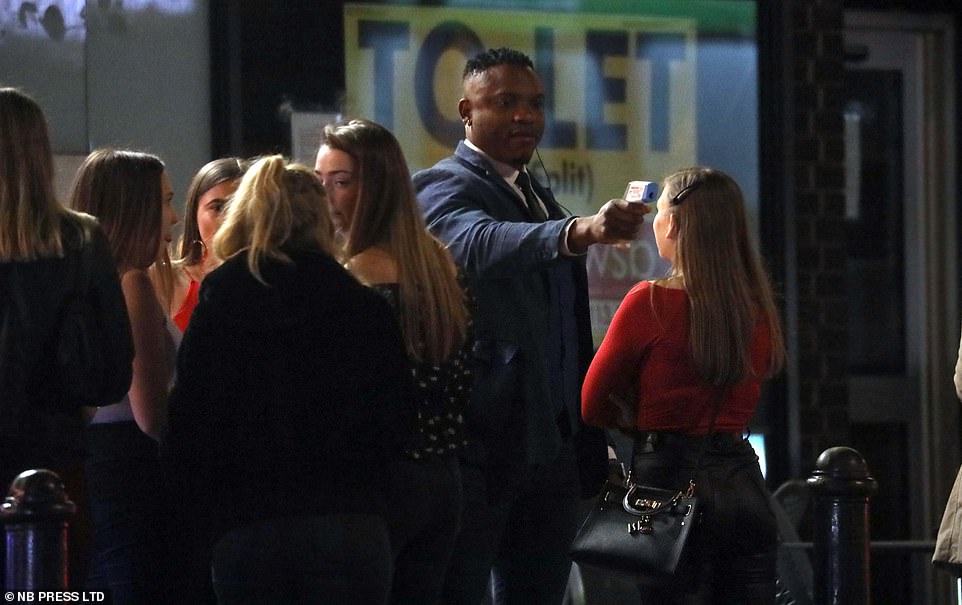 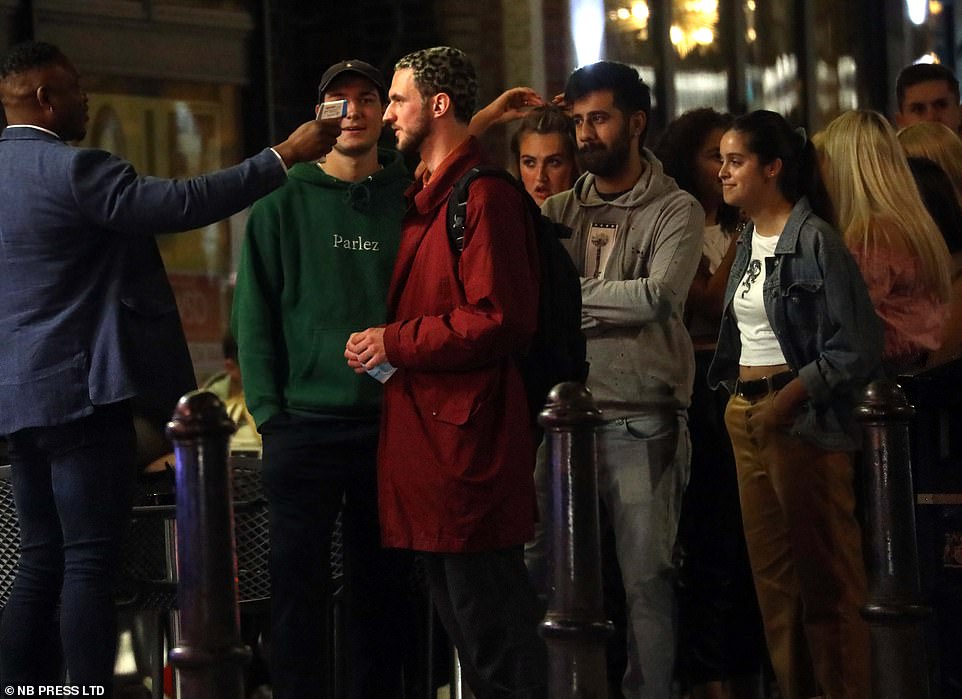 Speaking today, Mr Hancock said a national lockdown was the ‘last line of defence’. But he warned that it was a ‘big moment for the country’ with cases now doubling every eight days, and unless the ‘Rule of Six’ restrictions worked more would have to be done.

Around 12million people across the UK are now in areas of intervention, including parts of Greater Manchester, Leicester and Scotland. But neither Middlesbrough and Hartlepool in the North East, two other authorities officially named as a hotspot by Public Health England, were hit by new measures announced yesterday.

Increasing numbers of infections in London and Leeds have also prompted warnings the cities may soon head in the same direction as the North East with additional restrictions. And in North Yorkshire ‘full emergency mode’ has been declared after cases surged by 167 per cent in the first week of September.

It is also feared the thousands of students returning to universities in the North East could cause the soaring infection rate to rise even further despite the draconian measures. Around 40,000 students are expected to flock back to Newcastle University in the coming days, as well as nearly 20,000 to Durham University.

Sean Southern from The Gateshead Arms yesterday told MailOnline of the impact the new restrictions are likely to have on business.

‘Those hours are absolutely crucial for us, and probably our busiest time for those who want to have a few drinks before going further afield or going home.

‘There’s a few bars in the area which have closed down over the last few weeks and so we’ve sort of taken on those customers as well as our regulars recently. 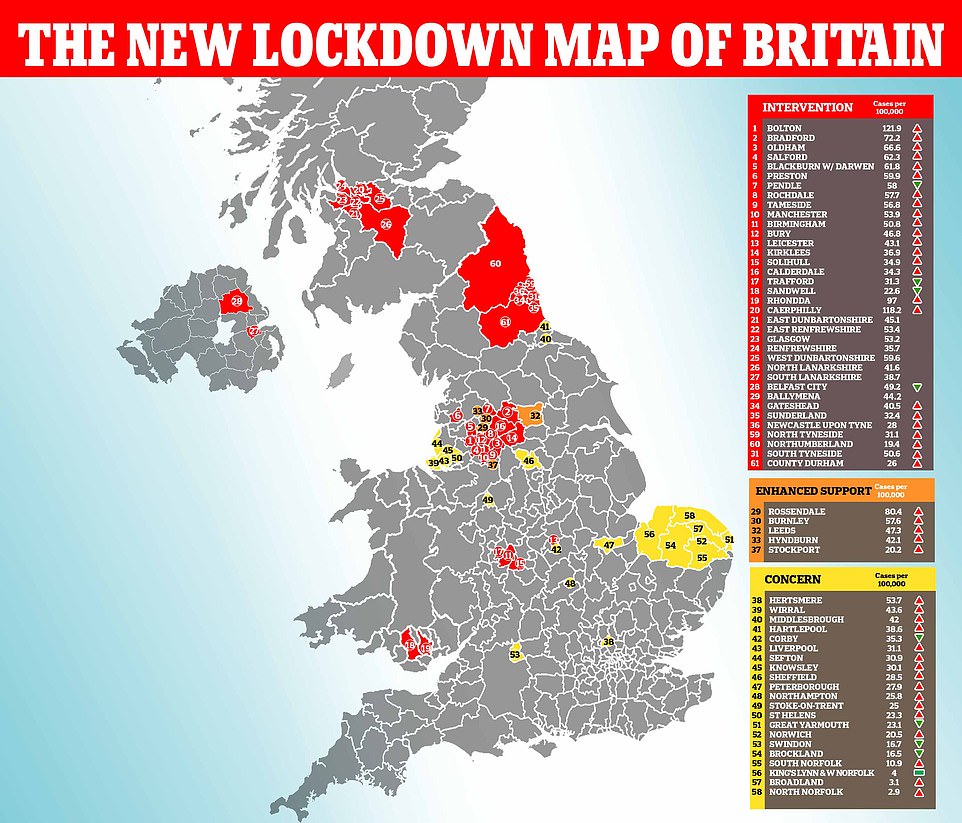 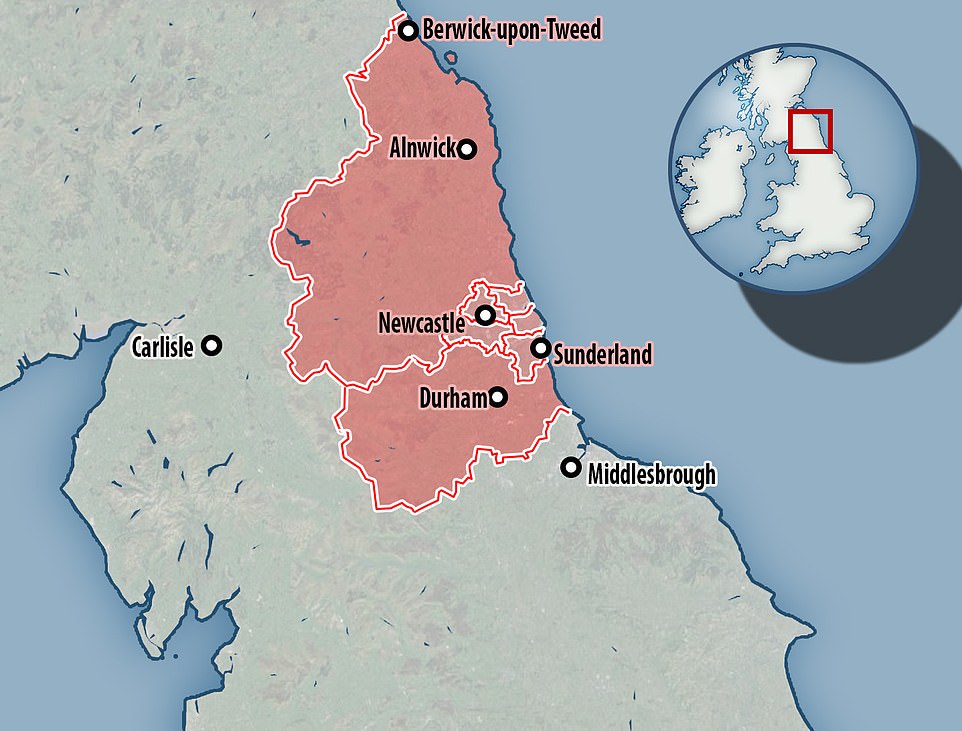 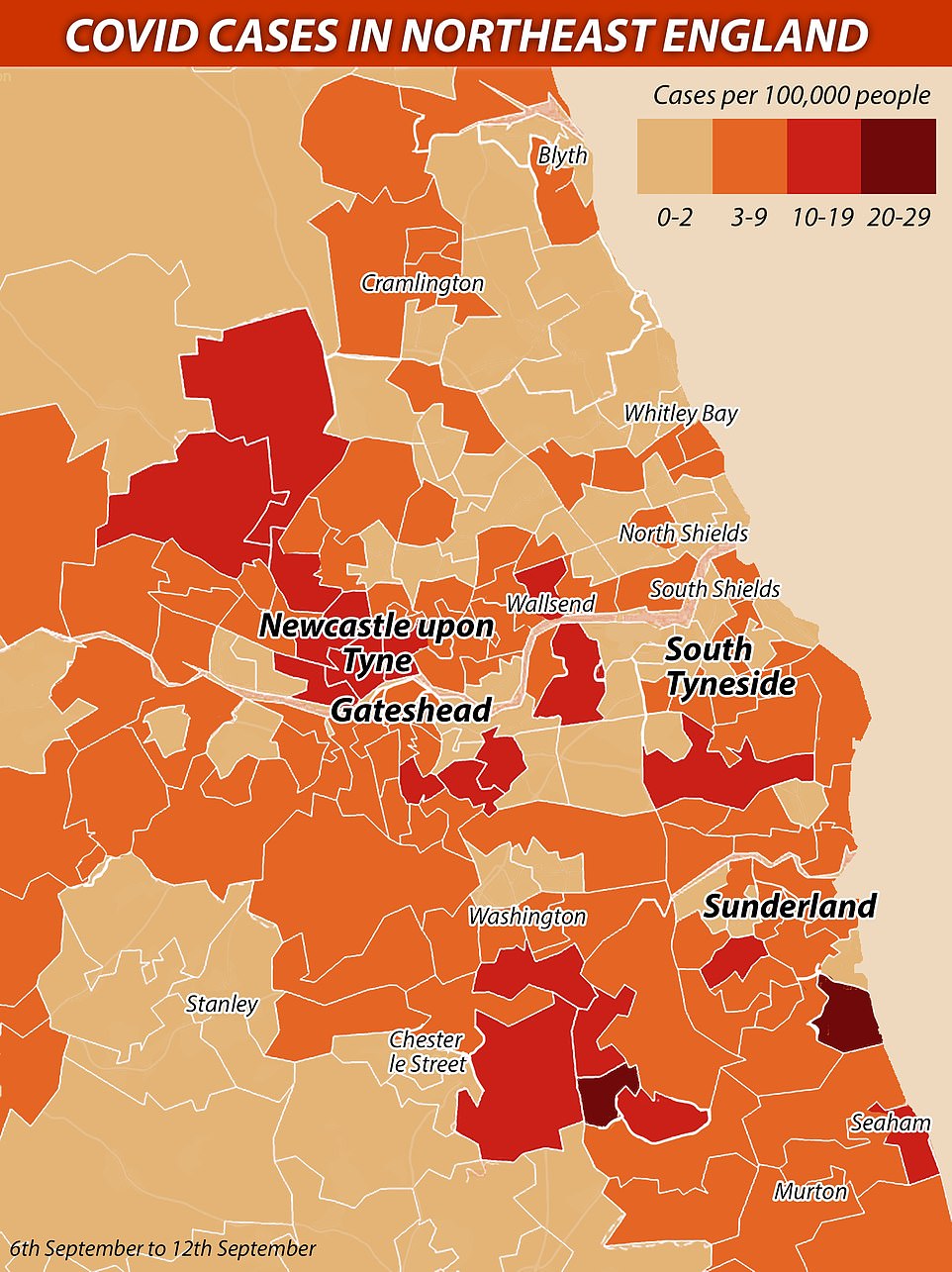 Coronavirus cases have been increasing rapidly across NE England. Newcastle has recorded a sharp rise in its weekly infection rate, up from 51.2 cases for every 100,000 people to 64.1 in the seven days to September 13

‘Things seemed to be getting better and then all of a sudden we’re told last night that there’s going to be big changes and we haven’t really had time to prepare.

‘People forget that closing at 10pm also has an impact on staff who might have wanted to pick up a few extra hours.’

Some 2,350 pubs and restaurants ware affected by the measures, according to real estate adviser Altus Group.

Speaking about the number of Britons under lockdown rules hitting 10 million, shadow health secretary Jonathan Ashworth said: ‘Labour warned months ago that unless the Government spent the summer fixing the testing regime then we would face a bleak winter.

‘The Government ignored that advice, the testing regime is collapsing and so it is not surprising national restrictions are back on the table.’

Police said they will enforce the lockdown measures as a last resort.

Superintendent Steve Long, of Durham Constabulary, said: ‘The Government has announced that further local restrictions are necessary in addition to those already in place nationally. 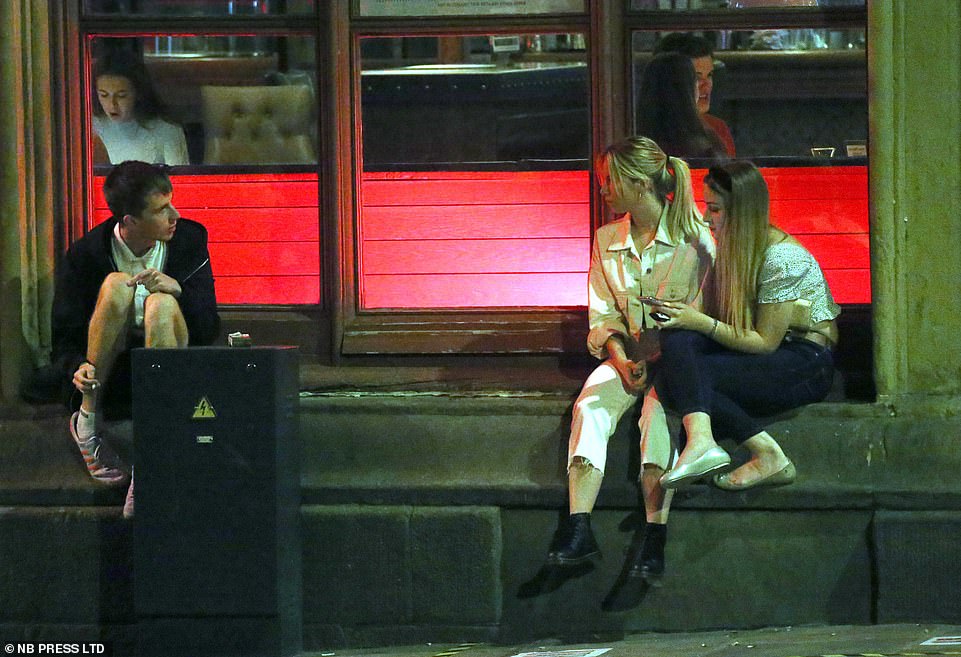 The Government’s chief science and medical officers today warned that another serious outbreak of coronavirus could lead to a significant number of deaths by the end of next month. Pictured: Leeds 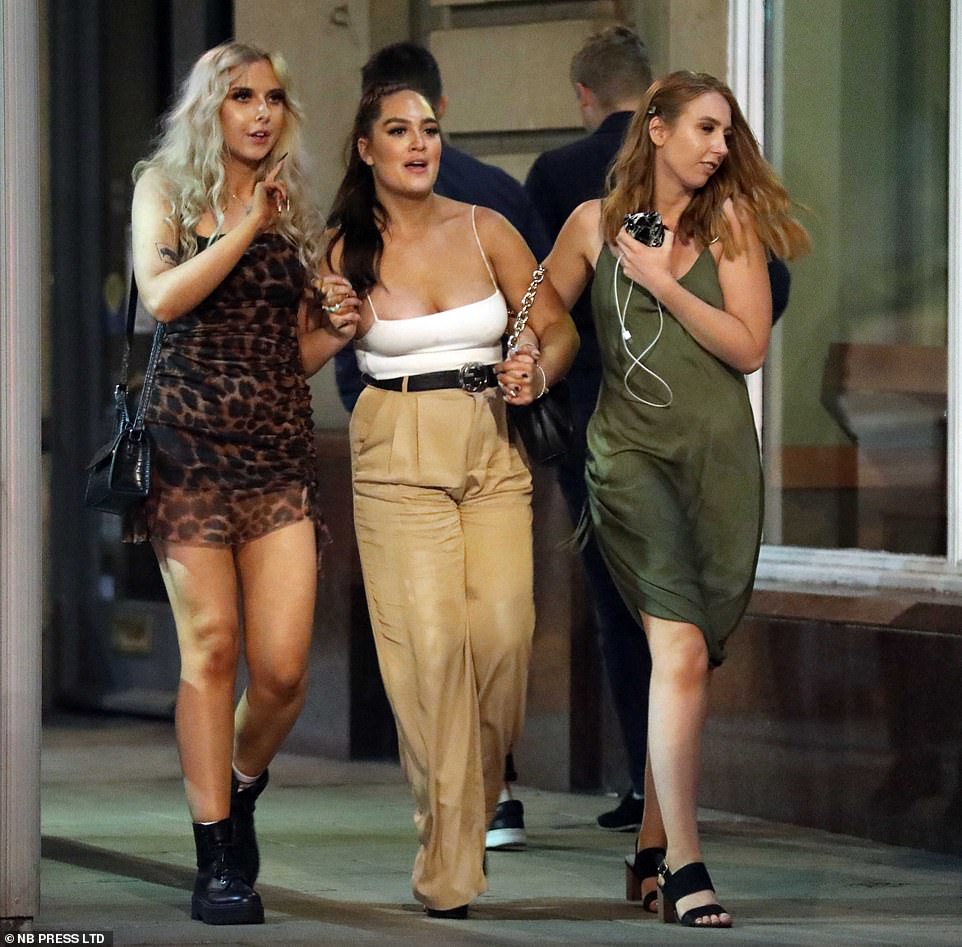 Although there has been no final decision on new ‘circuit break’ measures, the BBC said they could involve the closure of key hospitality businesses for a fortnight. Pictured: Leeds 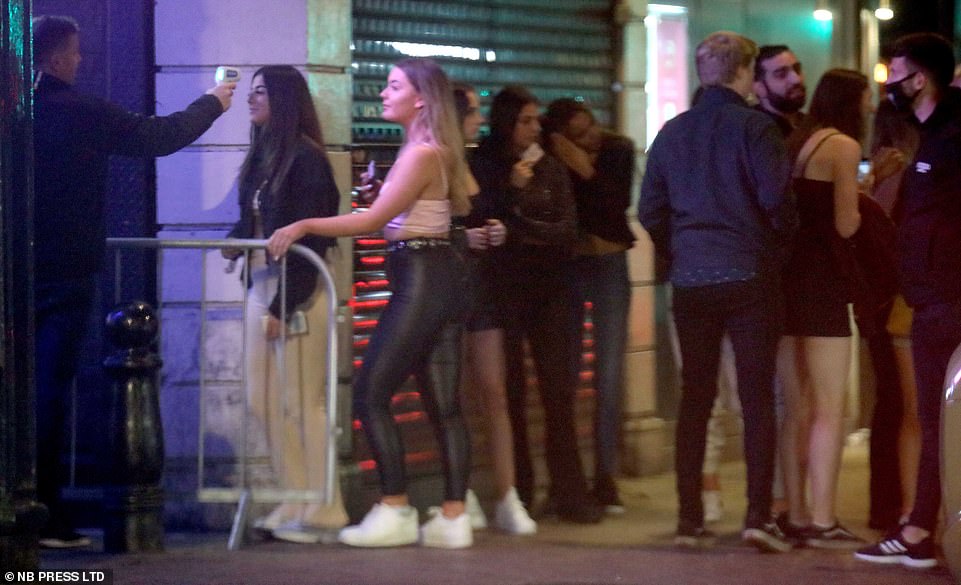 Pictured: Partygoers have their temperatures checked before entering busy clubs in the city centre on Thursday night 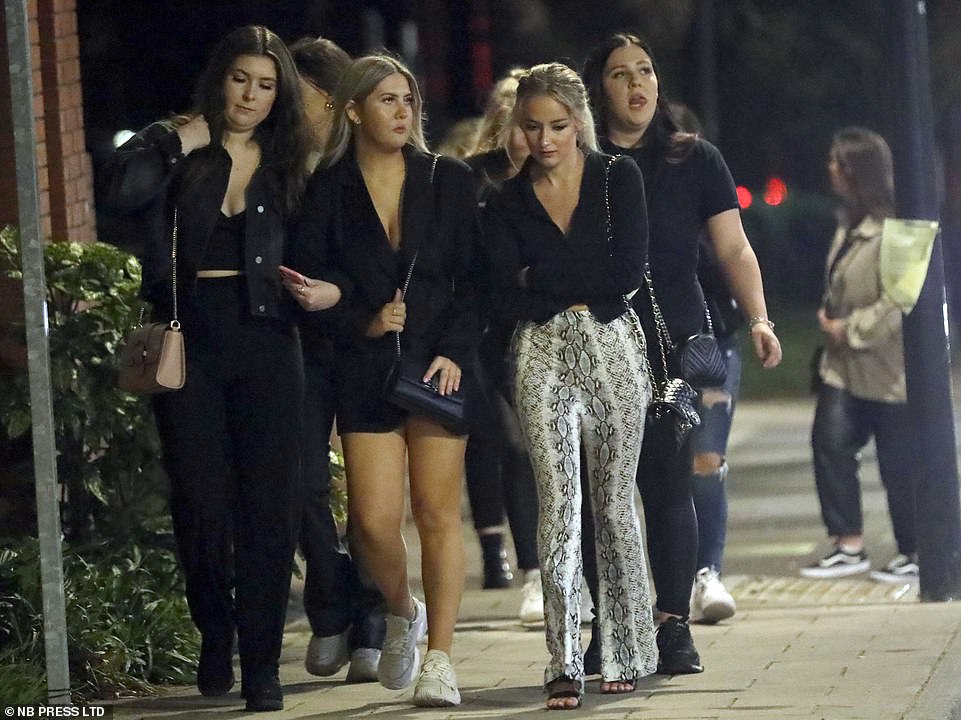 ‘We would like to thank the vast majority of people who have taken personal responsibility, done the right thing and stuck to the guidance over the last few months.

What are the new restrictions for the North East?

People have also been advised to adhere to the following guidelines:

The Health Secretary said they were necessary to stop the spread of the virus and prevent another lockdown.

‘Our officers will continue to engage with the public, explain the new regulations and encourage people to act responsibly: only then will we move to enforcement as a last resort.’

Announcing the drastic new measures in the House of Commons, which come into force from midnight, Mr Hancock said: ‘I know, the whole house knows, that these decisions have a real impact on families, businesses and local communities.

‘I can tell everyone affected we do not take these decisions lightly. We agree with the local councils that we must follow the data and act, and the data says we must act now, to control the virus and keep people safe. I know the people of the North East will come together to beat this virus, and beat it we must.’

He added: ‘We’ve seen concerning rates of infection in parts of the North East. Sunderland, for example, now has an incidence rate of 103 positive cases per 100,000 population. And in South Tyneside, Gateshead and Newcastle, figures are all above 70.’

The Government’s chief science and medical officers today warned that another serious outbreak of coronavirus could lead to a significant number of deaths by the end of next month.

Although there has been no final decision on new ‘circuit break’ measures, the BBC said they could involve the closure of key hospitality businesses for a fortnight.

Schools and most workplaces would stay open, but pubs and restaurants could have their opening hours restricted.  The idea of conducting the lockdown over the half-term holidays has also been mooted.

The drastic steps are on the table as concerns grow about the shambolic testing system, with claims the Government’s seven ‘lighthouse labs’ are in chaos due to shortages of staff and equipment.

A leading scientist warned that ‘testing is dying on its a**e’, adding he was ‘appalled by what I saw’ at the labs.

The unnamed scientist warned rising coronavirus levels could ‘break the NHS’, criticising the Government’s test-and-trace system by warning it was ‘creaking at the seams’.

Speaking on Wednesday, Boris Johnson told a committee of MPs: ‘I don’t want a second national lockdown. I think it would be completely wrong for this country and we are going to do everything in our power to prevent it.’