Zoe Ball prides herself on a relentlessly perky broadcasting style which some of her listeners find a touch hard to take first thing in the morning.

But this week, as outrage has flared over the disclosure of her gigantic £1.36 million BBC salary, she has carried on regardless. ‘Keep your good news stories coming in, people,’ she urged. ‘Busy show today.’

There has been no mention, significantly, of her own considerable good news, which is that she is now set to usurp Gary Lineker as the best paid person at the BBC.

It works out at nearly £1 for every one of the million listeners who have switched off since she replaced Chris Evans. She’s wise to try not to rub in her good fortune as reaction has been somewhat negative.

One licence-fee payer wrote: ‘Nothing against her personally but can someone please explain why Zoe Ball is worth 60 times more than my daughter who is a staff nurse on an NHS critical care unit?’’

Another joked: ‘Finally, I can legitimately contribute towards Zoe Ball’s lavish lifestyle without resorting to posting cheques to her manager.’ 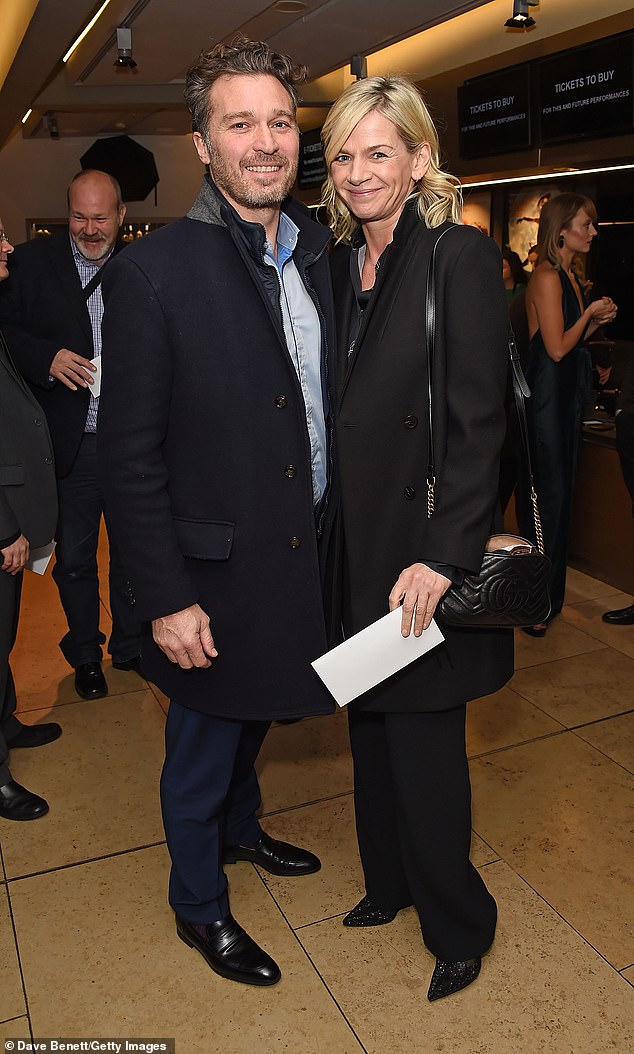 Zoe Ball Zoe shared a picture of her moving crew on the day she moved in — and at the front of the picture was her boyfriend, Michael Reed. (The pair are pictured, above) 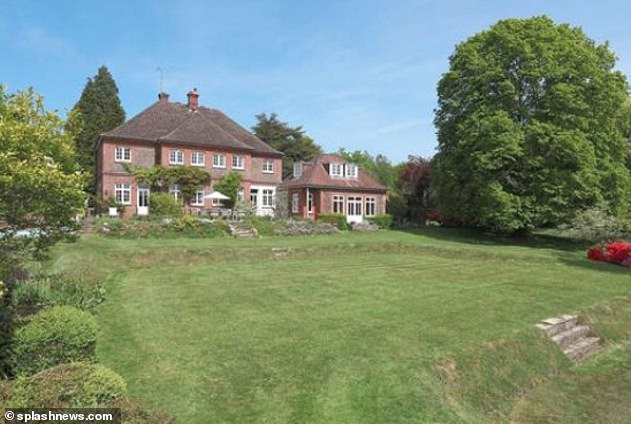 At the time she was appointed — but before the salary was disclosed — she said that she was ‘really pleased with what the BBC are going to pay me for this job . . . I hope my female peers will be happy that I got the deal that I did. I do think, of course, that men and women should be paid the same.’

You can see how she could argue that she has only been paid fairly compared with her predecessor, Chris Evans.

But what does it mean to her? As you might expect, all that lovely licence-fee payers’ money has changed her life.

Her delightful country cottage in Ditchling, East Sussex —which she moved into after splitting from husband Norman Cook — has been sold for £1.25 million, and on August 24 she moved into a grand country mansion in the county. 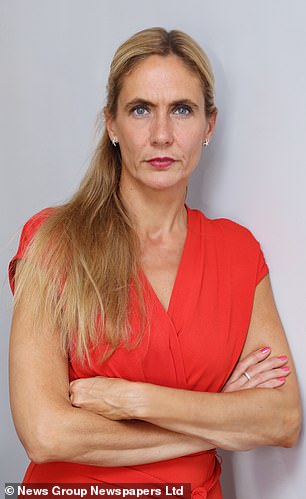 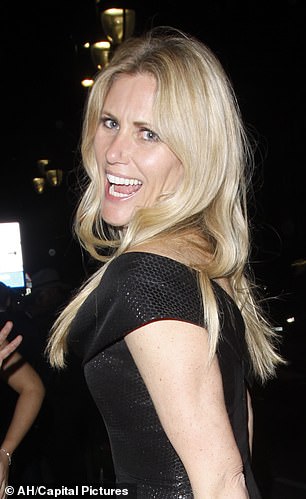 Reed has been in legal dispute with three former lovers — all of them blonde and gorgeous. The most recent court fight was ongoing yesterday with Lorraine Ashdown (left), the mother of his young child. Before that, he romanced model-turned-massage-therapist Carrelyn Gardner (right). They lived together in Chislehurst, and have daughters aged 20 and 15. It is reported the couple had a legal dispute after splitting in 2012 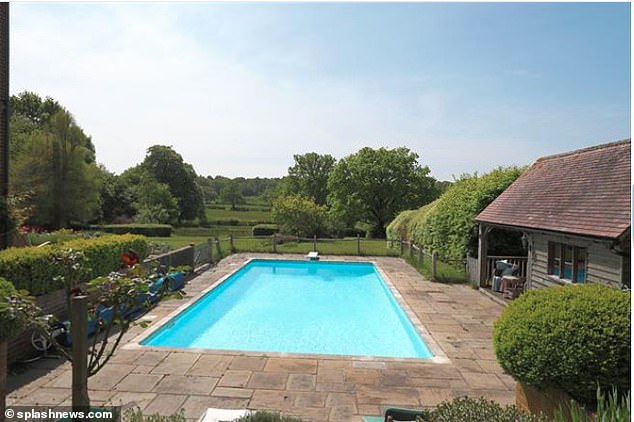 The new home of the BBC star. Reed and Zoe are reported to have moved in together in April. Reed did not respond to requests for comment, and neither did Ms Ball’s agent

The six-bedroom house was built by a Russian aristocrat, Baron Vladimir de Wolff in the 1920s. It has a swimming pool, tennis court and acres of gardens and was on the market for £1.5 million. It will offer more privacy, perhaps no surprise given that her star, and her salary, are so firmly in the ascendant.

You might think it’s a big place for a single woman with a son away at university and a daughter whose care she shares with her ex.

However, there is a new man on the scene to keep her company. Zoe shared a picture of her moving crew on the day she moved in — and at the front of the picture was her boyfriend, Michael Reed. In another snap shared in July, she wrote: ‘My man in a van. Patience of a saint, strength of an ox. On the hottest day of the year. Happy weekend x @michaelreed99’

Handsome Reed, 50, has been dating her for more than two years and she is clearly smitten. They were first spotted enjoying a night out in Soho in December 2017 and  have since holidayed together in Jamaica. They have also been spotted enjoying family time with her children Woody, 19 and Nelly, ten, by Norman Cook, also known as DJ Fatboy Slim.

In the early days of the romance, they spent a weekend at a juicing retreat in Portugal. He has posted a picture of her on social media with the caption: ‘To this one — you make me so happy.’

They are reported to have moved in together in April. Reed did not respond to requests for comment, and neither did Ms Ball’s agent.

Last night one of her well-heeled new neighbours said: ‘We’ve seen Zoe here on a couple of days this week and at the weekend — she’s only moved some of her stuff in so far. Michael’s been helping her.’ Neighbours at the house he is renting in Chislehurst, South-East London, said this week that they typically see him once every few days, often with his young child, who lives nearby.

However, some worry that she might be looking for happiness in the wrong place. For while Zoe has an undeniable talent for making money, Reed seems to have a knack for losing it.

It can also be revealed that he has been in legal dispute with three former lovers — all of them blonde and gorgeous.

The most recent court fight was ongoing yesterday with Lorraine Ashdown, the mother of his young child. She says: ‘I am not in a position to talk to you whilst there are active legal proceedings in the Family Court.’ Earlier this month she accused him of signing on for benefits to avoid paying £20,000 in child maintenance arrears that he allegedly owes.

She says: ‘He’s such a ducker and a diver and a chancer, and I think he has done this on purpose to avoid paying.

In child maintenance agreements, if the ‘paying parent’ is on benefits including Income Support, Jobseekers Allowance and Universal Credit, then they only have to pay a ‘flat rate’ of £7 a week. Reed has called the claims about signing on ‘incorrect’. ‘I don’t know if Zoe is aware of this, but she should tell him to sort it out,’ says Lorraine. ‘It is a disgrace that he is living the high life with her while avoiding his responsibilities.’ 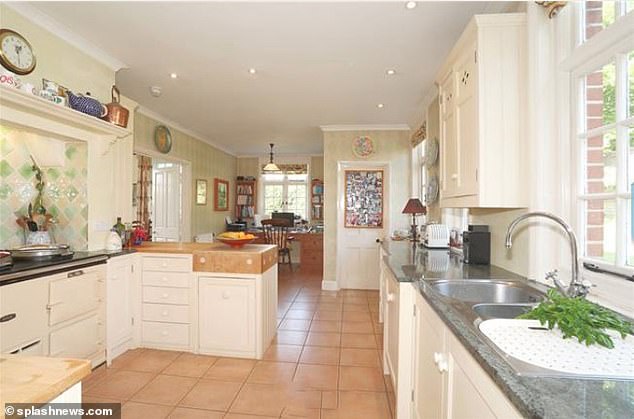 The six-bedroom property was built by a Russian aristocrat, Baron Vladimir de Wolff in the 1920s

A friend says: ‘He’s been a nightmare over child maintenance. Lorraine has had to work since his child was weeks old and it’s been nothing but a struggle while he’s apparently put two fingers up at the system. I imagine he will have talked it around and made Zoe feel sorry for him.’

His weekly payments were set at just £11.82 in 2017 — but Ms Ashdown appealed, insisting he had misrepresented his earnings.

A tribunal this year then ruled Reed should have been paying ten times that sum, making him liable for £19,290.94.

The sum was to be paid in three instalments in April, May and June. But Ms Ashdown, 46, said last month that he had not paid up. In addition to his chequered romantic history, he has been the director of a number of failed businesses, with one going bust only in November last year, owing £26,500 to HM Revenue & Customs.

Incorporated in 2016, it was set up for the ‘development of building projects’. In its first year of filing accounts, to September 2017, it reported net assets of £46,000, but last November went into voluntary liquidation with ‘nil’ to offer preferential creditors and £3,555 owed to trade creditors.

At this point, Zoe was well into her first bonanza year. Nobody could begrudge her a slice of happiness after the tragedy of previous boyfriend Billy Yates’ suicide in May 2017.

After her 2016 split from Norman Cook, she started to date Billy, a cameraman. She felt he was the ‘love of her life’. However, he suffered from depression and, despite therapy and attempts by her to help him, he took his own life in his London flat.

Seven months after the death, while she was deep in grief, she started dating Michael Reed.

At that time, his child with former flame Lorraine Ashdown was only one year old. He had met Lorraine, formerly a TV and radio presenter, three years previously. Within a few months of their dating, she fell pregnant and they split before their child was born.

Before that, he had romanced model-turned-massage-therapist Carrelyn Gardner. They lived together in Chislehurst, and have daughters aged 20 and 15. It is reported that the couple had a legal dispute after splitting in 2012.

Land registry records show Reed has a charge registered against the property which Carrleyn now lives in, dated February 2015. This states it cannot be sold without his permission. She said this week: ‘At this present time, I’m not going to be saying anything.

‘My girls are older, so obviously I want to have respect for them and their father.’

The third woman in his past is Hannah Maynard, who lives near him in Chislehurst.

It has been reported that she and Reed had ‘issues’ which again led to some legal exchanges. A source said: ‘She got solicitors involved when it all went wrong — it was over texts and she wanted to stop Reed contacting her.’

Certainly, it seems that there are some money issues in play for him.

He is the director of one company, Zero Zero Five, which is in voluntary liquidation, and has seven former company directorships. One of these, Fab 10, was incorporated in October 2012 and put into voluntary liquidation in November 2016. Its statement of affairs reported an estimated deficit of £41,722 — including £4,837 due to HMRC and £24,500 to Reed.

All of these companies are dormant apart from Sail Shade which traded as Fabric Ten — a roof firm — and went into voluntary liquidation in October 2011. At that time it owed £31,770, including £7,343 to HMRC.

There are some signs that Zoe’s romance with Reed has had its bumps — they reportedly split in November last year amid claims she was ‘growing uncomfortable’ with his taste for fame and the high life.

‘Zoe knew deep down the relationship wasn’t going anywhere,’ a friend told The Sun at the time. ‘She enjoyed her time with Michael but came to the conclusion he wasn’t a keeper, despite him believing they were getting serious.

‘There were certain things she grew uncomfortable with, such as him wanting to become a model and act. Her close circle feared he was using her to enhance his own career.’

Another suggested: ‘With all Zoe’s had going on with Billy, work and Norman, she’s had so much to deal with and, sadly, a new relationship was too much.

‘It wasn’t possible. They remain friends but she’s happily single and focusing on her kids and work.’

However, by March this year they were together again, shopping at a garden centre, and the following month they were said to be living under the same roof.

His former loves may have their doubts about him but it seems for the moment, at least, that the BBC’s golden girl thinks he is bang on the money.