Soldier, 26, is busted ‘entertaining’ a 53-year-old woman who snuck into his quarantine hotel room – before both are fined $1,000 and she’s booted out

A young Australian Defence Force officer snuck a 53-year-old woman double his age into his quarantine hotel room before both were caught and fined $1,000.

Daily Mail Australia understands the woman, who wasn’t in quarantine, was staying on level one of the Pier One hotel at Walsh Bay, on Sydney Harbour, when she saw the 26-year-old RAAF man through his window after midnight.

The Royal Australian Air Force officer, who had returned from overseas deployment, was having a beer in his room on the third level when he held up paper signs, one with his mobile phone number and another telling her he was in mandatory 14-day isolation.

The businesswoman and mother had been drinking at Bar One, connected to the Pier One hotel, and later did a late-night flirtatious dance outside to get the man’s attention.

After he flashed up his phone number, she called him before sneaking into his room in the luxury hotel next to the Sydney Harbour Bridge. 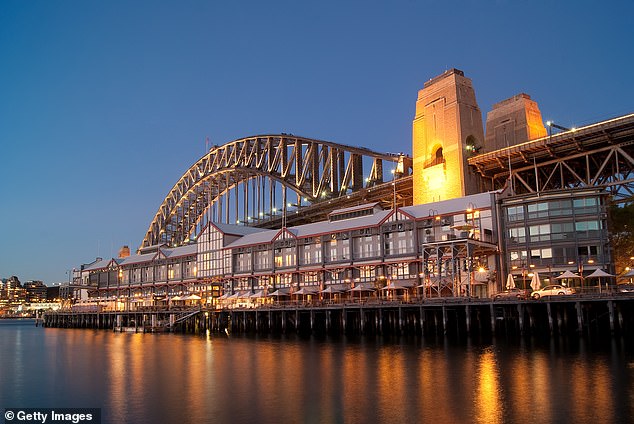 Daily Mail Australia understands the woman, who wasn’t in quarantine, was staying on level one of the Pier One Hotel (pictured) in Sydney’s Walsh Bay when she saw the 26-year-old through his window

Australian Defence Force officers who were in charge of security at the hotel had failed to initially see the woman – a 53-year-old divorcee and Liberal Party member who lives on Sydney’s upper north shore – when she went to level three to enter the officer’s room.

The ADF guards, however, became suspicious when they heard a female voice coming from the officer’s room.

The woman was caught by ADF officers leaving at 12.45am on Tuesday, before police were called.

New South Wales Police said in a statement that the solider and the woman were fined after he ‘entertained’ the hotel guest.

Daily Mail Australia understands the strangers with a 27-year age gap had been kissing.

‘The woman was directed to check-out immediately and attend a COVID testing facility before self-isolating at her Hornsby home,’ police said.

‘The man remains in hotel quarantine and the ADF are conducting further investigations.’

NSW recorded seven new COVID-19 cases in the 24 hours to 8pm on Monday.

This includes four in hotel quarantine – with three overseas travellers and one returned traveller from Victoria – and two linked to a known cluster while another is still under investigation. 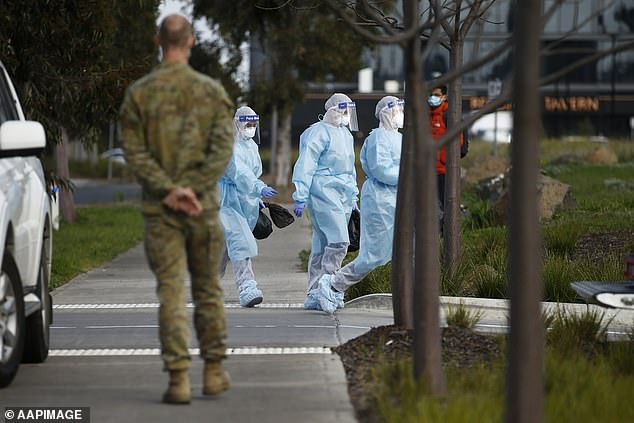 The woman was caught by ADF officers leaving at 12.45am on Tuesday morning, before police were called. Pictured are Australian Defence Force personnel in Melbourne, to illustrate how they are also being used to guard aged care facilities

All passengers who were on the same flight as the infected NSW resident returning from Victoria in Sydney are in hotel quarantine.

Two of the new cases are linked to the Concord Hospital and Liverpool Hospital cluster.

Chief Health Officer Kerry Chant says authorities are concerned about a drop in testing rates – with 8835 tests conducted in the latest 24-hour reporting period, down from 9316 the previous day.

She wants daily testing back above 20,000 ahead of the school holidays which start on September 26.