A chef has hit back at a TripAdvisor reviewer who slammed his restaurant as a ‘total rip off’, before announcing his retirement from the customer review website.

Gary Usher, 36, from the Sticky Walnut in Chester, Cheshire, responded to the complaining customer, who warned others to avoid the restaurant ‘like the plague’ after they were charged £122 for a steak and chips dinner for two.

He urged the customer to ‘be kind’ to his ‘humble neighbourhood bistro’ .

The chef then posted his response on Twitter, signing off by announcing he was quitting TripAdvisor after an ‘unhealthy 10 year working relationship’.

The online war-of-words began after a review from the account of Ema Linaker, rated Gary’s restaurant one star on TripAdvisor. 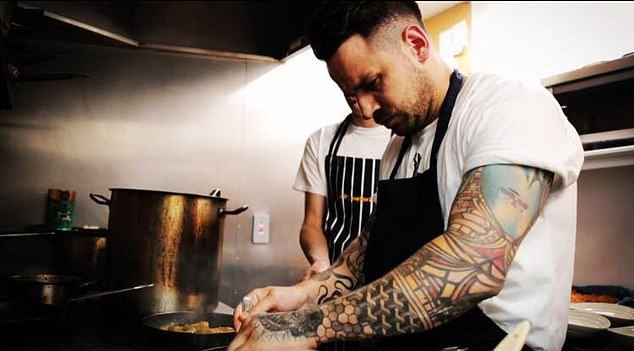 Gary Usher, 36, from the Sticky Walnut in Chester, Cheshire, responded to the complaining customer after they left a one star review on TripAdviser 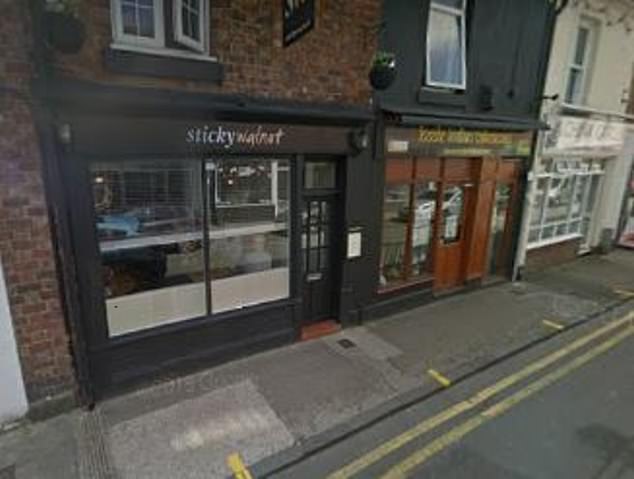 Gary, who once appeared on a Channel 4 documentary, urged the customer to ‘be kind’ to his ‘humble neighbourhood bistro’  (pictured)

The review, which included a picture of a £122.50 receipt from last Friday, said: ‘Total rip off! I would never eat here again.

‘If you want to pay 45 pounds each for an average piece of sirloin steak and some Parmesan chips then this is the place to go!’

‘A really misleading menu along with eye-wateringly expensive steak which is not worth it’.

The review also accused their waitress of being ‘extremely agitated, defensive and frankly rude’, before urging people to, ‘avoid this place like the plague unless they like being ripped off’.

Gary, who previously appeared in a Channel 4 documentary about one of his restaurants, responded to the customer claiming it was her who was rude not his staff.

He added that the menu has a fixed price of £39 for three courses and that the supplement of dry aged sirloin steak costs an extra £15.

Gary responded: ‘I only personally respond on here every few years so well done on getting me out of Twit-advisor hibernation.

‘Your last Twit-advisor review was for The Dorchester “to celebrate Mummy’s birthday”. 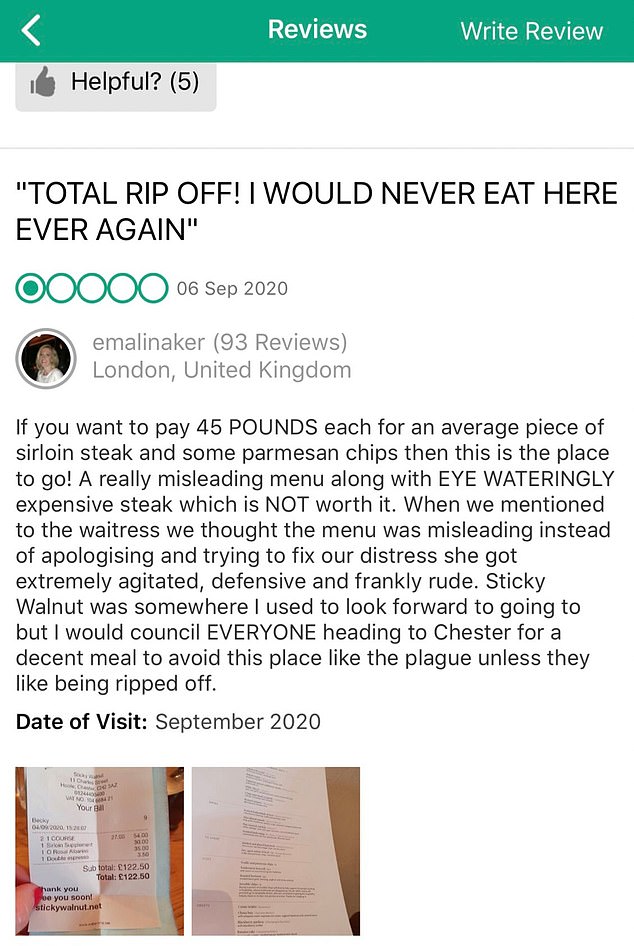 The one star review was left by Ema Linaker, who warned others to avoid the restaurant ‘like the plague’ after they were charged £122 for a three-course dinner for two 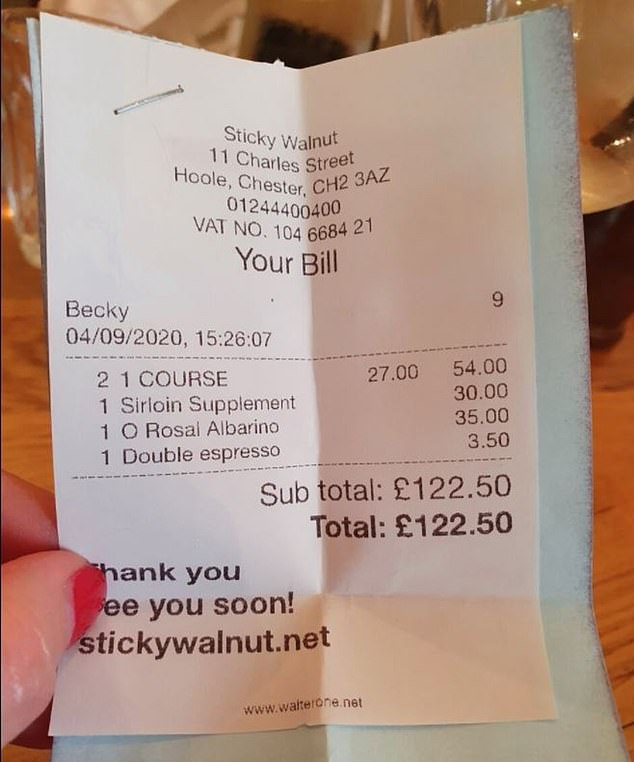 She included a picture of the receipt from the Sticky Walnut (pictured), which showed the cost of the meal 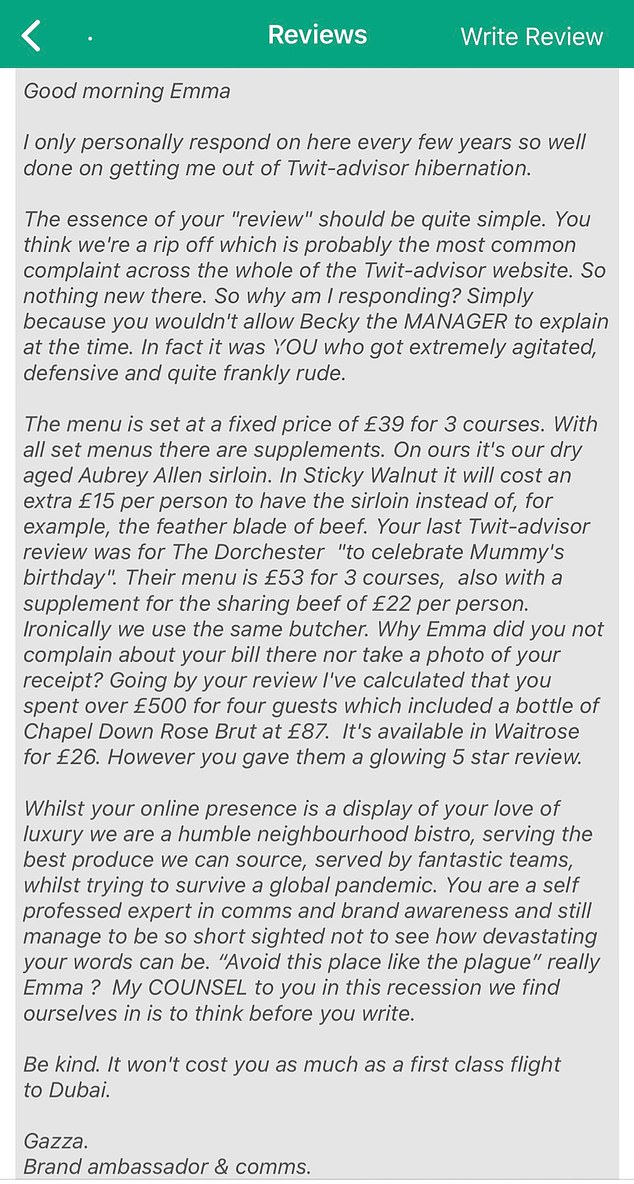 Gary responded to the Tripadvisor post where he told the reviewer to ‘be kind’, adding ‘it won’t cost you as much as a first class flight to Dubai.’

‘Their menu is £53 for 3 courses, also with a supplement for the sharing beef of £22 per person.

‘Ironically, we use the same butcher. Why Emma did you not complain about your bill there nor take a photo of your receipt?

‘You are a self-professed expert in comms and brand awareness and still manage to be so short sighted not to see how devastating your words can be.’

Gary further advised the reviewer to ‘Think before you write’ after her scathing review.

‘Be kind, it won’t cost you as much as a first-class flight to Dubai. Gazza. Brand ambassador & comms’.

Gary captioned the image on Twitter: ‘My response is no longer pending. The TripAdvisor site has published it and Emma the reviewer will now have it too.

‘Was great to get all your feedback on it yesterday.

‘I’d like to announce my retirement from TripAdvisor after an unhealthy 10 year working relationship, farewell’.

A further image posted to Twitter shows Gary deleting the application from his phone.

Gary’s tweet has been liked 8,800 times and earned him strong support from social media users. 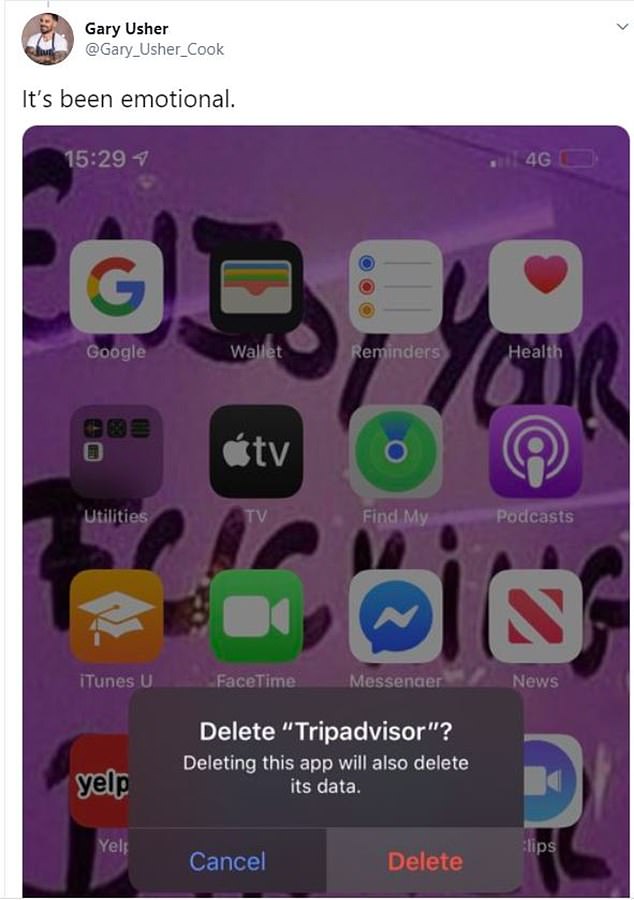 Gary posted his response on Twitter and vowed to quit Tripadvisor, before sharing a screenshot of him deleting the app from his phone (pictured)

One user wrote: ‘People just don’t realise how difficult it is trading at the moment.

‘Maybe they’ll like it better when we are all closed down again and they can go back to ‘just eat’.

Laura Barclay wrote: ‘Amazing,’ while another added: ‘Making a mental note to visit your place if I’m in Chester. Good luck to you and your team’.

Gary made headlines in 2018 after a customer complained about the Sticky Walnut’s lack of ‘customer skills’ after staff were asked to go shop for lemonade for a red wine spritzer.

Gary shot down the customer saying; ‘We often nip out for people’s requests. It’s part of great hospitality. We just don’t do it if you’re a rude c***’.

Gary starred in a Channel 4 documentary in 2019 called The Rebel Chef: My Restaurant Revolution.

The documentary follows the opening of one of his crowdfunded bistros Pinion in the Merseyside Town of Prescot.