Alexandria Ocasio-Cortez and her boyfriend Riley Roberts have been spotted out and about in the trendy Meatpacking district of New York City, dining at a popular pizzeria before strolling the High Line.

Her boyfriend of four years, a web designer, was coordinating with his girlfriend in a striking red jacket, with a matching red face mask, with trendy Allbirds, popular among tech execs, which retail for $95.

The two are famously low-key, with few even knowing she was in a relationship when she was elected in 2018. 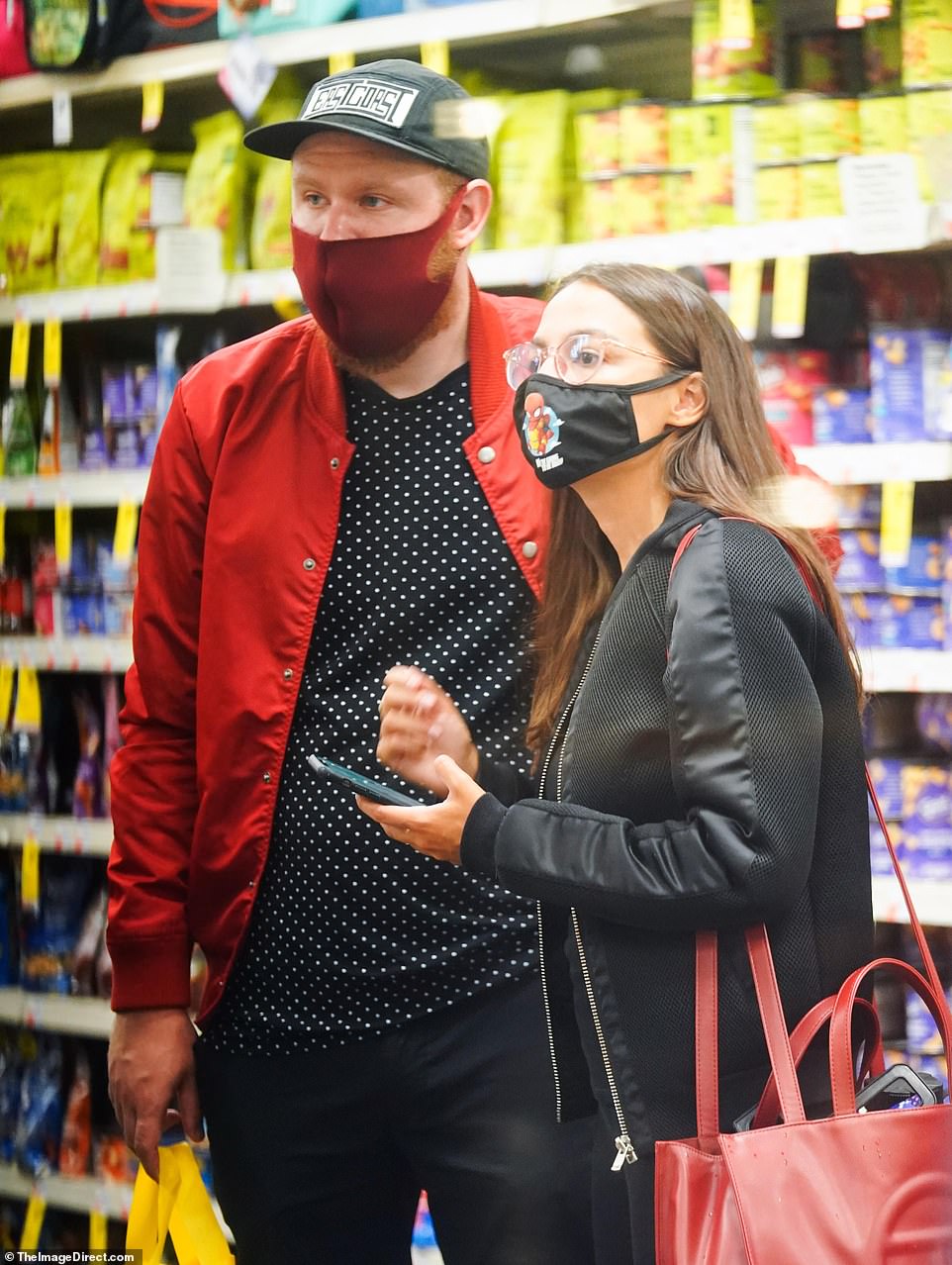 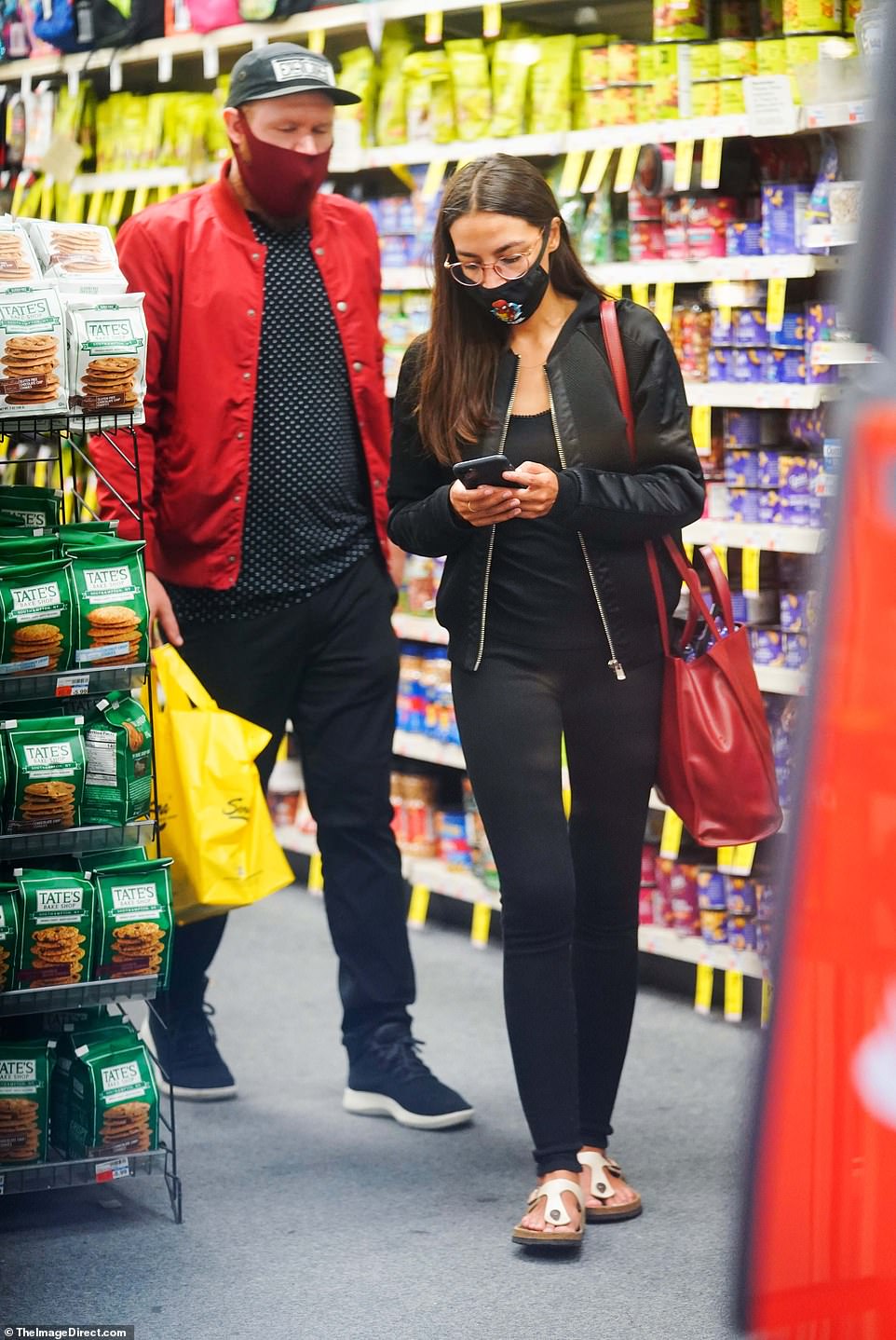 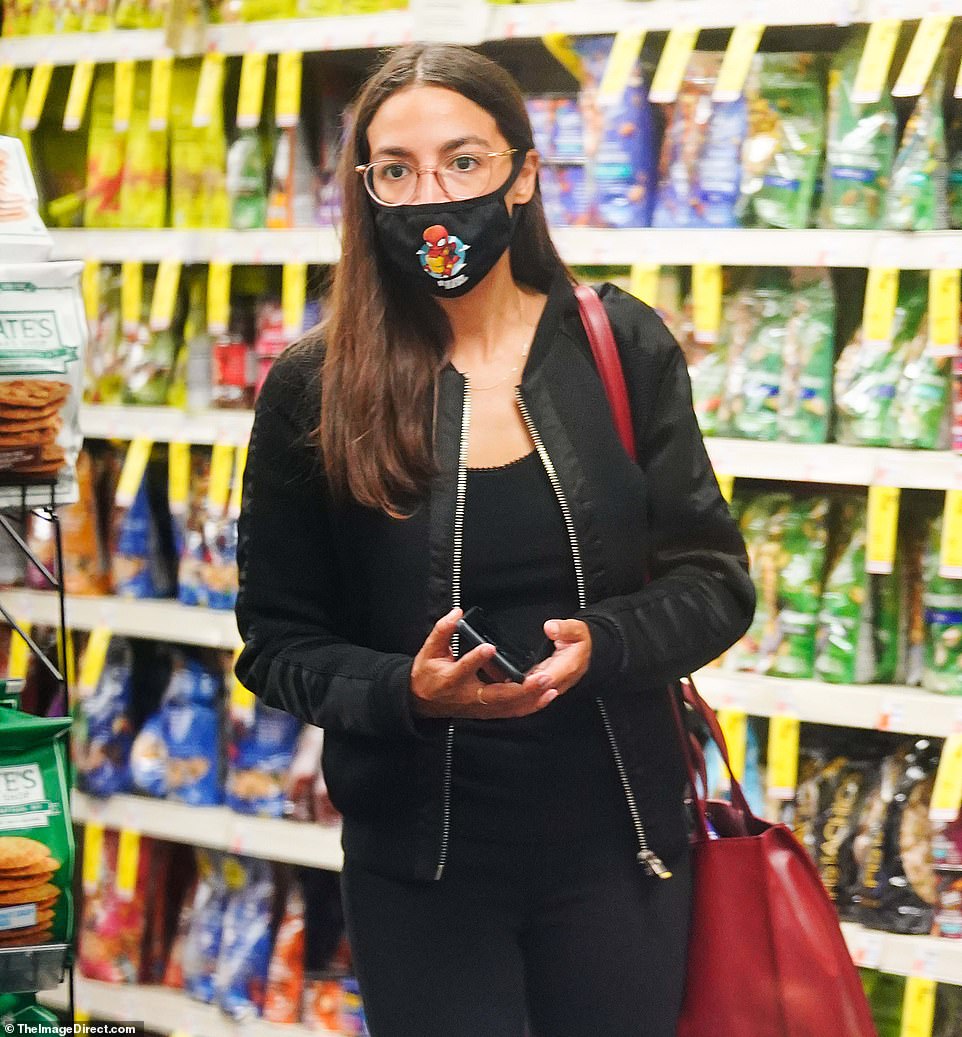 AOC, as she is known, wore a sleek $450 Maje black bomber jacket for the outing 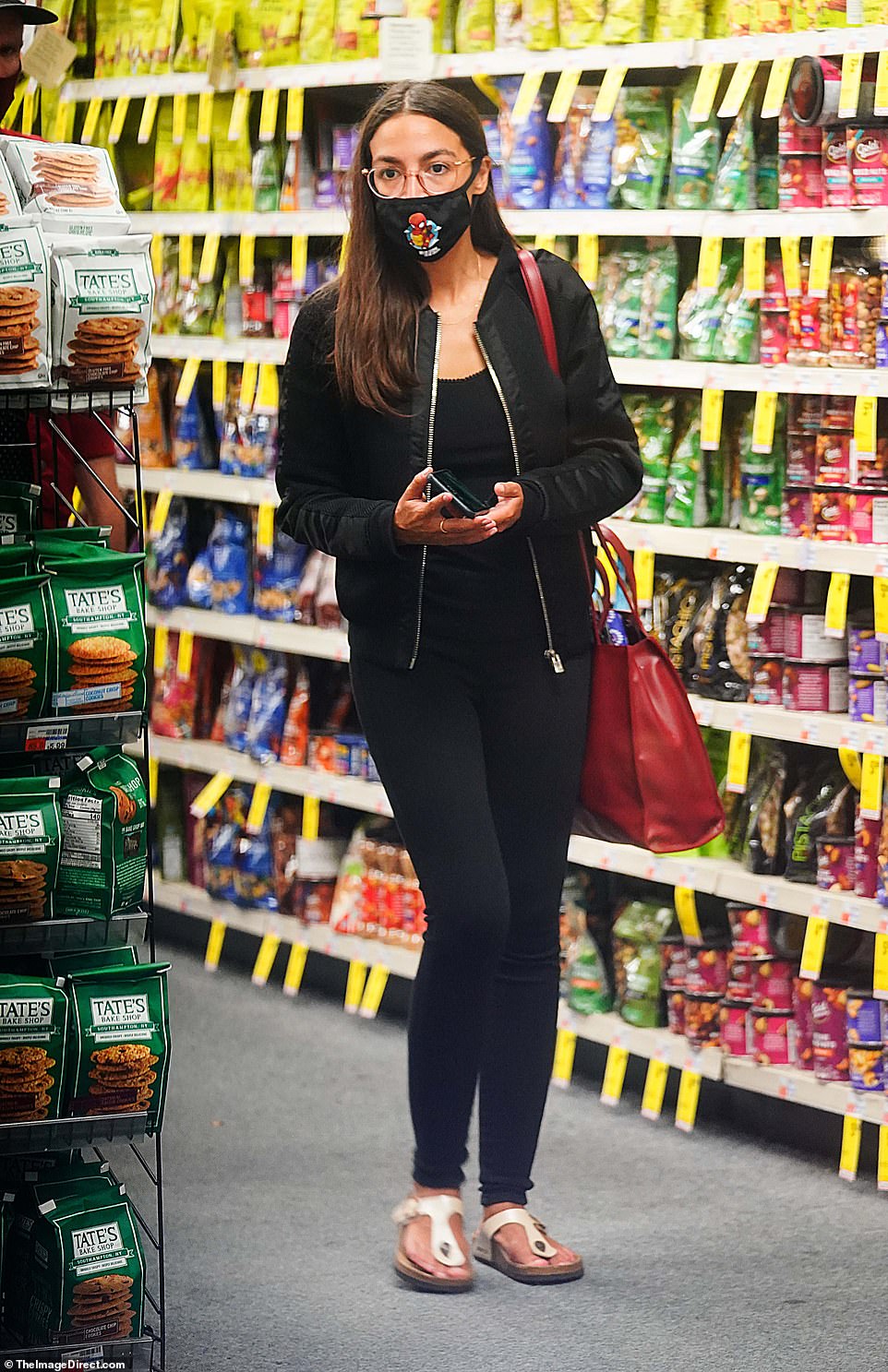 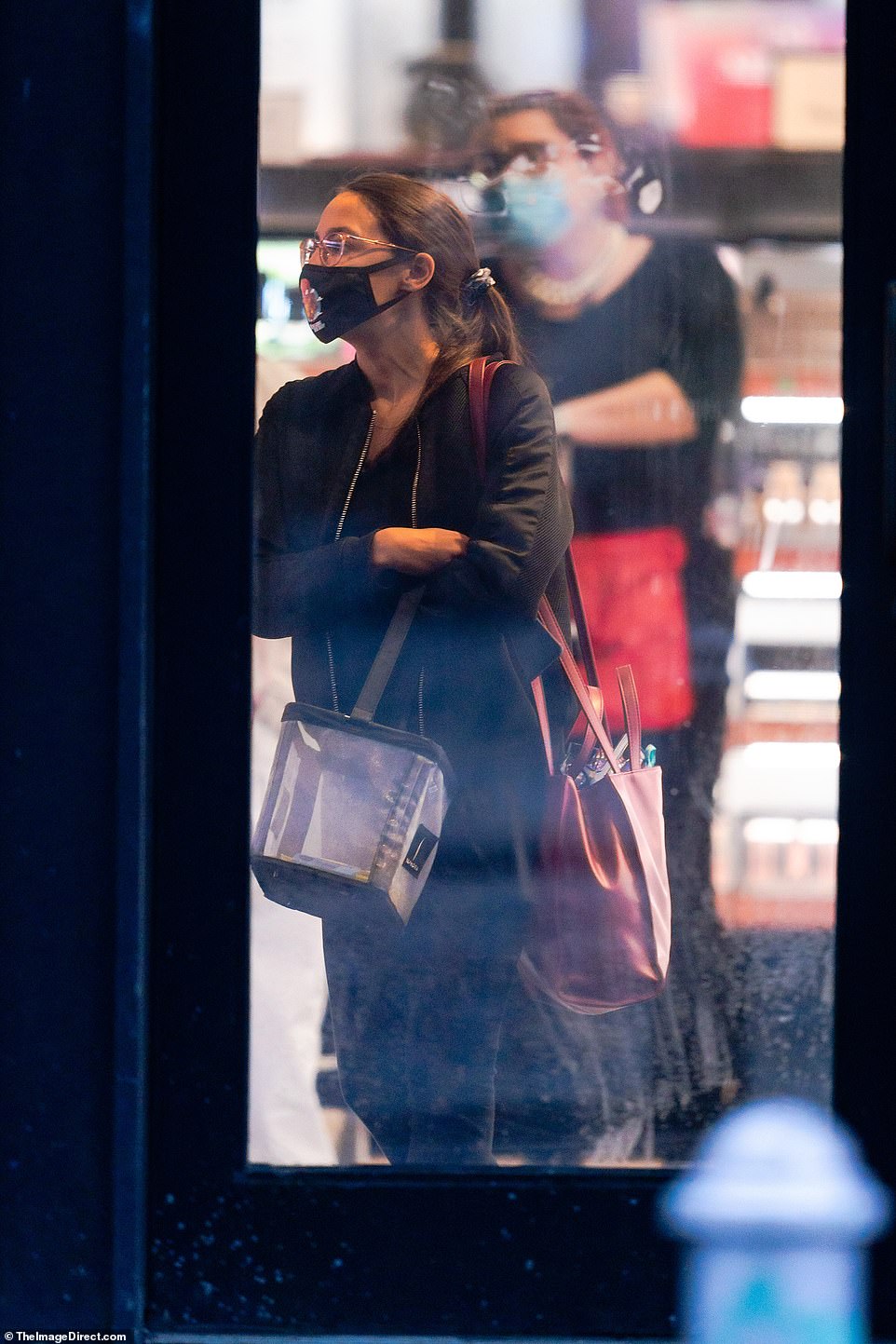 The pair then went to Sephora, with AOC – famed for her red lipstick – picking up some essentials 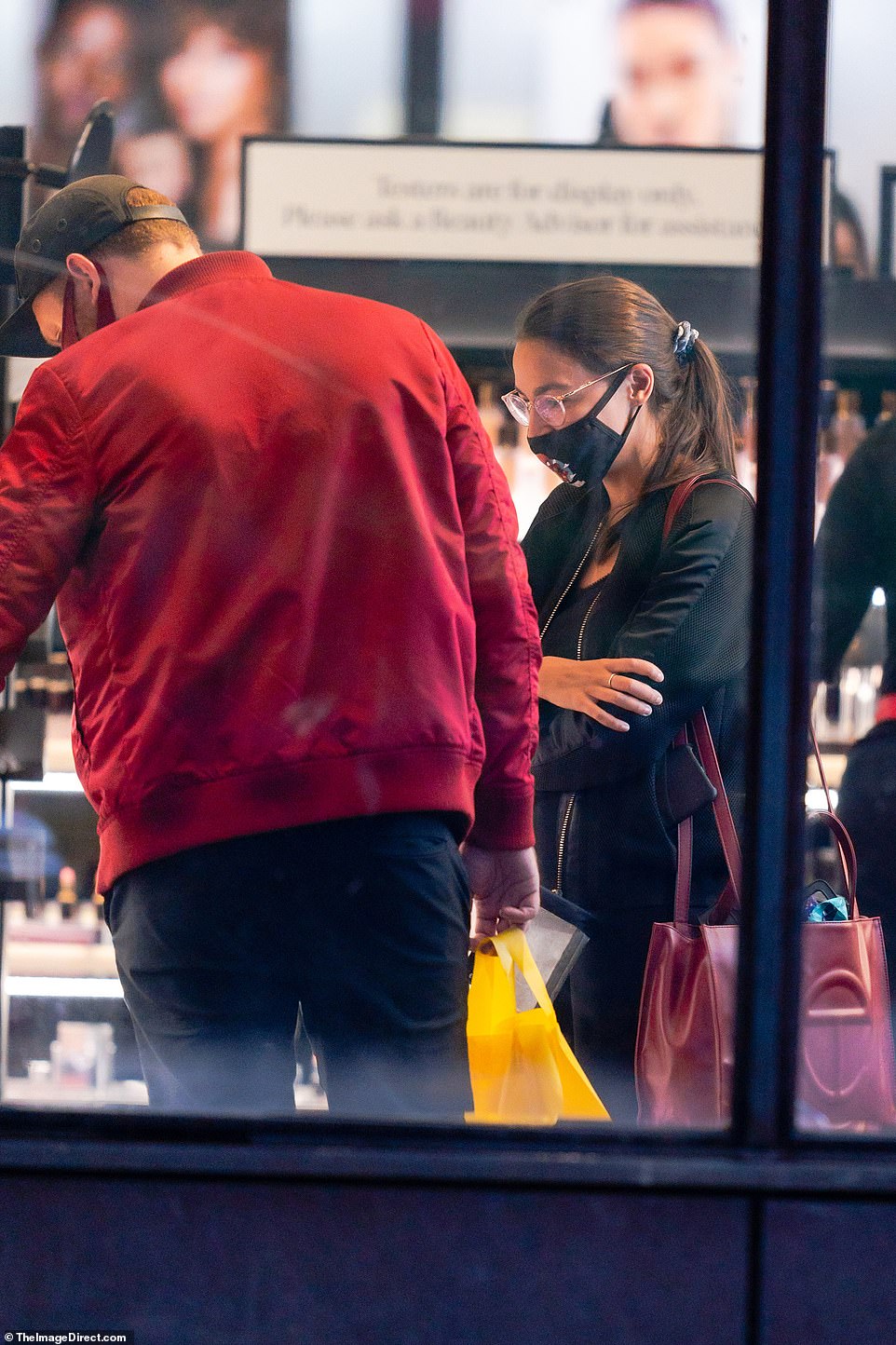 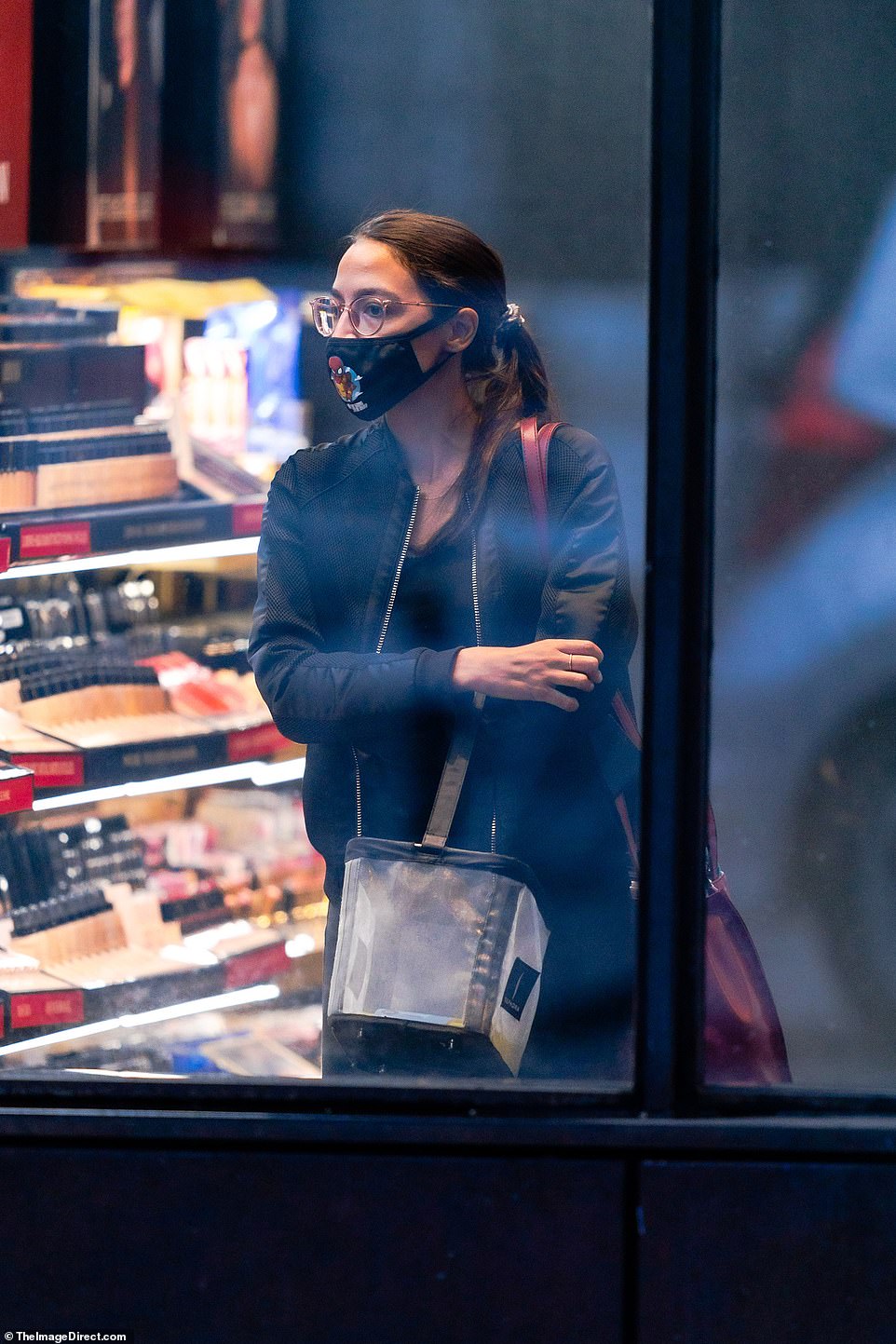 AOC browsed the cosmetics store in the Meatpacking District

Roberts, originally from Arizona, was present at her swearing-in ceremony in January 2019, and has made occasional, infrequent appearances on her social media.

They live in the Bronx with their French Bulldog, Deco.

Roberts is head of marketing at HomeBinder.com, which helps people manage the maintenance on their homes.

He also works as a consultant to help tech startups grow revenue using marketing and development.

On Thursday the duo made the most of a committee work day – a day when there were no votes scheduled in the House – to make the most of their hometown.

They were spotted running errands in CVS and makeup store Sephora before sitting outdoors at Italian eatery Serafina – famed for its pizzas, and popular with tourists and celebrities alike.

Pizzas at the see-and-be-seen restaurant range from $16 for a simple margarita, to $29 for a black truffle pizza.

The pair then strolled along the High Line – one of New York’s most popular tourist sites. 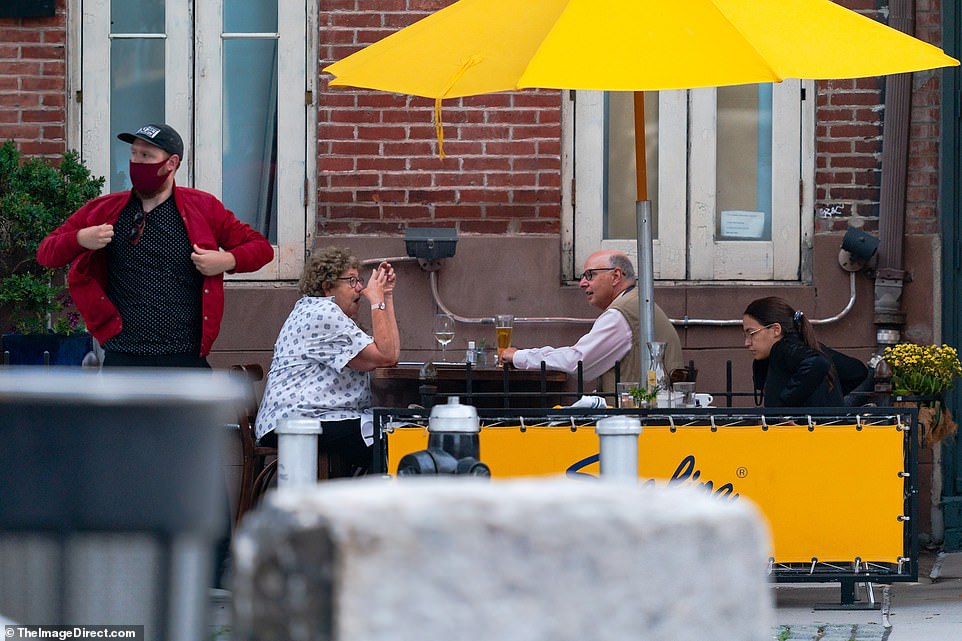 Ocasio-Cortez and Roberts then headed to popular Italian restaurant Serafina, which has branches across the city 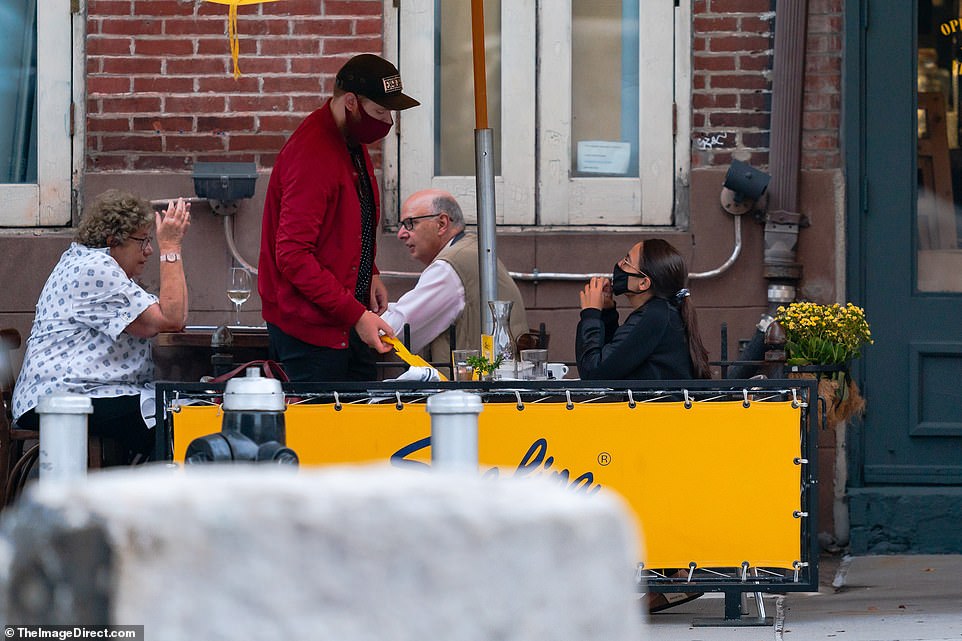 AOC and Roberts sat outside, with other diners oblivious to their presence 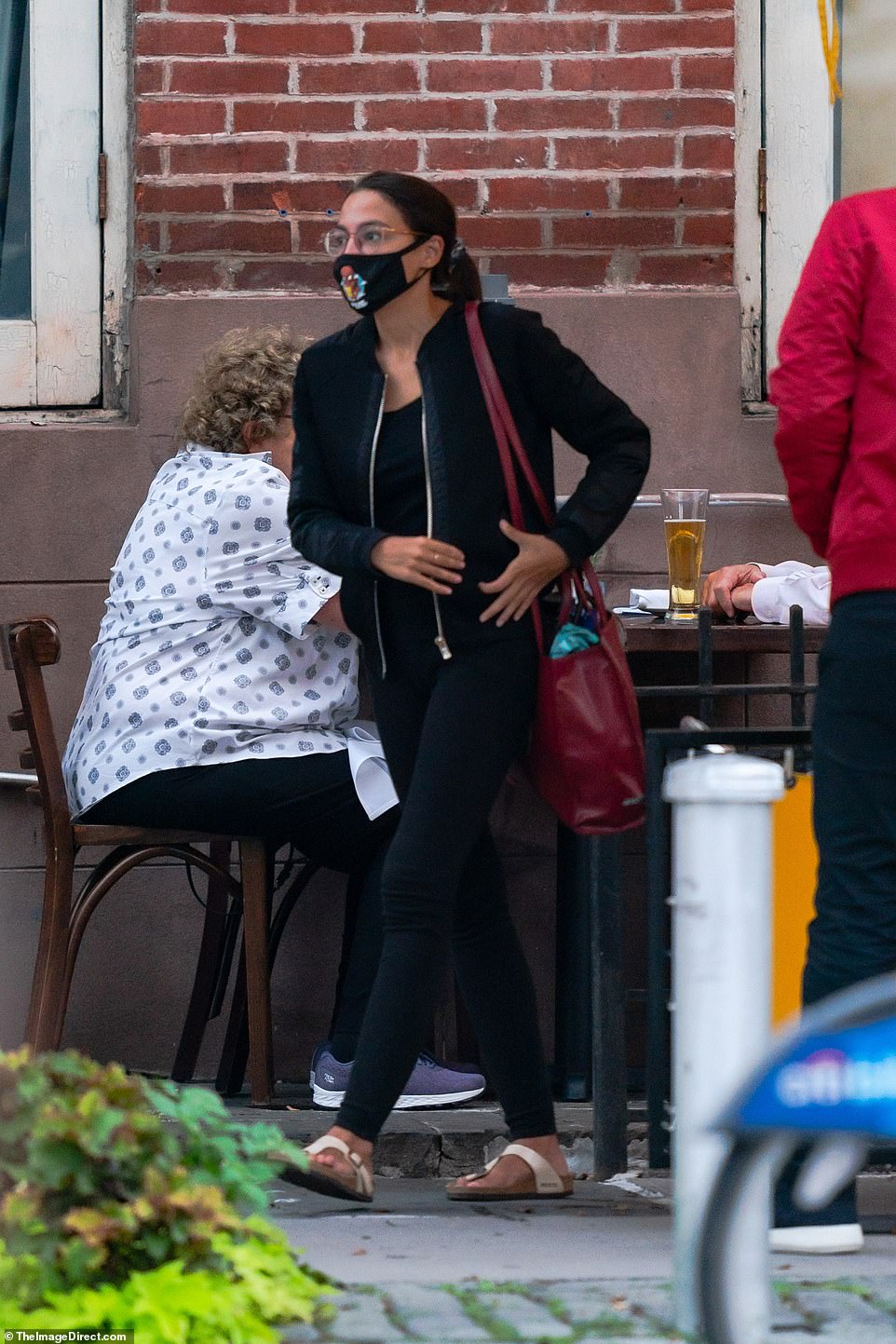 The Congresswoman was elegant in her white $113 Birkenstocks 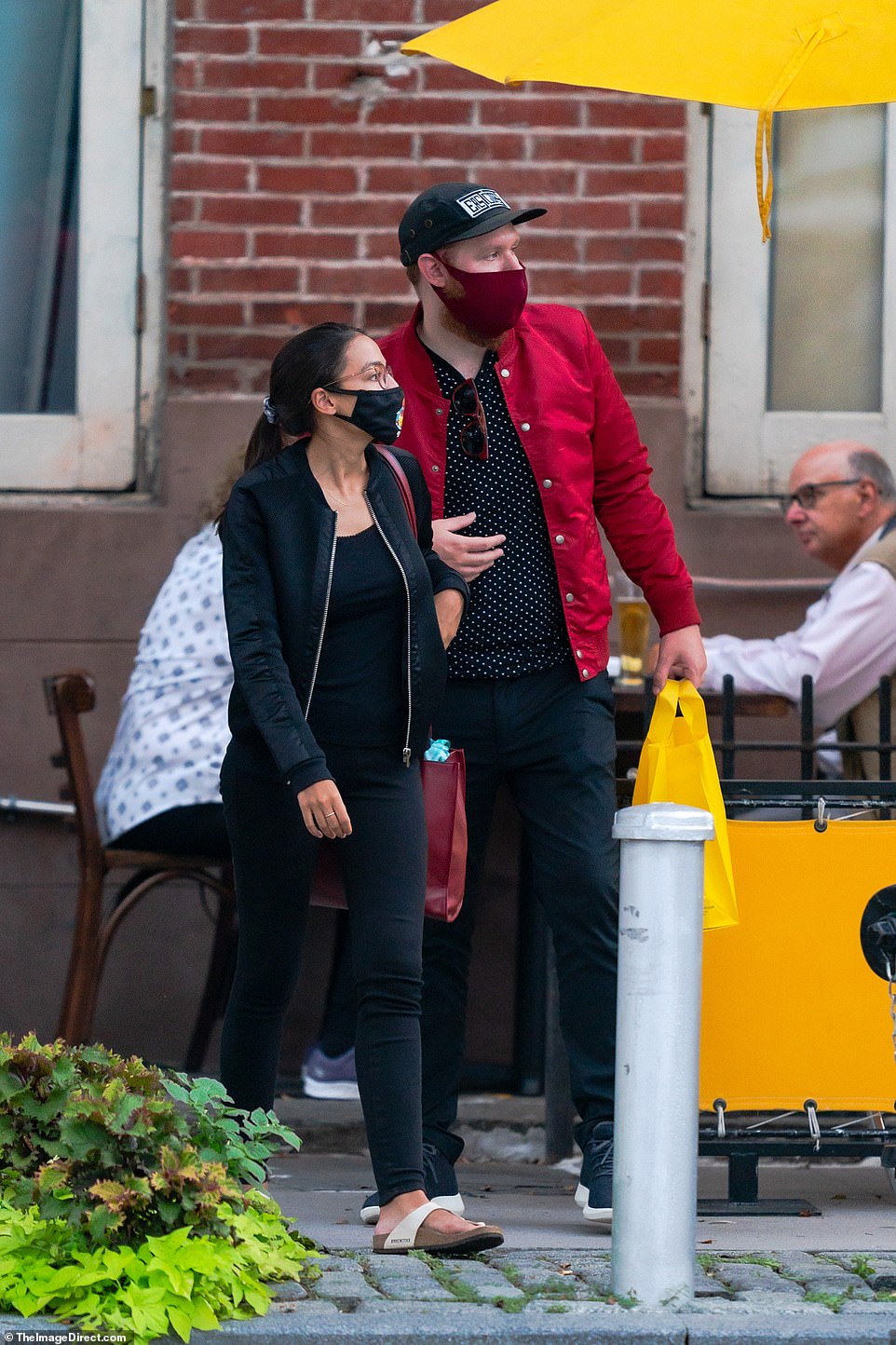 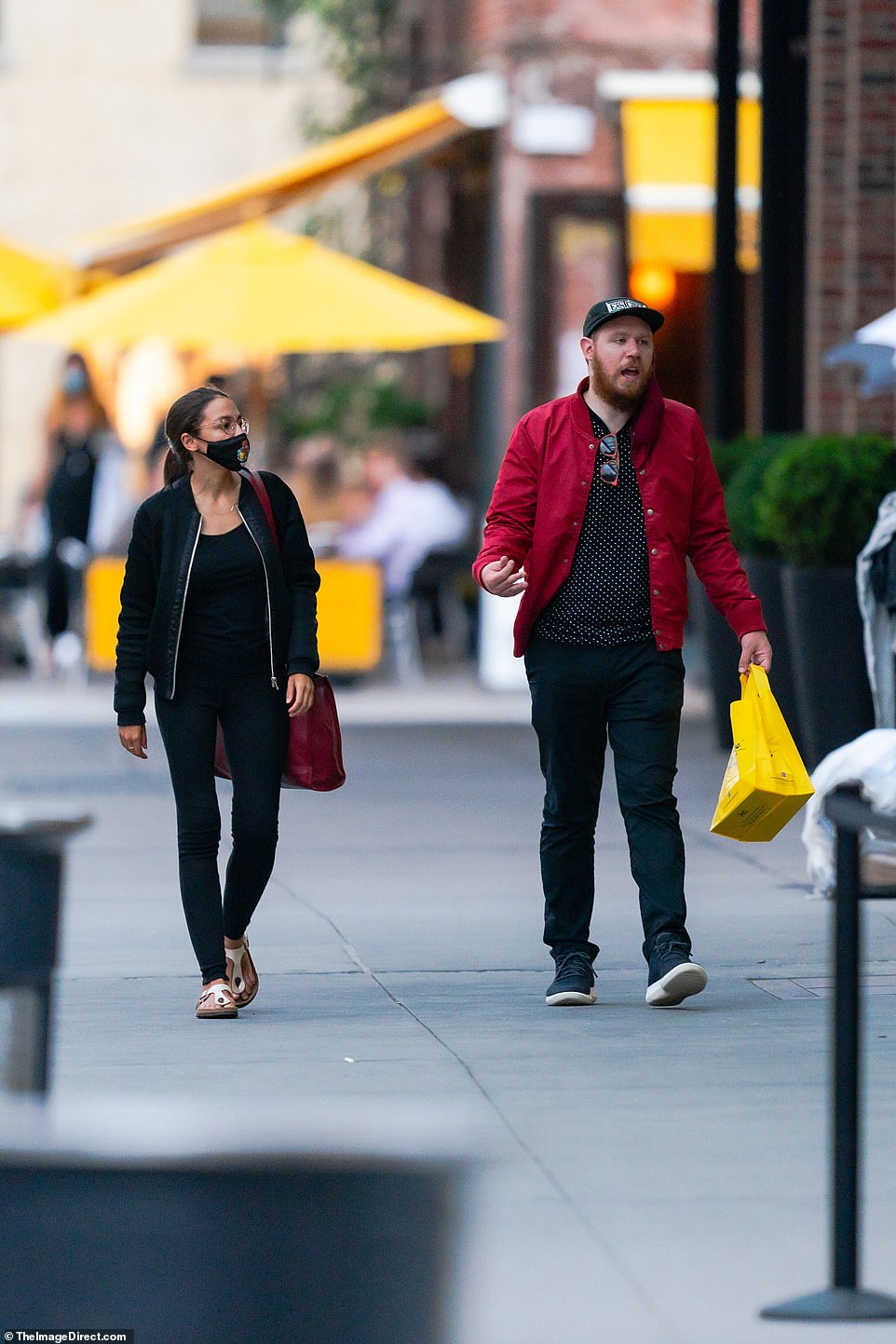 After their lunch, the duo strolled through the Meatpacking district in lower Manhattan 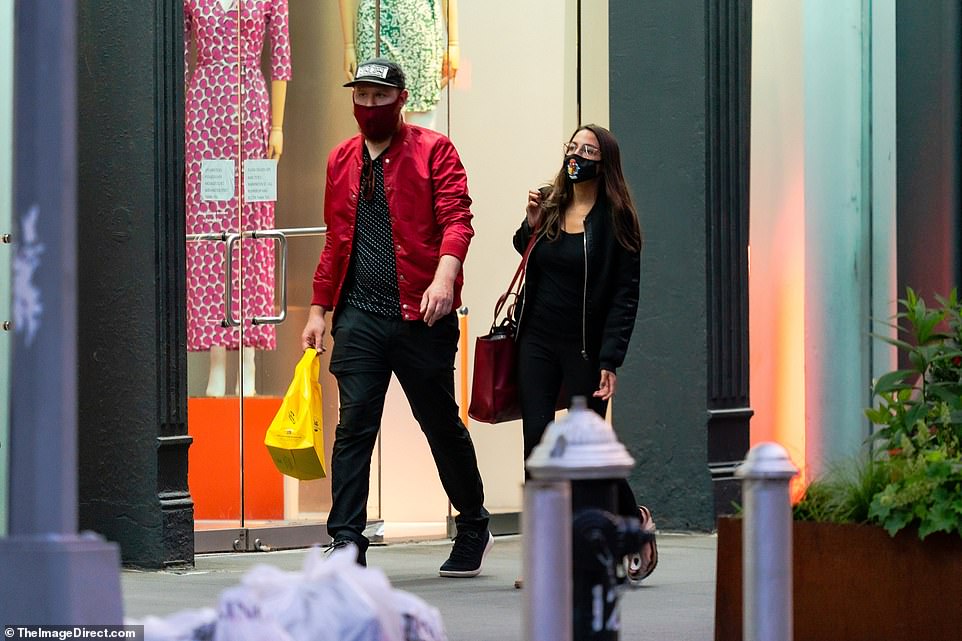 The Meatpacking was popularized by Sex And The City, when the character Samantha moved in 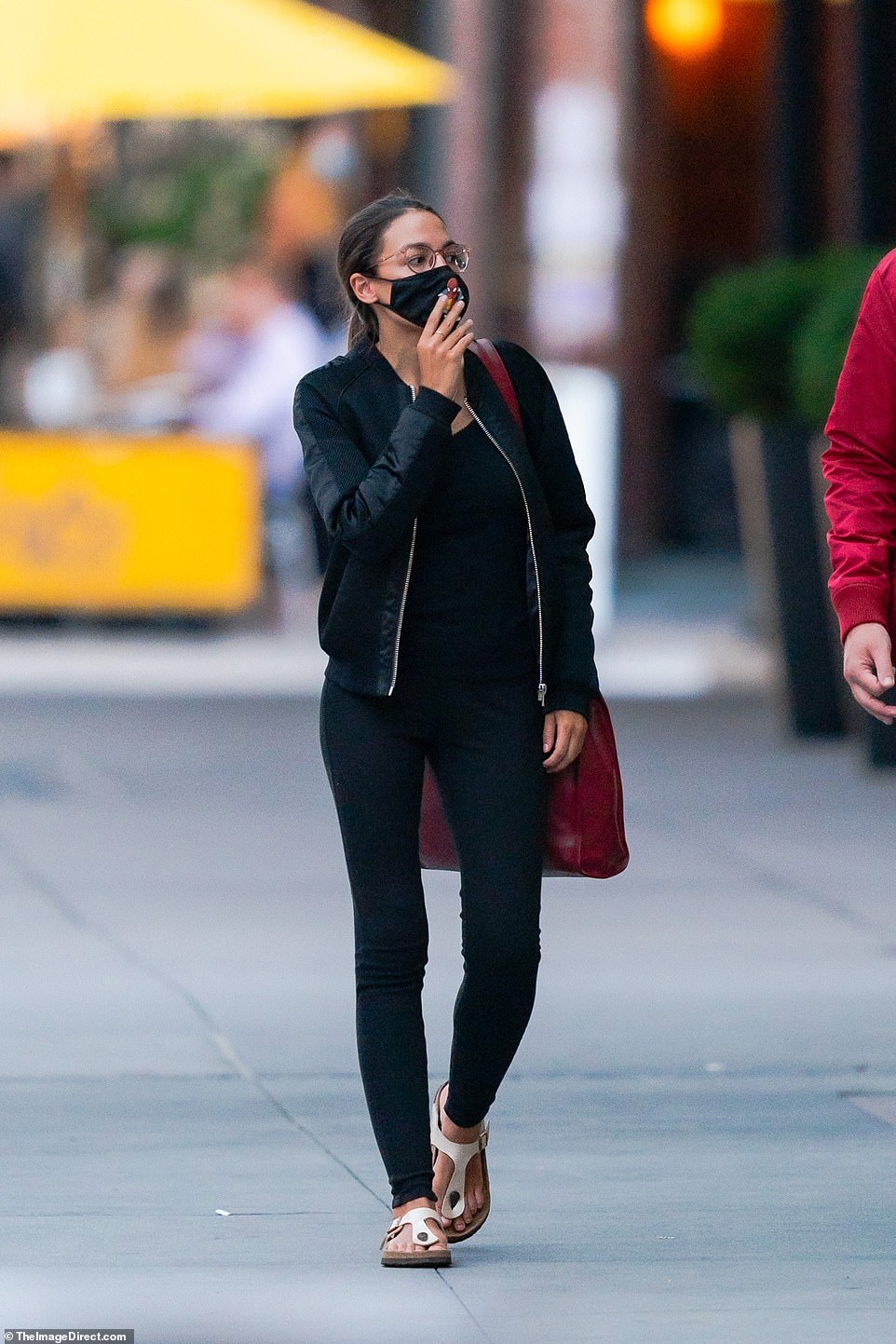 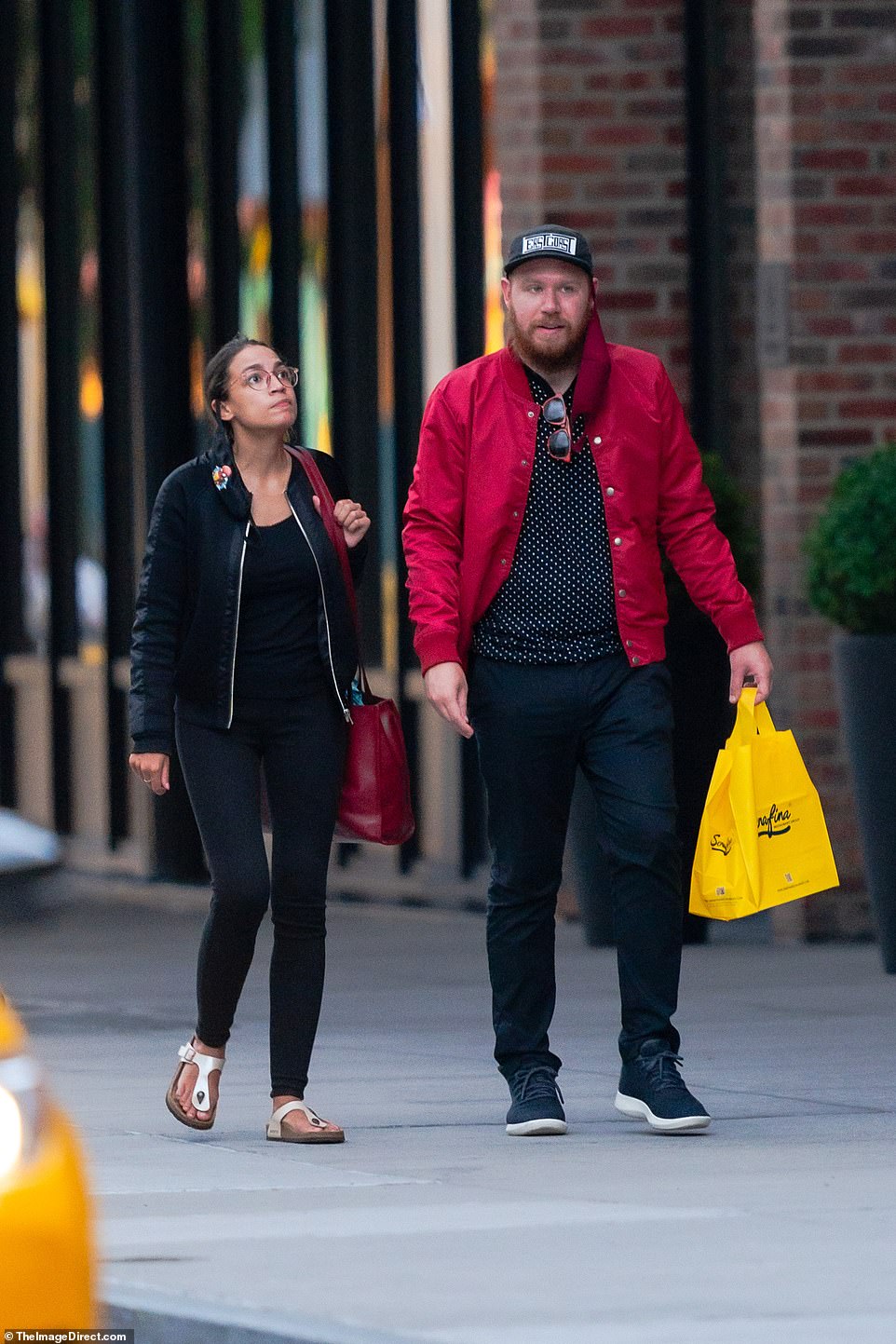 The pair have been together for four years, but try to keep their relationship low-profile 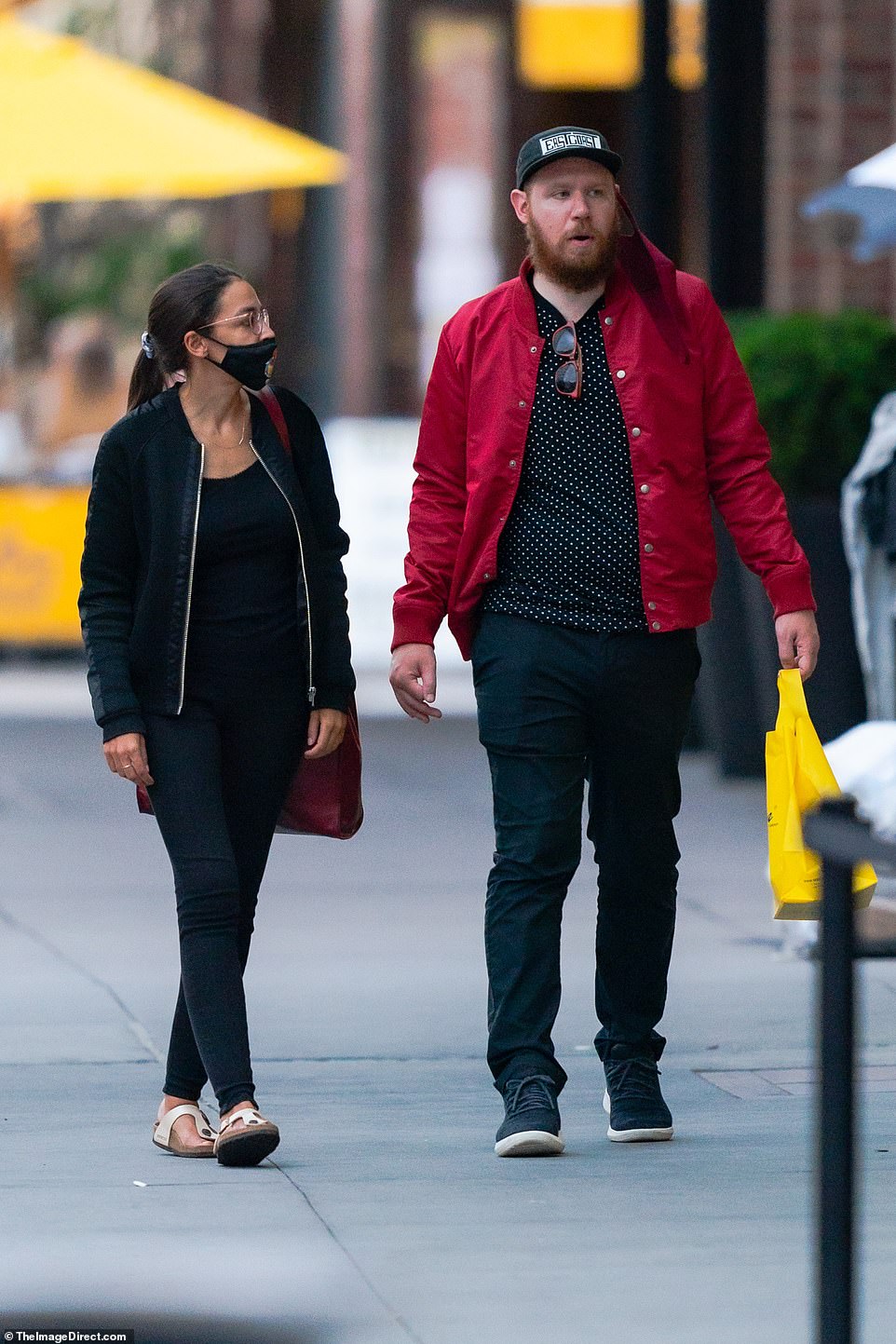 AOC and Roberts walked from the restaurant to the High Line, a few blocks away 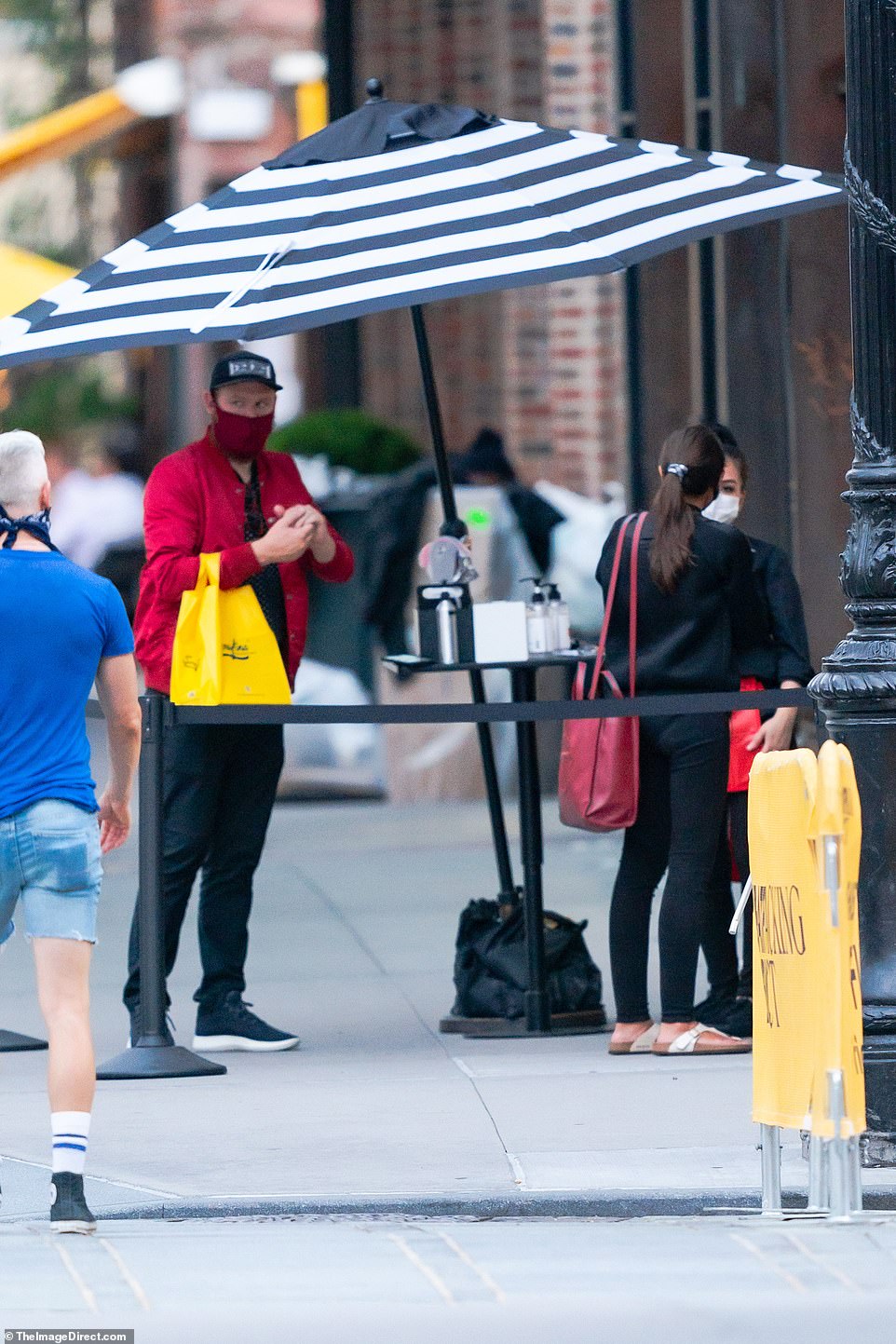 Roberts, who like AOC was wearing a facemask for the majority of the time, took advantage of the hand sanitizer

The landscaped walkway, filled with sculptures and flanked by murals, is currently open from noon until 8pm, with a free timed-entry reservation system.

The site is operating on a reduced operating schedule, with fewer amenities, and limited capacity in order to allow for social distancing. 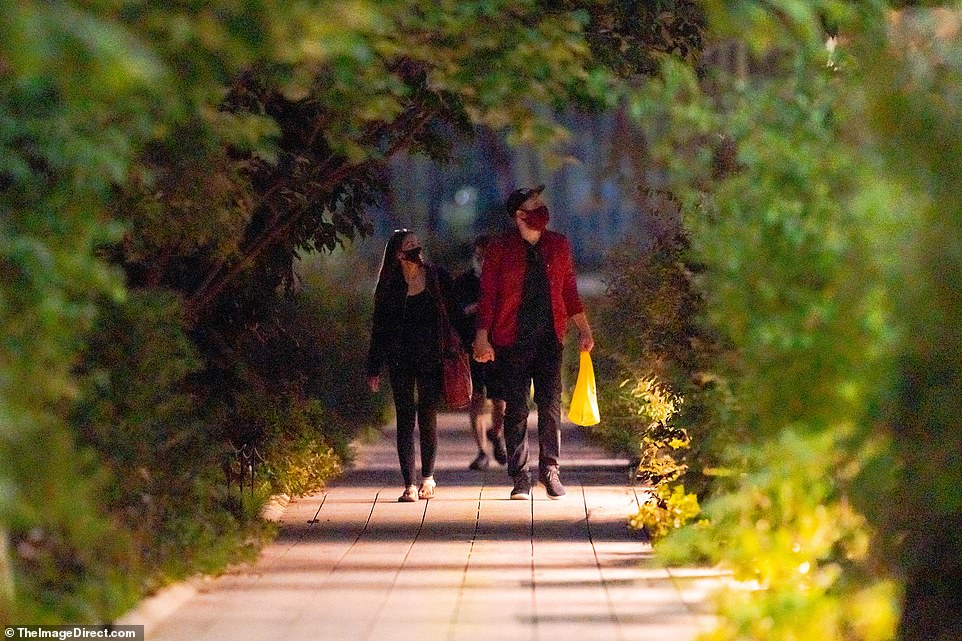 AOC and Roberts then stepped up onto the High Line 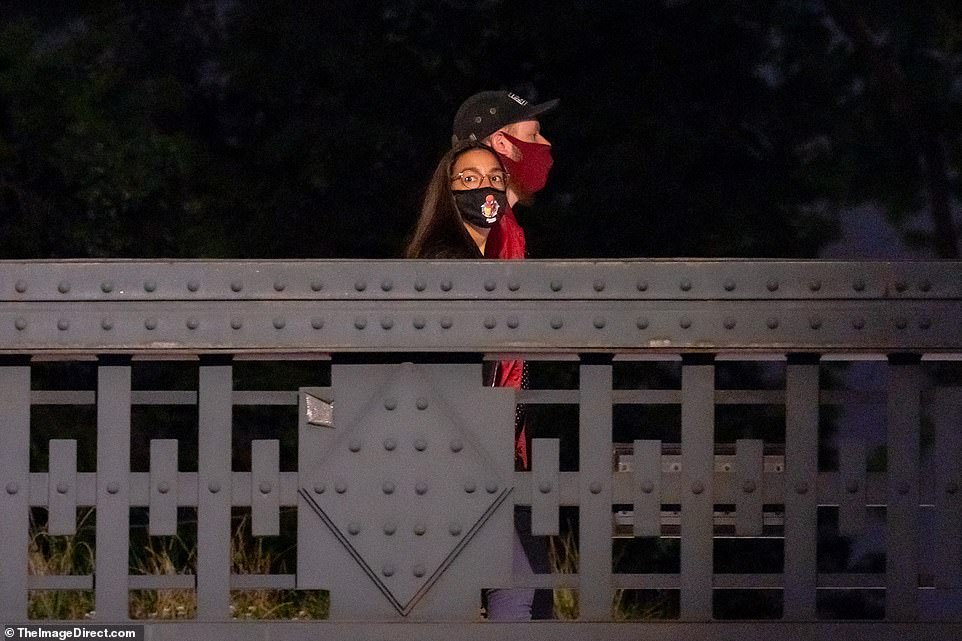 The High Line was closed during the pandemic, but has recently reopened 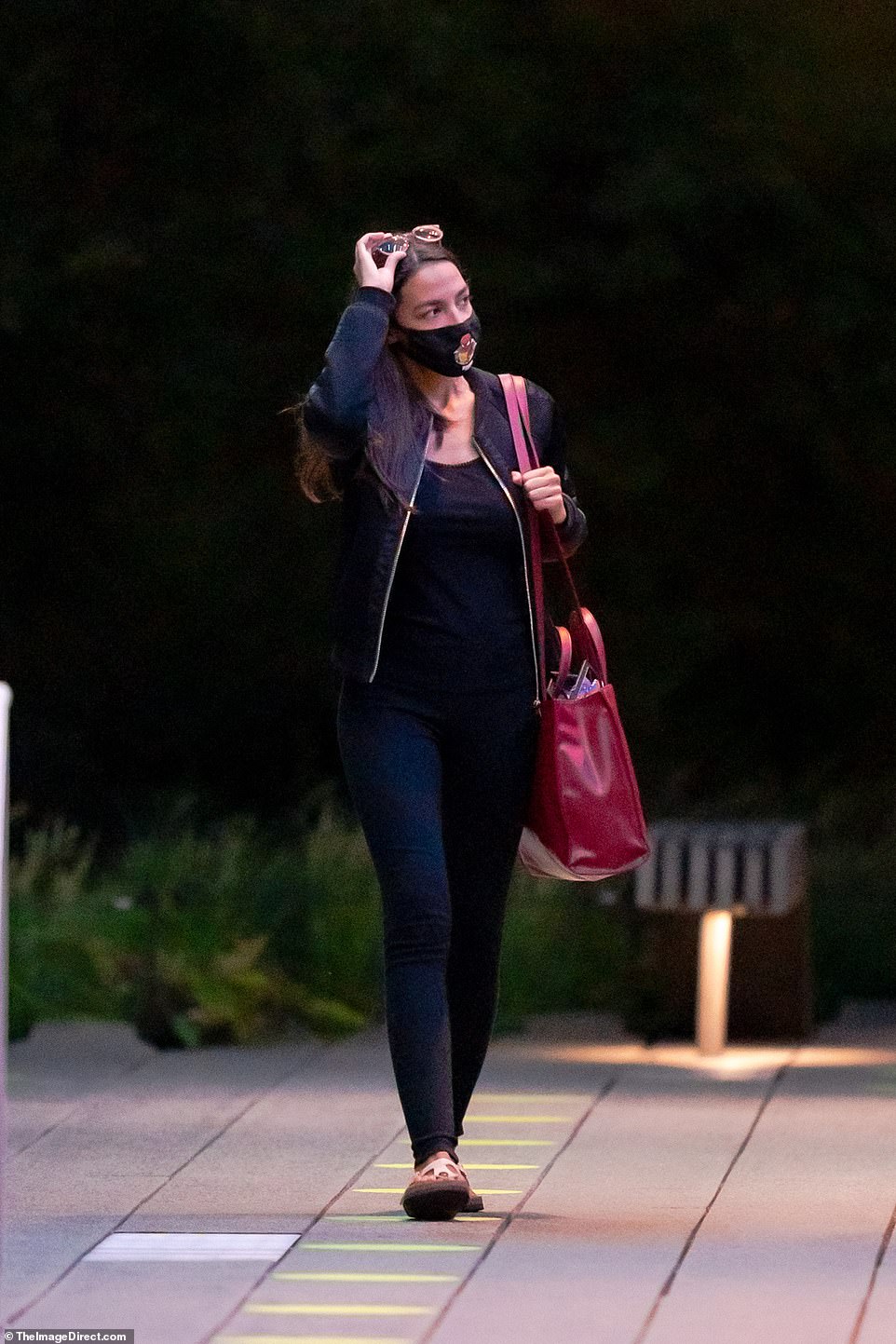 The Congresswoman kept her face mask on on the High Line 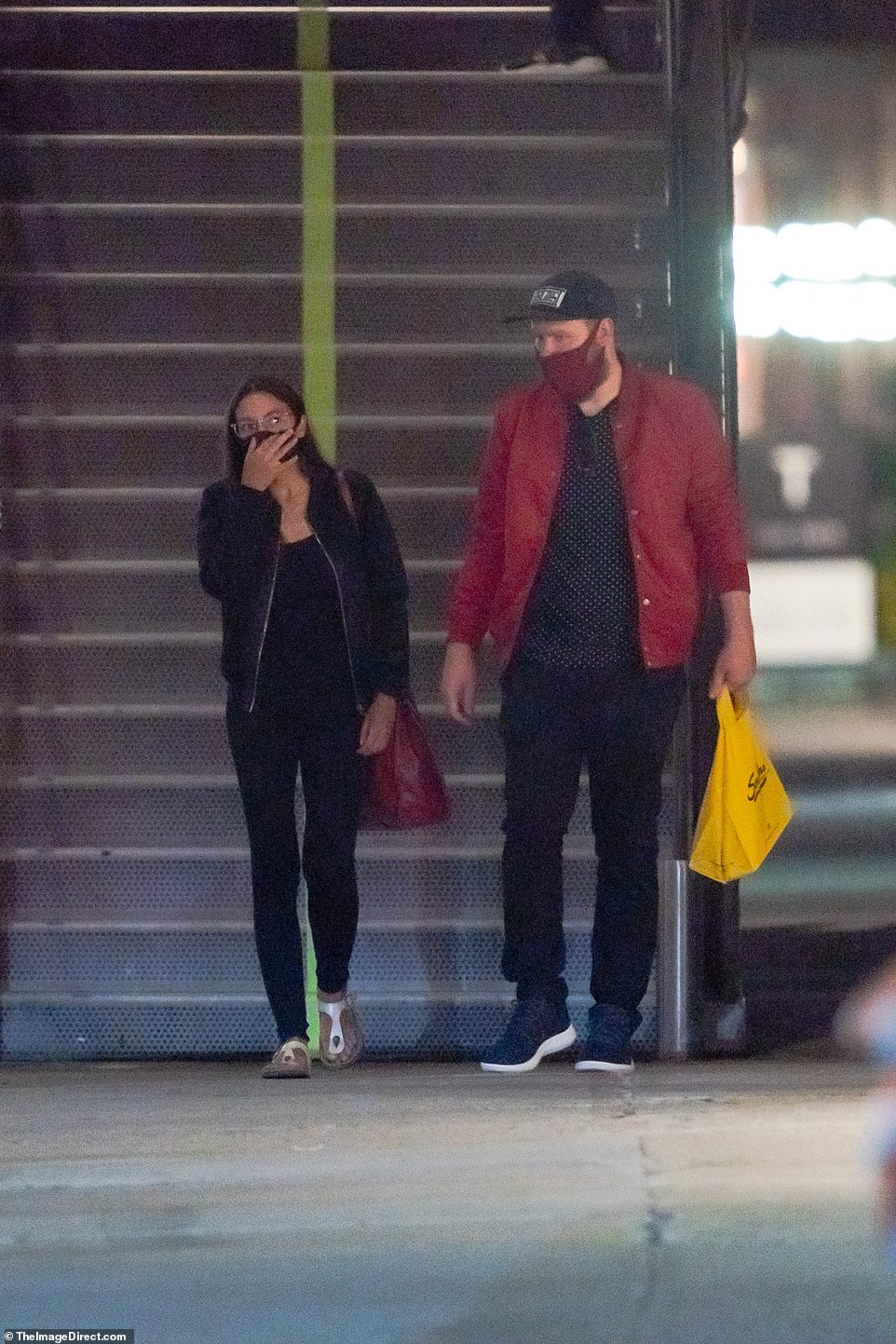 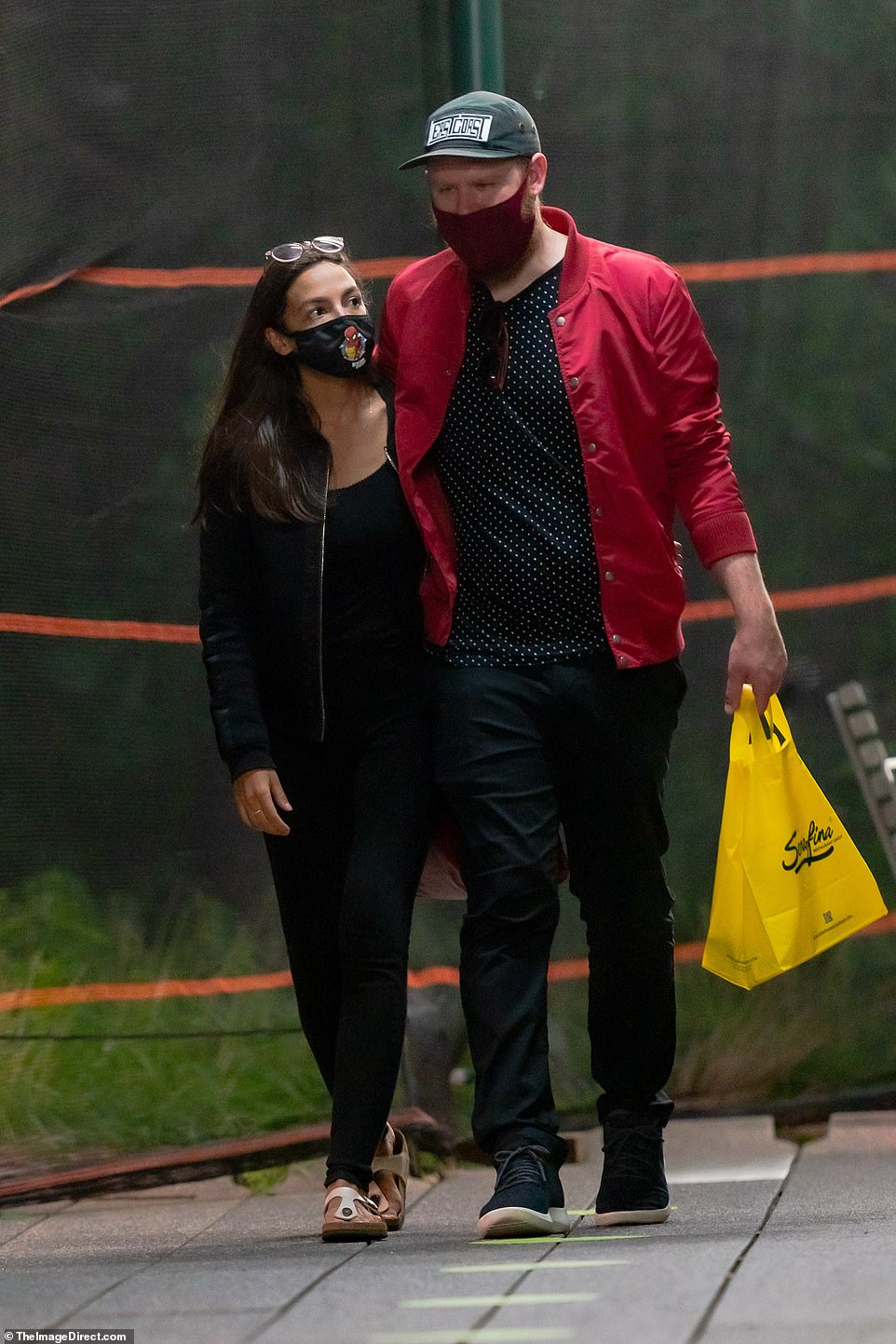 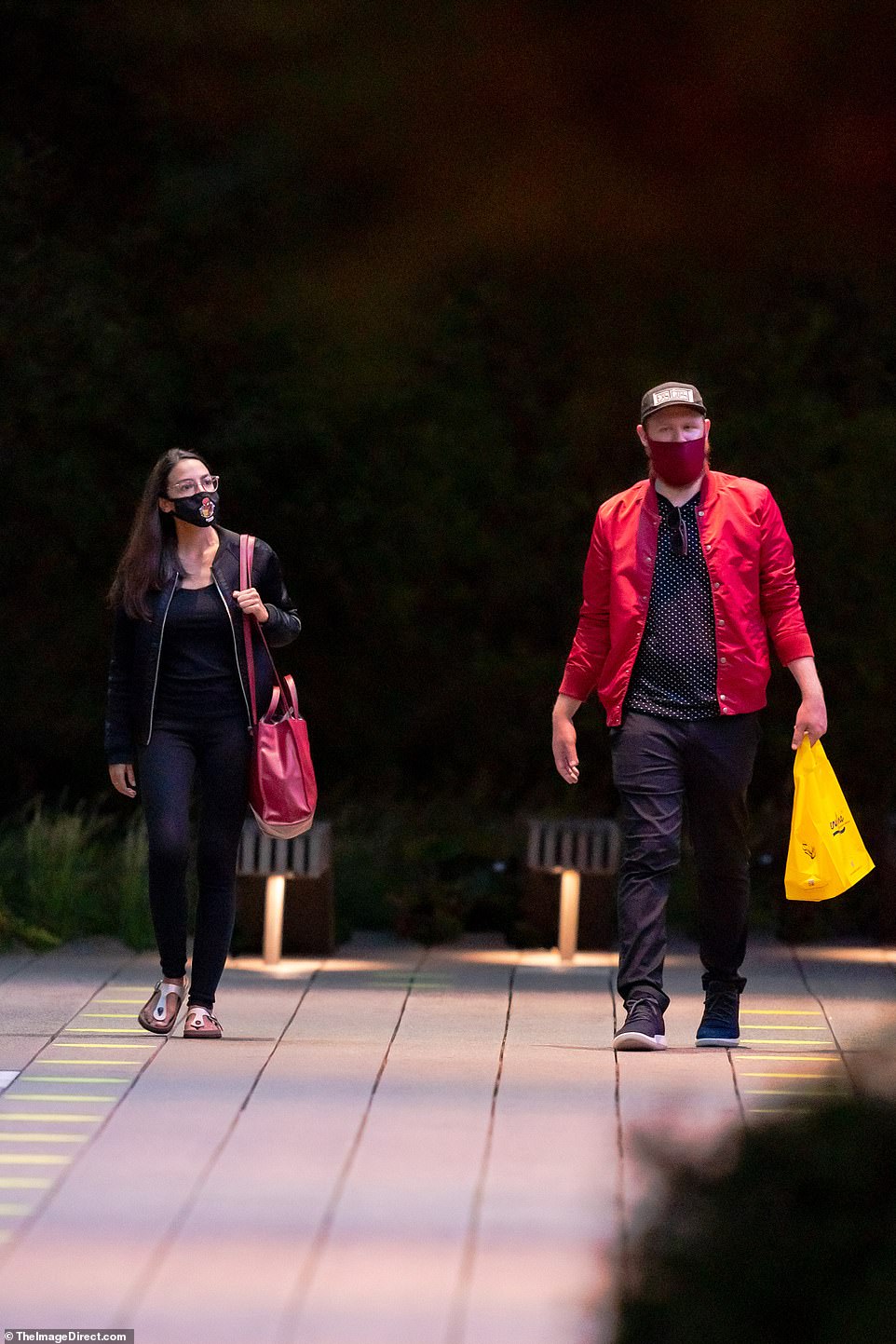 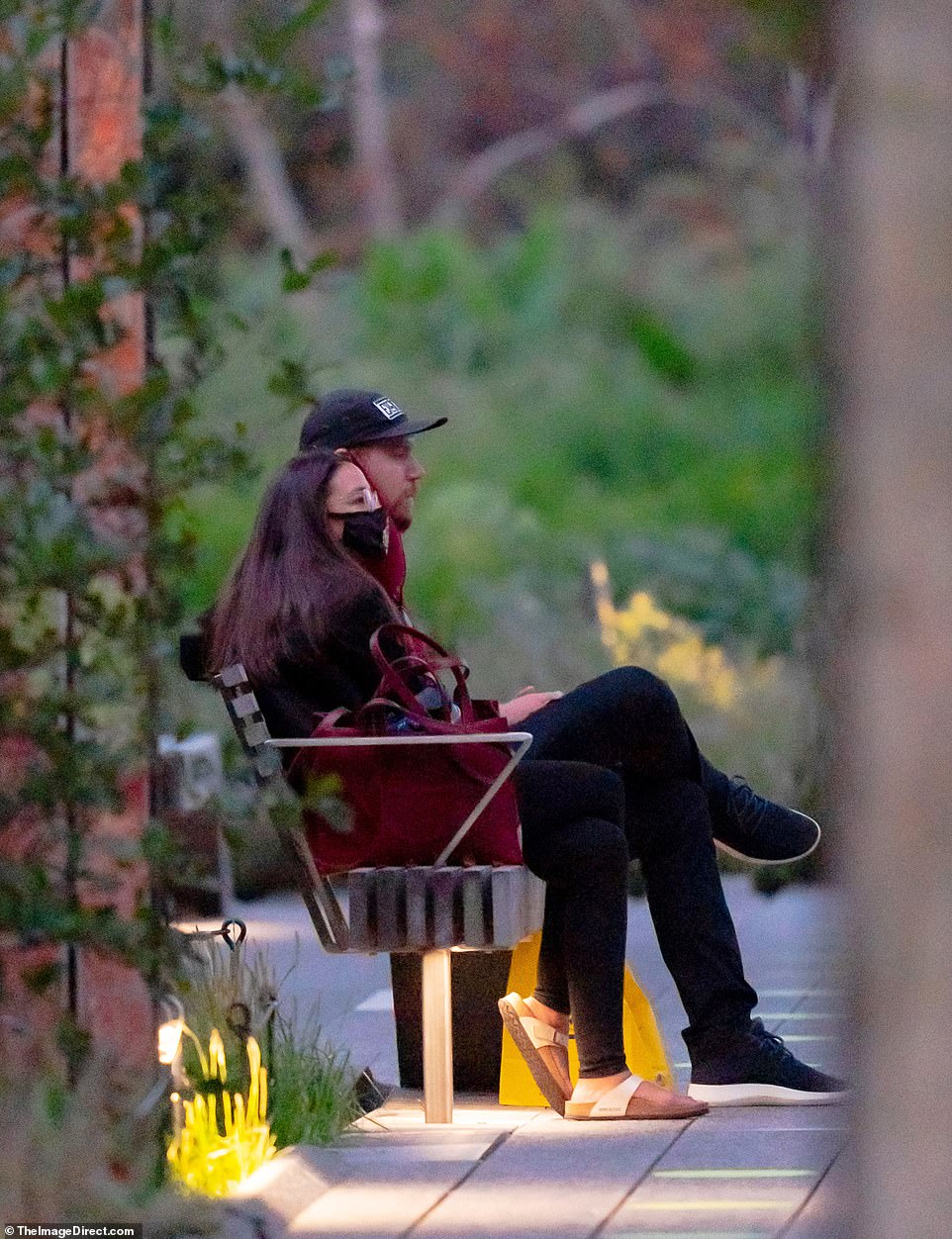 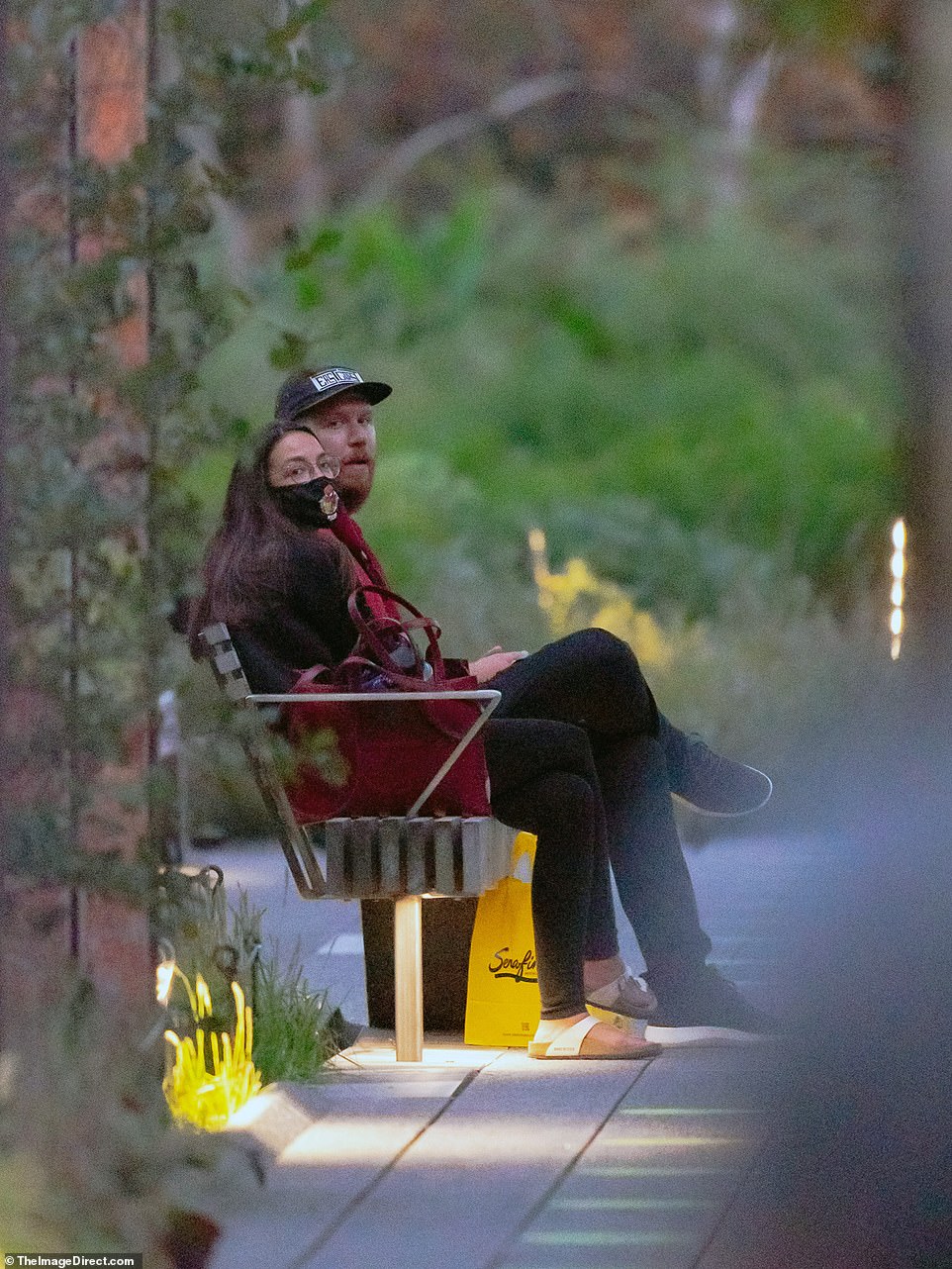 AOC and Roberts left their French Bulldog, Deco, at home