President Donald Trump took swings at Chris Wallace days before the Fox News host is to moderate the first presidential debate – accusing Wallace of being ‘controlled’ by the left.

The president has long complained that he gets unfair treatment in debates, and his team spent months seeking to negotiate better terms as he prepares to face Democrat Joe Biden stage.

But with a prime-time clash set on dicey topics as the coronavirus, race, and social unrest, Trump opted to go after the moderator with the ability to sift questions and pursue follow-ups.

‘He’ll ask me tough questions and it’ll be unfair, I have no doubt about it,’ Trump predicted. ‘But he’ll be controlled by the radical left. They control him,’ he said in an interview with Fox & Friends cohost Brian Kilmeade on Kilmeade’s radio show Thursday.

Trump went on to tout the ratings that Trump brought Wallace in their July interview.

‘Chris likes me because his world is all about ratings,’ Trump said.

‘I would be willing to bet that he won’t ask Biden tough questions,’ he said.

Wallace famously grilled Trump during their July sit-down, pushing back after Trump bragged that he aced a cognitive test.  Wallace countered that ‘it’s not the hardest test.’

Then Wallace added: ‘They have a picture and it says ‘what’s that’ and it’s an elephant,’ Wallace noted – even airing an image of the elephant picture in his broadcast. ‘No, no, no,’ Trump pushed back. ‘You see, that’s all misrepresentation.’

Kilmeade defended his Fox colleague from Trump’s blasts. ‘I can tell you for sure that he’s not controlled by anyone,’ he said of Wallace, who is deemed a tough interviewer by many prominent Republicans and Democrats.

‘Then he’s got to ask tough questions of Biden,’ Trump retorted.

He then complained that harder questions were levied against him than Hillary Clinton during his debates against her in 2016.

‘I had it last year where ABC was asking Hillary Clinton these littler powder puff questions,’ he said, using a term related to girls football games.

Then Trump turned his fire on Biden, claiming he ‘has a tremendous advantage’ due to a long career in politics, countering: ‘But I have a much better record than he does.’

Trump also indicated a possible line of attack – going after Biden’s son Hunter after a Republican report said he had gotten $3.5 million in fees tied to the mayor of Moscow.

‘His son and him. He knew everything. Stole money from Russia. This just came out. 3 1/2 million bucks they got. And he was in charge of Russia,’ Trump said.

Trump simultaneously claimed the Democratic nominee is taking the day off from the campaign trail because he needs to rest. 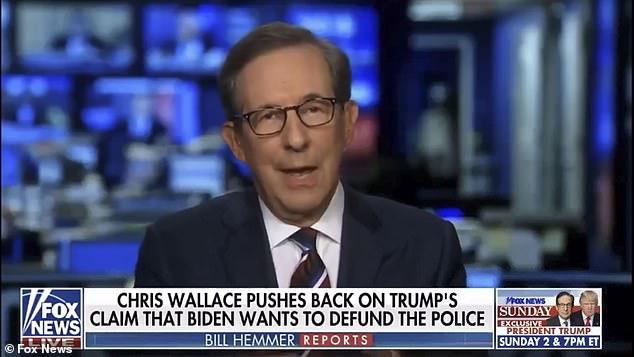 ‘He’ll be controlled by the radical left. They control him,’ President Trump said of Fox news host Chris Wallace, who will moderate Tuesday’s presidential debate

‘He is a very LOW ENERGY INDIVIDUAL, and our Country cannot make it in these exciting, but complex and competitive times, with a Low Energy President !!!’ he added.

Biden, 77, said Wednesday he is spending the day off the trail Thursday to begin more intense debate preparation.

‘I started to prepare but I haven’t gotten into it really heavily, we’ll be beginning tomorrow,’ Biden told reporters as he boarded a flight to North Carolina on Wednesday.

Trump said Thursday morning that he is at a disadvantage in the upcoming debates due to Biden’s near-half century of experience in Washington D.C.

‘I think I’m the one without experience,’ Trump told coned to Fox News host Brian Kilmeade during a live call-in on his radio show. ‘He’s been doing this for 47 years plus.’

‘He has a tremendous advantage if you think about it,’ the president continued, then employed his critical nickname of his primary competitor. ‘The guy with the advantage is sleepy Joe Biden.’

Donald Trump slammed ‘sleepy Joe Biden’ for taking a day break from the campaign trail, claiming ‘our Country cannot make it… with a Low Energy President!!!’ 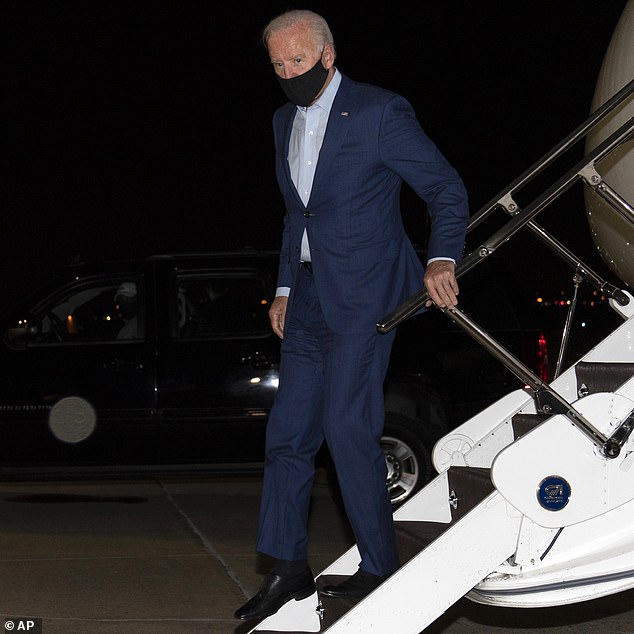 Biden served as a U.S. Senator from Delaware for 36 years and immediately following served for eight years as Barack Obama‘s vice president.

The 74-year-old president and Biden will face-off in their first in-person matchup on Tuesday in Cleveland, Ohio where Fox News host Chris Wallace will host the first debate of the 2020 general election season.

The president has done several one-on-one interviews with the ‘Fox News Sunday’ host who is known for grilling his political interviewees.

Biden, however, has been invited several times to sit down with Wallace and has declined to do so – as he continues to dodge many live interview television requests.

Kilmeade suggested Trump could have an advantage in the first debate since he has become used to Wallace questioning style and is more familiar personally with the host.

Trump pushed back against this claim. 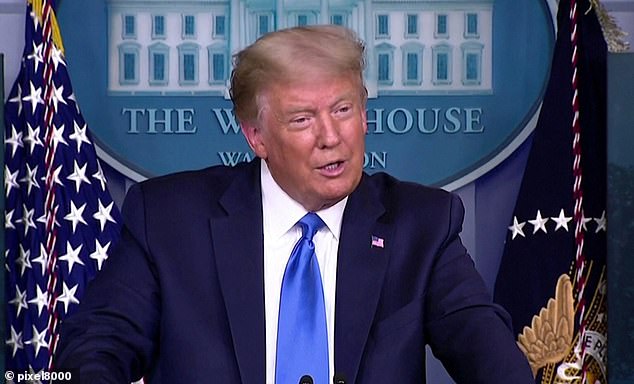 There are two other presidential debates before the election on November 3.

Trump and Biden will meet in Miami, Florida on the evening of Thursday, October 15, where C-SPAN’s Steve Scully will moderate the town hall meeting format for the debate.

The third and final debate will be held in Nashville, Tennessee October 22 and will be hosted by NBC’s Kirsten Welker.