BREAKING NEWS: New York Gov Andrew Cuomo says indoor dining can start again in NYC from the end of September at 25% capacity – just one day after saying he wouldn’t allow it

By Emily Crane For Dailymail.com

New York Governor Andrew Cuomo says indoor dining can resume in New York City at the end of the month just one day after saying it couldn’t be done.

Restaurants will be allowed to welcome diners back indoors from September 30 at 25 percent capacity, Cuomo announced on Wednesday.

Cuomo said ‘strict restrictions’ will need to be in place in order to offer indoor dining again, including that restaurants have to close by midnight.

All diners must have their temperatures checked at the door and one member of each party has to provide contact information for tracing if needed.

There can also be no service at the bar.

Cuomo said the state would establish a whistleblowing system whereby New Yorkers can report restaurants not in compliance. 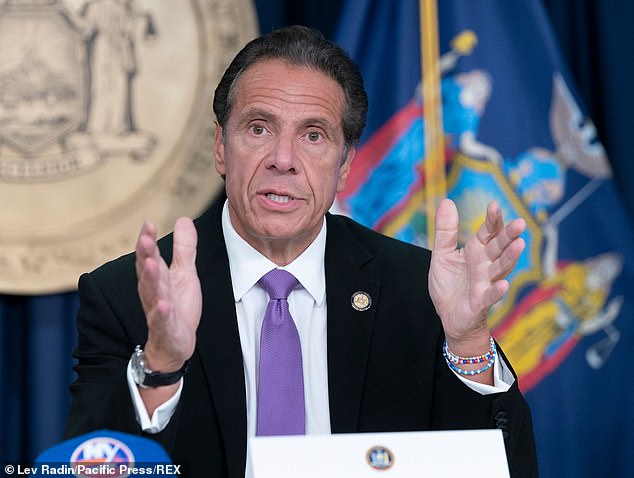 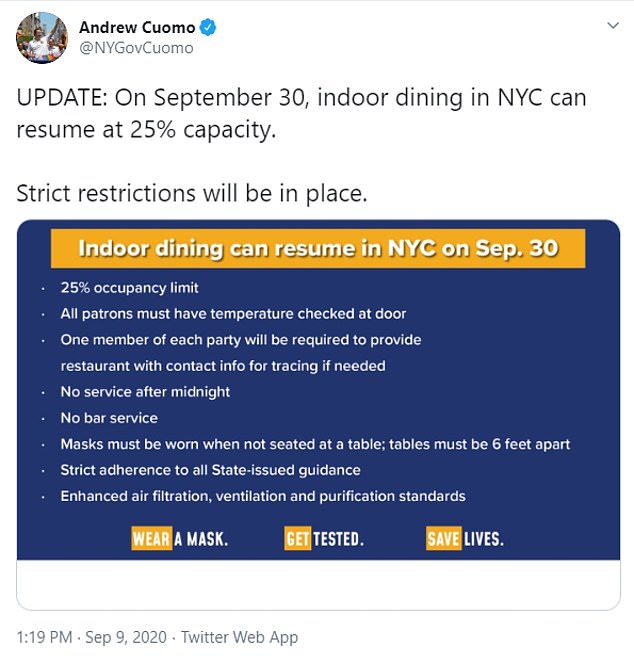 Cuomo said ‘strict restrictions’ will need to be in place in order to offer indoor dining again, including that restaurants have to close by midnight

Cuomo said that if infections rates were still low by November 1, he would reassess if NYC restaurants could open at 50 percent.

The city’s outdoor dining scheme is due to expire in October. It is not yet clear if that will be extended.

The infection rate in New York City has been less than one percent for a month.

The abrupt announcement comes just one day after Cuomo insisted that indoor dining could not resume because he argued it would double the number of bars currently open and there was no one to enforce social distancing standards.

On Wednesday, Cuomo said the city would contribute 400 personnel to an existing task force made up of the State Liquor Authority and state police to ensure compliance.

Prior to Cuomo’s announcement, New York City was the only place in the state of New York that has not been allowed to welcome diners inside again. 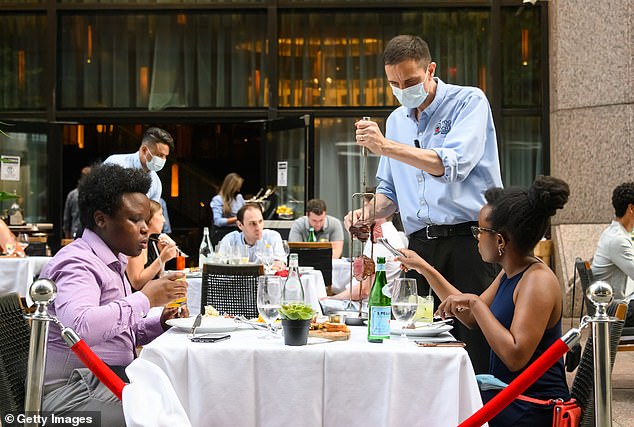 Restaurants will be allowed to welcome diners back indoors from September 30 at 25 percent capacity, Cuomo announced on Wednesday

He had said on Tuesday that he would not allow indoor dining to start up again unless the city – ie Mayor Bill de Blasio – came up with a unique task force to enforce the rules.

‘We have seen that opening bars has created a compliance and enforcement nightmare,’ Cuomo had said.

‘From our experience Upstate, opening indoor dining caused issues. I beseeched the local governments to help and they did not.

‘I would need additional enforcement capacity. It could be a local police department or it could be local health inspectors.’

Restaurant and bar owners in NYC have been crying out for some form of break for months.

A conglomerate of bar and restaurant owners had recently filed a lawsuit against the state for $2billion in damages, claiming they were being unfairly shackled and stopped from making money due to the lack of indoor dining.

A New York State Restaurant Survey on September 3 revealed that a staggering 64 percent of restaurants said they would not be able to stay open if indoor dining wasn’t allowed soon.