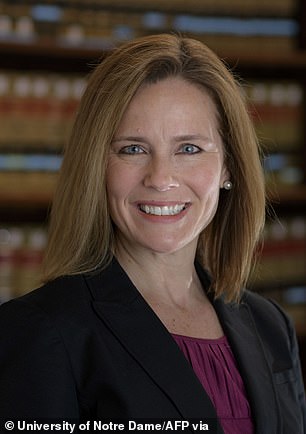 Democrats are being warned against using presumptive US Supreme Court nominee Judge Amy Coney Barrett’s Catholic faith against her if questioning her during confirmation hearings.

Barrett was Trump’s nominee for the U.S. Court of Appeals for the Seventh Circuit in Chicago, a position she has held since 2017.

She’s also a mother of seven – to five biological and two adopted children – and a devout Roman Catholic, a fact that her detractors have used against her because they believe that she won’t be able to keep her religious views separate from her judicial opinions.

Former Sen. Joe Lieberman said Friday that it would be a mistake for Democrats to focus too hard on Barrett’s Catholicism during potential confirmation hearings because it would ‘hurt her opponents.’

Lieberman told Fox News that, ‘You can disagree with somebody based on whether they’re pro-life or pro-choice, but when you start to say that you’re against them because their religion, in this case their Roman Catholicism, determines their point of view, you’re doing something really abhorrent that I think is bigoted, is un-American, and incidentally, is unconstitutional.’

Liberman also said that, ‘In America, we don’t question anybody who’s seeking an office of public trust based on their religion – that’s what America’s all about.’ 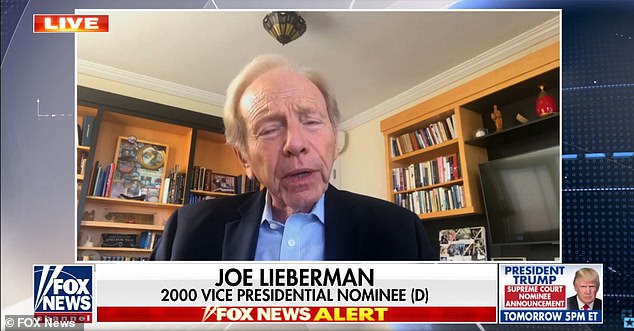 Former Sen. Joe Lieberman said in a new interview that focusing too hard on Barrett’s Catholic faith during her potential confirmation hearings would be damaging for Democrats

During the interview, Lieberman, a former Democrat-turned-Independent, noted that Article VI of the US Constitution states that ‘you can’t apply a religious test for any office of public trust in America. That’s how wise and fair the people who wrote the Constitution were.’

When it was pointed out that Democrats had rallied around Catholic John F. Kennedy when he was running for president, Liberman said that ‘JFK was a great hero and inspiration for my generation to get into public service.’

He added that ‘we really broke a barrier that I’d hate to see us come back and see someone like Judge Barrett, if she’s nominated tomorrow, face again.’

Part of the attention on whether Barrett’s Catholicism will be a factor during potential confirmation hearings can be traced back to her 2017 hearing for her Court of Appeals seat.

During one exchange, California Sen. Dianne Feinstein, a Democrat, questioned whether Barrett would be able to keep her faith separate from her legal opinions.

‘The conclusion one draws is that the dogma lives loudly within you,’ Feinstein said, adding ‘that’s of concern when you come to big issues that large numbers of people have fought for years in this country.’

One issue in particular that progressives at the time were worried about was whether Barrett would attempt to roll back abortion rights.

Lieberman said that, ‘I thought Sen. Feinstein’s question in that case was really improper, and was biased really.’

He added that, ‘Everybody brings to the Senate, to the Congress, to [the] Supreme Court experiences and beliefs that they have.’

Following word that Barrett appeared to be Trump’s presumptive Supreme Court pick, CNN asked Feinstein if she would question Barrett on her Catholicism again, but Feinstein declined to answer, responding instead, ‘I’m not going to go there.’

Sen. Mazie Hirono, a Democrat from Hawaii, who sits on the Senate Judiciary Committee told the news organization Tuesday that Barrett’s religious views shouldn’t be off-limits.

But, Hirono also said that, in 2017, it wasn’t specifically Barrett’s religious views that was the issue, it’s ‘anybody’s views that they bring to their decision making.’

‘So they keep telling us that none of the things they wrote or said yesterday should infringe on their decision, but how can we be assured that they can be objective?’ Hirono asked.

‘Why should we say you get a lifetime appointment so that you can reflect your ideological agenda in your decision making?’

Another Judicial Committee member, Sen. Sheldon Whitehouse, Democrat from Rhode Island, also said Tuesday that ‘a person’s religious views or background should not make any difference so long as it’s clear that they can leave that personal background at the robing room door, and give impartial justice to whomever is before them irrespective of whether the personal religious views might dictate something different than the law.’

Durbin told CNN that should Barrett come before them for a confirmation hearing, ‘Democrats needed to ‘take care that we respect the Constitution, that we ask her probative questions, respectful questions and make certain the American people understand where any nominee stands.’

Lieberman told Fox News that: ‘If Judge Barrett is nominated by the president, I hope and pray – I literally mean in this case pray – that senators who question her are not at all affected by her devotion to her Roman Catholic faith.’

The self-described ‘religiously observant Jew’ said that he respected Barrett for her devotion and that the senators ‘ought to judge her on her judicial opinions and her legal testimony before the Judiciary Committee.’

Earlier in the week, Sen. Joe Manchin, a Democrat from West Virginia, had said that he intended to vote ‘no’ for Barrett if she was nominated – not because of her potential religious and judicial conflict, but because of concerns about Republicans trying to cram in a confirmation so close to the 2020 Presidential Election.

When asked by CNN about the 2017 Feinstein ‘dogma’ remark, Manchin pointed out that he’s Catholic.

‘Religion should not play a part,’ he said. ‘I don’t know why that was ever brought up. And she’s, she believes what she believes; I believe what I believe.’

Feinstein declined to elaborate on what the Democrats’ plan would be if Barrett should get Trump’s nomination. Instead, she said, ‘Let’s wait till she’s nominated.’

Advocacy group leaders Friday have already made their stances on Barrett known, issuing statements condemning her as the potential choice for a new Supreme Court justice.

‘If confirmed, Judge Amy Coney Barrett will unleash a Supreme Court majority that is hostile to all of our basic civil rights, and the impact will be felt for decades,’ LAMBDA Legal group head Kevin Jennings told Reuters.

‘Judge Barrett’s personal belief that marriage is between a man and a woman, coupled with her unwillingness to affirm that the Supreme Court’s decision making marriage equality the law of the land is settled law, should sound the alarm for anyone who cares about LGBTQ people and their families.’

LGBT rights group president Alphonso David said that if Barrett ‘is nominated and confirmed, Coney Barrett would work to dismantle all that Ruth Bader Ginsburg fought for during her extraordinary career.’

Meanwhle, Brett Hartl, the government affairs director for the Center for Biological Diversity called Barrett ‘an ideological fanatic who lacks the temperament to rule fairly in the interests of all Americans.’

Hartl also noted that Barrett’s ‘slim judicial record shows that she’s hostile to the environment and will slam shut the courthouse doors to public interest advocates, to the delight of corporate polluters. Environmental justice, our climate and wildlife on the brink of extinction will all suffer if Barrett is confirmed.’