A knife-wielding man has been shot by police in front of shocked shoppers as a horrified witness described the scene.

The terrifying encounter occurred outside of Lilydale Market in northeast Melbourne at about 9.10am on Tuesday morning.

A woman named Pauline witnessed the tense scene on her morning walk and described the incident in a dramatic radio interview.

‘He’s decided to walking through the car park, there are guns drawn and they’re yelling at him to put the knife down… there are three of them with guns drawn,’ she told 3AW. 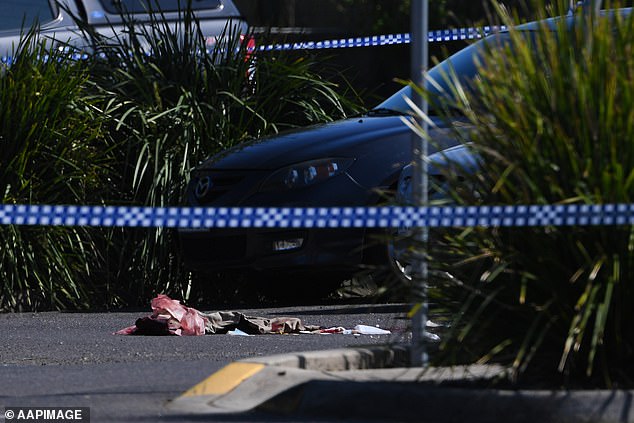 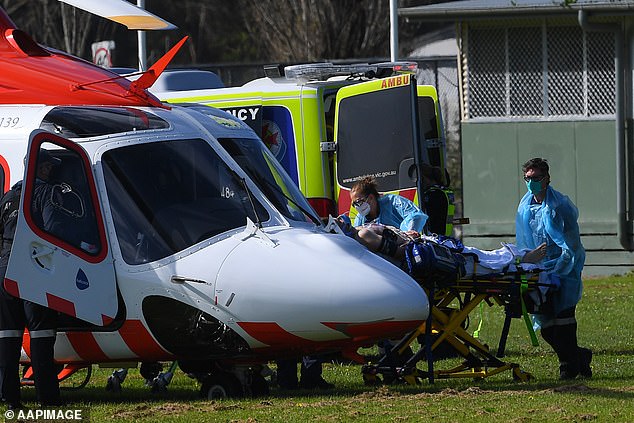 Pauline said the man was ‘brandishing quite a large knife’ and ‘just wandering around’ before beginning to walk away from the centre.

She described the standoff and said police were backing up with their guns drawn and holding pepper spray and tasers.

Pauline said she could see at least five police officers, several police cars and an ambulance before multiple shots were heard in the background.

‘Oh s*** they’re shooting, they’ve just shot. I can’t see if they’ve shot him but there’s just been three or four rounds… It looks like they’ve taken him down.

‘I can’t see if they’ve actually shot him but there’s a lot of police scurrying around right now,’ she said.

Pauline said a special operations police squad also arrived on the scene as an ambulance approached the man in the car park. 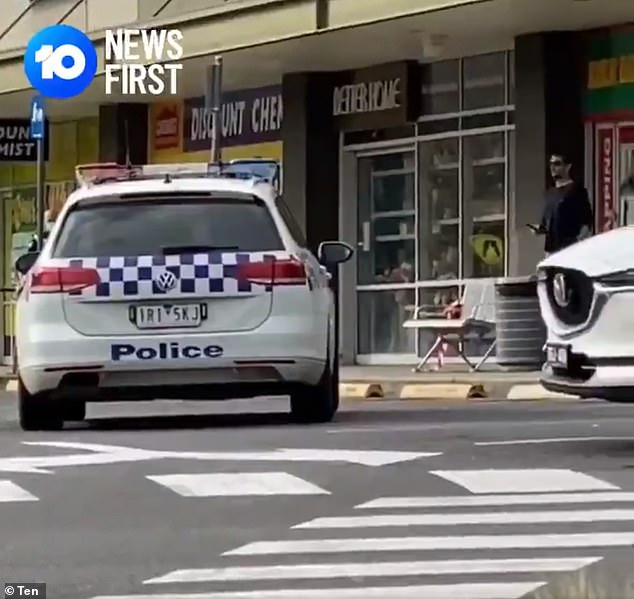 Victoria Police were forced to shoot the knife-wielding man in the shopping centre car park (pictured) just after 8.30am on Tuesday morning after he refused to drop the weapon 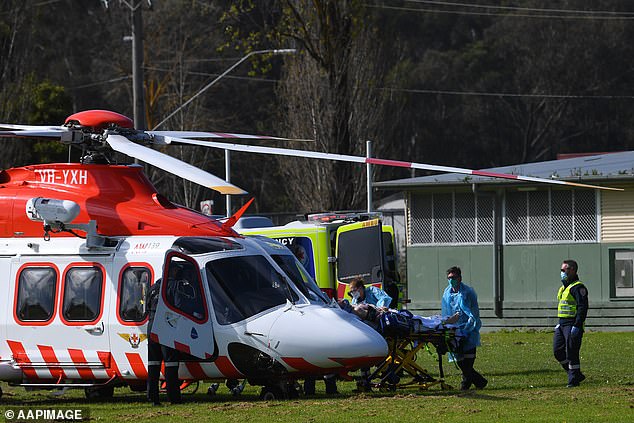 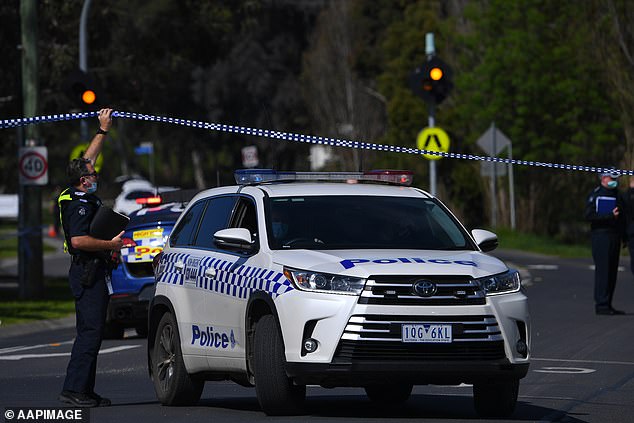 Police were armed with guns, pepper spray and tasers and called for the man to drop his knife before shooting. Victoria police remain on the scene (pictured)

Victoria Police were called to the marketplace at about 8.30am after ‘a man armed with an edged weapon’ was reported on Hutchinson Street.

‘Officers attempted to speak with the man who refused to drop his weapon.

‘Police discharged their firearms, shooting the man about 9.10am,’ a Victoria Police spokesperson said.

Paramedics also arrived at the shopping centre about 8.45am and an air ambulance was dispatched.

The man received medical treatment on the scene before being taken to hospital in the ambulance helicopter. 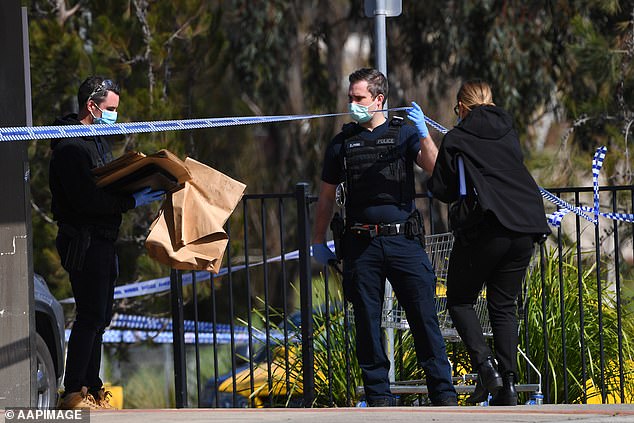 Victoria Police (pictured) were called to the shopping centre at 8.30am after receiving reports of ‘a man armed with an edged weapon’ on Hutchinson Street 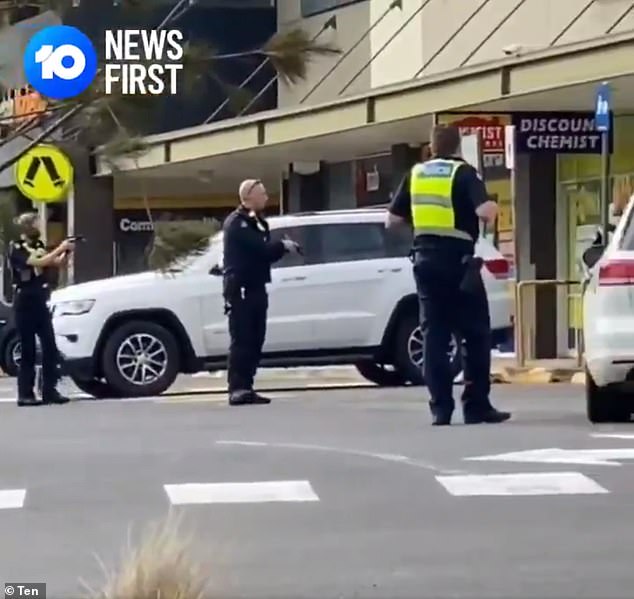 A statement from Ambulance Victoria said the man was being treated for upper body injuries and was believed to be in a critical condition.

‘He is currently being treated for life threatening injuries.

‘The incident is under investigation and Professional Standards Commands have oversight,’ the police spokesperson said.

Another witness, Glen Monteith, had just dropped off his son at childcare and went to the marketplace to get breakfast when he saw the man surrounded by police.

He said the man appeared to be aged in his mid-thirties and was brandishing a 15-centimetre-long knife. 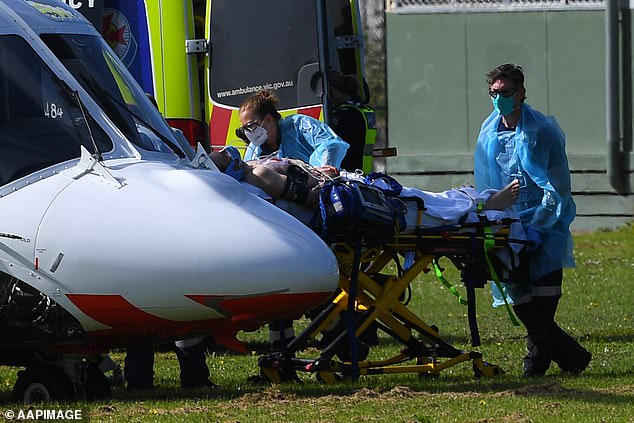 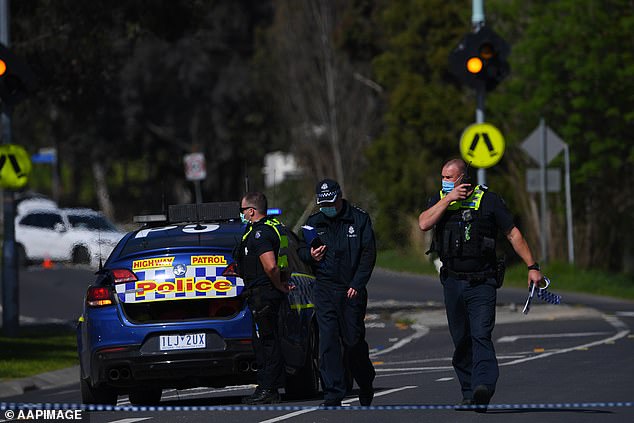 Witnesses said several Victoria Police cars, officers (police pictured at the scene) and an ambulance were present before multiple shots were fired

‘There was a man sort of walking back and forth in sort of a 10-metre area with a knife just sort of talking to himself, ranting and raving a bit,’ Mr Monteith told The Age.

The father said police shouted at the man to put the knife down for at least 10 minutes before firing their guns.

‘He took a few steps and started to speed up and the senior policeman fired first and two other (officers) shot as well. I heard three shots,’ he said.

‘From my perspective the police did a fantastic job, they gave him every opportunity to put the knife down, they tried to talk him down for 10 to 15 minutes ‘

Mr Monteith explained the man dropped to the ground and officers ran to get paramedics.

The paramedics then stripped off the man’s shirt and began treating him before the ambulance helicopter arrived. 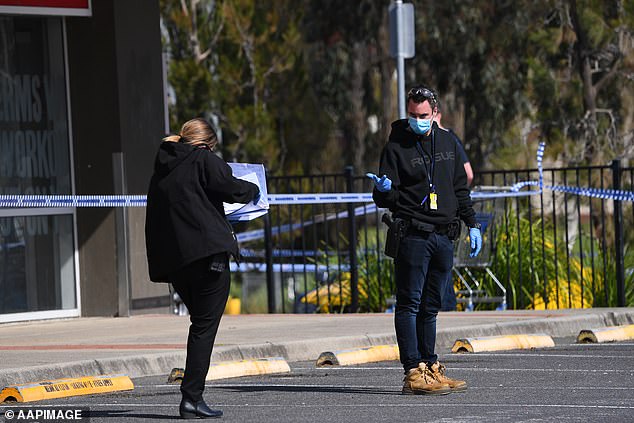 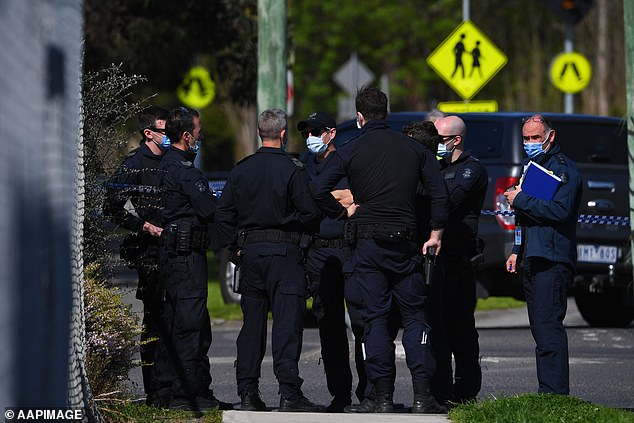 A witness described the standoff with police in a dramatic radio interview. She said police had drawn their guns and well as tasers and pepper spray (Police at Lilydale market pictured)