By Emer Scully For Mailonline

A murder investigation has been launched after a woman was found dead at £1.6million mock-Georgian home in a leafy cul-de-sac.

Police were called at around 9.15pm on Tuesday after an unnamed 66-year-old woman was found collapsed in Bexley village, south east London.

The detached mock-Georgian double-gated property was cordoned off by police today after she was pronounced dead at the scene by paramedics.

A post mortem is due to be held to establish the cause of death. 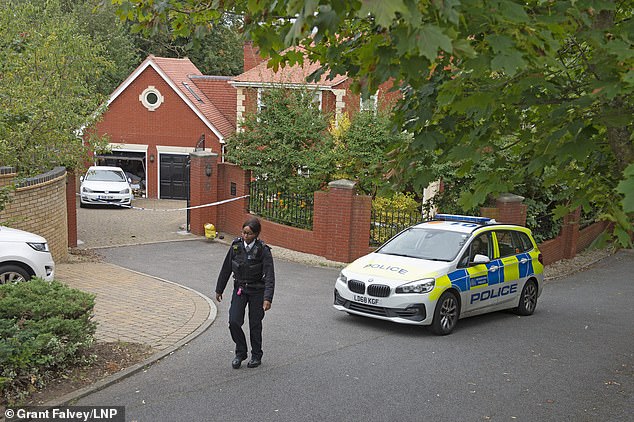 Police were called at around 9.15pm on Tuesday after the unnamed woman was found collapsed in Bexley village, south east London. Pictured, police at the scene today

The death is being treated as suspicious as a man was arrested on suspicion of murder after the grim discovery in the suburb on the London and Kent border.

He was taken to a south London police station where he remains at this time.

The Met Police say the man and the woman are believed to be known to each other.

Formal identification of the woman has not yet taken place.

She was described as ‘lovely’ by one neighbour who did not want to talk about the tragedy.

Officers were today manning a cordon at the top of Becketts Close, where the horror unfolded.

A police van was parked outside the early-2000s property. The gates were open but a cordon was draped across it. 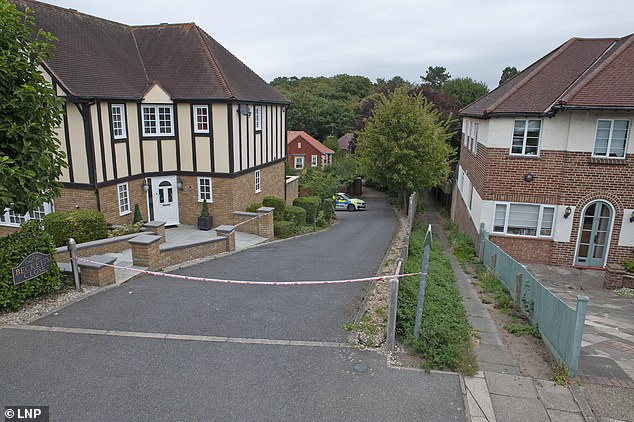 Officers were today manning a cordon at the top of Becketts Close, where the horror unfolded

The garage door was left open with a white Volkswagen parked outside. The house is in a side street cul-de-sac next door to just one other home in a desirable area.

There are also mock Tudor and white rendered mansions in the leafy area with BMWs, Audis and Range Rovers parked in the street.

One local said: ‘It’s such a quiet area usually – there are a lot of families and it’s a good mix of people. There’s no troublemakers.

‘But last night there were about four police cars with their flashing lights on and an ambulance. That never happens round here.

‘I couldn’t believe it when I heard someone had been murdered. It’s so tragic.’

Another woman said: ‘It’s such a peaceful neighbourhood and we all look out for each other. It’s a tremendous shock to us all.’

One neighbour who lives near the property said: ‘We are all totally shocked. We can’t believe something like this would happen.

‘It’s such a nice quiet area. We don’t know who the lady is but our thoughts are with her poor family.

‘It’s a terrible thing to happen.’

A murder investigation has been launched led by Detective Chief Inspector Mick Norman.

He said: ‘We are at the very early stages of our investigation, we have arrested a man and our enquiries continue at a pace.

‘Our thoughts are with the deceased’s family at this sad time. I urge anyone who has information, but has not yet come forward, to get in touch without delay.’