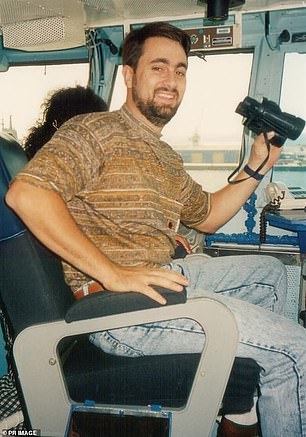 A former social worker who was attacked by Claremont killer Bradley Robert Edwards has spoken out to reveal the seemingly innocent question he asked before subjecting her to a brutal assault.

While working as a Telstra employee, Edwards came up from behind to attack Wendy Davis as she worked at her desk at Hollywood Hospital in Nedlands, western Perth in May 1990.

The assault occurred in the years before he murdered Jane Rimmer, 23, in June 1996 and solicitor Ciara Glennon, 27, in March of the following year.

Edwards, now 51, was convicted of the killings on Thursday after a marathon seven-month trial in the WA Supreme Court – but he was found not guilty of killing a third woman Sarah Spiers, 18.

Ms Davis – who can remember the attack she fell victim to with almost perfect clarity three decades later – said she felt ‘blessed’ she was still alive to tell her story.

‘I can remember what I was doing because it was my youngest daughter’s 11th birthday and I was hurrying to get this report done so I could get home at a reasonable hour,’ she told 60 Minutes. 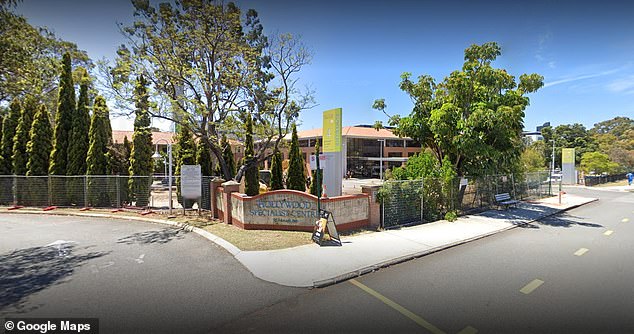 Wendy Davis was attacked as she worked at her desk at Hollywood Hospital in Nedlands, western Perth in May 1990

The voice was that of Edwards, then 21, who moments later dragged Ms Davis out of her chair without warning.

She said Edwards went behind her to go to the toilet – but she heard it flush quickly after.

‘Just when I was thinking those things a hand came from behind me with a cloth on it around my face. Another came around and hoicked me off my chair and started to drag me towards the toilet area and the utility room,’ she said.

‘I was absolutely petrified. I thought there was something on the cloth and I thought I was going to die – the force with which he did it was so frightening. I was so scared and I couldn’t breathe.’

Ms Davis then realised there was nothing on the cloth and kicked herself free.

‘I fell away and I looked at him and it was the weirdest, weirdest feeling because he had this strange look in his eye, like it was completely disassociated,’ she said. 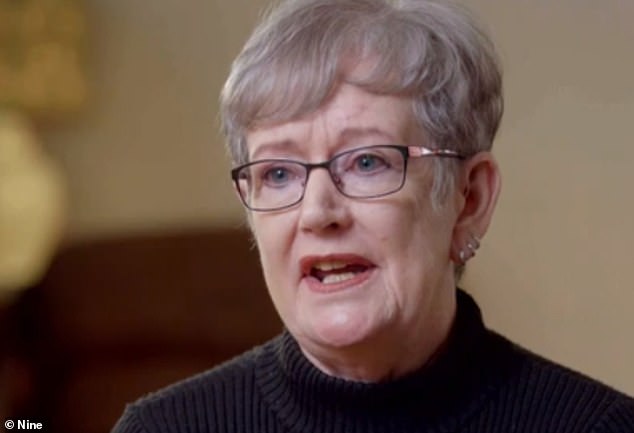 Edwards was given a two-year probationary sentence for common assault, but could largely evade police attention because of the relatively minor nature of the crime.

Ms Davis hit out at Telstra for trying to shield Edwards rather than support her – claiming a manager for the company said the young man was suffering from relationship problems at the time.

Before the murders for which he was sentenced last week, Edwards also raped a 17-year-old girl in 1995.

He had denied murdering secretary Ms Spiers and childcare worker Ms Rimmer in January and June 1996 respectively, and solicitor Ms Glennon in March the following year. 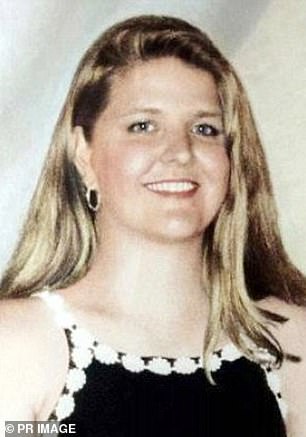 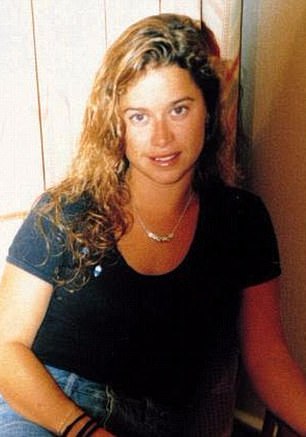 Justice Stephen Hall convicted Edwards, now 51, for the murders of Jane Rimmer (left), 23, and Ciara Glennon (right), 27, on Thursday after a marathon seven-month trial in the WA Supreme Court 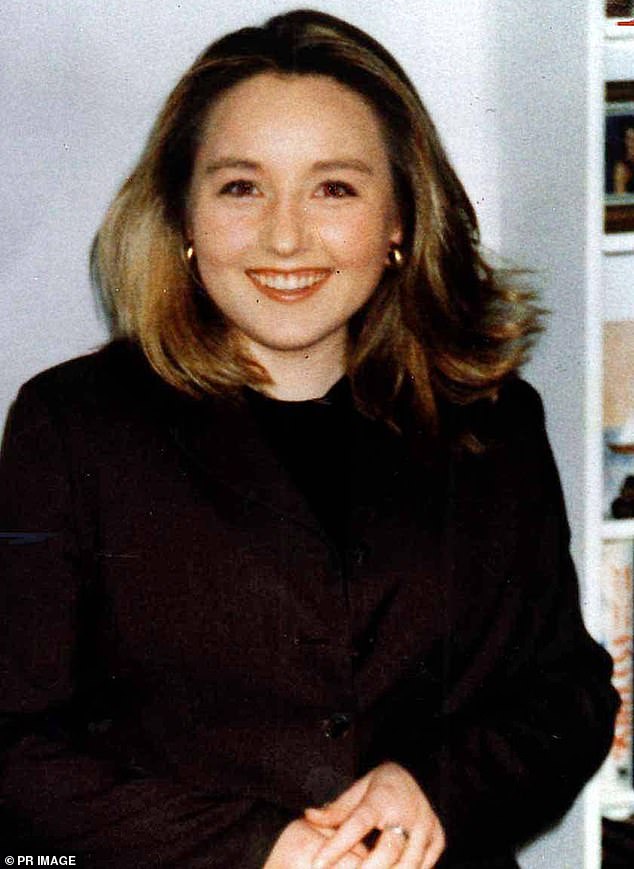 Justice Hall however found Edwards not guilty murdering Sarah Spiers (pictured), 18, saying there was not enough evidence to convince him beyond reasonable doubt. Ms Spiers’ body has never been found

Prosecutors relied on DNA evidence collected under Ms Glennon’s fingertips as she scratched and scrapped for her life.

Also key to their case were fibres found in Edwards’ car that linked it to the bodies of Ms Rimmer and Ms Glennon. 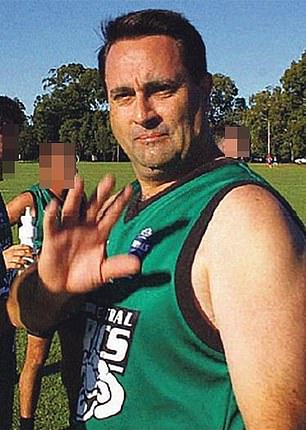 Bradley Robert Edwards has been found guilty of the serial killings of two women in Claremont, Western Australia, across 1996 and 1997

Police had long had their sights on the now convicted killer – who called himself the ‘bogeyman’ online – but he repeatedly lied to them about his crimes.

Justice Hall took almost three months to consider all the evidence against Edwards, before handing down his verdict.

Outside court Ms Rimmer’s sister Lee said she could now get on with her life, but felt for the Spiers family who continue to search for answers.

‘I feel really good actually, at one point I thought he was going to be not guilty but we got the result we wanted and now we just have to keep working for the Spiers family and hope someone finds Sarah,’ Ms Rimmer said.

Addressing the media on Friday, Denis Glennon spoke of his daughter Ciara’s ‘great courage and determination to survive’.

‘As she fought to save her life, she left us the vital DNA clues,’ Mr Glennon said.

‘Ciara was strong in spirit, had courage, great courage but yet as she fought to save her life she could not save herself because of the brutal assault by her murderer.’

The 27-year-old lawyer was the third woman to vanish from the streets of of Claremont in Western Australia in the mid-1990s.

Edwards was arrested in December 2016.

‘What the f***?’ the former Little Athletics coach exclaimed while sitting handcuffed on the floor of his Kewdale house when police told him he was suspected of being the Claremont serial killer.

‘You’ve got to be joking,’ he said as detectives read him his rights. ‘My head is spinning. I understand. I’m just trying to process what’s going on.’

Part of Edwards’s defence was the scientific evidence may have been contaminated. 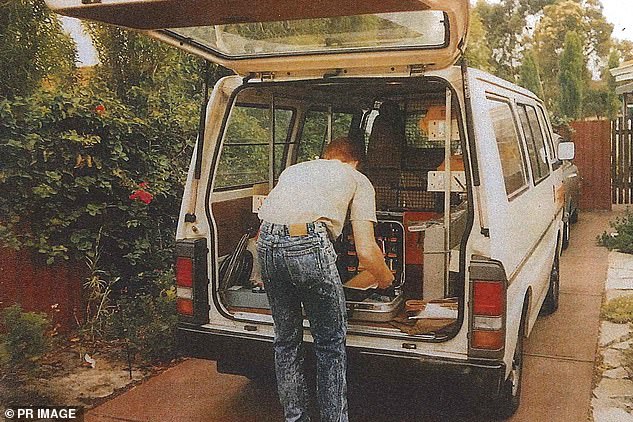 Bradley Robert Edwards is pictured at the back of a van while he was married to his first wife, who gave evidence the couple had separated in late 1995 or early 1996

Defence counsel Paul Yovich SC urged Justice Stephen Hall in his opening address in November to ‘beware the tendency to smooth out the rough edges’ in the Crown’s case.

‘The defence is simple,’ Mr Yovich said. ‘It wasn’t him.’

‘We are not pointing the finger at any specific person, all we are saying is the nice, neat picture the state wants to present… is not the full picture.

The Crown also said fibres from Edwards’s work trousers and Telstra-issued car were found on the rape victim and the remains of Ms Rimmer and Ms Glennon.

Mr Yovich claimed DNA and fibre evidence could have been contaminated and that storing of such materials in the 1990s was much less sophisticated than it was now.

The prosecution evidence alone took five months to be heard and featured more than 200 witnesses.

But the defence case was almost over before it began.

Edwards chose not to step into the witness box or to give a detailed response to the murder charges.

The only evidence his barrister called for was weather records for the day Ms Spiers disappeared.

The Crown’s case closed with the playing over two days of a video of Edwards’s interview with police after his arrest.

That video showed Edwards appearing to be stunned when confronted with DNA evidence linking him to one of the Claremont killings, the Huntingdale attack and the rape of the teenager.

– An 18-year-old woman is indecently assaulted in her sleep during a break-in at a Huntingdale home but her attacker flees after a struggle.

– A 17-year-old girl is abducted while walking through Rowe Park in Claremont and taken to Karrakatta Cemetery where she is sexually assaulted.

– Secretary Sarah Spiers, 18, disappears after leaving Club Bayview in Claremont after calling a taxi from a nearby phone booth. Her body has not been found.

– Childcare worker Jane Rimmer, 23, similarly vanishes in Claremont and is last seen outside the Continental Hotel.

– Ms Rimmer’s body is found by a mother and her children picking flowers in Wellard, south of Perth.

– Ms Glennon’s body is found in bushland at Eglington, north of Perth.

– A newspaper claims police have established a forensic link between Ms Glennon’s murderer and the man who raped a teenager in Karrakatta two years earlier but police refuse to comment for ‘operational reasons’.

– Bradley Robert Edwards, 48, from Kewdale, is charged with eight offences related to the deaths of Ms Glennon and Ms Rimmer and the Karrakatta and Huntington attacks, but no charges are laid over the disappearance of Ms Spiers. Edwards is remanded in custody.

– Edwards is charged with the wilful murder of Ms Spiers.

– Edward pleads guilty to five of eight charges against him, including the Huntingdale attack and raping the 17-year-old girl at Karrakatta, but maintains he didn’t commit the murders.

– A judge-alone trial begins in the Western Australia Supreme Court.

– The trial is adjourned after all evidence has been heard.

– Bradley Robert Edwards is found guilty of the murders of Jane Rimmer and Ciara Glennon, but is cleared of killing Sarah Spiers

– Edwards will return to the WA Supreme Court for sentencing