Joe Biden was mocked by viewers last night after pulling out his phone and playing the megahit ‘Despacito’ at a Hispanic campaign event in Florida.

A grinning Biden played the song into a microphone after being introduced by its Puerto Rican-American singer Luis Fonsi at the event in Tampa, as the Democratic nominee seeks Hispanic backing in one of the chief battleground states.

But critics accused Biden of ‘pandering’ and mocked him for playing a song whose title translates as ‘Slowly’ – evoking Donald Trump‘s nickname ‘Slow Joe’.

Trump himself shared an edited video in which the song was changed to ‘F*** The Police’ by N.W.A., with the president asking: ‘What is this all about?’. 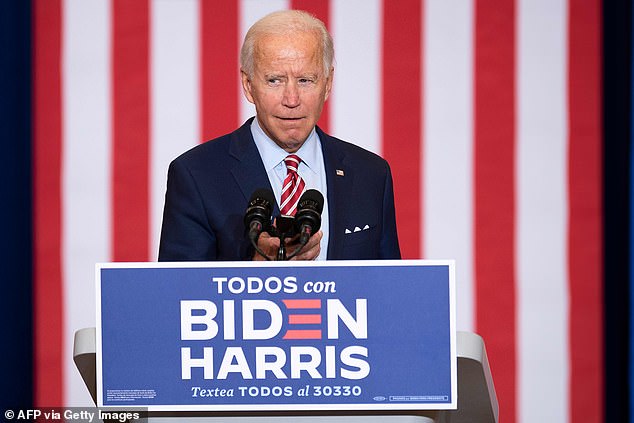 Democratic presidential nominee Joe Biden played ‘Despacito’ on his phone as he took to the stage to deliver a speech at a Hispanic Heritage Month kickoff event in Kissimmee, Florida 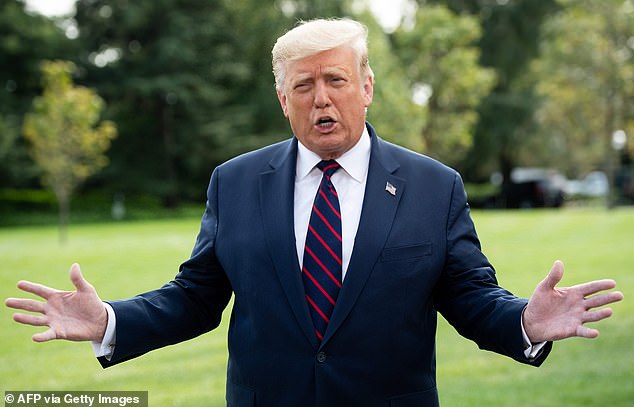 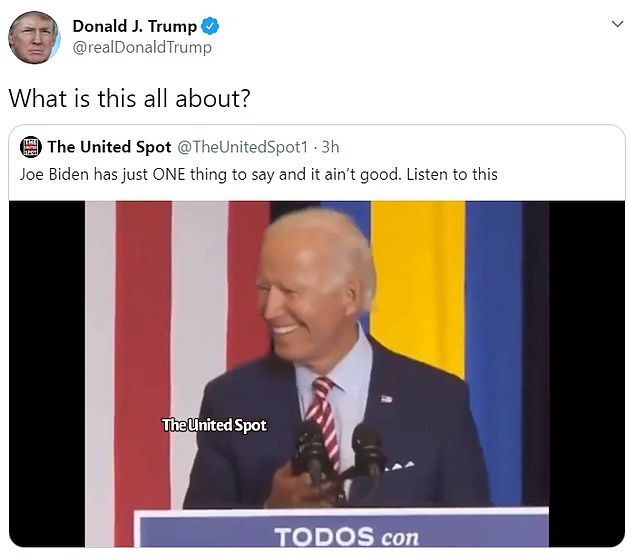 ‘What is this all about?’ he asked of the edited video he reposted Tuesday night

Biden played the song as he took  the stage ahead of a speech at a Hispanic Heritage Month kickoff event in Kissimmee.

The video showed him dancing cheerfully to the song before stating: ‘I’ll tell you what – if I had the talent of any one of these people, I’d be elected president by acclamation’.

This was Biden’s first trip to Florida as the nominee, as he launched an urgent mission to boost support among Latinos who could decide the election in one of the nation’s fiercest battleground states.

The president has previously hit out at his opponent, claiming that Biden supports the Defund The Police movement.

Even before Trump’s retweet, Biden was facing some backlash for the real video where ‘Despacito’ was used.

Another viewer said: ‘Joe Biden pandering to the Latino vote by playing Despacito is cringey.’

A win for Biden in Florida would dramatically narrow Trump’s path to re-election.

But in a state where elections are often decided by a percentage point, there are mounting concerns Biden may be slipping, particularly with the state’s influential Latino voters.

‘More than any other time, the Hispanic community, Latino community holds in the palm of their hand the destiny of this country,’ Biden said during Tuesday’s event.

‘You can decide the direction of this country.’

He was joined by several supporters including actress Eva Longoria, and singers Ricky Martin and Luis Fonsi.

An NBC-Marist poll released last week found Latinos in the state were roughly evenly divided between Biden and Trump. 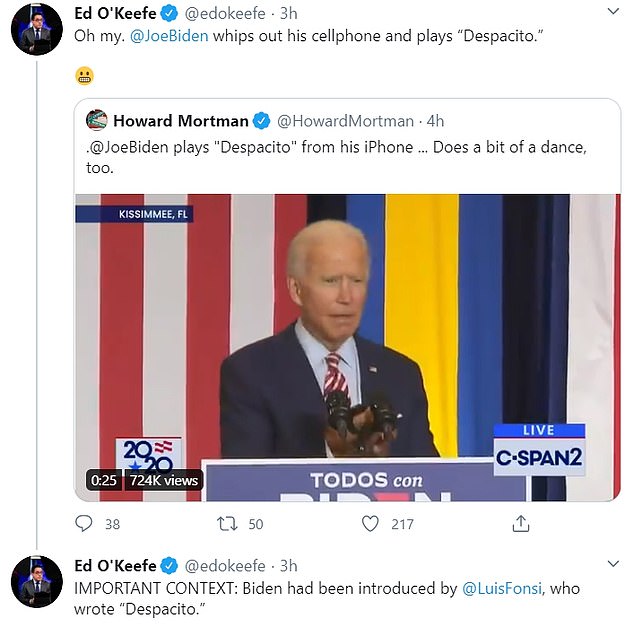 Democrat Hillary Clinton led Trump by a 59 percent to 36 percent margin among Latinos in the same poll in 2016 — and Trump won Florida by about 1 percentage point.

To regain lost ground, Biden made the case on Tuesday that he would be a better president for Hispanics than Trump, touting his commitment to immigration reform and a new plan to support Puerto Rico’s economy.

‘Donald Trump has failed the Hispanic community time and time again, and that’s not a secret,’ Biden said.

‘Whether it’s in his heinous act of separating children from their families at our border, or his repeated attacks on Dreamers, or his neglect of the people of Puerto Rico after Hurricane Maria, or his repeated failures to make sure essential workers have the personal protective equipment they need.’ 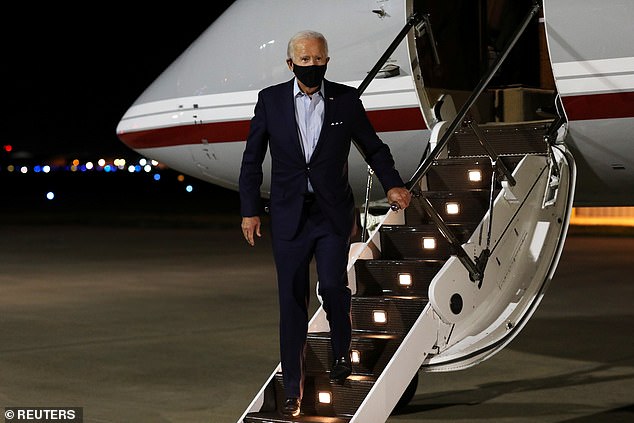 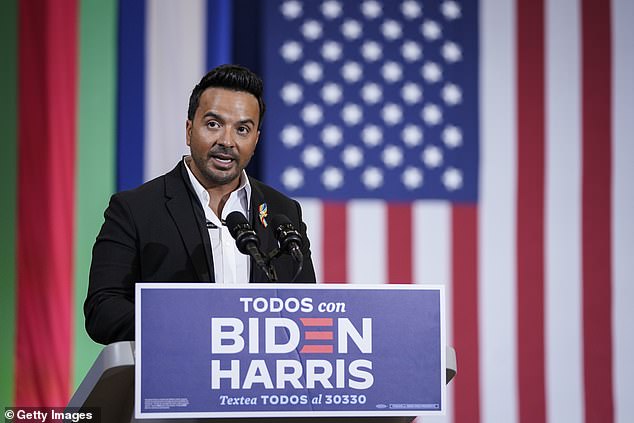 Nationally, little public polling is available to measure the opinions of Latino voters this year and whether they differ from four years ago.

But Democrats are taking no chances.

Billionaire Mike Bloomberg has pledged to spend at least $100million to defeat Trump in Florida.

And by spending his day along what is known as the Interstate 4 corridor in central Florida, Biden is devoting time to one of the most critical regions of the state.

While Republicans typically post big numbers in the northern and southwestern parts of the state and Democrats are strong in coastal cities, campaigns typically battle it out for every vote in central Florida.

Biden’s first event, in Tampa, focused on veterans and was aimed at pushing a potential opening with military voters, who broadly supported Mr Trump in 2016 but are seen as potentially persuadable because of controversial remarks the president reportedly made mocking American war dead as ‘losers’ and ‘suckers’. 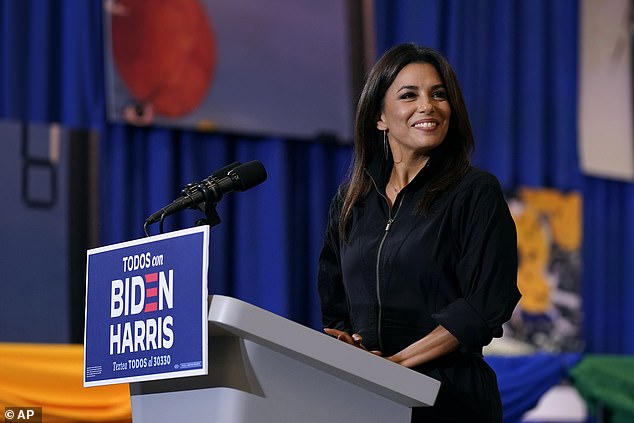 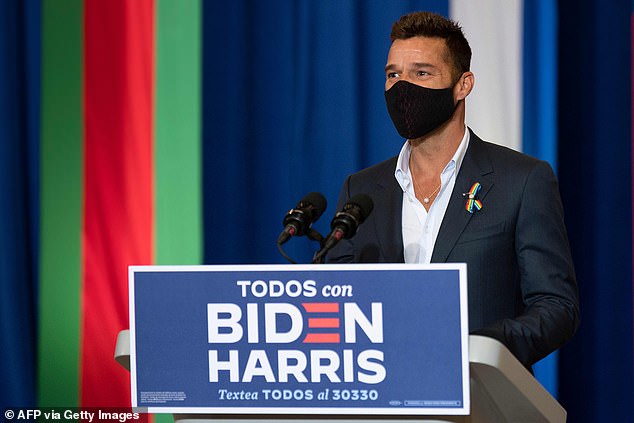 Trump has denied making the remarks, first reported through anonymous sources by The Atlantic, but many of the comments were later confirmed by The Associated Press.

‘Nowhere are his faults more glaring and more offensive, to me at least, than when it comes to his denigration of our service members, veterans, wounded warriors who have fallen,’ Biden said.

Many Puerto Ricans relocated to Florida after Hurricane Maria devastated the island in 2017.