De Blasio had sent out a tweet Saturday asking New Yorkers to continue to stay vigiliant about preventing the spread of COVID-19.

‘It’s a beautiful Saturday, New York City,’ the Democratic mayor wrote. ‘Get out and enjoy it, but don’t forget we’re fighting back against COVID-19. Wear your face covering. Practice social distancing.’ 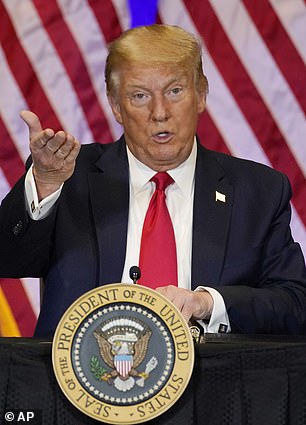 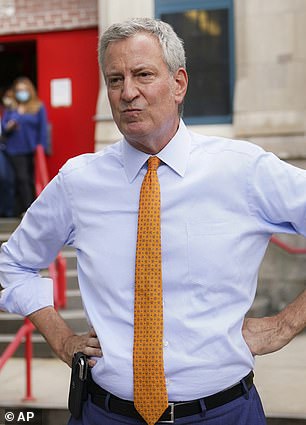 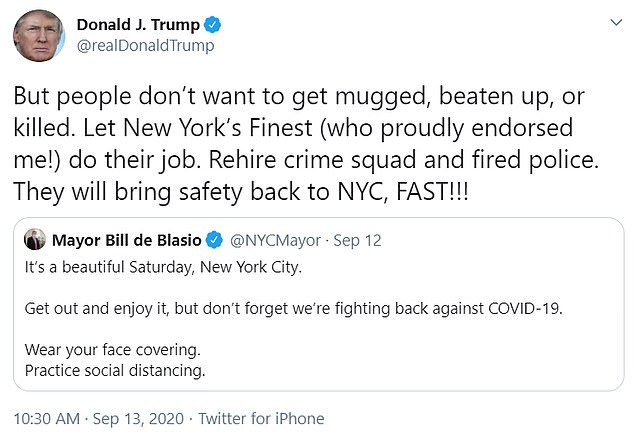 On Sunday, Trump complained about crime in New York City after de Blasio, on Saturday, had wished New Yorkers a ‘beautiful’ day and asked them to wear masks and practice social distancing while they were outside to prevent the spread of COVID-19

Trump responded to the mayor’s tweet Sunday by complaining about the spike in shootings and murders in New York, where the president is from.

‘But people don’t want to get mugged, beaten up, or killed,’ Trump wrote. ‘Let New York’s Finest (who proudly endorsed me!) do their job. Rehire crime squad and fired police.’

‘They will bring safety back to NYC, FAST!!!’ the president added.

Since the killing of George Floyd by a white police officer on Memorial Day, the president and his allies have pushed a ‘blue lives matter’ and ‘law and order’ message.

Trump and Republicans have blasted Democratic city leaders for allowing riots and looting to go on, when Black Lives Matter protests have gotten out of hand.

Former New York City Mayor Rudy Giuliani, Trump’s personal lawyer and a Republican National Convention speaker, warned during the four-day confab in August: ‘Don’t get the Democrats do to America what they have done to New York.’

While The New York Times has reported an uptick in shootings and murders, overall the city’s crime rate is low, the paper said.

‘Rudy Giuliani, who did so much to systematically divide this city and created so much pain, has no validity as someone to speak to this moment in history where people are demanding racial justice,’ the mayor said.

Trump has also gone after de Blasio and New York Gov. Andrew Cuomo for their handling of New York’s reopening, after the city was ravaged by the coronavirus crisis earlier this year.

Cuomo and de Blasio had been reluctant to allow diners inside, jeopardizing New York’s restaurant industry.

‘Donald Trump has absolutely no legitimacy when he talks about the coronavirus. Even his supporters acknowledge his response to COVID has been a failure, and we would be insane to follow his advice,’ Neidhardt said.