Democrats have begun running up a lopsided advantage in early voting as well as absentee ballot requests, in an election what has seen an unprecedented split on voting strategy and furious attacks by the president on mail-voting.

The advantage is pronounced in the battleground states that will decide the election, and that are attracting candidate visits and a TV air war.

The differential in absentee ballot requests has hit three-to-one in Pennsylvania and North Carolina, two states that President Donald Trump won in 2016 that Joe Biden is hoping to strip back.

The advantage in the Keystone state has extended to ballot requests by people who didn’t vote in 2016. A total of 175,000 Democrats who skipped 2016 have asked for ballots, more than double the number of Republicans, Politico reported.

The Democratic lead in ballot requests in Florida – a state Trump carried where Biden is making a run and holding a slight lead in the polls – is 700,000.

A similar dynamic is playing out in Ohio, a state Trump carried that lies just outside the ‘blue wall’ of Michigan, Wisconsin, and Pennsylvania that Democrats are focused on. 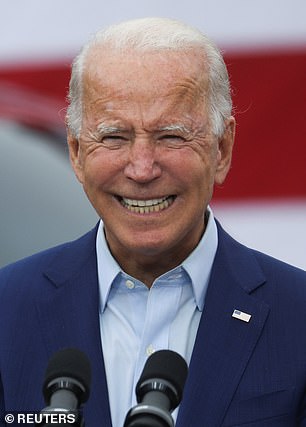 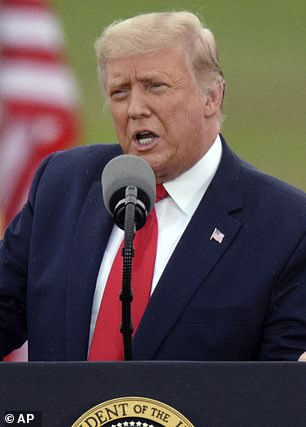 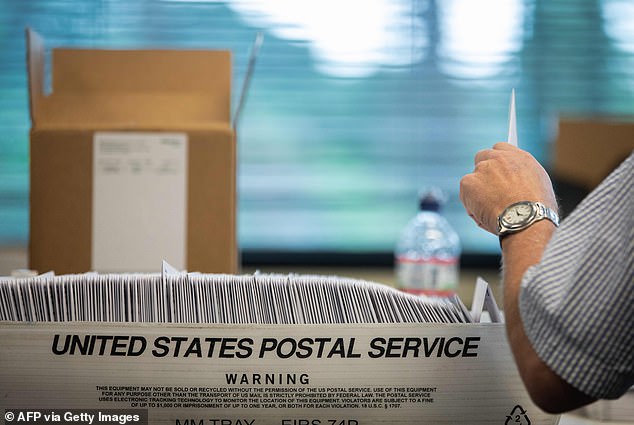 HOW THE STATES LINE UP

The Democratic advantage has carried over to key counties in Ohio, Statehouse News reported.

In strongly Republican Warren County, Republicans and Democrats are running about even in ballot requests. But Republicans accounted for three times as many requests four years ago.

The notable splits come during an election season when President Trump has repeatedly attacked mail-in voting as ‘rife with fraud.’ His campaign is in court seeking to stop mail ballots from going to all Nevada voters.

Trump has said mail voters ‘cheat,’ although evidence of actual mail fraud is rare. He also has attacked the postal service, which is charged with delivering mail-in ballots by election deadlines.

Democrats have been pushing mail voting while also seeking funding for the practice in coronavirus relief legislation. Trump has cast it as a power-play, while party leaders point to the risk of large gatherings with long wait times during a pandemic.

A new Emerson poll in Wisconsin, which gives Biden a seven-point edge, reveals the stark differences in planned voting.

Those planning to vote in person back Trump 61 to 32 per cent. But of the third of voters who plan to vote by mail, Biden leads nearly four-to-one, or 78 per cent to 20 per cent.

The most recent battleground states poll showed Biden is holding leads in six states over President Trump in a new survey taken after party conventions that failed to move the political needle.

The CNBC/Change Research polling released Wednesday shows the Democrat holding a 49 to 45 lead over the president in the six battlegrounds.

Michigan, Pennsylvania, and Wisconsin constitute the ‘blue wall’ that Trump managed to pry from Hillary Clinton in 2016.

Biden’s Pennsylvania lead is four points, 50 to 46, in a state where his edge has been tightening since July.

In Florida, Biden holds a narrow three-point lead, 49 to 46, where an eight point lead in July is now less than a percentage point in the Real Clear Politics average.

Only in Pennsylvania and Wisconsin did Biden hit 50 percent.  Both candidates campaigned in Kenosha last week following violence and protests there, but other surveys have showed Trump’s ‘law and order’ message is not prevailing in the state.

The swing state poll comes as the Trump camp has also shifted its focus to Minnesota, a state he narrowly lost that Democrats have carried since 1972. Under electoral college scenarios Trump could score an electoral college win with Minnesota even while giving up Michigan, Wisconsin, and Pennsylvania. The push comes amid Trump’s push for suburban voters amid social unrest.

A new NBC / Maris poll had Biden leading 53 to 44 in Pennsylvania, the state where Biden was born and held events during an otherwise sparse summer travel schedule.