Put away your woolly jumpers and bring out the sunscreen – as an Indian summer heatwave is set to make parts of Britain warmer than the Bahamas.

Temperatures in southern England could reach 29C (83F) today and rise as high as 31C (88F) by tomorrow.

It compares to a seasonal average daytime temperature of 18C (64F) for England and Wales in September. The Bahamas is currently recording temperatures of 31C (88F).

Met Office spokeswoman Bonnie Diamond said the heatwave is being caused by warm air being drawn north from Spain and Portugal by an area of high pressure.

She said: ‘The warm weather is being drawn north from the Iberian peninsula.’ 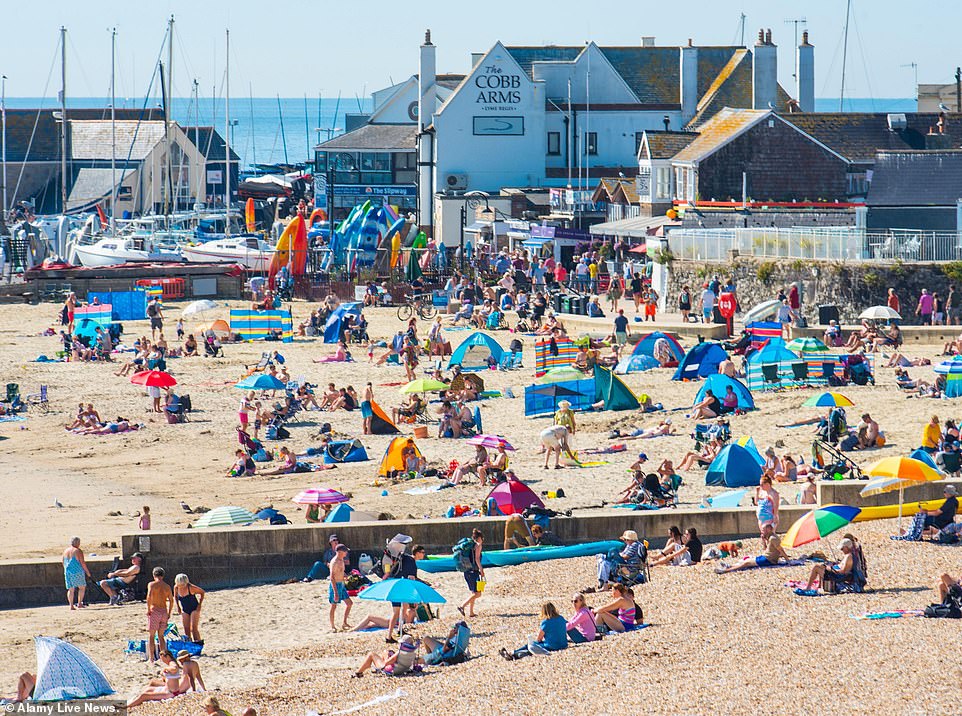 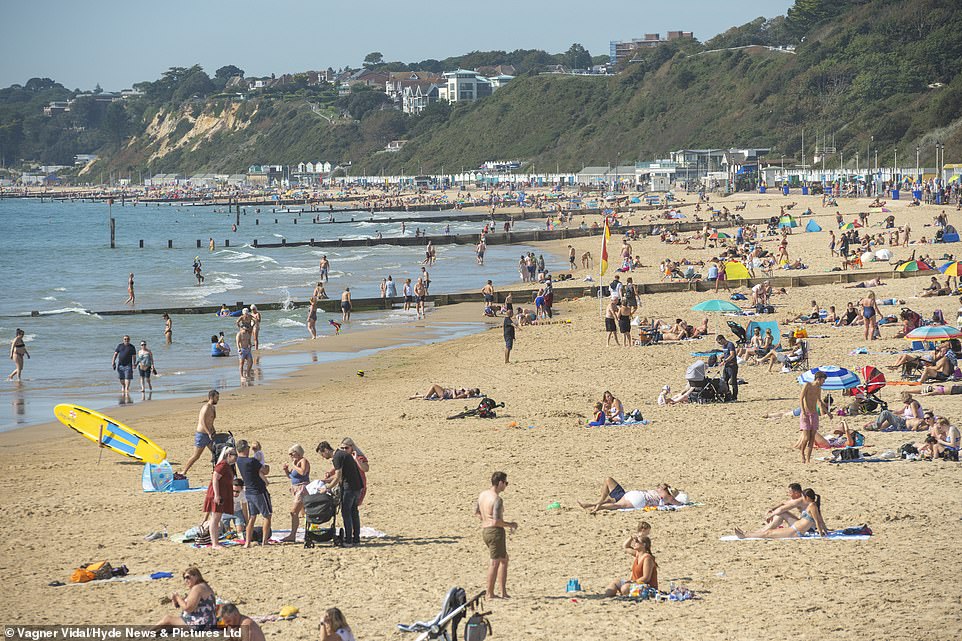 There were similar scenes along Bournemouth’s seafront, as Brits made the most of the unseasonable September sun 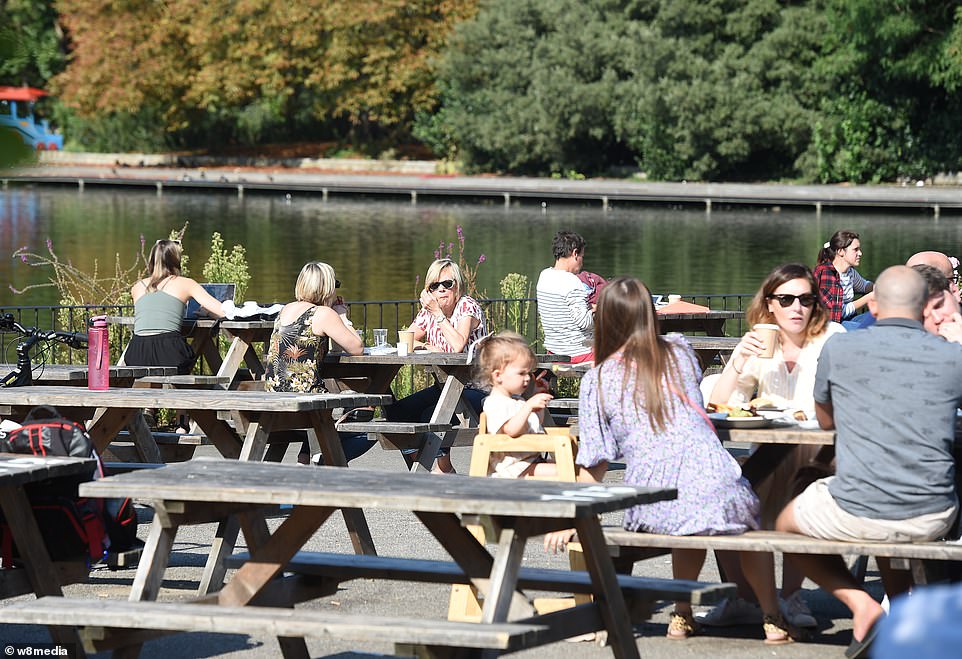 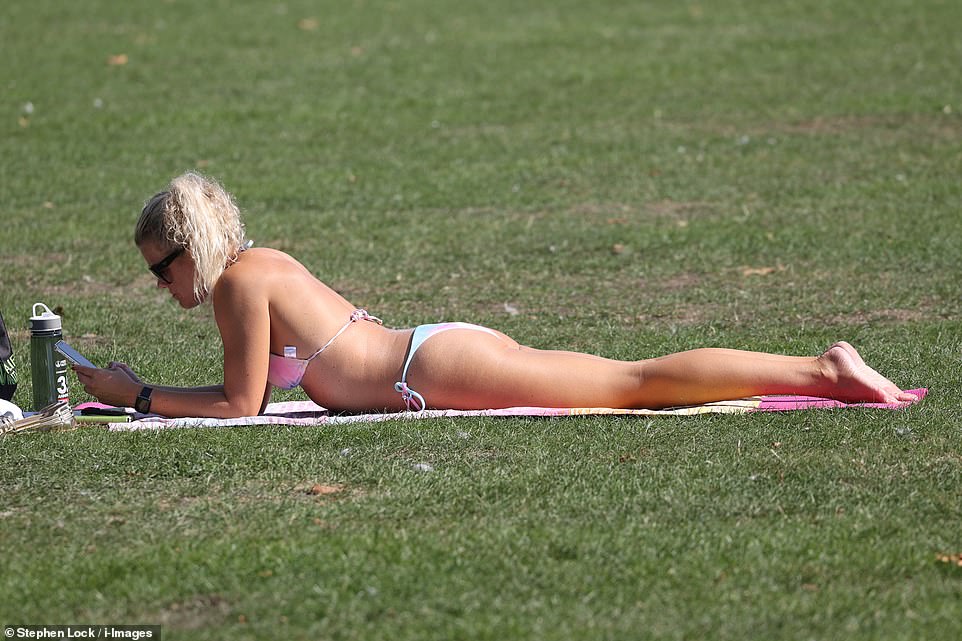 Miss Diamond added the weekend is due to be fine and dry across England and Wales, with temperatures on the rise.

She said: ‘For the start of next week, we are looking at warm air arriving from the continent bringing temperatures into the high 20s, with the highest figures in the south and east but it will be warm, too, for much of the UK.

‘Maximum temperatures of 29C are expected on Monday and on Tuesday we could see, 29, 30 or even 31C.

The figures compare with 29C (83F) forecast for the Bahamas on Monday and Tuesday.

Warm temperatures are expected in Wales, where parts of Snowdonia are predicted to hit 25C (77F), and North East England, where 23C (73F) is forecast for Newcastle-upon-Tyne on Monday. 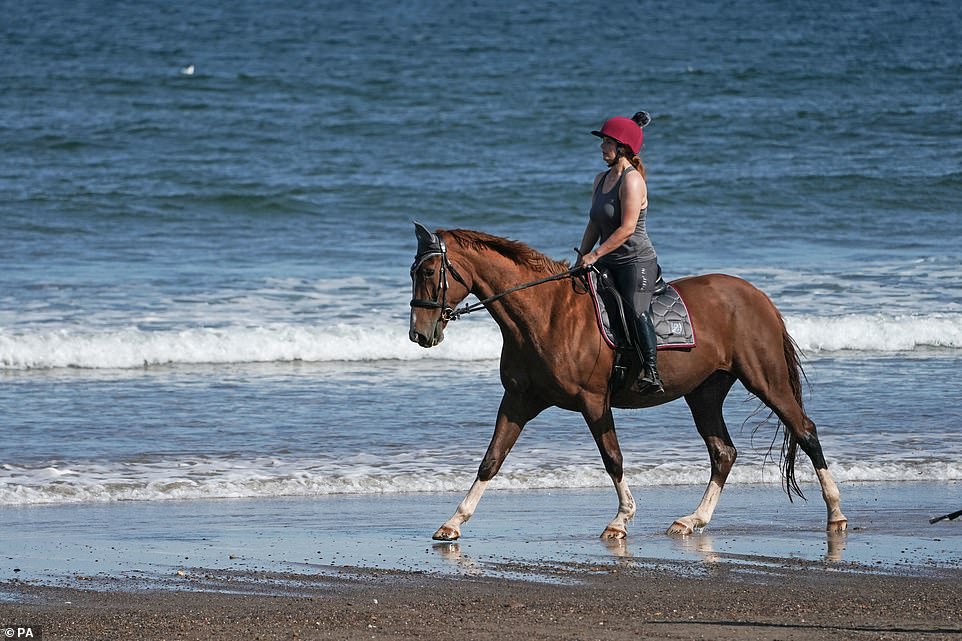 Horse riders took a walk along the shore at Saltburn-by-the-Sea in North Yorkshire on Monday morning, as a September heatwave gets underway 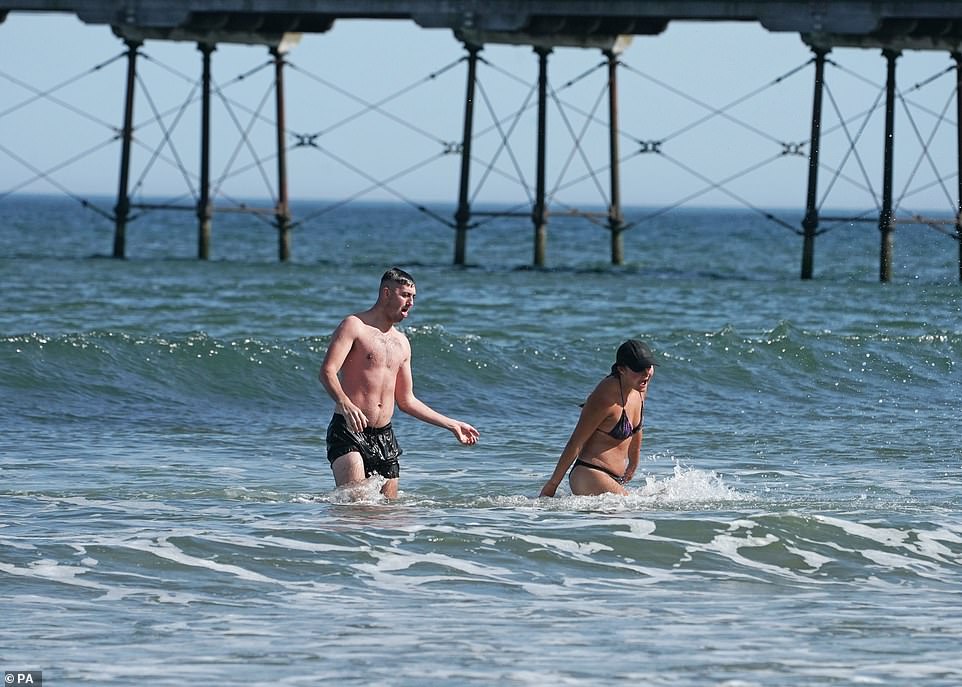 Clear skies and sunshine have been forecast across England today, even in North Yorkshire, where couple took a chance to dip in the sea 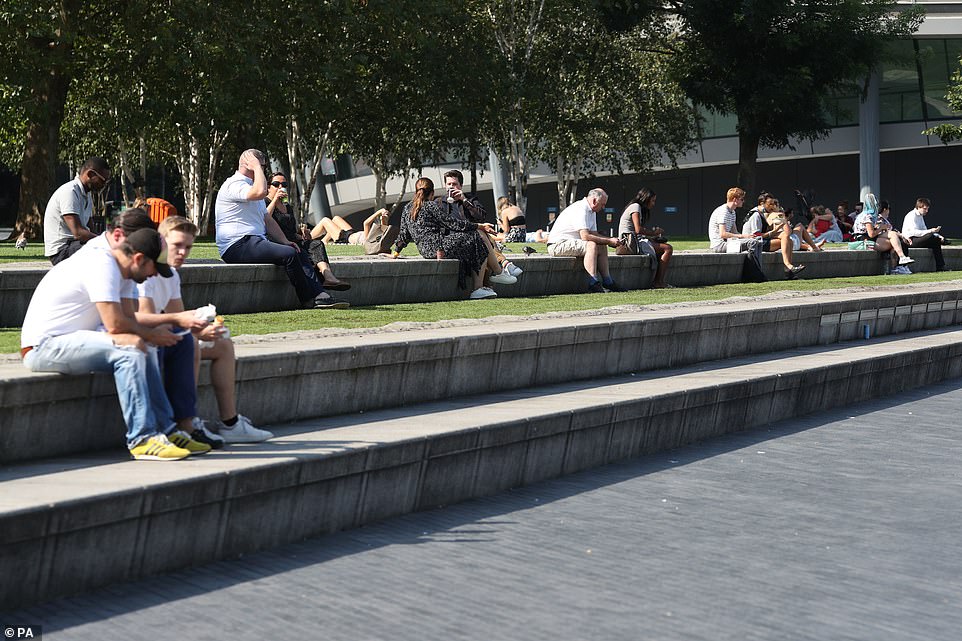 The new Rule of Six Covid-19 restriction comes into effect today, with members of the public still allowed to gather outside, there was plenty of room left for social distancing at Potters Field Park near City Hall in London 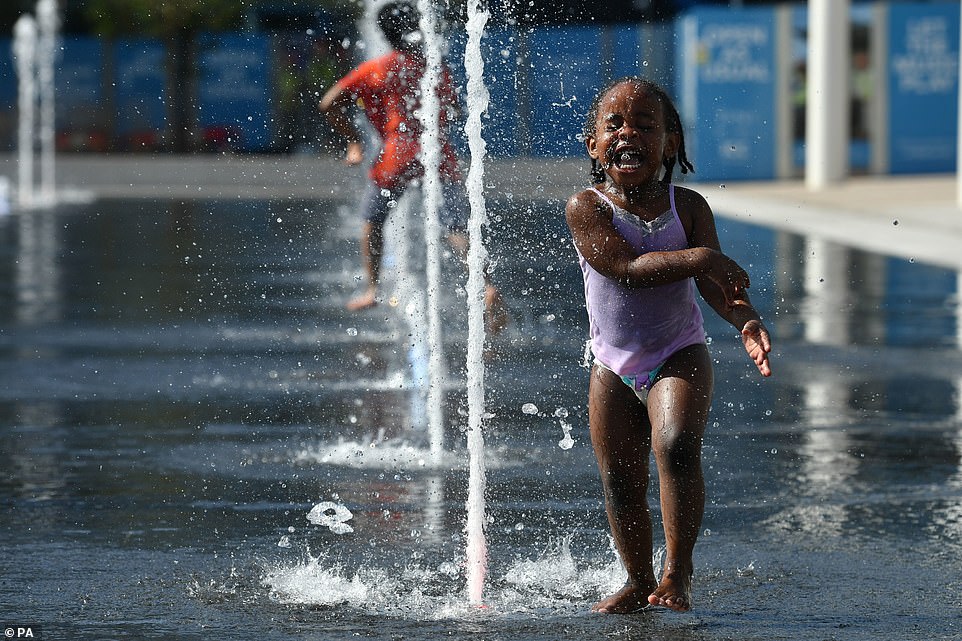 Luna Eddy, two, and her family headed to the water feature at Centenary Square, in Birmingham, to cool off during Monday’s heat. The Met Office said warm weather could last until Wednesday, when thunderstorms may roll in 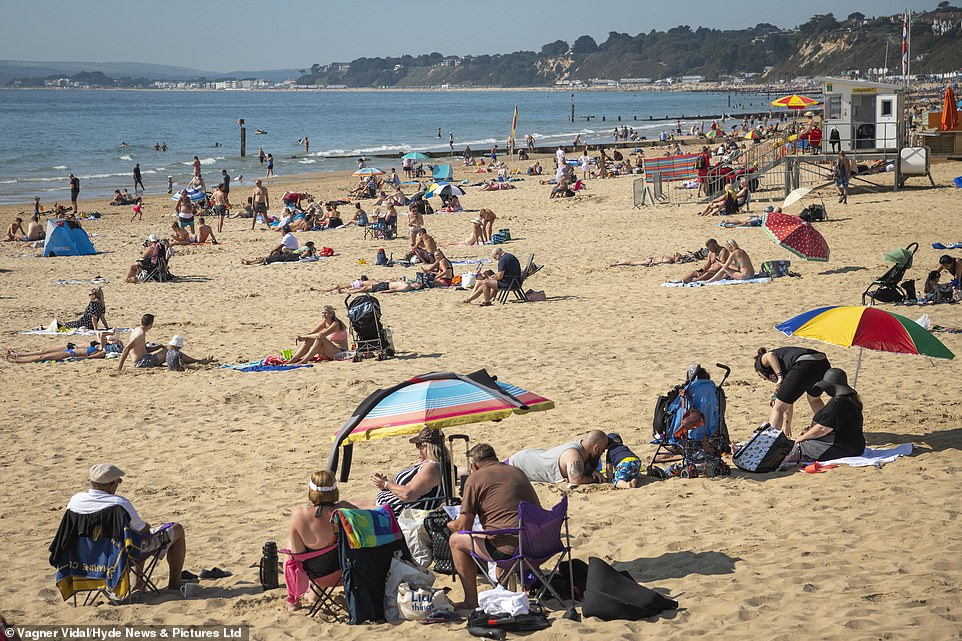 Groups are keeping well apart on Bournemouth beach in Dorset today, with groups appearing to adhere to the new Rule of Six guideline, which prevents seven or more people gathering indoors or outdoors 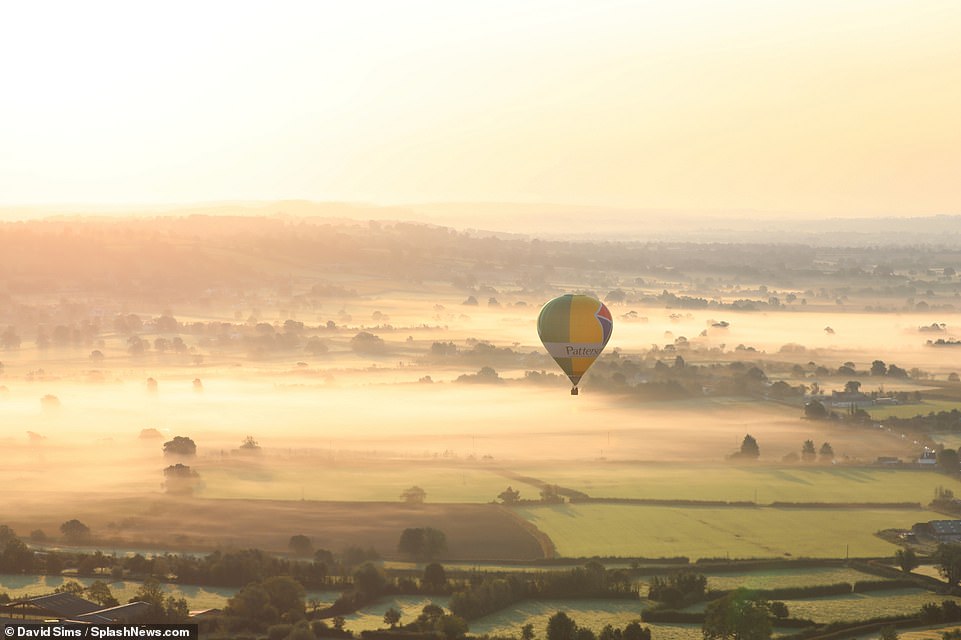 Miss Diamond said the heatwave may break down with thunderstorms on Wednesday as cooler air attempts to move in from the west.

But she added: ‘Warmer weather could stay around for the rest of the week in the southern and eastern half of the country – although what happens further north and west is less certain.’ Miss Diamond said the fine and settled weather in England and Wales contrasted sharply with Scotland, where a washout weekend is expected.

‘It’s going to be nice everywhere except Scotland, where we are expecting up to a month’s rain to fall,’ she said.

In its longer-range forecast for the rest of the week and into the following week, the Met Office said: ‘Beyond midweek it is uncertain how long this spell of settled conditions will continue for.

‘There is a broad signal for the potential return of more unsettled and changeable conditions to extend across western and in particular south-western areas. 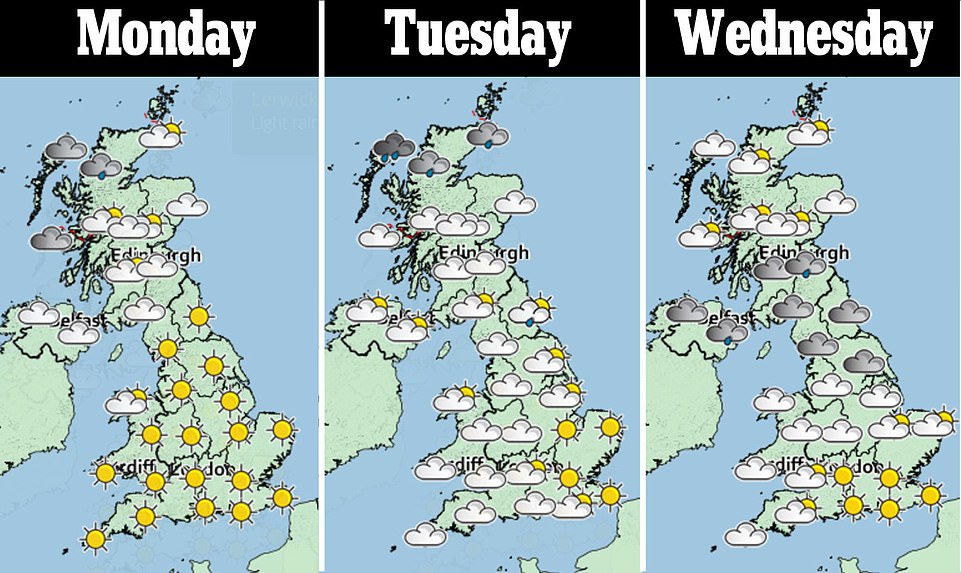 The south east of the UK looks to be set for glorious sunshine for the next week, while the north is predicted rain 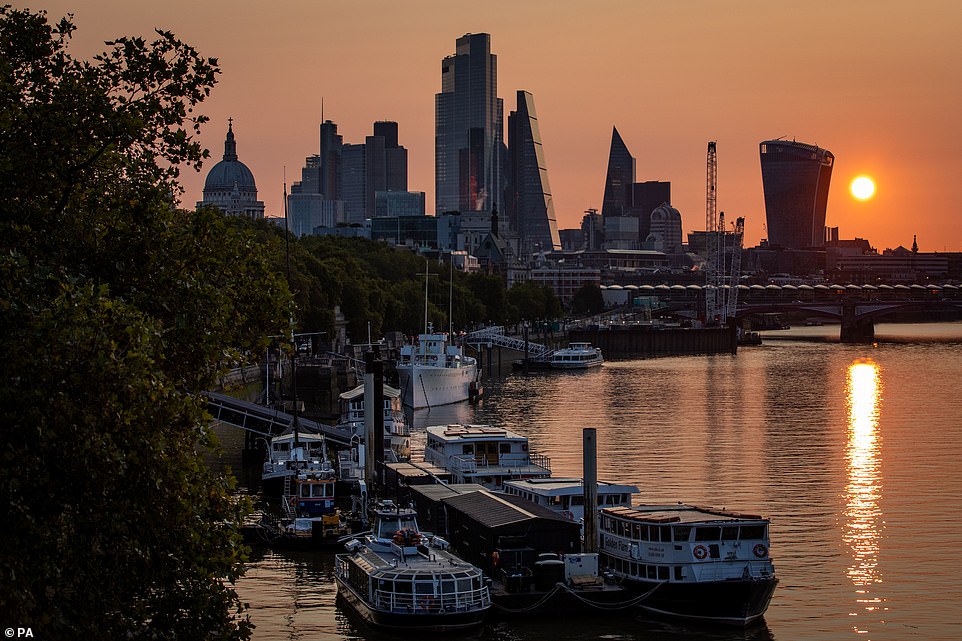 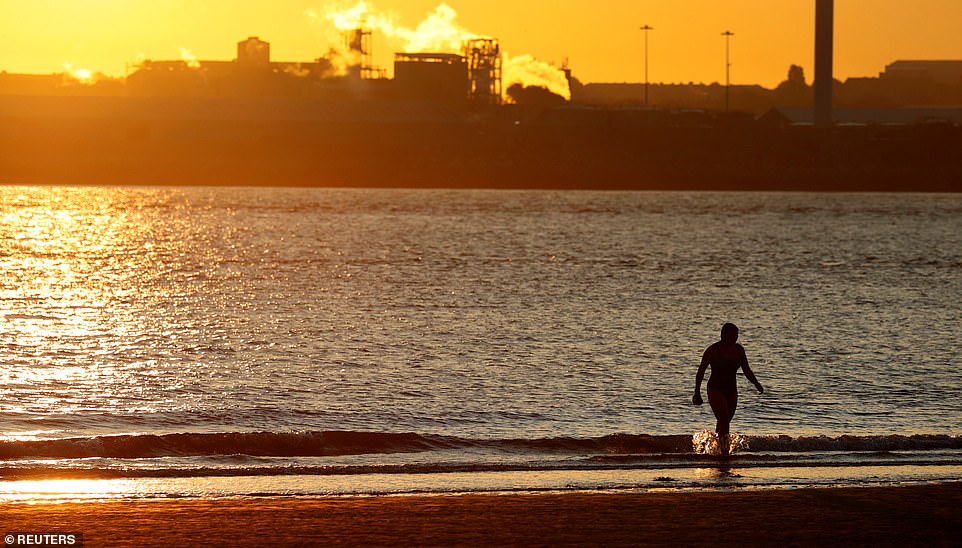 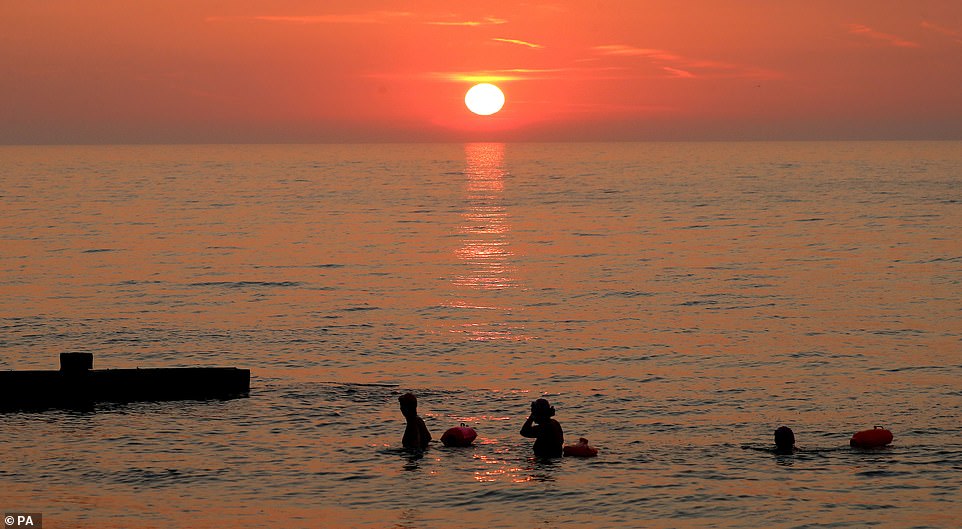 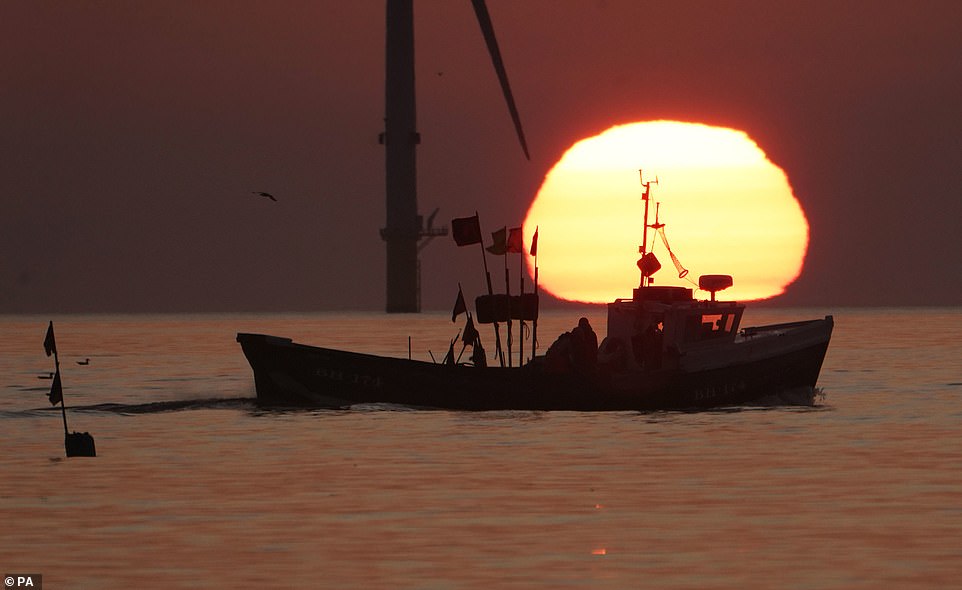 ‘Conditions may remain more settled across eastern and in particular north-eastern areas, albeit with temperatures falling closer to average here.’

The fine and sunny forecast follows an unsettled end to the summer with two named storms, Ellen and Francis, and one of the coldest August bank holiday weekends on record.

The hot weather comes as rules on socialising are tightened across England in a bid to halt the growing numbers of coronavirus cases.

From Monday, it will be illegal to meet in groups of more than six people with the threat of fines for anyone found flouting the law.

The new rules apply both inside and outside, meaning that large groups in parks will be banned from meeting together in the heat.

The September heat follows on from an August heatwave which saw temperatures top out at 34C for six days running last month.