The flashy young owners of a new Sydney restaurant that features a lavish $4 million interior have been accused of not paying staff – for the second time.

Julia Rose Gelonese, 25, and her boyfriend Ussi Monix Da Silva, 27, are already facing action in the Federal Court over allegations they failed to pay staff at their restaurant Upper East Side in Bondi, in Sydney’s east.

The couple were taken to court after an investigation by the Fair Work Ombudsman.

Fair Work alleged that Upper East Side staff – many of whom were on working holiday or student visas – had been underpaid or in some cases received no payment at all.

The court action is still ongoing.

There are now similar claims from workers at their new CBD venue Meu Jardim – where Mr Da Silva boasted about spending $4.1 million on a fit out that includes a firepit and waterfall.

According to ASIC documents Ms Gelonese took over from her boyfriend as director of Upper East Side in 2019, while Mr Da Silva controls Meu Jardim.

But both restaurants share the same registered business address according to ASIC. 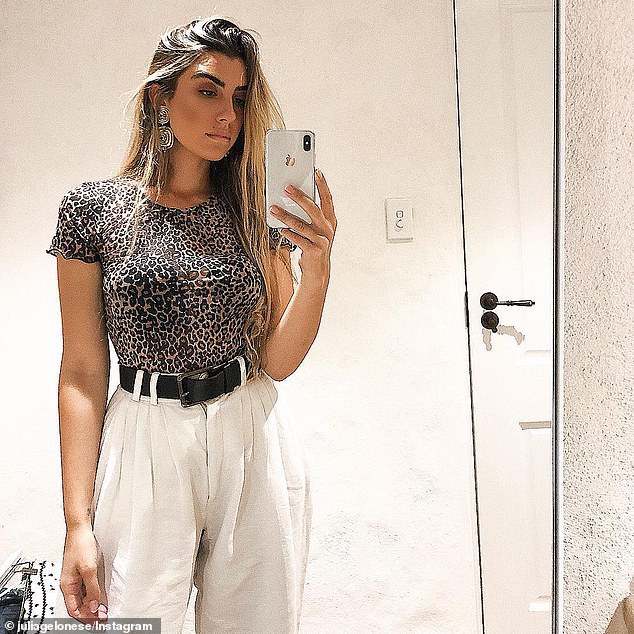 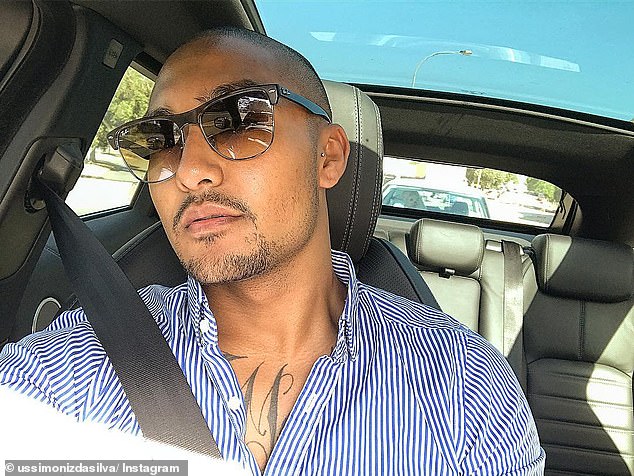 But despite allegedly struggling to pay staff, Ms Gelonese and Mr Da Silva (pictured) somehow had the finances to open up a new venue Meu Jardim – and boasted to media about a $4.1 million fit out that includes a firepit and waterfall

‘I like to create things that shock the system. You’re surrounded by brickwork in the laneway and then you come inside and bang – you’re in a glacier cave,’ Mr Da Silva told Broadsheet earlier this year.

‘We’re changing the mould… when you come in its like a futuristic oasis.’

Daily Mail Australia can reveal that within just months of opening, staff at Meu Jardim were chasing management for their wages, with many claiming they are still owed superannuation.

Matteo Pellegrino began working at Meu Jardim in January as the restaurant geared up for its grand opening.

The 28-year-old was hired as a supervisor and was initially impressed by the venue, but his attitude quickly changed when he was not paid on time – forcing him to take out a bank loan just to pay his bills.

‘We found out after we had been employed and had been working with them for a while that they had not been paying people over there at the Bondi venue’, Mr Pellegrino said.

‘By the time it opened we’d already got every single one of our pays late. They kept assuring us that once they were opened, once they had revenue: “We’re going to be fine to pay you”.

‘But even still, weeks after we opened they were paying us late.

‘We were meant to be getting paid weekly but it was really once or twice a month, on different dates, and there was just no consistency to it.

Mr Pellegrino said Ms Gelonese and Mr Da Silva would come into the restaurant on a few occasions each week, but barely engaged with staff.

He said the couple seemed more interested in their lavish ‘Instagram lifestyle’ than they were in running a successful business.

‘I just got the impression that they just wanted to have an Instagram lifestyle and thought that maybe by opening a fancy restaurant they could do that,’ Mr Pellegrino said.

‘There was this guy that they said was a secret investor. He was funding the whole thing essentially, I’m not sure why.’ 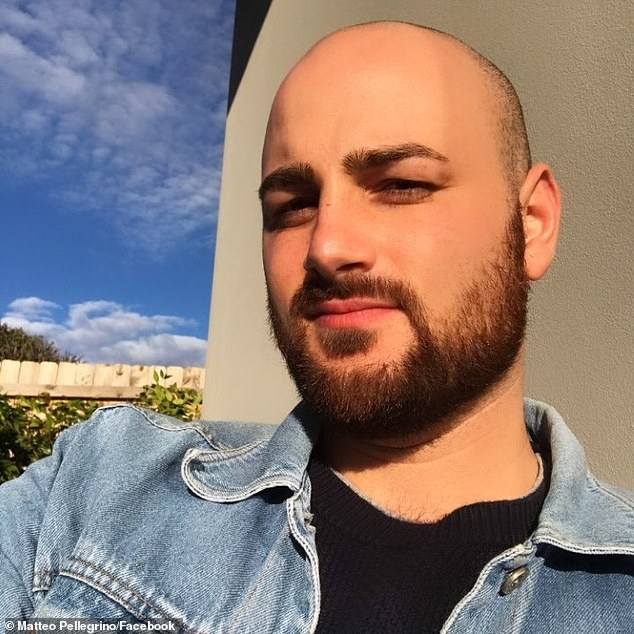 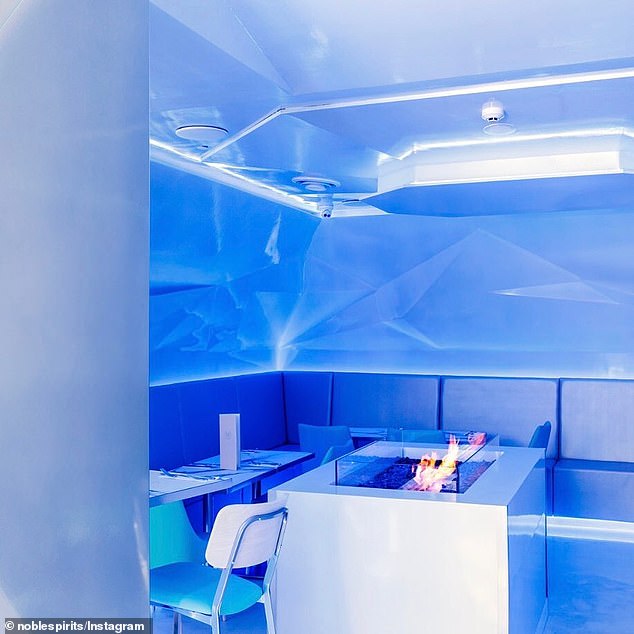 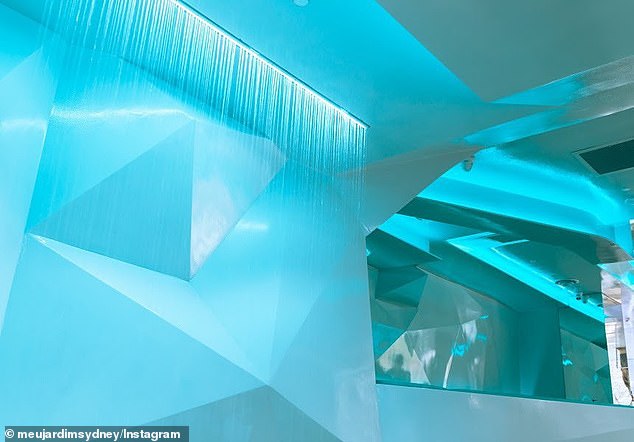 Intended to look like a glacier, the venue cost $4.1 million to fit out and includes a waterfall and firepit

Other staff members who worked at Meu Jardim had similar experiences.

One man, who did not want to be named, said he was also consistently paid late.

‘The first time I had concerns was when the first payslip didn’t arrive in the first week of March,’ the bar worker said.

‘The funds for payslip one were never actually paid into my nominated bank account until the 16th of March.

‘Pre-COVID, Ussi and Julia both frequented the venue quite often, especially around opening night in February. Ussi was in almost every weekend.

‘Every night Ussi was in, he would ask for rounds of shots, which we were directed to charge to the business.

‘They were definitely living the lavish lifestyle while in the venue. Post-COVID, I never saw Julia at the venue but Ussi still came in fairly regularly.’

A former staff member at the couple’s other restaurant Upper East Side shared text messages showing just how employees were strung along.

I just couldn’t believe this situation happened in Australia…

Esty Reyes was told by Ms Gelonese that her wage would be in her bank balance ‘by Friday’ – February 21.

On several occasions in the weeks that followed, the businesswoman claimed she would send Ms Reyes a ‘payslip’ by the end of the day.

But when money had not arrived by March 25 – more than a month later – Ms Gelonese finally admitted there was a problem.

‘Right now there’s no revenue coming in so it’s extremely hard to finalise anything at this present time,’ her text read.

‘As mentioned, I’m waiting for some funds to come in so I can finalise.’

Ms Gelonese next told Ms Reyes the money would be in her bank account by April 6.

But it was not until July – five months after she was first due to be paid – that the bank transaction finally went through.

By this stage COVID-19 restrictions had forced the lockdown of many businesses and left Ms Reyes out of work and out of money.

‘I tried to be patient, but then everything closed and I was trying to survive,’ she said.

‘I offered (for them) to even only pay me half. They finally paid me five months late at which point I was already in Mexico and only after I raised my voice.

‘I just couldn’t believe this situation happened in Australia.’ 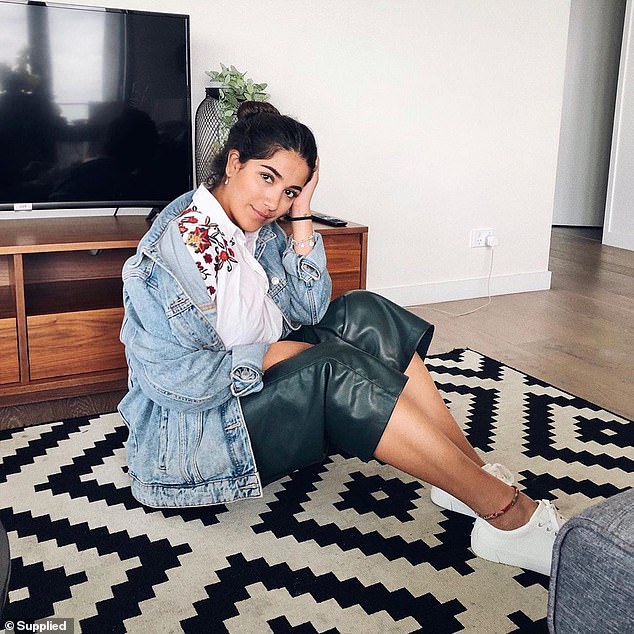 Esty Reyes, a former employee at Upper East Side, said she was not paid on time 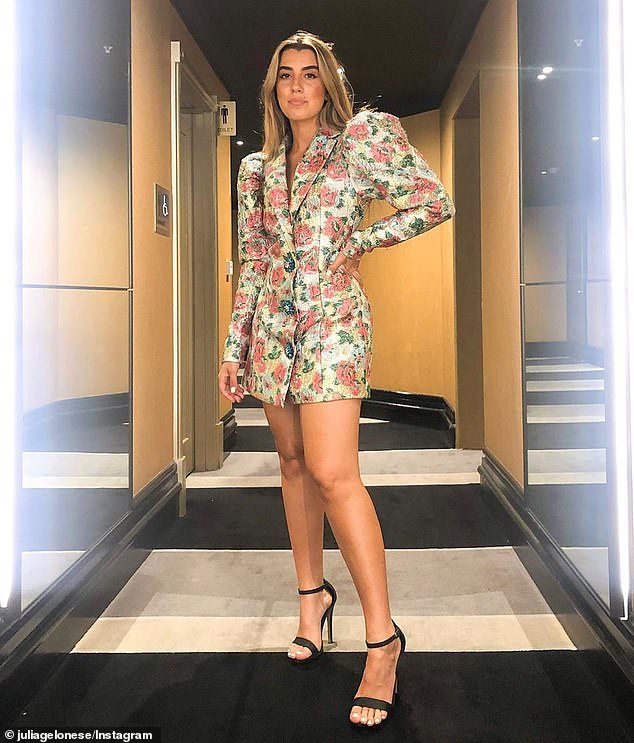 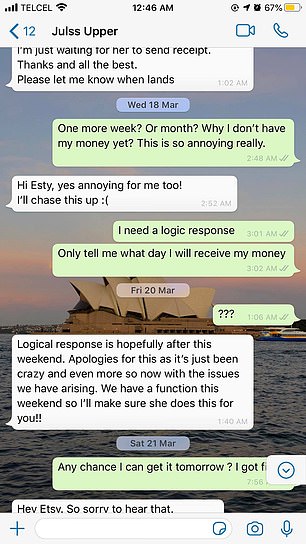 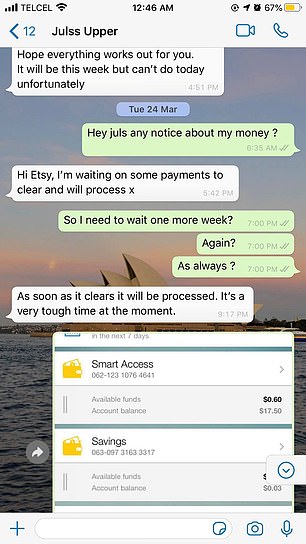 After complaints by several Upper East Side staff members, the Ombudsman began an investigation and found they had likely breached 11 areas of the restaurant award and two of the national employment standards.

When Ms Gelonese did not meet the Fair Work Ombudsman’s compliance deadline, the case was taken before the Federal Court.

In a statement, Sandra Parker of the Fair Work Ombudsman said that in the wake of major cases of underpayment by celebrity chefs including George Colambaris and Neil Perry, they were ‘cracking down’ on the hospitality industry.

‘Under the Fair Work Act, inspectors can issue a Compliance Notice if they form a belief that an employer has breached certain workplace laws,’ Ms Parker said.

‘Where employers do not comply with our notices, a court can order them to pay penalties in addition to back-paying any affected employees.

‘The Fair Work Ombudsman is cracking down on alleged underpayments in the fast food, restaurant and café sector, particularly when it involves migrant workers.’

Wage theft was last week criminalised in Queensland, which followed Victoria’s lead from earlier this year, however New South Wales is yet to do the same.

Karma Lord, director of Hospo Voice the hospitality arm of the United Workers Union, slammed the restaurant she called an ‘Instagram playground for rich and famous’.

‘What does it say about the NSW hospitality industry that an employer who doesn’t pay its workers at one venue, who has been prosecuted by the Ombudsman for wage theft, can go on to spend millions opening another sumptuous venue?’ she said. 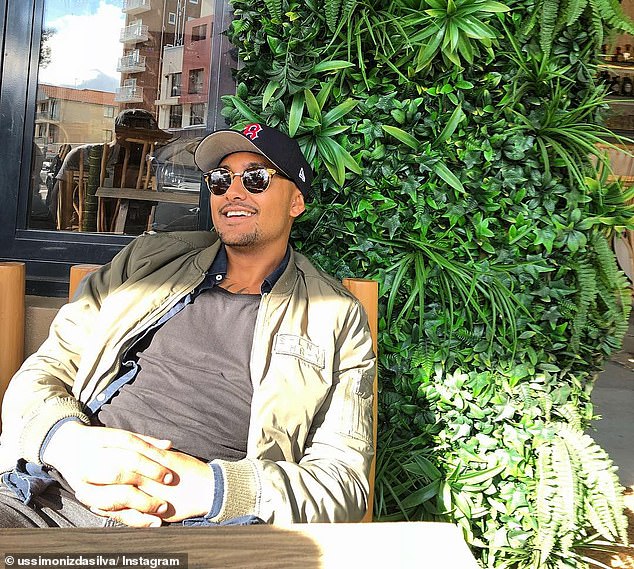 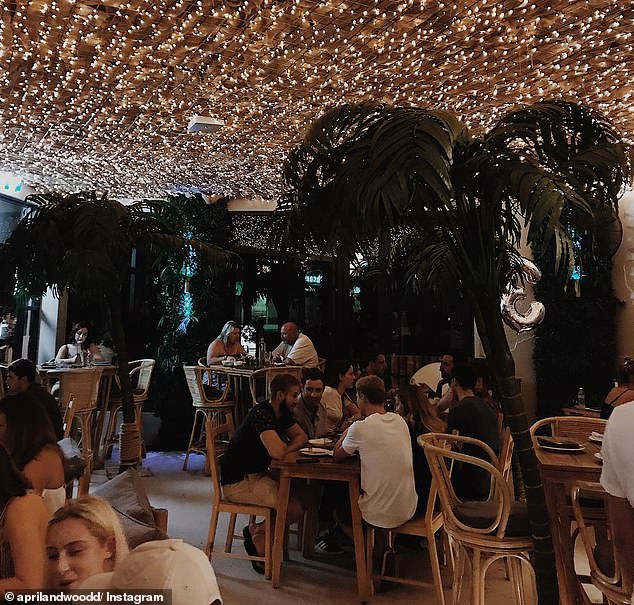 Much like its sister venue in the city, Upper East Side is decked out in style with thousands of fairylights covering the roof 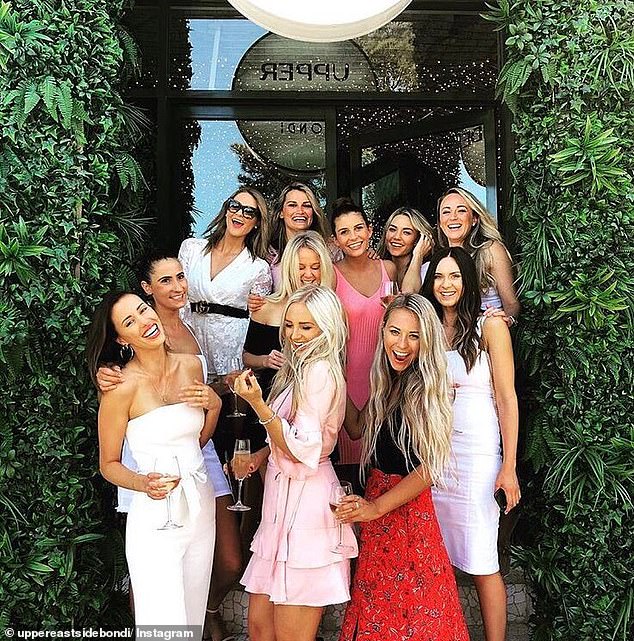 Since opening in 2017 the bar has become popular among reality TV stars such as Sam Frost (back row, second from right)

‘Workers shared with us the horror and anxiety of working in this Instagram playground for the rich and famous, while going months without being paid and having to beg for their wages.’

Ms Gelonese claimed that despite the two businesses sharing a registered address, she was only affiliated with Upper East Side – not Meu Jardim.

Upper East Side had previously been taken to court for running up massive debts of more than $95,000 to businesses who had provided food, alcohol and services.

One outstanding bill from a labour hire company was for $36,745 to JRM Hospitality. 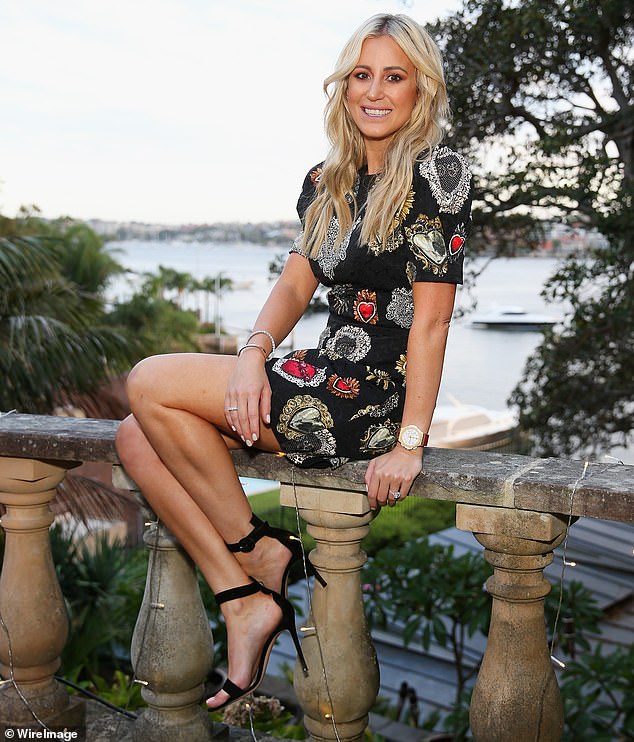 Roxy Jacenko (pictured) and her firm PR Sweaty Betty provided services for Upper East Side worth $10,102

It was understood JRM was engaged by the bar to employ staff after a number of chefs and other staff walked off the job suddenly in mid-2017.

Ms Gelonese has previously told Daily Mail Australia that all payments to her employees at Upper East Side had now been ‘finalised’.

In addition to paying her staff, Ms Gelonese claimed the debts owed to a number of businesses had also been settled.

The pandemic has caused major disruption for many restaurants and bars, with many unable to open and forced to close because of government lockdowns.