Former Ben & Jerry’s CEO Perry Odak has put his Colorado mansion – which has a swimming pool in its foyer – on the market for $5.5million.

The eight bedroom, 10 bathroom mansion sits on 35 acres of land and is surrounded by 20,000 acres of permanent open space.

‘That quiet and serenity was a real plus for me, because when you’re running a company and you see people all day long, you want to escape,’ Odak told Bloomberg. 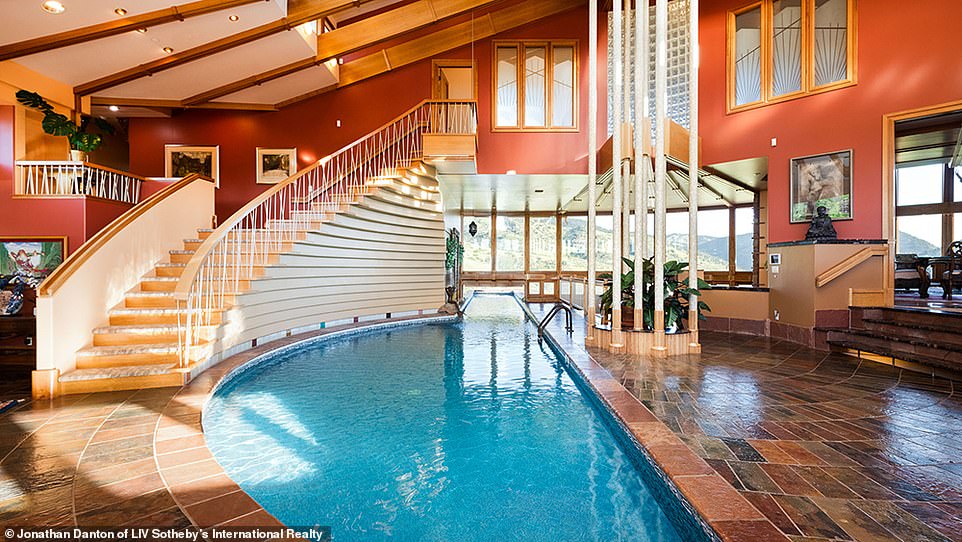 Former Ben & Jerry’s CEO Perry Odak has put his 35-acre Colorado estate – including a home with a foyer swimming pool (pictured) – on the market for $5.5million. The home is 15-minutes from Boulder and 25-minutes from Denver 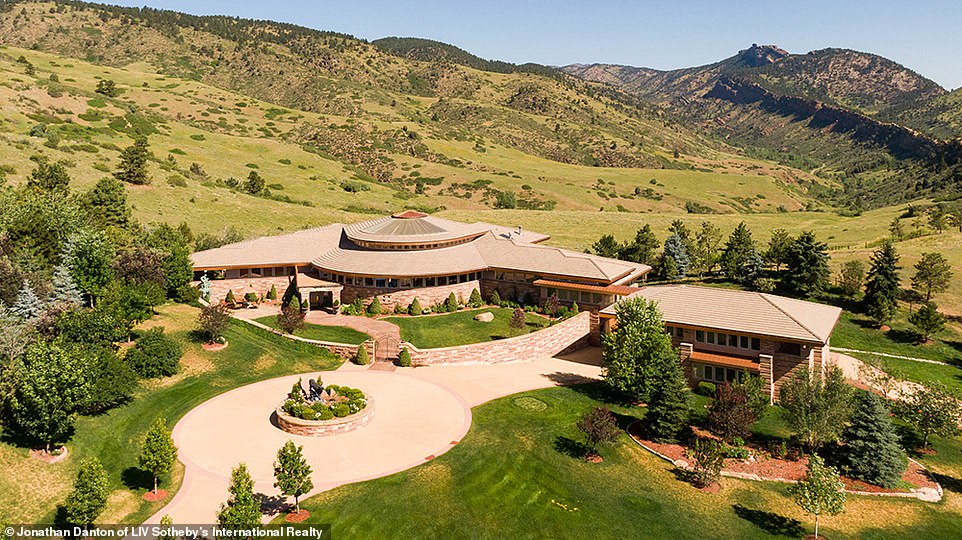 The estate is surrounded by 20,000 acres of conserved space that wild animals – including antelope and bears – roam on

Among the benefits of being surrounded by so much wild land is that nature is right outside the door, in the form of antelope, elk, deer, coyote and bear sightings.

Odak kept the amount of renovations to a minimum after moving in to the home with his family. 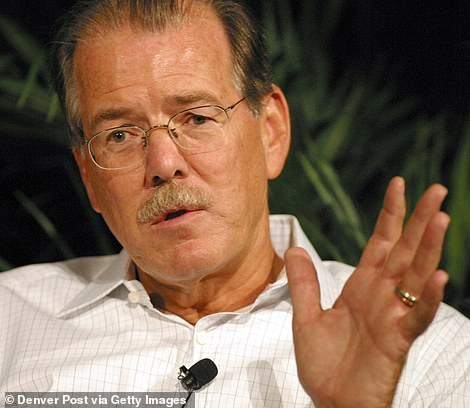 Odak (pictured in 2003) bought the home in March 2001 and lived there with his family. He said he is now selling it to ‘downsize’ as he spends most of his time in California now and owns two homes in that state, too

Among the scant changes were switching the existing media room to a gym and adding a temperature-controlled wine cellar that can hold 2,000 bottles. He also had the pool’s depth deepened.

In the nearly 20 years since he bought the place, Odak said that he had put the house on the market a few times, but then taken it off because ‘I don’t need to sell the house, so I’m not going to give it away.’

Now, Odak – who also has two homes in Southern California, where he spends most of his time – has decided to sell the house because he’s ‘just downsizing’ and doesn’t ‘need the headaches’ of owning three pads.

One of the home’s most outlandish features – the pool – is also the one that Odak credits with keeping the home’s many wood details in good shape.

Odak said that despite being 20 years old, ‘there’s not a crack anywhere’ in all that wood, unusual considering how dry Boulder’s climate is.

He said the foyer pool acts as ‘a source of humidity’ and noted that ‘In most houses in Colorado, the wood dries up.’ 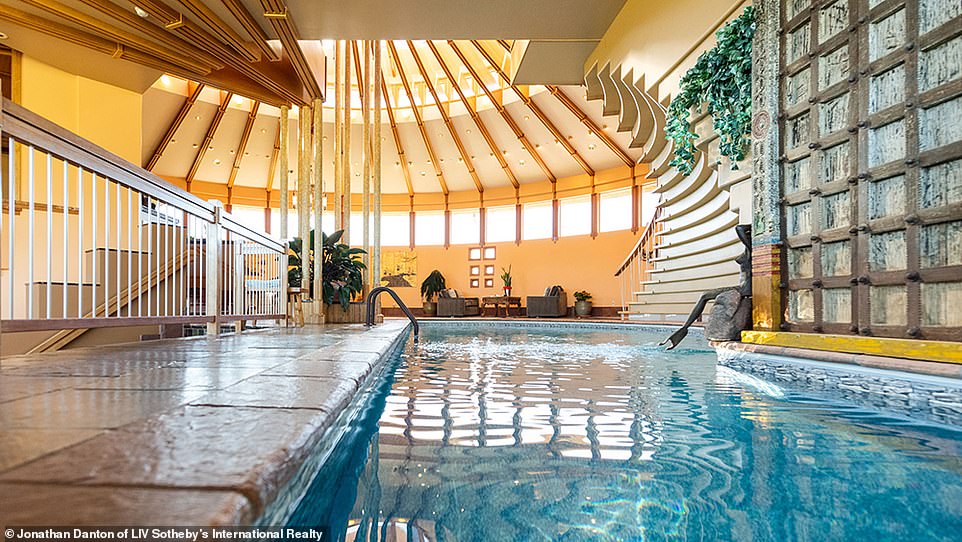 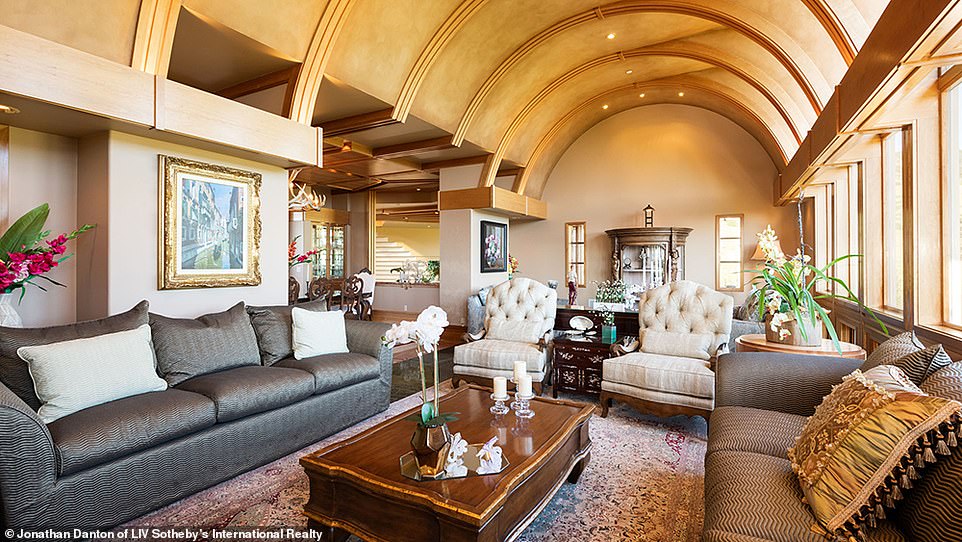 The 14,000-square-foot home has eight bedrooms, a living room, gym, wine cellar and dining room among its features 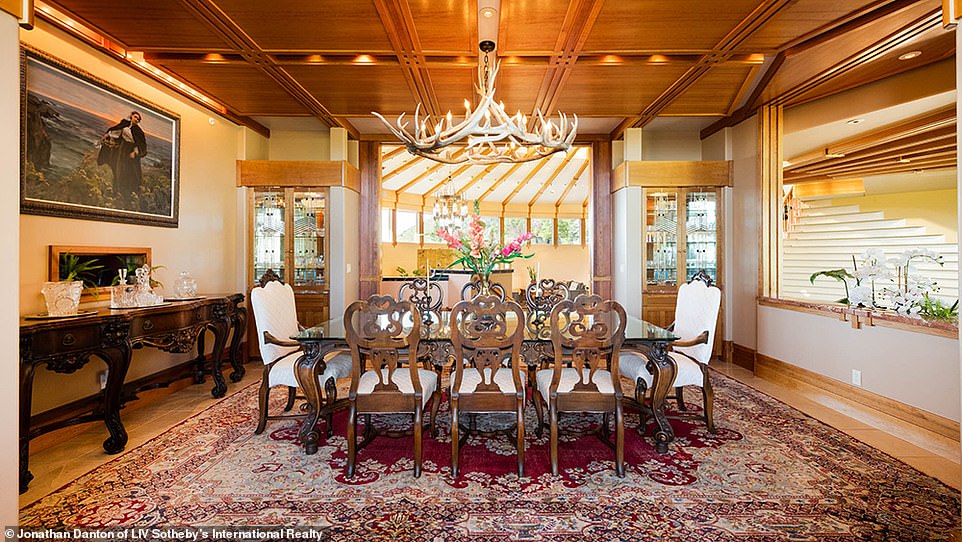 The dining room features multiple examples of the home’s furniture-grade woodwork. The home was built by a local contractor, who sold it while he was going through a divorce 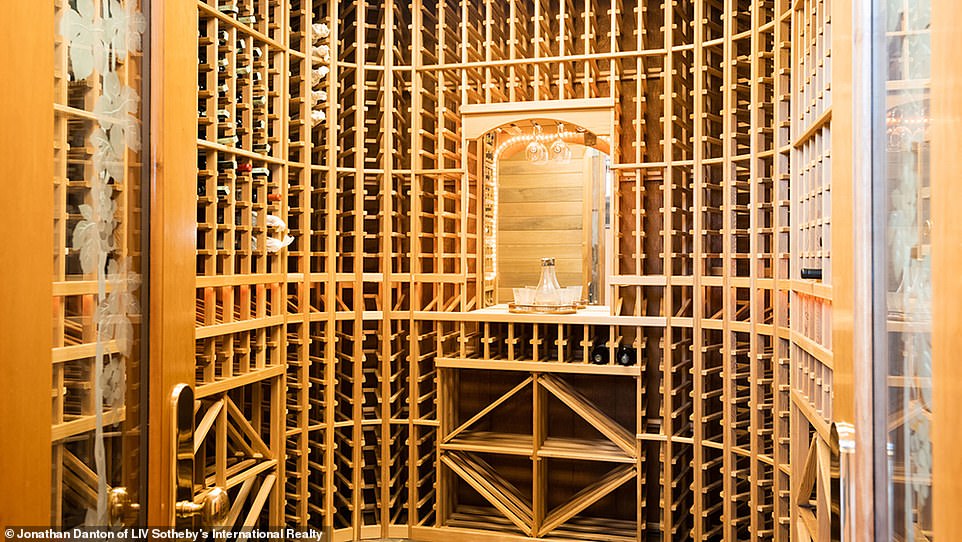 Odak kept his renovations to a minimum after buying the home, but did a 2,000-bottle, temperature-controlled  wine cellar 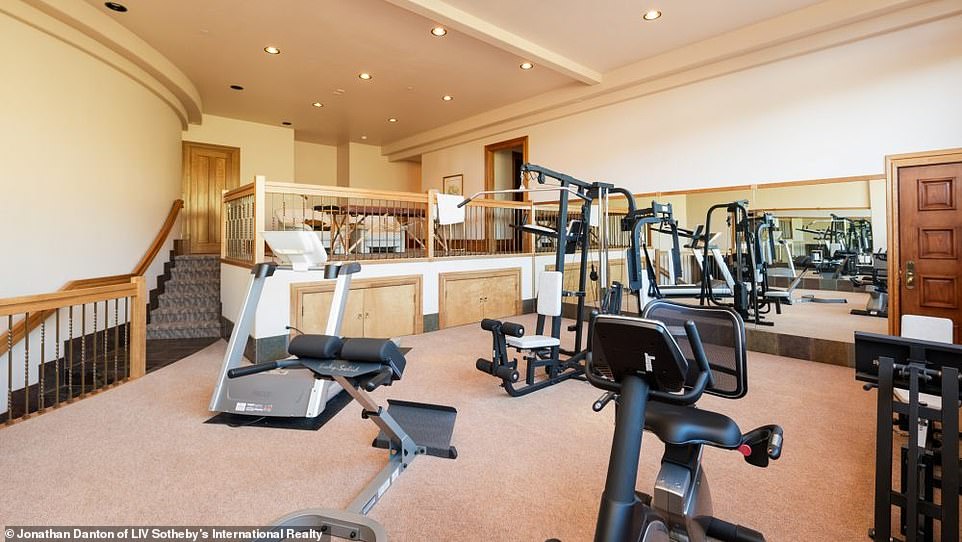 The pool, it turns out, is actually an indoor-outdoor one.

‘You push a button, and a wall opens up and you can swim out,’ he said, estimating the inside portion of the pool to be about 75 feet long, ‘so you swim indoors in winter—and in the summer, you open it up and go outside.’

Aside from the front-and-center pool, the house also has more traditional elements, like a large kitchen, family room, dining room, two master bedroom suites and four additional bedrooms, including one for staff to use.

Another feature is a two-bedroom guest house – complete with kitchen, bathroom and living room – which is connect to the main house via overpass.

‘I’ve had people stay there for some time, and you’d never know they were staying in the house,’ told the news site. 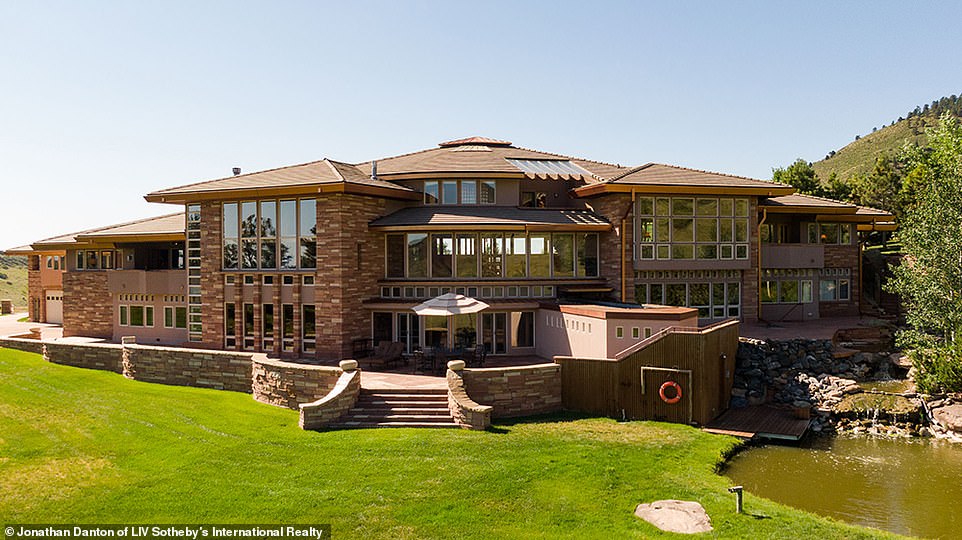 The home has three million pounds of stonework on it exterior. It also has a guest house attached to it, accessible via overpass 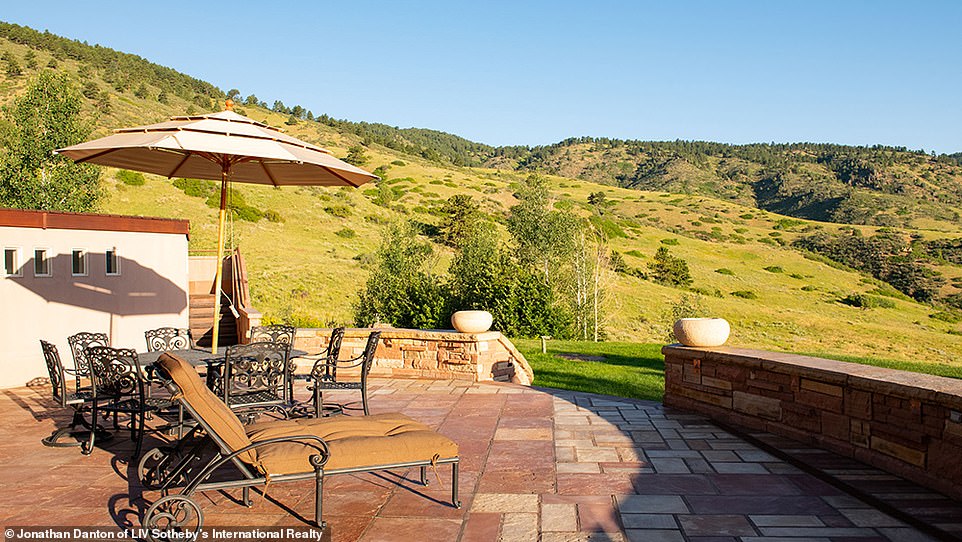 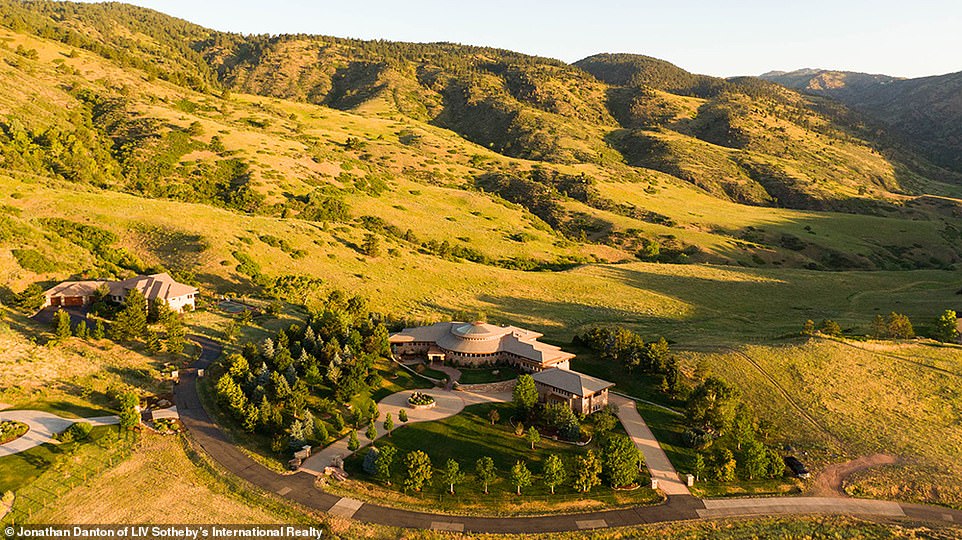 Odak’s 35-acre property is pictured from above, showing how isolated it is, surrounded by the conserved open space

The home’s exterior areas include three million pounds of stonework.

The home itself was built by a local contractor who got a divorce before he could finish it, Odak said.

Odak told Bloomberg that even though he didn’t think the midst of a pandemic was the ideal moment to be selling an expensive home, he said he had ‘a lot of realtor friends who tell me they’ve had some of the best months they’d ever had, as people escape cities.’

He said that the home will likely appeal to ‘an executive who wants to get out of the city and out of the chaos—but be close enough to Boulder and Denver’ to still be able to commute there.

Boulder is a 15-minute drive, while Denver is 25 minutes away.