Knife-wielding bikie flew into an uncontrollable rage after being locked out of his girlfriend’s home moments before police shot him dead, inquest hears

An outlaw motorcycle gang associate flew into an uncontrolled rage after being locked out of his girlfriend’s Brisbane family home moments before being fatally shot by police.

Liam Scorsese was shot in February 2018, after refusing to surrender a knife taken from the family home of his girlfriend Chireez Beytell, an inquest into his death was told on Wednesday.

Ms Beytell’s mother Madelene Erasmus sobbed hysterically as she recalled Mr Scorsese ‘became a different person’ after he was locked out of their home after a loud confrontation with his girlfriend. 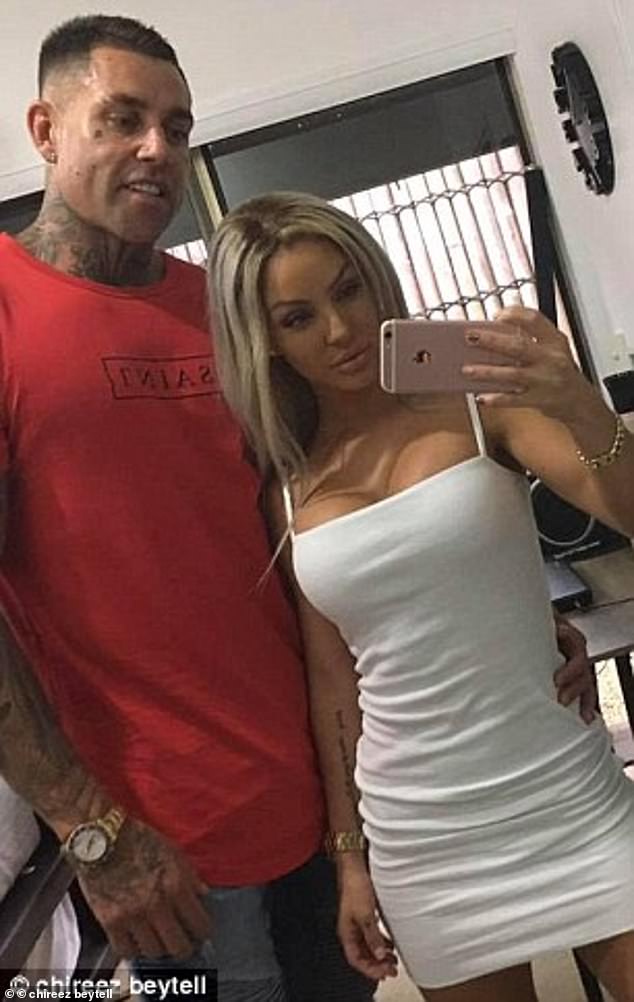 Liam Scorsese was shot in February 2018, after refusing to surrender a knife taken from the family home of his girlfriend Chireez Beytell (pictured together), an inquest into his death was told on Wednesday

‘His face was so angry – at that moment it was a completely different Liam,’ Mrs Erasmus told the hearing.

‘I closed the front door, Liam was screaming harder and harder, and I locked the security door.

‘Liam was banging on the door, he wanted her to come out. I told him “you need to leave”. I called my husband and then Liam started kicking the security doors – he was very, very angry.’

The family barricaded themselves inside and called police to force Mr Scorsese to leave.

‘If they (the police) want to come, they can come,’ Mr Scorsese reportedly told the family before stripping off his shirt and waiting on the mailbox.

Police constables Damon Till and Michelle Reed, arrived at the home moments later and shots rang out.

Detective Sergeant Dylan Brook who investigated the fatal shooting said Mr Scorsese was armed with a knife as he walked toward police.

The officers warned Mr Scorsese to drop the weapon and get on the ground, only for him to increase his pace.

Const Till hit Mr Scorsese in the chest with a Taser, but the 31-year-old ripped the wires from his body and continued to closed in on police.

In fear for his life and the life his partner, Const Till fired two shots bringing Mr Scorsese to the ground as he dropped the knife.

‘His actions were authorised, justified and legally defensible,’ Sgt Brook told the court.

‘Using the Taser first showed Constable Till’s reluctance to use lethal force against Mr Scorsese and it showed restraint on his behalf, particularly when faced with someone armed with an edged weapon or a knife.

‘He definitely attempted to use the minimum amount of force necessary to resolve the incident.’

Critically, a body-worn camera operated by Const Till failed to activate and did not capture the crucial moments of the shooting, the inquest was told.

After Mr Scorsese was shot, Constable Till and a neighbour, who was a nurse, applied first aid until paramedics arrived and took him to hospital.

He died an hour later.

An autopsy found the cause of death to be gunshot wounds to his chest and neck.

The inquest was told Mr Scorsese had struggled with drug abuse and mental health issues in the months before the shooting and told family he had been hearing voices.

Coroner Terry Ryan will explore whether the police response was justified and their use of body cameras after Constable Till’s unit failed to work.

He will also examine whether adequate mental health support was available to Mr Scorsese.