Donald Trump has told his cheering supporters in North Carolina that ‘the economy will collapse’ if Joe Biden is elected in November, warning that ‘mob rule’ will take over the United States.

Speaking in Winston-Salem on Tuesday night, the president enjoyed riffing off his familiar themes of chaos in Democrat-run cities and the mental stability of his opponent.

‘Biden’s plan is to appease the domestic terrorists. My plan is to arrest them,’ he said.

Trump said before China sent ‘the plague’ he was ‘sailing through an easy election’.

Trump also attacked Biden’s running mate Kamala Harris, saying it would be ‘an insult to the country’ is she became the first female president.

Harris is on the ticket as Biden’s vice-president pick. 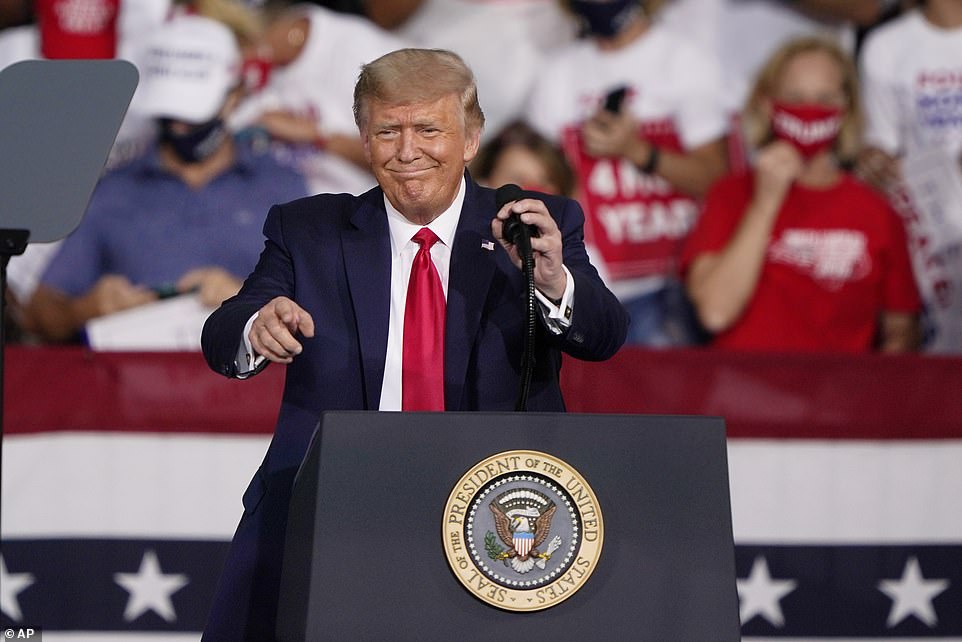 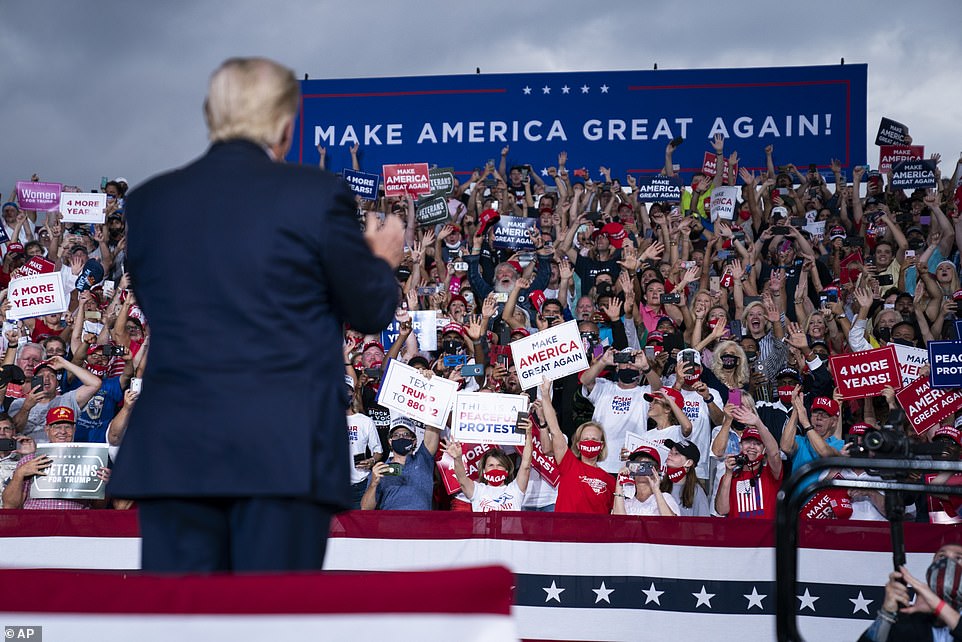 The president said he had been told 15,000 people were in attendance on Tuesday

Trump told the crowd that Biden claimed to be on the side of blue collar workers, but had ‘stabbed them in the back’ with his support for free trade.

The president said Biden was in thrall to China, and attacked him for his backing of the North American Free Trade Agreement – NAFTA. Trump has since repealed and replaced NAFTA with the North America Canada Trade Deal.

‘Joe Biden is weak, and he is always caving to China,’ he said.

‘Mexico is paying for the wall,’ he said. ‘Even though they don’t say it.

‘We’re going to put a toll booth at the border. And maybe do something with remittances,’ he said.

Trump said the wall ‘is almost completed’ and was ‘wired for every single thing you could have’.

As of August 7, work had been completed on 30 miles of barriers where none had existed prior to Trump’s presidency, according to U.S. Customs and Border Protection.

Funding had been identified for another 157 miles of new wall that is ‘in the pre-construction phase,’ according to the agency. 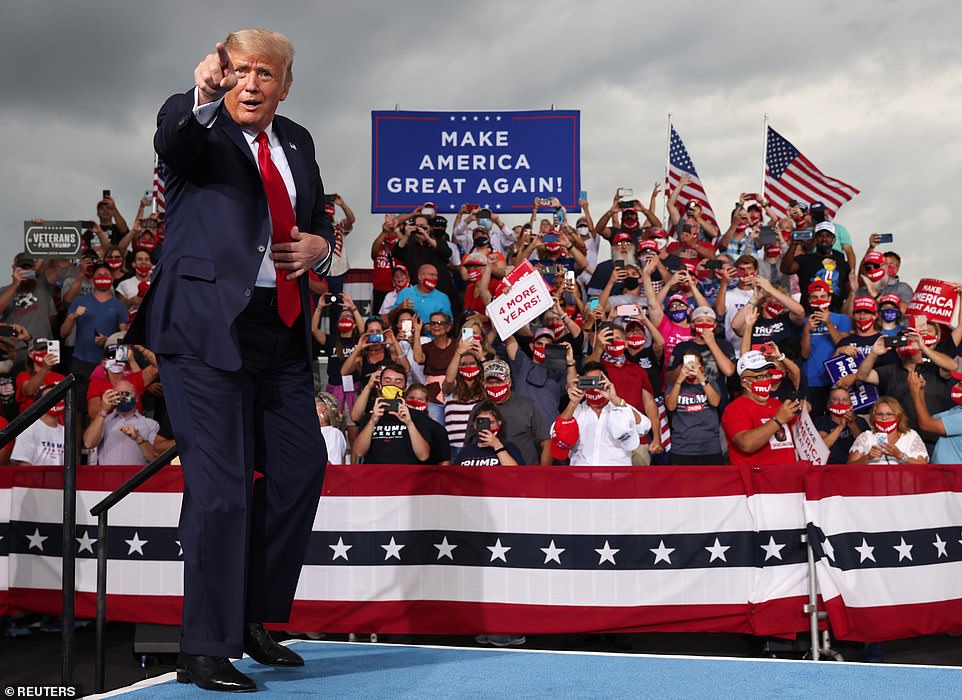 The president took to the stage in North Carolina at 7pm on Tuesday, whipping up his supporters into a frenzy 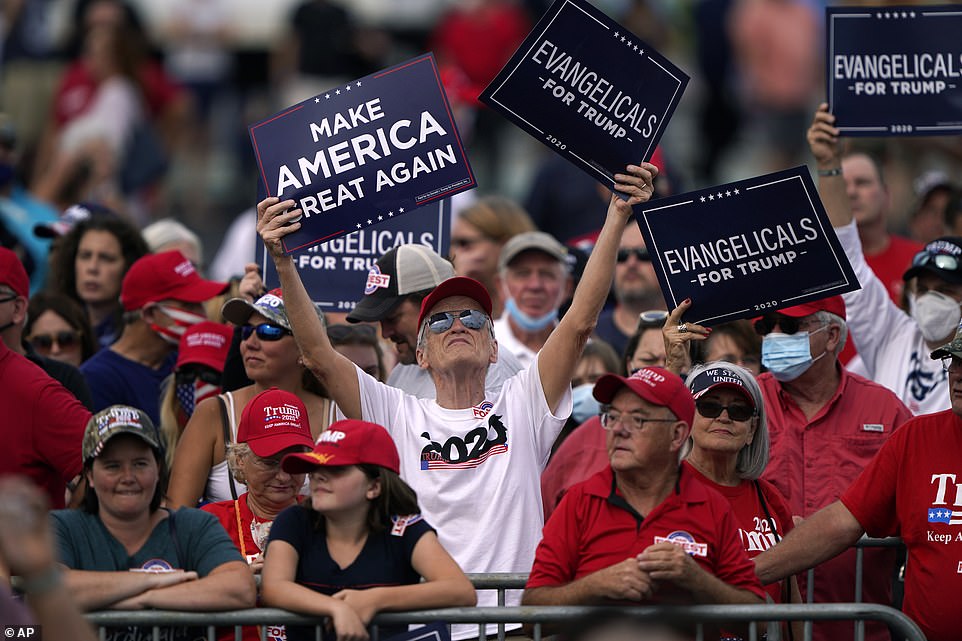 Fans of the president wore his campaign t-shirt and baseball caps, and held up signs proclaiming their support

He told his supporters that he had kept his promises, citing justice reform, ending NAFTA and pulling the U.S. out of the Iran deal.

‘We invested $2.5 trillion in the U.S. military and gave our great warriors a big pay rise.’

After Trump’s stop in Winston-Salem, two of his sons will also be campaigning for their father in North Carolina.

Eric Trump is expected to speak at a campaign event on Wednesday in High Point.

The following day, Donald Trump Jr. will be campaigning in Hendersonville.

‘You better elect me, North Carolina,’ the president said, to chants of ‘four more years’. 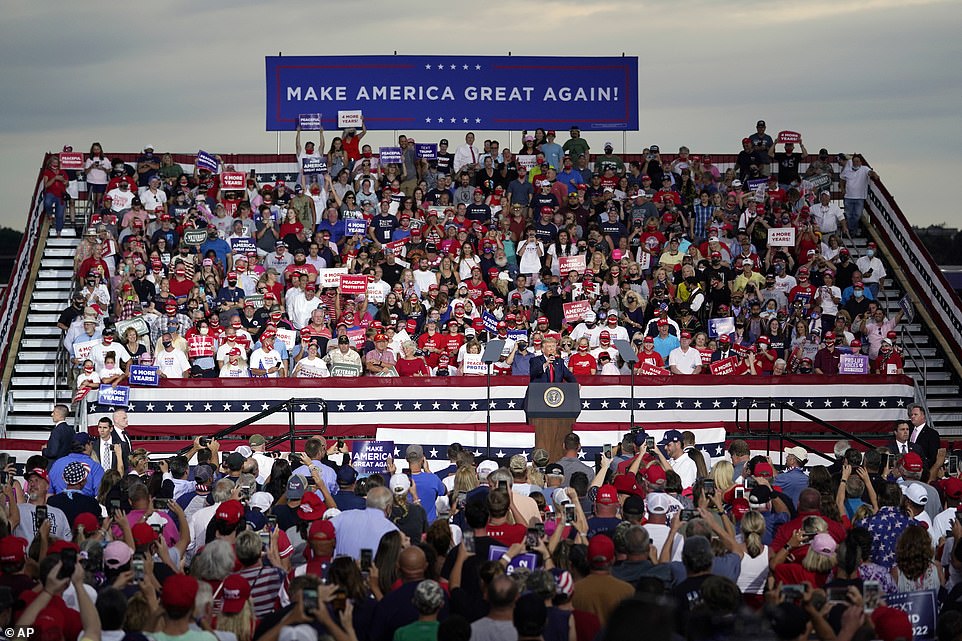 The president said that he had been told 15,000 people had gathered for Tuesday night’s rally 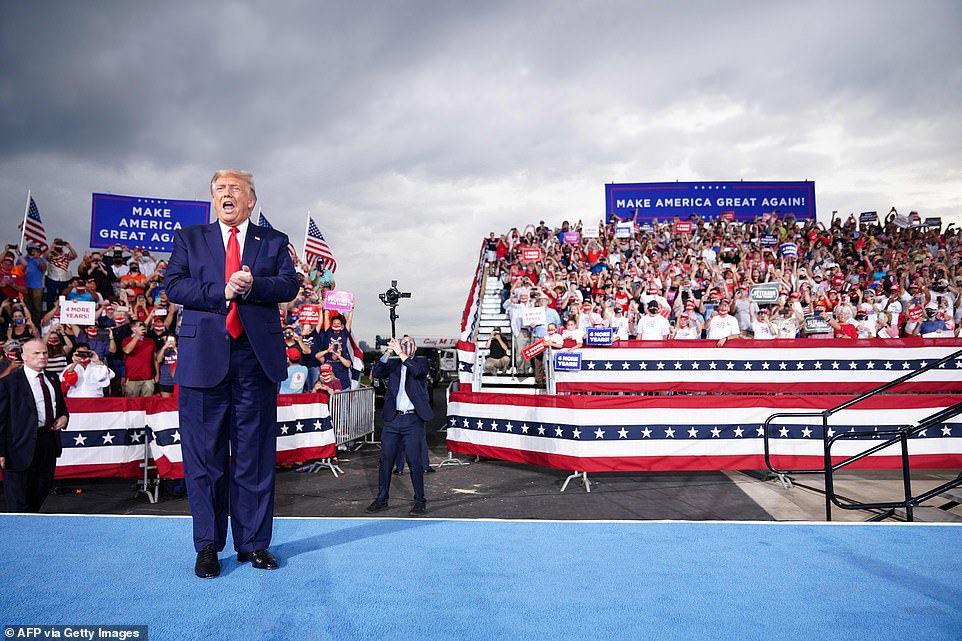 Donald Trump was back on the campaign trail on Tuesday night, staging a rally at Smith-Reynolds Regional Airport in 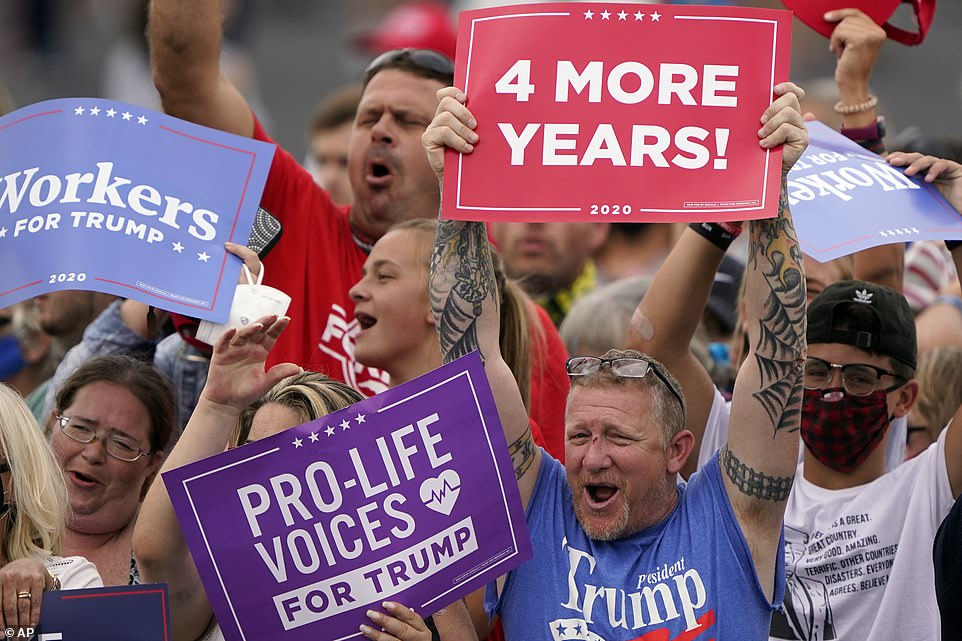 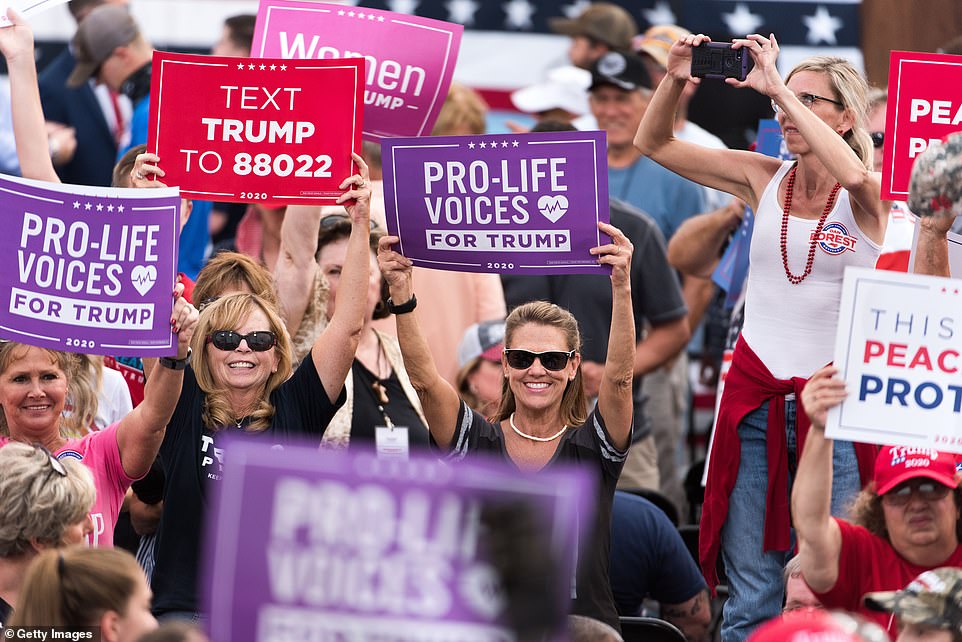 Trump celebrated his popularity with female voters on Tuesday night, and a group of pro-life women were showing support 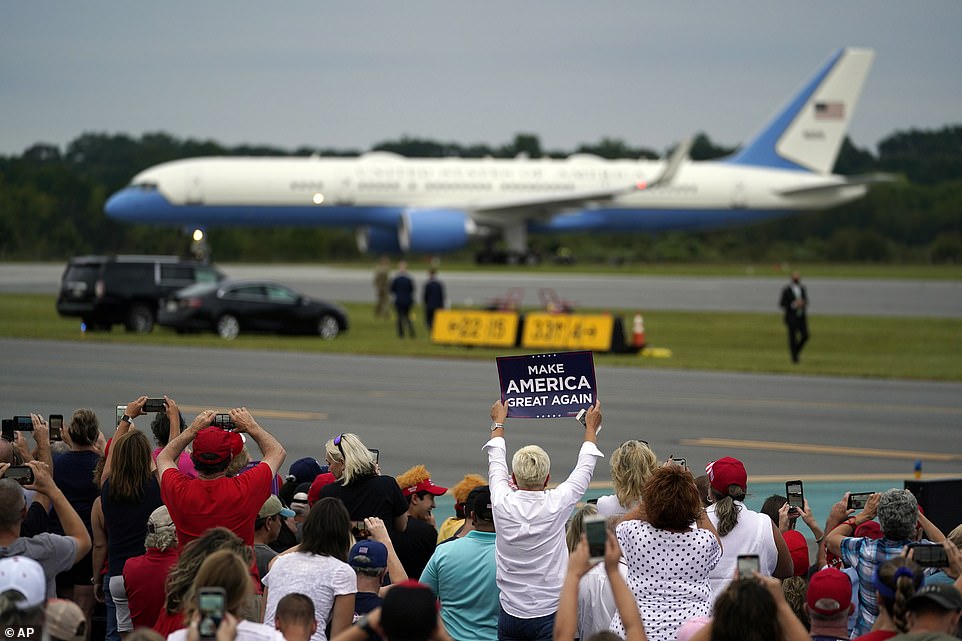