Chairman Dan’s Great Wall of Misery: Checkpoints, number-plate technology and police stationed in holiday towns will ensure Melburnians don’t escape their city prison – and those who do will be fined $4,957

Daniel Andrews has set up a ‘ring of steel’ around Melbourne to stop residents heading to regional Victoria where coronavirus restrictions have been finally relaxed.

Melbourne residents who dare to leave will be slapped with a $4,957 fine for breaching public health rules. 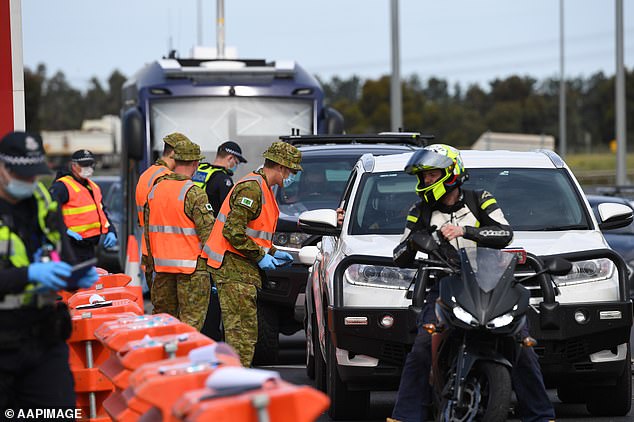 Daniel Andrews has set up a ‘ring of steel’ around Melbourne to stop residents heading to regional Victoria. Pictured: A checkpoint in Geelong

Officers say they will check cars with caravans and fishing rods as well as increase patrols at camp sites and national parks to catch any city residents who have escaped.

There will also be increased checks at popular holiday destinations such as the Mornington Peninsula where many well-heeled Melburnians have second homes.

On Wednesday major checkpoints were set up on the Princes Freeway at Little River heading to Geelong and the Calder Freeway near Sunbury on the way to Bendigo.

Premier Andrews is desperate to stop coronavirus spreading from Melbourne to the regions, which have suffered significantly fewer case numbers and were removed from lockdown on Wednesday night.

‘We’ve got to be inflexible on this.’ 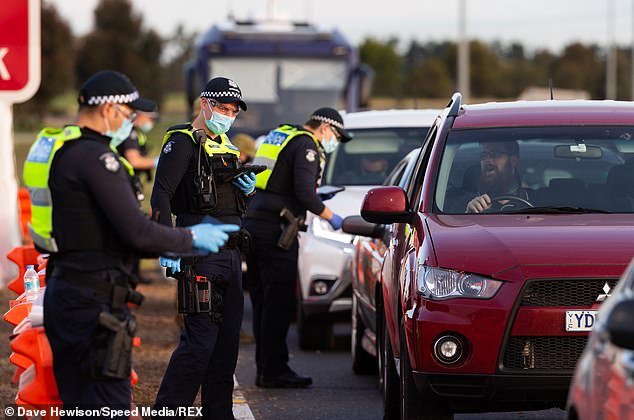 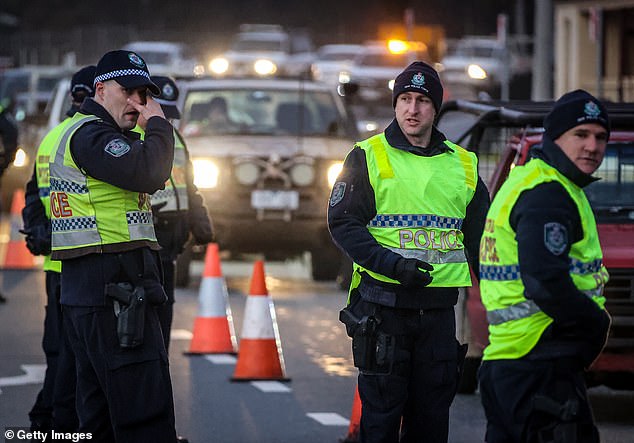 Officers say they will check cars with caravans and fishing rods as well as increase patrols at camp sites and national parks. Pictured: A checkpoint at Albury

Mr Andrews also asked pub landlords to check customers’ identification to make sure they are not from Melbourne.

‘If you’re not from regional Victoria, then you should not be at the pub, and that compliance will be very, very important,’ he said.

Under Mr Andrews’ road map out of restrictions, Melbourne will remain locked down until weekly average cases drop below five, which is not expected until October 26.

That would mean Melbourne’s lockdown would have lasted 15 weeks, a month longer than the lockdown of Wuhan, the Chinese city where the virus was first identified late last year.

For regional Victoria, the four reasons to leave home no longer apply, most workplaces are reopening and schools are returning with a staggered start.

Gathering limits have increased to 10 people outdoors and up to five nominated visitors from another household bubble.

Restaurants are operating with a cap of 10 seated patrons indoors and 50 outdoors.

Gathering limits have also increase to 10 people at weddings, 20 mourners at funerals and 10 people plus one faith leader at outdoor religious gatherings.

Children can also return to community sport and adults will be able to take part in non-contact sport.

Everyone in Melbourne must wear a mask when leaving home. Pictured: Residents at South Melbourne Beach

‘I am so, so pleased and proud of every single regional Victorian who has stayed the course, follow the rules and got tested.

‘There is no greater evidence to the people of Melbourne that this strategy, getting numbers low, is essential,’ Mr Andrews explained.

Melbourne took its first tentative steps out of lockdown on Monday, with those living alone or single parents allowed to have one visitor, outdoor exercise extended to two hours and the curfew’s start time pushed back an hour to 9pm.

What can regional Victorians do under relaxed restrictions from Thursday 17 September?

Outdoor gathering limits will increase to 10 people. That number does not include infants under the age of 12 months.

People in regional Victoria will also be able to leave their homes without restriction.

Limits for outdoor religious gatherings and weddings will increase to 10 people, while funeral limits will rise to 20 mourners.

Five visitors are allowed in a home from a nominated household.

Schools will return to normal operation over the first two weeks of Term 4.

Outdoor auctions will be allowed to have a maximum of 10 people in attendance.

Children can return to community sport and adults can take part in non-contact sport.