A self-proclaimed ‘dirty Batman’ came to the rescue of a neighbour tormented by continual dog muck outside their home – by leaving his OWN human waste at the offender’s doorway.

Sean Miller noticed a local resident in distress after they posted several signs condemning dog fouling so laid in wait to catch the culprit – then followed him and his two dogs home.

The 44-year-old then returned to the perpetrator’s flat in Hackney, East London, at 2am armed with a Sainsbury’s bag of his own faeces. 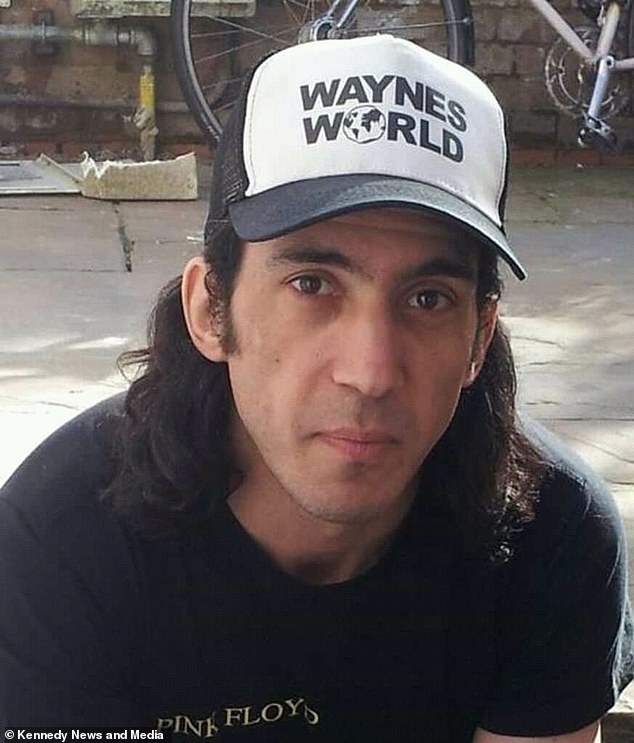 Sean Miller, 44, from Hackney, East London, noticed a local resident in distress after they posted several signs condemning dog fouling, so took matters into his own hands

Sean then laid his own waste out in front of the offender’s door, stuck a cocktail stick in it with a ranting message attached and a roll of poo bags.

The anonymous note explained how their thoughtlessness had been spotted and warned them to start picking up their dog’s poop ‘to avoid any further presents coming back’.

He shared a snap of his faecal deterrent to Facebook on Wednesday boasting ‘there has been no dog poop spotted’ in the neighbour’s front garden since the stunt in July and later labelled himself a ‘hero’.

Sean, from Hackney, East London, said: ‘Obviously my neighbour’s signs didn’t deter the person [from letting his dogs go to the toilet outside his house].

‘So one night I saw the man, followed him to find the block he lived in and I marked that down. 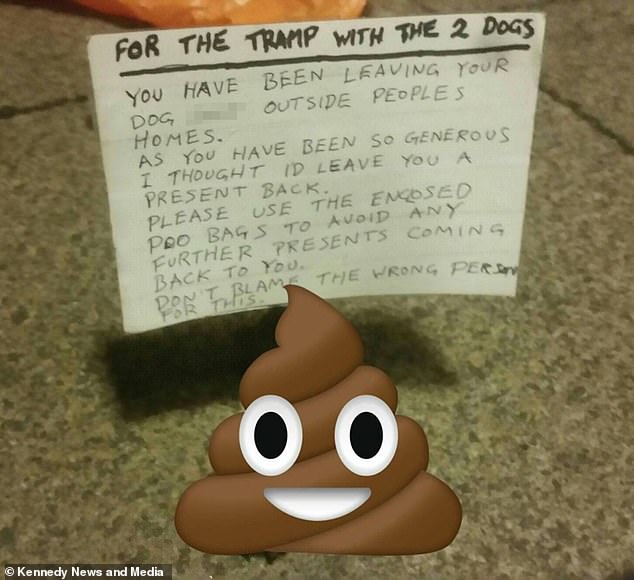 The 44-year-old followed the perpetrator home and left a Sainsbury’s bag of his own faeces on the dorstep at 2am, along with a handwritten note telling him to clean up after himself in future

‘I checked there was no CCTV because you wouldn’t want to be caught doing something like that, and then I knew it would look pretty normal wearing a mask like a ninja now anyway.

‘Then one night after having a nice meal, I let one out. It wasn’t as impressive as one of my usual ones, but I left it there [outside their door along with] the poo bags so they had no excuse.

‘I felt like a bit of a hero afterwards, and it’s a bit like I’m Dirty Batman, you know ‘clearing the streets of dog sh*t one sh*t at a time’.

The message on the note left with his waste said: ‘For the tramp with the two dogs.

‘You have been leaving your dog sh*t outside people’s homes. As you have been so generous, I thought I’d leave you a present back. 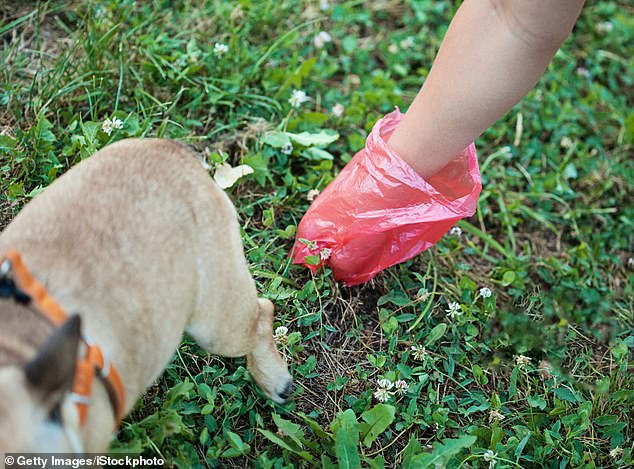 ‘Please use the enclosed poo bags to avoid any further presents coming back to you. Don’t blame the wrong person for this.’

Sean said soiling the offender’s shared entrance meant there could have been a ‘few innocent people’ affected by the stunt.

However he hopes they’d notice who owned the dogs and pass his dirty sentiments on.

After trying to alert the original victim of the dog muck of his revenge, Sean was dismayed to find the resident didn’t answer the buzzer but vows to mention it if he ever bumps into them.

Sean shared a photo of his feces censored with a poop emoji, and explained how seeing his neighbour’s signs led to him to carry out his mukky deed.

The 44-year-old, who lives two minutes away from the culprit, added he’d been a victim too, but the target was often an unused bushy area, so it was not affecting him as much. 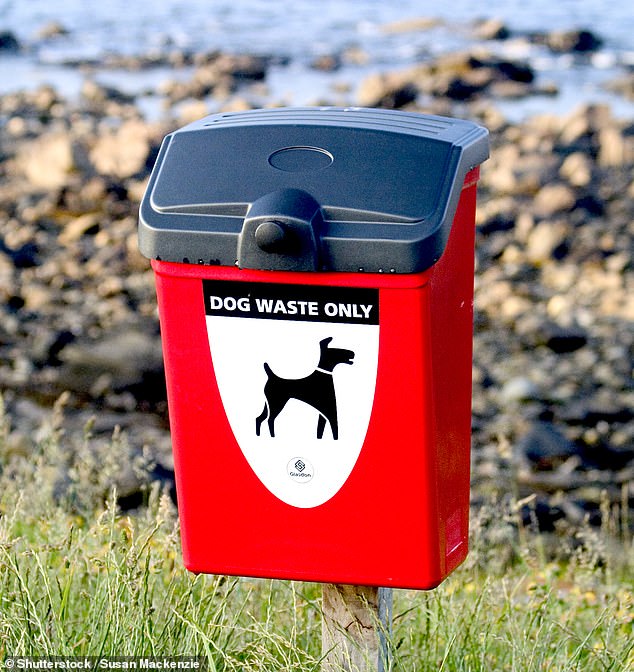 Sean’s post said: ‘For a while there has been someone on my road that lets his dogs sh*t outside someone’s house on my road and doesn’t pick it up.

‘They do it at the front of my place too, but it’s on a bushy bit that nobody really goes on, so it doesn’t really affect me or my neighbours.

‘But this person that lives in the other place has been putting more and more signs up saying ‘not to let your dogs foul (sh*t) here’ and then pictures of the dog in the red circle. And there’s always sh*t at the front of his house.

‘So about a week ago I wrote a note on a bit of card, stuck some doggy poo bags to it and made a home made present. 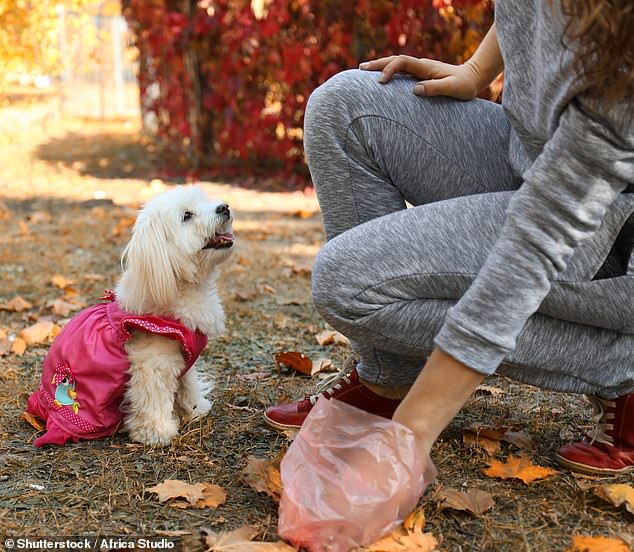 Sean shared a photo of his feces censored with a poop emoji, and explained how seeing his neighbour’s signs led to him to carry out his mukky deed

‘I placed the present outside the dog owners door, put the card with the poo bags on a stick and stuck it in the present.

‘I took a photo. I censored the real present with an emoji of the same thing. I don’t want to make a habit of putting photos of my personal wastage on social media.

‘But I am curious. Was it a bad/wrong thing I done? There was nobody to talk normal sense to me at the time.’

Some Facebook users showed support for his dirty revenge, and one was even surprised he didn’t go a step further.

Gill Bolus said: ‘Well done Sean! I think you showed great restraint tbh. If it happens again just post the turd back through their letterbox lol.’

Lee Perkins Diesel said: ‘Fair play Sean. It is antisocial and illegal for dogs owners not to clean up after themselves. Could [have] been worse you could have reported them to the council.’

‘The reason I could never get a dog is I can’t stomach watching people do the responsible thing and clean up their mess let alone do it myself!’