OOOH ARRRR! Rusty-looking USS Kidd hoists a skull and cross bones in honor of its pirate namesake on return to port – exercising its right as the only US warship allowed to fly the flag

The USS Kidd has returned to its homeport in Washington following a five-month deployment to the Eastern Pacific.

The Arleigh Burke-class destroyer pulled into Naval Station Everett on Monday after setting out to sea in April to assist in a counter-narcotics operation.

The warship drew attention on social media after viewers took note of the large pirate flag on its mast, as well as its notably rusty appearance.

The black and white flag containing an image of a skull and crossbones, also known as a Jolly Roger, has been long associated with pirates dating back to the 18th century.

During the First World War the flags became popular among submarine crews, particularly in the UK Royal Navy, as a symbol of a successful patrol or naval operations. 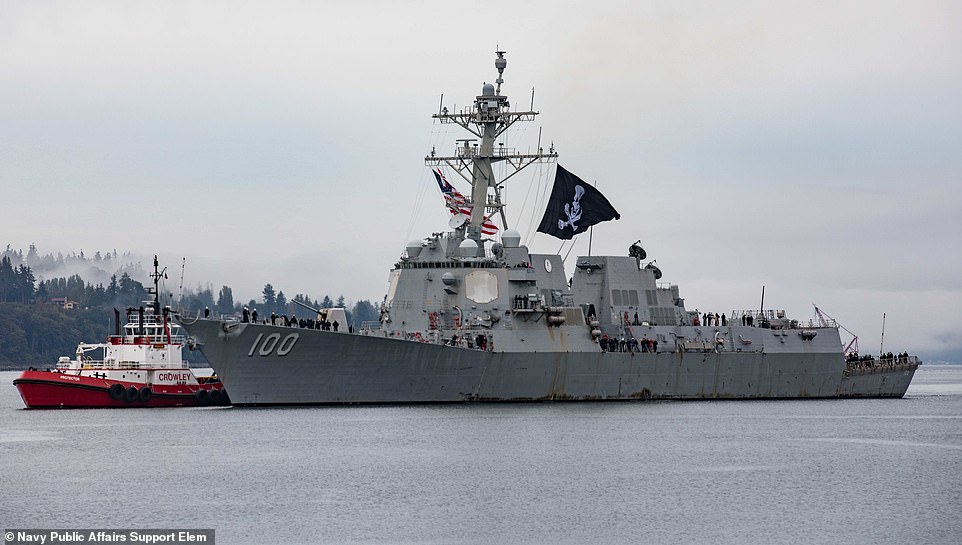 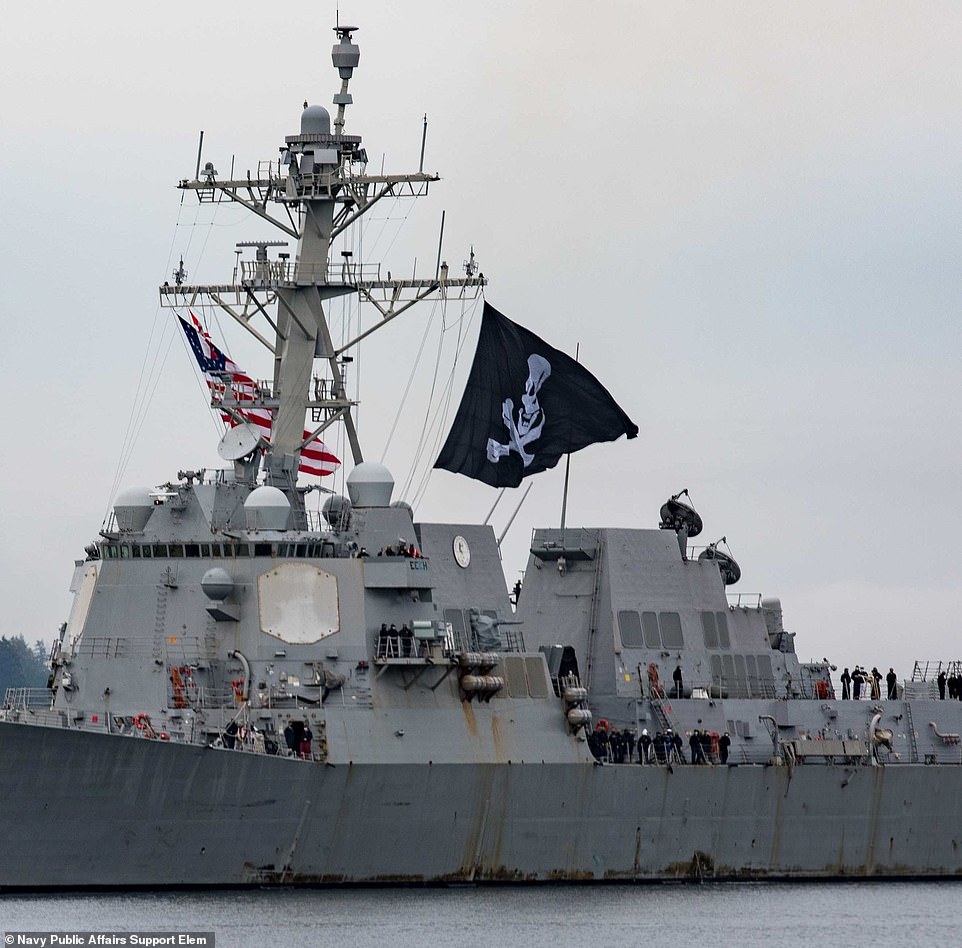 The ship pulled into Naval Station Everett flying a pirate flag, also known as a Jolly Roger. It is the only U.S. Navy ship authorized to do so

But for the US naval ship, the flag represents its connection to its namesake which is both in reference to WWII Rear Admiral Isaac Kidd and Scottish sailor and pirate Captain William Kidd, according to The Drive.

It is the only ship in the Navy authorized to fly it.

Admiral Kidd was killed on battleship USS Arizona during the Japanese attack on Pearl Harbor in 1941.

Two years later, a Fletcher-class destroyer (DD-661) was named after late admiral Kidd, but the ship’s crew had already adopted the Scottish captain as its mascot.

William Kidd was executed for piracy in England in 1701 after returning from a voyage to the Indian Ocean.

It was later learned Admiral Kidd had been nicknamed ‘cap’ in reference to the Scottish sailor during his time at the Naval Academy.

The crew then sought permission from Kidd’s widow to have the pirate flag painted on the ship’s smokestack and to fly the Jolly Roger. 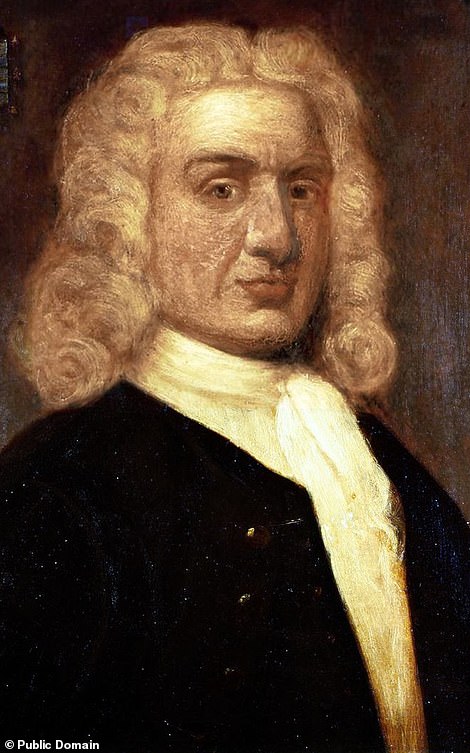 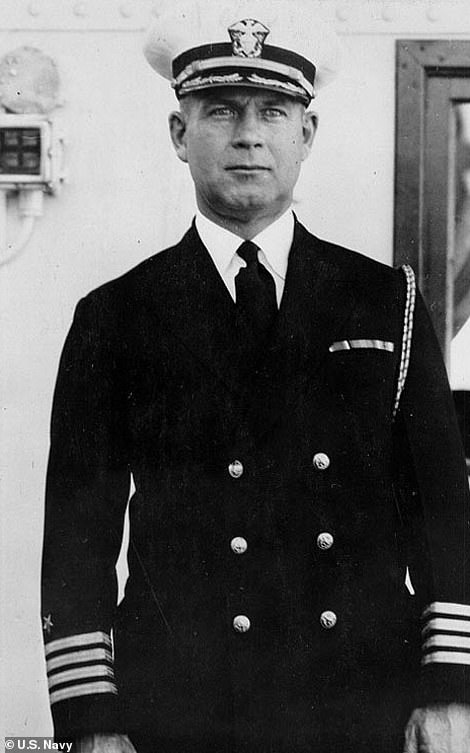 The current USS Kidd is the third US Naval ship to be commissioned under that name, which is in reference to both WWII Admiral Isaac Kidd (right) and Scottish sailor Captain William Kidd (left) who was executed for piracy in 1701

The DD 661 sailors subsequently were recognized as the ‘Pirates of the Pacific’, and were known for rescuing pilots and aviators during the war.

The USS Kidd was decommissioned and returned to service by the Navy several times until 2007, when the current Arleigh Burke-class destroyer was named after the admiral and remains in service.

Earlier this year the US naval ship made headlines after it became the second to suffer a COVID-19 outbreak aboard while at sea.

At the time the USS Kidd had been involved in a counter-narcotics operation in the Eastern Pacific on April 22 when the first sailor was reported to be exhibiting ‘influenza-like symptoms’. 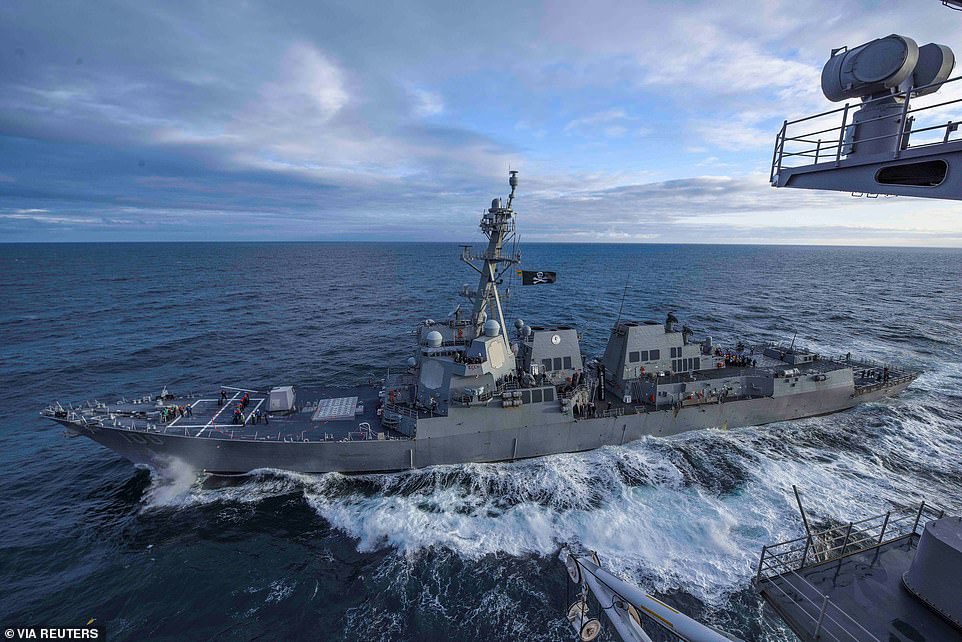 The warship had set out to the Eastern Pacific in April to assist in a counter-narcotics operation. It was forced to dock in San Diego weeks later after suffering a coronavirus outbreak on board

The following day, an Abbott testing machine was brought aboard the ship by a team of eight doctors who then began screening the crew.

Within the days that followed cases of COVID-19 began multiplying rapidly on-board, forcing the ship to head to port in San Diego and evacuate its most afflicted sailors.

The Navy said that 63 percent of the Kidd’s crew of more than 300 had been tested.

It came after the USS Theodore Roosevelt became the first deployed US warship to suffer an coronavirus outbreak.